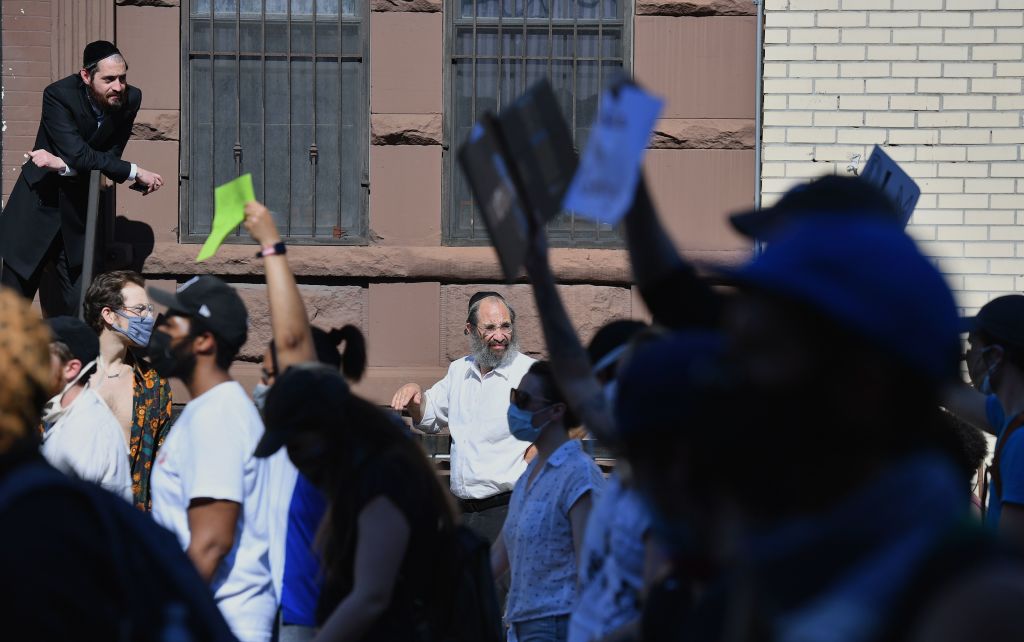 Members of the Orthodox Jewish community watch as protesters walk through the Brooklyn borough on June 3, 2020. (Angela Weiss/AFP via Getty Images)
Advertisement

The next morning, Orthodox Jews in the same New York neighborhood showed up at the local police precinct to drop off pastries for the officers – 101 danishes for the 101st Precinct.

The principal of the Hebrew Academy of Long Beach’s lower school, Altabe sees no contradiction between Orthodox Jews participating in a march against police misconduct and their sugary goodwill gesture the next morning.

“We wanted them to know that even though we support the protests, we also supported the police and we’re grateful to the police and the work they do,” Altabe said.

The two gestures – opposing police misconduct while supporting the police more generally – are emblematic of the fine line Orthodox Jews have navigated in responding to sweeping protests sparked by the killing of George Floyd at the hands of white Minneapolis police officers.

“Many Orthodox Jews have had negative interactions personally with the police and have seen others who have and certainly understand and are sympathetic to the idea around police accountability and reform,” said David Greenfield, a former New York city councilman who now leads the Met Council, a Jewish nonprofit serving needy New Yorkers. “At the same time, however, they are generally supportive of the NYPD because they’re generally concerned about public safety and the looting.”

Orthodox Jewish communities are both more politically conservative and more inward-focused than non-Orthodox Jewish communities in America. That dynamic was on display this week in the flood of statements from Jewish organizations weighing in on the protests and the societal conditions they aim to upset. While some organizations were quick to respond with detailed descriptions of proposed policy changes and pledges to work toward them, Orthodox organizations were slower to weigh in, vaguer in their visions and made a point of condemning the violence that unfolded at some of the protests.

In a statement Thursday, the National Council of Young Israel, an umbrella group of Orthodox synagogues, said Floyd’s killing showed that “racism is regrettably still alive and well in our country” and that it is critical that “the grave danger posed by systemic racism is duly addressed once and for all.” But the statement also noted that most law enforcement officers are “heroes” who risk their lives to protect ordinary citizens, regardless of skin color.

“These honorable officers should not be attacked or tarnished by the misconduct of others; however, it is essential that an effort be undertaken to remove any police officer that does in fact exhibit a degree of racial and ethnic bigotry,” the group said.

The Orthodox Union and the Rabbinical Council of America, the two principal national organizations representing Modern Orthodoxy, both condemned Floyd’s killing and expressed support for peaceful protests against racism while condemning the violence and looting. Agudath Israel, which represents haredi Orthodox communities, did much the same, though the Agudath statement did not use the word “racism.”

“Like all decent Americans, we are horrified by the senseless and ruthless killing of George Floyd, and we join in solidarity with the outpouring of hurt, anger and frustration expressed by responsible citizens protesting peacefully,” the group said. “We are also greatly saddened by the frightening scenes of innocent bystanders and store owners under siege, threatened by violence and mayhem, and facing the prospect of lost livelihoods and uncertain futures.”

Several Orthodox politicians in New York put out statements to similar effect, supporting peaceful protests and condemning the death of George Floyd without directly criticizing the police. But some also spent several days questioning why protesters were allowed to gather en masse while religious gatherings are still restricted because of the coronavirus pandemic.

On Tuesday, Simcha Eichenstein, a state assemblyman representing two heavily Orthodox neighborhoods in Brooklyn, and Kalman Yeger, a New York City councilman, sent a letter to Gov. Andrew Cuomo saying that the protests are evidence that the time for lockdown had passed.

“Protesters are gathering, perhaps well-meaning, but surely with little regard for social-distancing standards. It has also unfortunately brought out rioters who are destroying what is left of our economy, eviscerating the life’s work of our fellow New Yorkers,” they wrote. “The lockdown may not have formally ended, but the calls for mass peaceful marching without any regard for social-distancing have rendered a continual lockdown at this point ludicrous.”

Eichenstein also tweeted in frustration over the different rules regarding protests and religious gatherings.

“Sure, protesters have the right under the first amendment to march against racism, which needs to be confronted head on in this country, but the same first amendment guarantees religious people the right to practice their faith,” he wrote in response to a statement by the mayor at a press conference.

By Thursday, Eichenstein’s focus had shifted. He placed a sign in the window of his Borough Park office with the words George Floyd repeated before his death, “I can’t breathe,” in large print. He also expressed mourning and solidarity with the black community in a video Thursday. “As a Hasidic Orthodox Jew, my message is we, the Orthodox Jewish people, stand with you in solidarity, we must eliminate hate wherever it exists,” Eichenstein said.

The city council’s Jewish caucus, chaired by Orthodox city councilman Chaim Deutsch, put out a statement Monday expressing solidarity with the black community but without mentioning the police. And in a letter to constituents Thursday, State Senator Simcha Felder called George Floyd’s death an “act of pure evil,” saying that to ignore the message being sent by the black community about continued discrimination would be “unconscionable.”

But Felder also condemned the looting and violence against police officers.

“So let’s protest what we see is wrong and let’s inspire change without vilifying every member of the NYPD- they are people, too. Let’s not trade one evil for another,” he wrote.

Devorah Halberstam, an activist on anti-Semitism in Crown Heights who frequently speaks to new police recruits as part of their training, said the statements this week reflect the Orthodox community’s priorities.

“I think most people feel that people have a right to protest,” Halberstam said. “However, people are just concerned about safety and everyone wants to feel that they’re safe and that their stores are safe, their communities are safe.”