White Jews have been able to flee to the suburbs. Black Americans largely could not. Here’s why that matters today. 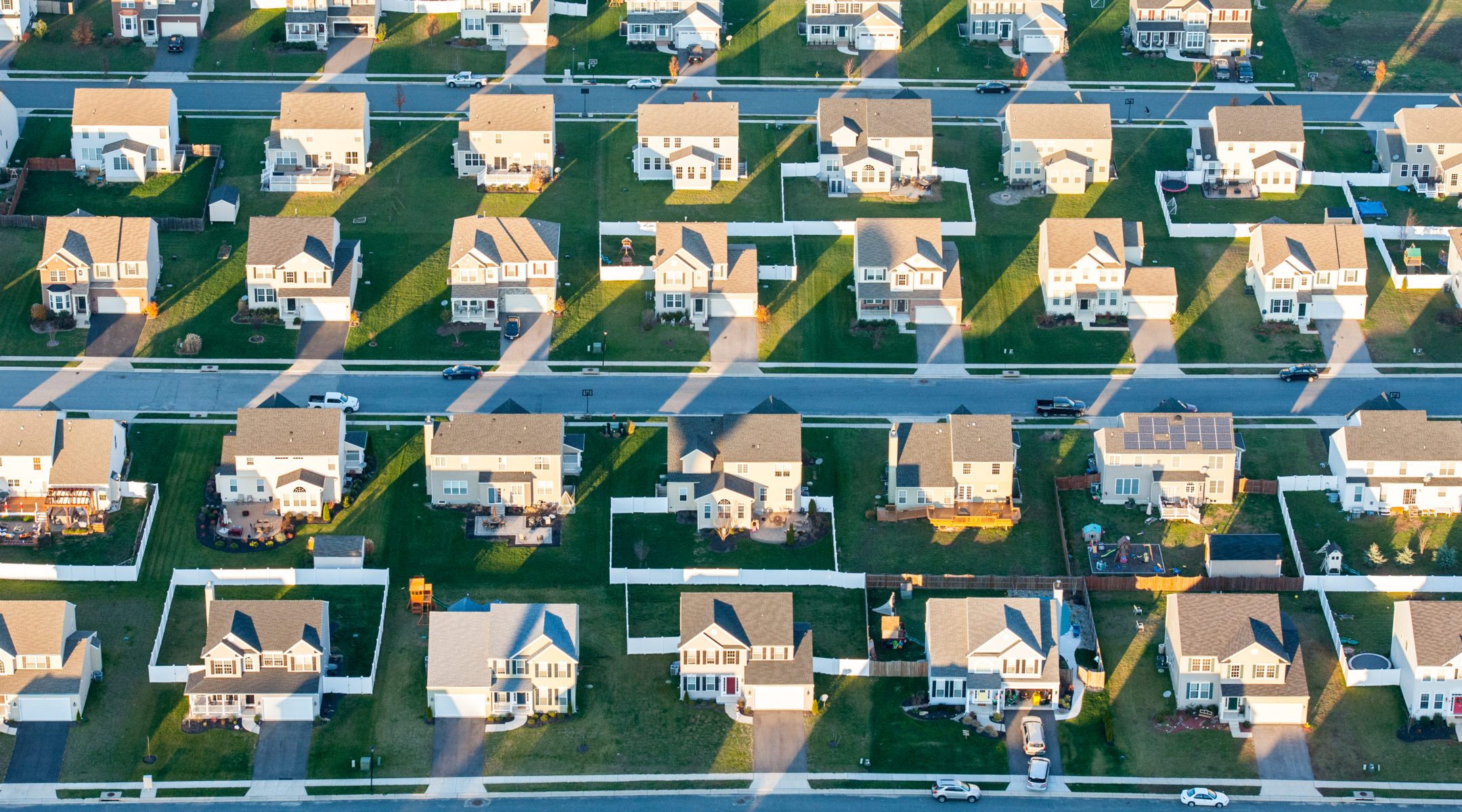 CLEVELAND (JTA) — I turned on my phone and felt an overwhelming sense of frustration, sadness and hopelessness. While I had been enjoying two days without electronics in observance of Shavuot and Shabbat, cities across the country were engulfed in a combination of civic protests and police riots. Weapons of war were being used against citizens within their own state. It was horrible to watch. I could not sleep the entire night.

I thought my technological disconnect was the source of my unrest. But I soon realized that it wasn’t just two days of not knowing that spurred my unease. It was that despite my close proximity to the chaos as the crow flies, I live in a totally different universe.

I work, study and spend a lot of time in the city of Cleveland, but my residence in the Orthodox community is technically outside of the municipal boundary. Like Jewish communities across the country, most Jews in the Northeast Ohio area live outside of the central city — and have for generations.

Though my drive into the city isn’t long, my neighborhood could be a world away. There was no police presence on Saturday. With COVID-19 still rampant, my only human interactions have involved socially distanced “hellos” with a few Orthodox families nearby. And while I saw many cars driving toward Cleveland, I had no idea that they were doing anything outside of their ordinary weekend activities.

“You’re lucky,” a friend in another city told me on Saturday night. “Most of us have been watching this unfold for days.”

He was right. It was a privilege to be able to remain unaware. And it’s one that countless light-skinned Jews experience every day.

American Jews know firsthand the effect of segregation efforts in our country. Early immigrant Jewish communities were restricted to small enclaves in American cities, usually in housing that left much to be desired. The Lower East Side of New York, the Boyle Heights neighborhood in Los Angeles, Cleveland’s east side — Jews moved into these communities because they could not afford to live in and were not welcome in other areas of the city.

But for European Jews, these spaces served as economic and communal incubators. They allowed Jewish communities to establish social support systems and slowly move out of these spaces to wealthier, whiter, more resource-rich ones.

Following the Great Migration in the early 20th century, cities in the Northeast and Midwest were filled with racial tensions. In 1917, the Supreme Court determined that cities could not explicitly limit Black migration to their areas. However, far from eliminating segregation, the new practices that developed over the 20th century only hid it more deeply. Indeed, several simultaneous efforts created two very different realities: disinvested Black cities and wealthy, white suburbs.

First came Euclidean zoning in 1926. In a landmark Supreme Court case, cities were granted the right to design a built environment segmented by uses. Homes could be confined to one corner of a city, manufacturing plants another — or not at all. Cities began to use this power to restrict new housing and development. Shortly thereafter, Franklin Roosevelt signed the National Housing Act into law, spurring banks to create maps of regions and determine which areas were considered valuable. The subsequent redlining efforts limited the ability of those residing in Black neighborhoods to secure loans for mortgages. And even those who could secure a mortgage faced the likelihood that a home they were interested in might have a racially restrictive covenant that bound the homeowner to sell only to a white person.

Then, in 1948, these covenants were finally deemed unconstitutional — forcing racism to move even deeper into the private systems of housing. Real estate agents, looking to capitalize on anti-Black sentiment, engaged in blockbusting efforts — convincing white residents of neighboring communities to sell their homes for cheap before the neighborhood was occupied by Black families, only to then resell those homes at exorbitant prices to incoming Blacks. The Federal Highway Act of 1956 dedicated billions of dollars to infrastructure focused on expanding regions to accommodate new housing in areas that Black homeowners could not reach or were not welcome. As a result, Black families remained stuck in the city or, if they were lucky enough to leave, half a century behind on the wealth-building efforts to which white families had easy access.

These racist attempts to prevent Black migration were still only more deeply hidden following the Fair Housing Act of 1968 and the Community Reinvestment Act of 1977. Though unable to legally engage in overtly prejudicial practices, banks, political actors and individuals used private, public and interpersonal systems to maintain segregation. Building on the directly racist practices of the past, space became a proxy for race. City planning and zoning efforts, the delivery of public goods and lending practices — all became mechanisms to sustain racial segregation by targeting spaces where Black communities live and using the systems that control migration and housing security to limit Black mobility.

Indeed, research on my own county has shown that there is continued racial biases in lending, that zoning efforts serve as a proxy for racial discrimination, and that landlords more frequently choose not to rent to individuals who are domestic violence survivors, Section 8 Housing Choice Vouchers holders and members of the LGBTQ community — all contemporary proxies for racial discrimination. These practices are not specific to my state or region and have been observed across the country. They persist, despite the illegality, because the foundational racist practices were never eliminated.

While anti-Semitism remains, the era of “No Dogs or Jews” is over. When they go to apply for a mortgage, to rent an apartment or to access social services, European Jews do not have to check a demographic box other than “white.” And for all intents and social purposes, we’ve secured many of the benefits of our WASPy suburban neighbors.

As a result, we have gained the privilege to access white spaces in a way that Black people have not.

The neighborhood in which you live determines your quality of life: the ability to avoid violence, attend high-quality public schools, live near parks and greenery. Throughout the country, because of racial prejudice and discrimination, Black individuals have less access to these experiences.

But more than that, the ability to be one’s whole self — to express your views, beliefs, culture and personal freedoms — is not equally dispersed. The actions of Black families and individuals are prejudicially policed and perceived with scrutiny, especially in suburban neighborhoods. Driving a nice car, laughing loudly, playing in a park — Black individuals often cannot partake in these with as much freedom as their white counterparts.

Even in my very visibly religious community, we face little backlash for our presence or our way of life. Time and again, I’ve seen my community not only unquestioned but courted.

The Jewish community in my area does not live in fear of how we conduct ourselves in our streets. We can dance with a new Sefer Torah from one end of the neighborhood to the next with a police escort in tow. Our holy sites are often protected —  not threatened — by police presence. Public services are extended and enhanced for us when our holidays occur. No one calls the cops when our kumsitzes go late or we sing from our sukkahs. Outside of small, snide interpersonal comments, there aren’t any major structural efforts limiting our ability to be publicly Jewish without significant pushback.

I know this is not true. Our ability to be who we are in our neighborhoods is not a right that is extended to all people. Our capacity to utilize local resources without backlash or fear is not accessible to others. And our sense of trust in protective services is not universally shared. Our sheltered communities are a societally supported privilege.

I’ve had countless conversations with my fellow Jews about this topic, and they’ve often been difficult and heated. But today — as we all once again feel the immense weight of racism in this country — I am asking my light-skinned Jewish friends to sit with this and think more deeply about the ways that we experience the cities we live in. We are given the privilege to exist in white spaces — to gain from the resources, opportunities and protection that these spaces afford.

Decades ago William Levitt, the man responsible for the creation of the model suburban city, famously noted, “As a Jew, I have no room in my mind or heart for racial prejudice. But I have come to know that if we sell one house to a Negro family, then 90 to 95 percent of our white customers will not buy into the community. That is their attitude, not ours.”

Whether it is our attitude or not, it is and should be our concern. As Jews we rely heavily on mutual support from others and look to other groups for allyship. Today we must recognize our spatial privilege and advocate for change. Demand systemic shifts, not policy Band-Aids. Dismantle even the hidden institutions of racism. And work tirelessly toward eradicating all bigotry, once and for all.