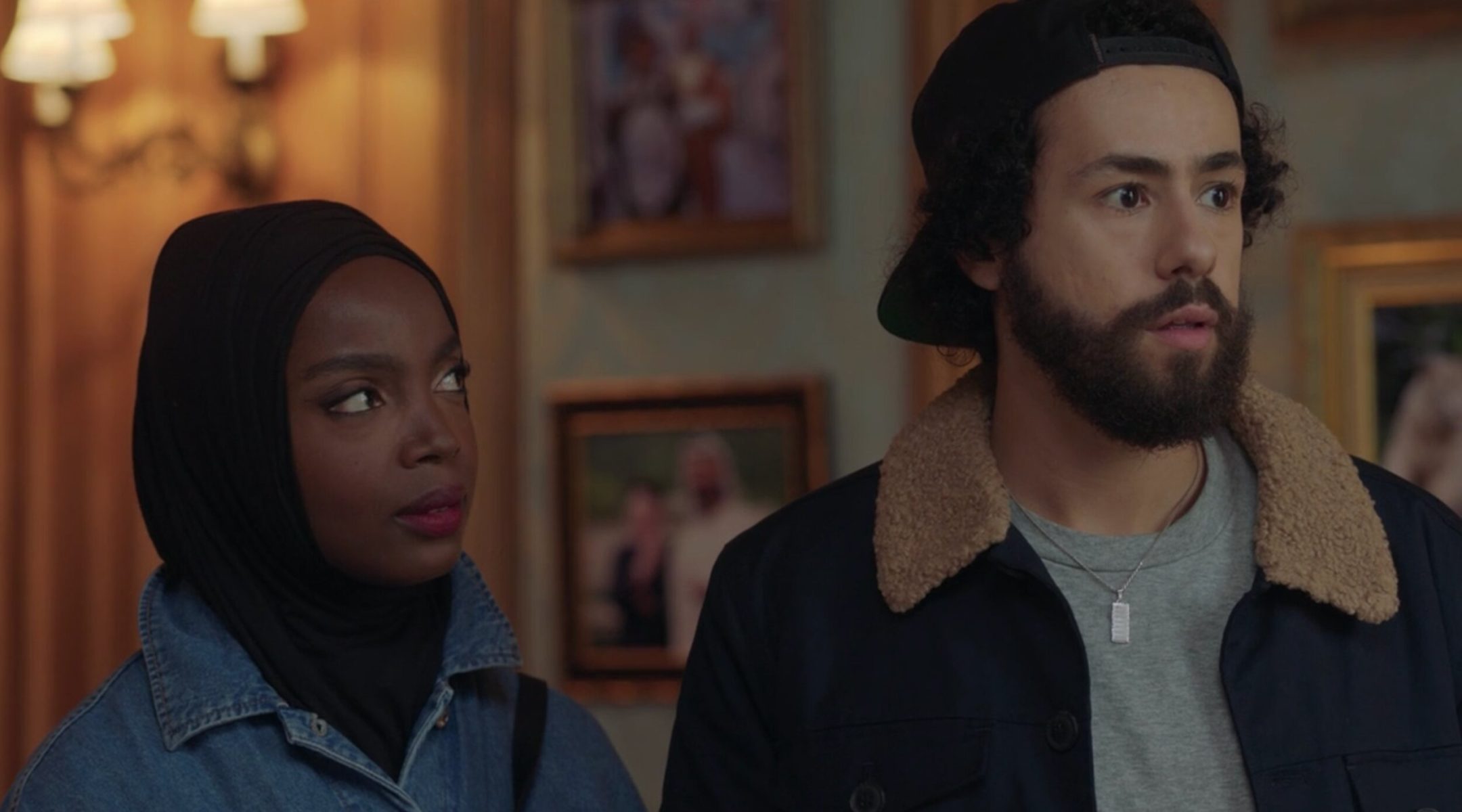 Ramy Hassan (played by Ramy Youssef) and Zainab (played by MaameYaa Boafo) in a scene from the second season of the Hulu show “Ramy.” (A24)
Advertisement

Social distancing and staying inside is hard. Thankfully, accessing good things to watch during this time is not. This is the 11th installation of a weekly column on Jewish movies and TV shows that you should stream in quarantine.

There are no specific spoilers here, though there are broad thematic ones.

NEW YORK (JTA) — The ink had not yet dried on my color-coded, scheduled-by-the-hour Shabbat plan when my phone chimed.

“I think we’ll be returning from LA Friday morning in the end. Ok if we join for Shabbos lunch?”

I sighed. My intimate four-person meal had grown to an eight-person Shabbat lunch in an instant.

I quickly shelved my dream of a proper eight hours of sleep, set my Spotify to rousing Hasidic  music, and got to work transforming vegetables, oils and spices into mezze that would hopefully round out the meal.

The rhythms of religiously observant life are misunderstood, even to those inside of it. It is not about dogma, nor about checking off a series of obligations and avoiding violations. For the individual, it requires a slow ego death.

“Homo religious is a romantic who chafes against concrete reality and tries to flee to distant worlds that restore his spirits with their purity and pristine clarity,” Rabbi Joseph Soloveitchik wrote in his 1944 book “Halakhic Man.” “Halakhic man, however, takes up his position in this world and does not move from it. He wishes to purify this world, not to escape from it.”

An observant life does not scoff at transcendence, nor at secular wisdom. But it views the individual’s role not as enlightening the self, but as bringing transcendence into the real world around them. To the Orthodox, this is the meaning of existence itself, and the power by which we change our world. In 2020, living this way is more challenging than ever.

I have found myself describing the show to friends as a portrait of “a Modern Orthodox Muslim” — referencing Modern Orthodox Judaism, the broad term for the movement that mixes Jewish law and tradition into the modern world. Ramy doesn’t drink or do drugs, he prays five times a day, he fasts on Ramadan. He struggles to refine his beliefs and balance his culture with his modern ethic. He believes premarital sex is wrong and has it anyway — leaving a trail of increasing destruction as he goes.

The show will feel familiar, if not intimately so, to American Jewish audiences — especially Modern Orthodox ones. It has the Middle Eastern cultural touchpoints, the superstitions, the feeling of being too American for your family and not quite American enough for your fellow Americans, the quasi-Birthright trip to Egypt, the pick-and-choose approach to religious law, the zealous convert characters, the search for meaning and the newly religious who take it upon themselves to criticize others for choices they themselves would have made only months ago.

“I don’t want desires. I don’t want anything. I just want God,” Ramy says in one episode after having a particularly rough go at it. But as his sheikh Ali Malik tells him in another context, “Islam is like an orange — the rind without the flesh is bitter and useless. The flesh without the rind will wither and rot.” Rules preserve us. But rules are far from what it’s all about.

“Ramy” thus provides us with a lens into the full range of challenges of a modern religious life. It’s not easy to find a community, to battle one’s baser instincts, to juggle being the “other” while also blending in too much for the liking of earlier generations and having friends that don’t share your path. It’s hard today to give back to others in a selfless way, to find a mentor, to find a partner with the same values.

Herein lies the paradox: observant religious life, whether Muslim or Jewish, requires a lot from the individual. But ultimately, it isn’t about the “I” at all — it’s about the world we build together.

The show gives us plenty to cringe at, plenty to root for and plenty to grapple with as we attempt our own balance of ancient tradition and modern life.

As Soloveitchik might put it: Ramy, with “his glance fixed upon the higher realms, forgets all too frequently the lower realms and becomes ensnared in the sins of ethical inconsistency and hypocrisy…[he has] been so intoxicated by [his] dreams of an exalted supernatural existence that [he has] failed to hear the cries of ‘them that dwell in the houses of clay.’”

Ramy’s biggest weakness is his lofty ideals. He crashes and burns, time and again. He gets so close! And you’ll be rooting for him to the bitter end.