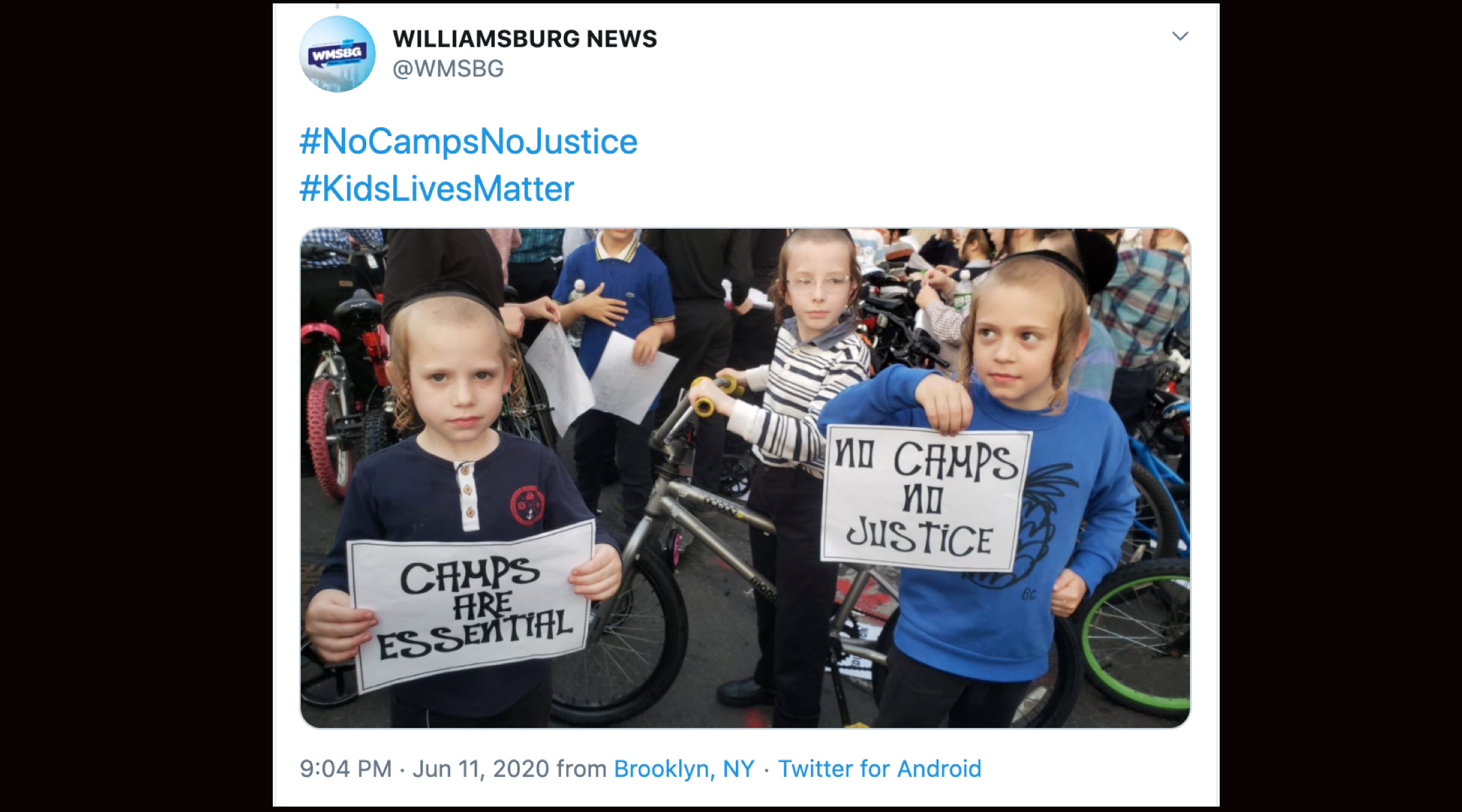 Orthodox children in New York City are rallying to have their camps open amid the coronavirus pandemic. (Screenshot from Twitter)
Advertisement

(JTA) – Protesters have been a daily sight in Brooklyn over the last few weeks. But the protesters blocking traffic Thursday on the streets of the New York City borough’s Orthodox neighborhoods were a little younger than usual.

Their shouting — “We want camp!” — quickly made their aim clear: Orthodox children were rallying to call on the city to allow summer camps to operate despite the coronavirus pandemic.

Many of the children carried printed signs with just one word: “Camp.”

But others carried signs alluding to the very different protest movement, for racial justice, that has been flooding many Brooklyn streets with protesters for weeks. Some social media posts promoting the camp rallies, which are set to continue today, used the hashtag #KidsLivesMatter.

“We want camp,” they shouted as a city bus honked.

Turx tweeted that the rallies were designed to preempt intervention by city authorities who have sought to enforce social distancing rules at playgrounds in Orthodox neighborhoods at a time when mass protests have unfolded across the city.

“Because it’s a protest, it means the cops can’t stop them, and also the virus can’t affect them,” Turx wrote.

The protests were organized to call on Mayor Bill de Blasio to allow summer camps to operate after three months of lockdown as a result of the COVID-19 pandemic. (The protest organizers are unclear at this point.) New York’s governor, Andrew Cuomo, has said day camps can open with social distancing in place. He has not yet announced whether overnight camps, which many Orthodox children attend, can operate.

Orthodox lawmakers have become increasingly vocal about opening summer camps and city playgrounds. They say both are needed to relieve Orthodox families, who often have as many as 10 children, living in small apartments.

State Sen. Simcha Felder wrote a letter Thursday to de Blasio saying “we can no longer tolerate the excessive restriction of closed playgrounds.” Access to many green spaces in the city has been restricted because they contain playgrounds, which are closed to stop the spread of disease.

In recent weeks, closed playgrounds in Orthodox neighborhoods have become sites of tension with city officials sent to enforce closures.

State Assemblyman Simcha Eichenstein posted a video to Twitter this week calling on Cuomo to allow camps to open.

“Our children have now been home for 86 long days,” he said. “Let’s work together and find a way for our children to enjoy our sleepaway camp this summer.”

The rallies are set to continue starting at 2 p.m. today, according to one widely followed Twitter account in the Satmar Hasidic community.

#KidsLivesMatter #GiveKidsSummer protests spreading all over NYC, Thousands of Hasidic children in #Brooklyn will be Cycling/marching today starting at 2pm demanding from @NYCMayor @BilldeBlasio to open Public City Parks! And demanding from @NYGovCuomo to open sleep away Camps. pic.twitter.com/RdWCNDjpTJ