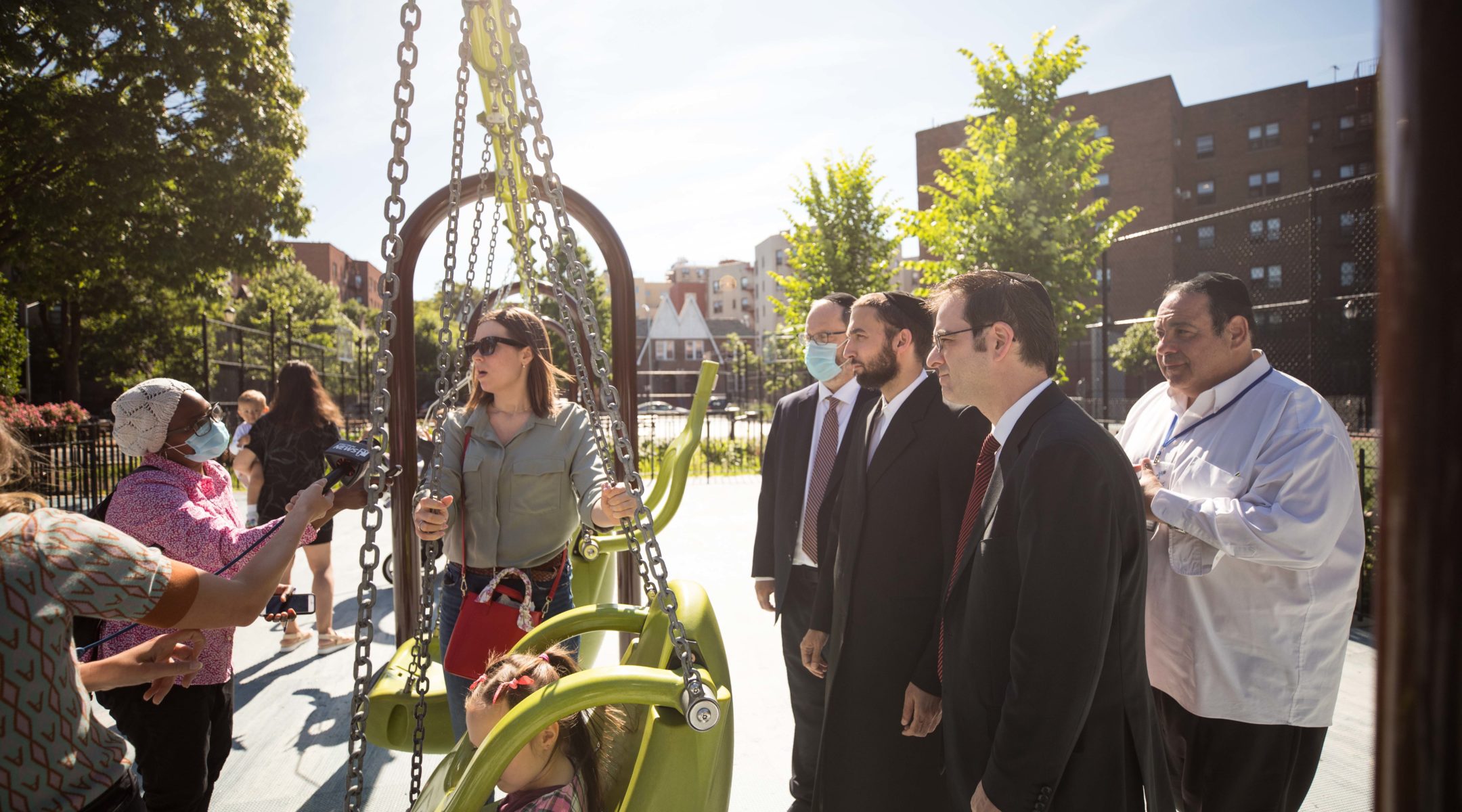 (JTA) – Fresh off cutting the locks off a closed Brooklyn playground, leaders in New York City’s Orthodox community are turning their attention to Gov. Andrew Cuomo’s ban on overnight camps, issued last week to keep the coronavirus pandemic in check.

A lawsuit filed Thursday by the Association of Jewish Camp Operators, which represents dozens of camps serving Orthodox children in New York, charges that Cuomo’s ban should not apply to Jewish camps because they fulfill a religious need.

And Kalman Yeger, an Orthodox city councilman from Brooklyn whose district includes neighborhoods with large Orthodox communities, is urging sleepaway camps to open despite the ban. He said the governor would be powerless to stop camps from serving the tens of thousands of children from Orthodox enclaves in Brooklyn and beyond who typically attend them.

“There’s strength in numbers,” Yeger told the Jewish Telegraphic Agency. “When thousands and thousands of children are in camps, I challenge the governor to drive around and send all the kids back home. Let him drive the kids home.”

Whether any camp directors will take up Yeger’s charge is unclear. The New York State Department of Health said sleepaway camps that reopen in spite of the ban could face penalties — including possibly losing their right to operate after the pandemic is over.

“An overnight children’s camp found to be operating in violation of the state’s directive will be subject to closure and possible fines,” a spokesperson for the department said in a statement. “In addition, the operator will likely jeopardize their ability to obtain a permit to operate in the future.”

Still, the stakes are high for Orthodox families, many of whom have a large number of children living in small New York City apartments.

After nearly 100 days without in-person schooling, the summer camps are more important than ever, as they include morning classes that in many cases are considered a continuation of the school experience. During the pandemic, some Orthodox schools have not provided full days of virtual instruction — some children receive only one hour a day of lessons by phone.

Assemblyman Simcha Eichenstein, who represents a large Orthodox community, bemoaned the loss of sleepaway camp for his own daughter, who was supposed to go to camp for the first time this year.

“I speak to you as a parent, not just as an assemblyman,” he said. “Do you think for a second I would send her if I believed that her life or anyone else’s life would be at risk?”

The lawsuit is the second filed this week about the impact of New York’s coronavirus restrictions on Jewish communities. Three Orthodox men from Brooklyn are part of a lawsuit filed last week against the state’s restrictions on the number of people who can attend religious services during the pandemic.

Legal proceedings are unlikely to provide swift answers for families seeking care for their children starting next week. Eichenstein, who hinted at the impending lawsuit earlier this week, is encouraging camp directors to find suitable campgrounds in other states in time for the summer session.

“There are camps that can easily relocate out of state and just rent a sleepaway camp in a neighboring state that allows it,” he said.

A camp that serves children with cancer and blood disorders, Camp Simcha, is planning to open a network of day camps, calling it Camp Simcha Without Borders, in place of its usual sleepaway offering.

Eichenstein has suggested turning sleepaway camps into day camps, which are allowed in New York state, though many day camps are choosing not to operate because of the state’s onerous restrictions designed to keep children and staff safe.

Both Eichenstein and Yeger said the decision to allow day camps to open while sleepaway camps remain closed does not make sense.

“The reality is that a serious case has been made that sleepaway camps could potentially be safer than day camps,” Eichenstein said.

Yeger applied Talmudic reasoning to spell out that case.

“Every single day of day camp, children are risking infection, are they not? And then they go back to camp the next day and they risk the spread, are they not?” he asked.

“It’s a kal v’chomer,” he said, using the Hebrew term used frequently in Talmud study for an inference made in a case where the proof is stronger than a previously accepted one. “If it’s OK for day camps, it must for sure be OK for sleepaway camps, how can it not be?”

The lawmakers argue that sleepaway camps are safer than day camps because they are closed environments. Yeger suggested that children could be tested for COVID-19 before going to camp and have their temperatures taken before boarding the bus.

“And then when they get to camp, every bunk self-contain for the first two weeks,” he said.

Eichenstein said he presented the governor with a 19-page document with proposed guidance for camps prior to Cuomo’s decision late last week not to allow them.

Without camp, he worries about how the children he represents will spend their summer.

“If you’re saying no to sleepaway camps, what is your solution to thousands of young adults not having structure, not having an educational structure, not being in a controlled environment?” Eichenstein asked, addressing his question to Cuomo.

“The kids are on the streets, anyways, they’re playing with each other, they’re on their bikes, schools have been shut for 92 days, it’s not like they’re sitting at home. It makes absolutely no sense.”