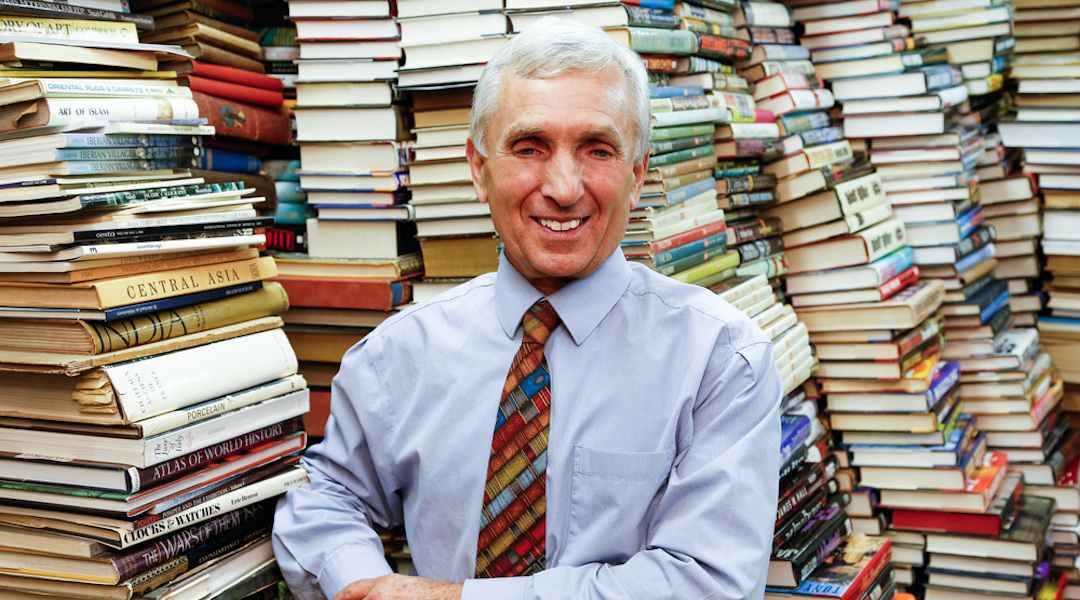 "What you see of someone's books tells you about their intellect and their personality," said Ken Gloss, who owns Boston's Brattle Book Shop. (Courtesy of the Brattle Book Shop)
Advertisement

BOSTON (JTA) – In early April, just a few weeks after non-essential businesses in Massachusetts were shut down due to COVID-19, the staff at the Brattle Book Shop noticed that some prominent personalities conducting video interviews from home were seated in front of fairly lackluster bookshelves.

So staffers at the legendary 185-year-old antiquarian bookseller in the heart of downtown Boston offered to help them out.

In an April 7 Twitter post, they offered their expertise to prospective customers seeking a more sophisticated look — or at least a tidier one, free of worn copies of old paperbacks. The local media took note of the tweet and soon the phone started ringing.

We see your book shelves in the backgrounds of Zoom meetings and TV appearances. Let us help you curate your background. Books in all subjects. Please email us at info@brattlebookshop.com for more details.

One caller was an epidemiologist who wanted to feature medical books. Another who suddenly found himself conducting business meetings from home wanted to tone down his valuable collection of rare books. Some callers didn’t really care; they just wanted a good-looking selection.

“Books are giving that first impression,” Ken Gloss, the Brattle’s owner, told the Jewish Telegraphic Agency in a phone interview from the shop, which is located just steps from Boston Common. “What you see of someone’s books tells you about their intellect and their personality, whether you’d like to meet them or not meet them.”

As the world has shifted to virtual gatherings in response to the coronavirus pandemic, millions of people have suddenly gained intimate glimpses of the living rooms and home offices of their friends, co-workers or even strangers who happen to be taking the same online course. And some have grown self-conscious about the image those books are projecting.

Jonathan Sarna, a noted historian of American Judaism, told JTA that he switched to a virtual background after a participant in a webinar he was leading offered to organize the piles of books piled high on his desk. 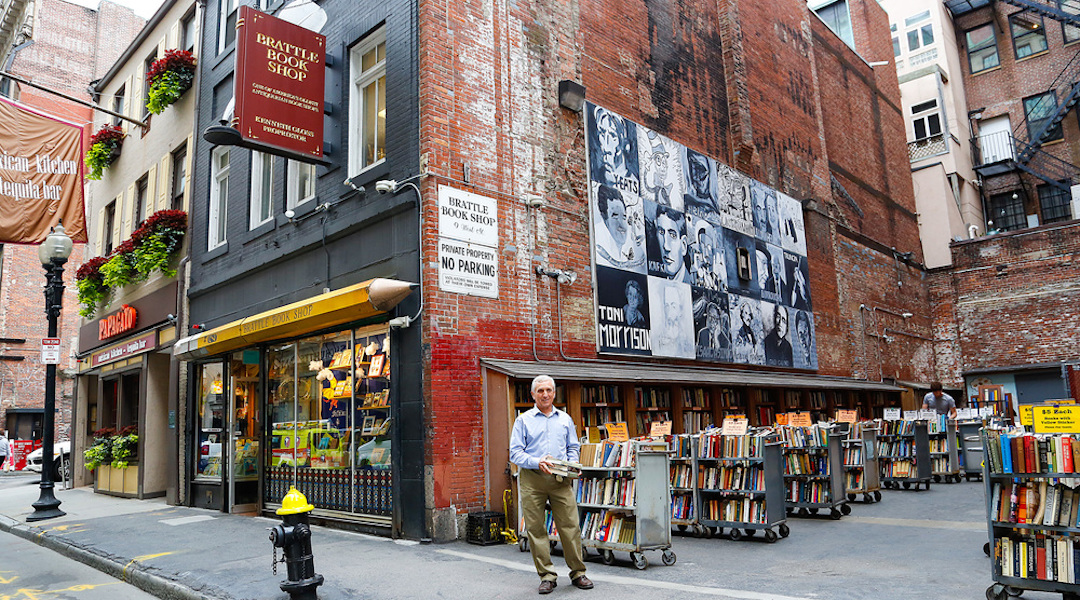 For those who want to improve the look of their home libraries, Gloss and his staff start by asking about the person’s interests. Then they scour their massive inventory and arrange a selection of books on a shelf. Finally they email a photograph to the prospective customer, who can choose to purchase any or all of them.

The Brattle has been in Gloss’ family since 1949, when the shop was purchased by his father, George, the American-born son of Jewish immigrants from Lithuania. Ken Gloss took over after his dad died in 1985.

A regular on the popular public television program “Antiques Roadshow,” Gloss is a sought-after lecturer and an appraiser for clients that include Harvard University and the FBI. He’s also no stranger to using books as decor, curating selections for set designers who need, say, books from the 1950s. He once supplied 6,000 books with red covers for a movie set.

Over the years, the Brattle has sold 16th- and 17th-century Hebrew Bibles, volumes of the Talmud, a commentary by the medieval Jewish philosopher Moses Maimonides and old cookbooks with kosher recipes.

“It tells a huge amount of society and its values,” Gloss said of the cookbooks.

So what books should Jewish readers consider if they’re looking to spruce up their videoconference backdrops?

For Bostonians, he suggests “The Jews of Boston,” a photo-rich gem co-edited by Sarna, or “The Death of an American Jewish Community,” a timely title that addresses Black-Jewish relations in the city. Books by and about the Boston-born maestro Leonard Bernstein also stand out, he says. 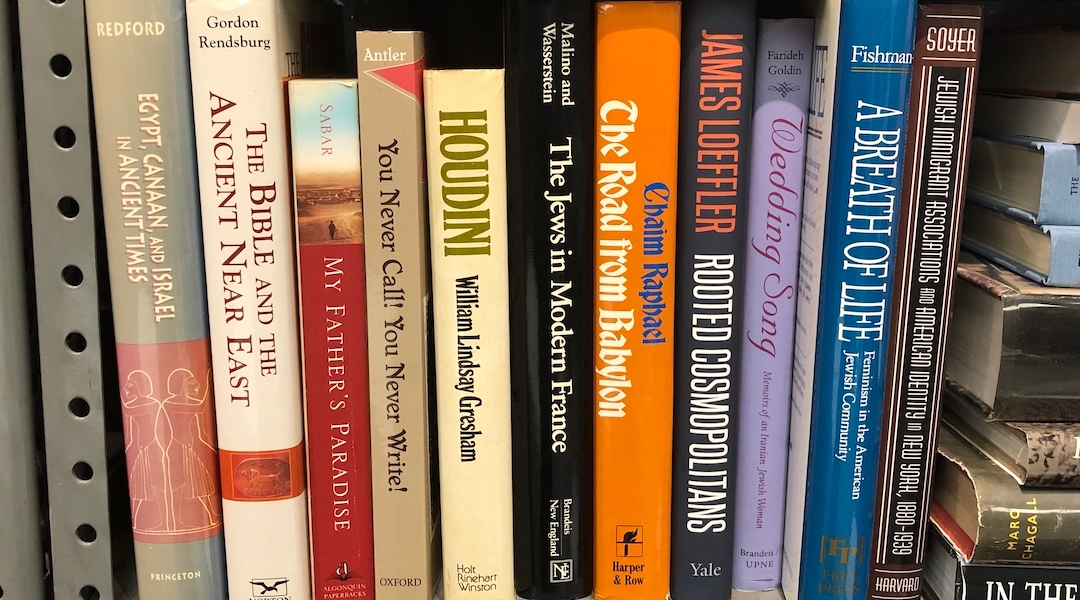 Here are some Jewish bookshelf suggestions from Gloss. (Courtesy of the Brattle Book Shop)

One book that struck a chord with Gloss is “Outwitting History: The Amazing Adventures of a Man Who Rescued a Million Yiddish Books,” by Aaron Lansky, the founder and director of the National Yiddish Book Center. Gloss recalled in vivid detail a passage from the book in which Lansky described visits with elderly Yiddish speakers who insisted on feeding him as they told stories about the cherished books they were passing on.

“We’ve experienced that,” Gloss said. “You’re buying their library. It’s so emotional and so deep to them. They want to talk about it.”

While the bookshelf venture can’t entirely sustain the Brattle, which has been closed for more than two months, Gloss said it has provided some fun for the staff. But there’s a glimmer of hope on the horizon: As of last week, Massachusetts began lifting restrictions on businesses and the Brattle was able to reopen, albeit with restrictions.

The reopening went well, said Gloss, who recently found another reason to celebrate — he became a first-time grandfather, beginning a new generation of book lovers.

“One of my great joys when my children were growing up was reading to them,” he said. “It did not matter exactly what book, but the act of reading. I plan to regularly read to him.”