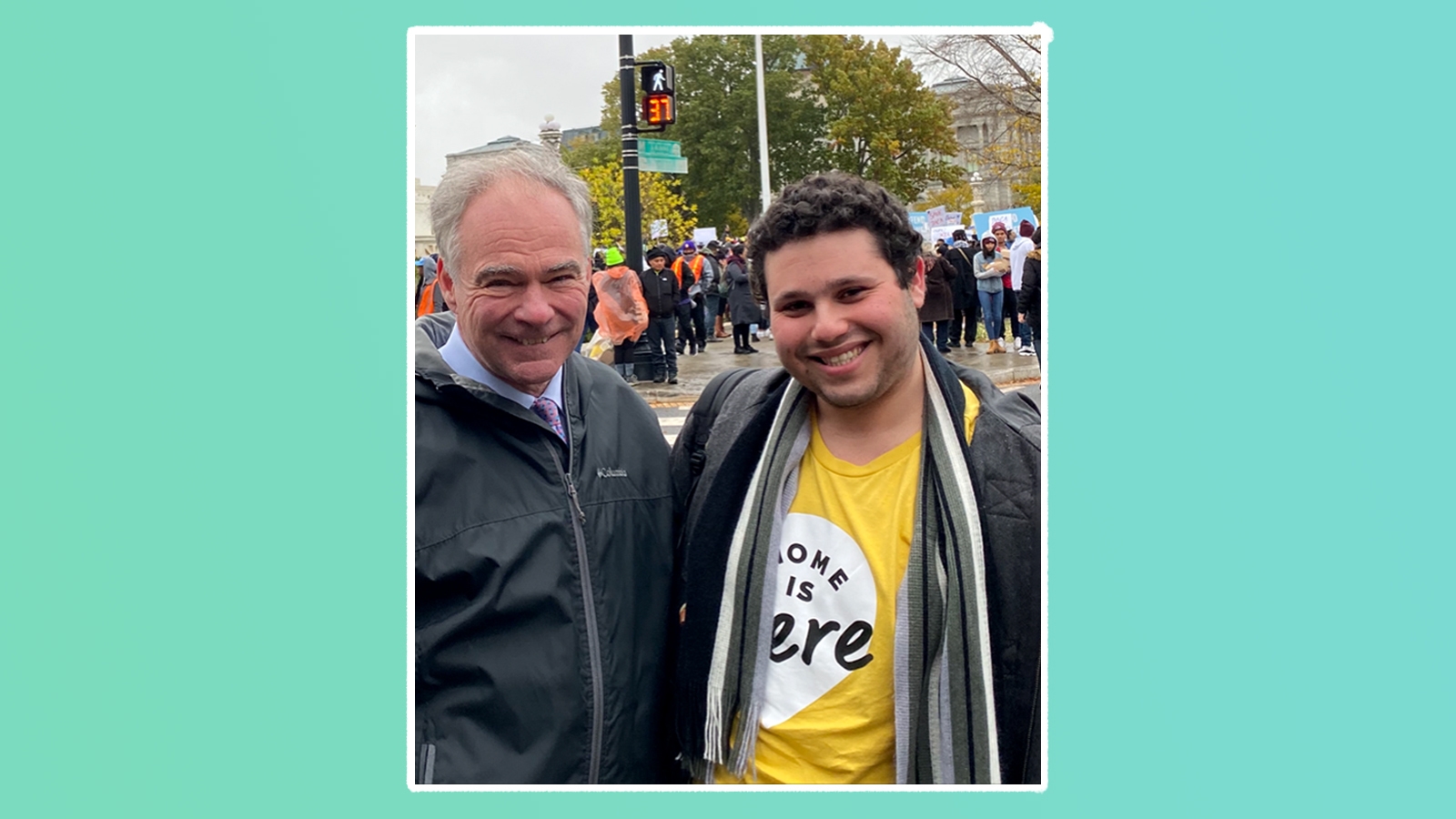 Elias Rosenfeld with U.S. Sen. Tim Kaine in front of the U.S. Supreme Court, Nov. 12, 2019, the day oral arguments were presented in the case on DACA arrivals. (Courtesy of Rosenfeld)
Advertisement

BOSTON (JTA) – Elias Rosenfeld’s phone rang on Thursday morning hours after the U.S. Supreme Court blocked President Donald Trump from moving to deport him and hundreds of thousands of other young immigrants like him.

It was Rabbi Jonah Pesner, director of the Reform movement’s Religious Action Center, with whom Rosenfeld had worked closely on advocacy related to defending the Deferred Action for Childhood Arrivals program, known as DACA, that gave temporary protected status to undocumented young people who arrived in the United States as children.

“It felt good” to receive the support, Rosenfeld said. “It’s important for Jewish leadership to be involved in this issue.”

Rosenfeld, a Jewish Brandeis University student, immigrated to the U.S. from Venezuela with his family when he was 6 years old. As a teen, after his mother died of cancer, he learned that his legal status had ended and he had become undocumented.

He benefited from an executive order signed by President Barack Obama that created DACA in 2012. The order gave DACA recipients, known as “Dreamers,” temporary protection that allowed them to obtain driver’s licenses, apply for college loans and work legally.

Trump rescinded the order in September 2017 as part of his agenda opposing immigration.

Since then, Rosenfeld has become an outspoken activist, working with elected political leaders, immigrants rights groups and Jewish advocacy groups to push for permanent protection for DACA recipients and other undocumented people.

So the court’s 5-4 vote to restore temporary protected status to more than 700,000 Dreamers — Chief Justice John Roberts cast the deciding vote — allowed Rosenfeld to breathe a sign of relief.

But he also understood quickly that his advocacy would need to continue. In ruling that the Department of Homeland Security’s action was “arbitrary and capricious” under the law, the court blocked the Trump administration from moving to deport Dreamers. But it left open the door for the program to be ended another way, something analysts predict Trump will try to do if he is reelected in November.

“For a lot of us, it’s a big sense of relief,” Rosenfeld said. “But at the same time we are celebrating today, we know we have a lot of work to do tomorrow.”

The victory was unexpected, Rosenfeld acknowledged. He recalled back to last November, when he was among those at the Supreme Court when oral arguments were presented in the case.

“It was an emotional day for me. We didn’t know what was going to happen,” he said, capping a two-year political campaigning and grassroots organizing effort.

As the anticipated date of a court ruling neared, Rosenfeld and other activists started each Monday and Thursday morning — the days the court releases its decisions — by checking to see if the decision was announced.

“There was a lot of anxiety,” he acknowledged.

In the nearly three years since Trump ended the program, Rosenfeld has been immersed in advocacy for immigrants rights, working on political campaigns for the midterm congressional elections, lobbying Congress and being active in state legislative efforts to pass laws allowing undocumented people to obtain driver’s licenses, including a bill now before the Massachusetts Legislature.

He takes heart in the support for the Dreamers among a large majority of Americans on all political sides. A poll released this week found that even 69% of Americans who voted for Trump in 2016 want the program to continue.

Rosenfeld hopes this widespread support across the political divide translates into congressional action. He pointed out that DACA recipients are part of American society, homeowners, well-educated professionals and many who are on the front lines of the COVID-19 pandemic, from medical experts to essential workers in other businesses.

A priority now is to seek regulatory protection for thousands of other young people who had not yet turned 16, the age required to apply for DACA at the time the Trump administration halted the program.

For the first time in a few years, Rosenfeld and other DACA recipients he knows can think beyond two or three months at a time and can plan for life beyond college, about where to live and other life decisions.

“Overall, we feel a little a more secure,” he said. And while Rosenfeld assumes Trump will campaign in the upcoming presidential election with a call to rescind DACA, he said he is relieved that “it will be without the human cost of DACA recipients being deported.”

Rosenfeld said he planned to celebrate the court’s ruling, perhaps seeing friends in accordance with guidelines meant to curb COVID-19. But he sounded a cautionary tone, noting that the relief is temporary and the ruling redoubles the need for additional advocacy.

“At the same time we are celebrating hard today and acknowledging the hard-sought victory,” Rosenfeld said, “but knowing tomorrow it’s a steppingstone into a bigger victory.”