In Germany, several churches have perverse anti-Semitic sculptures from the Middle Ages. Can one man get them taken down? 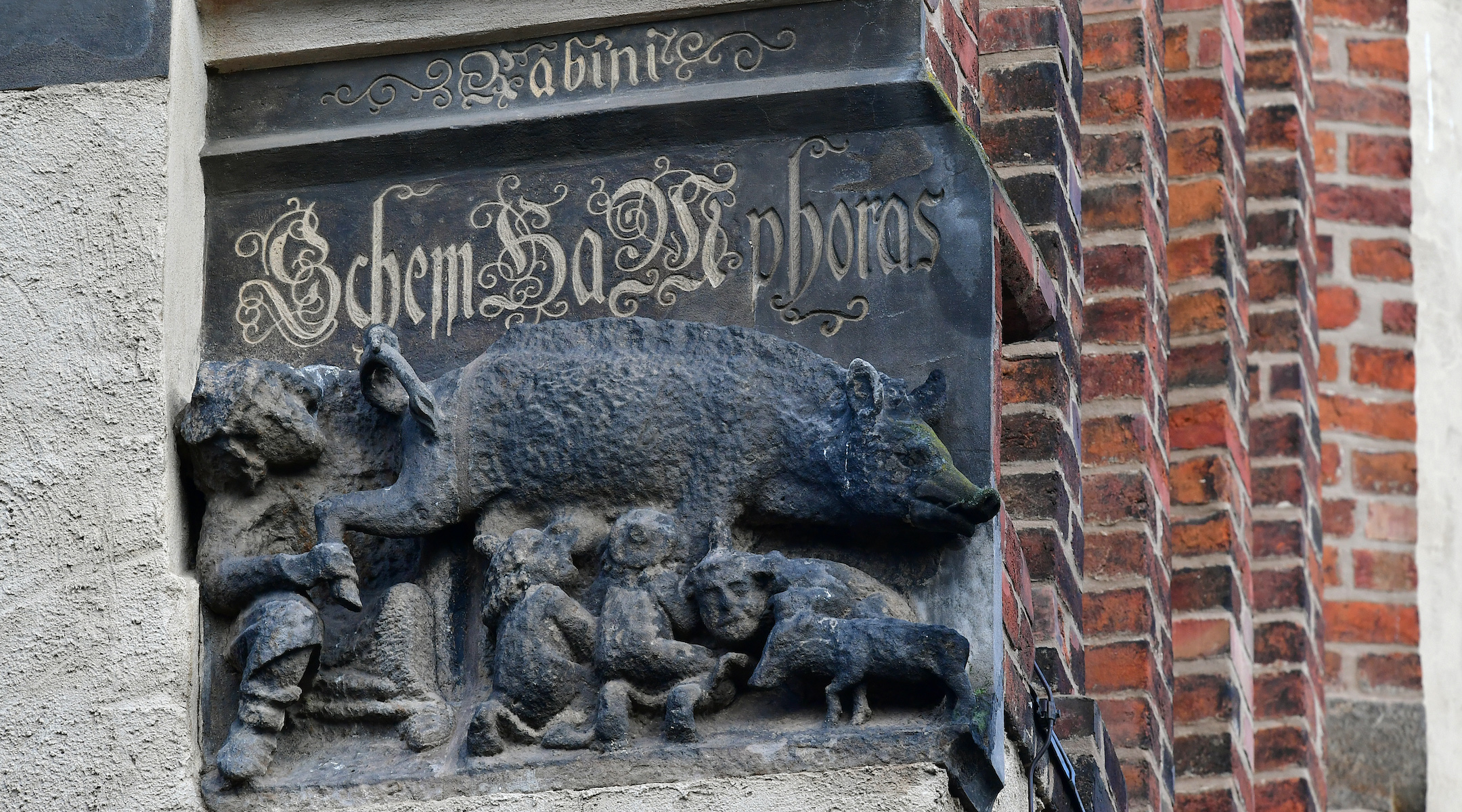 The Judensau sculpture on display on the outer wall of the town church of St. Marien in Wittenberg, Germany, Feb. 4, 2020. (Hendrik Schmidt/picture alliance via Getty Images)
Advertisement

BERLIN (JTA) – They date back to the late Middle Ages and irritate to this day: The Judensau (literally “Jewish sow”) is a Christian folk image that depicts Jews sucking on the teats or peering into the anus of a pig.

Mostly found in the form of reliefs or gargoyles on the exterior of German churches, some of them major historical landmarks, the images have been the subject of increasing public debate in recent years. And now Germany’s highest court will weigh in on the matter when it hears the case of a Jewish man who says one such sculpture insults him personally.

Michael Duellmann has already lost his bids against St. Marien Church in Wittenberg in district court and on appeal.

“This is the first case regarding a Judensau that is going to the Federal Supreme Court,” Duellmann’s attorney, Christian Rohnke, told the Jewish Telegraphic Agency.

In fact it may be the first Judensau case to go to court at all, but it’s certainly not the first time a German church has tried to lance this abscess. Last week, a landmarks commission in the town of Calbe ruled against a local church that was seeking to retire its Judensau, which had been removed temporarily for restoration. The commission insisted the sculpture be put back on the church facade. The church has not decided whether to appeal.

There are assumed to be about 40 Judensaus in Germany, the oldest dating to the 13th century. Intended to teach lessons about sin and virtue, they were usually placed inside where Jews would not see them.

But beginning in the 14th century, churches also placed them outside, according to the late Israeli historian Isaiah Shachar. In a 2017 interview with the Suddeutsche Zeitung newspaper, Shachar said there are Judensaus in Portugal, France, Poland and Sweden, but most are in German-speaking countries.

Opinion is split over how to deal with the sculptures. The German-Jewish historian Michael Wolffsohn recently told Deutschlandfunk radio that the Judensau is a “perversity,” but he opposed taking them down, saying it’s better to address the issue forthrightly than hide it from view.

“What’s done is done and cannot be undone,” he said. 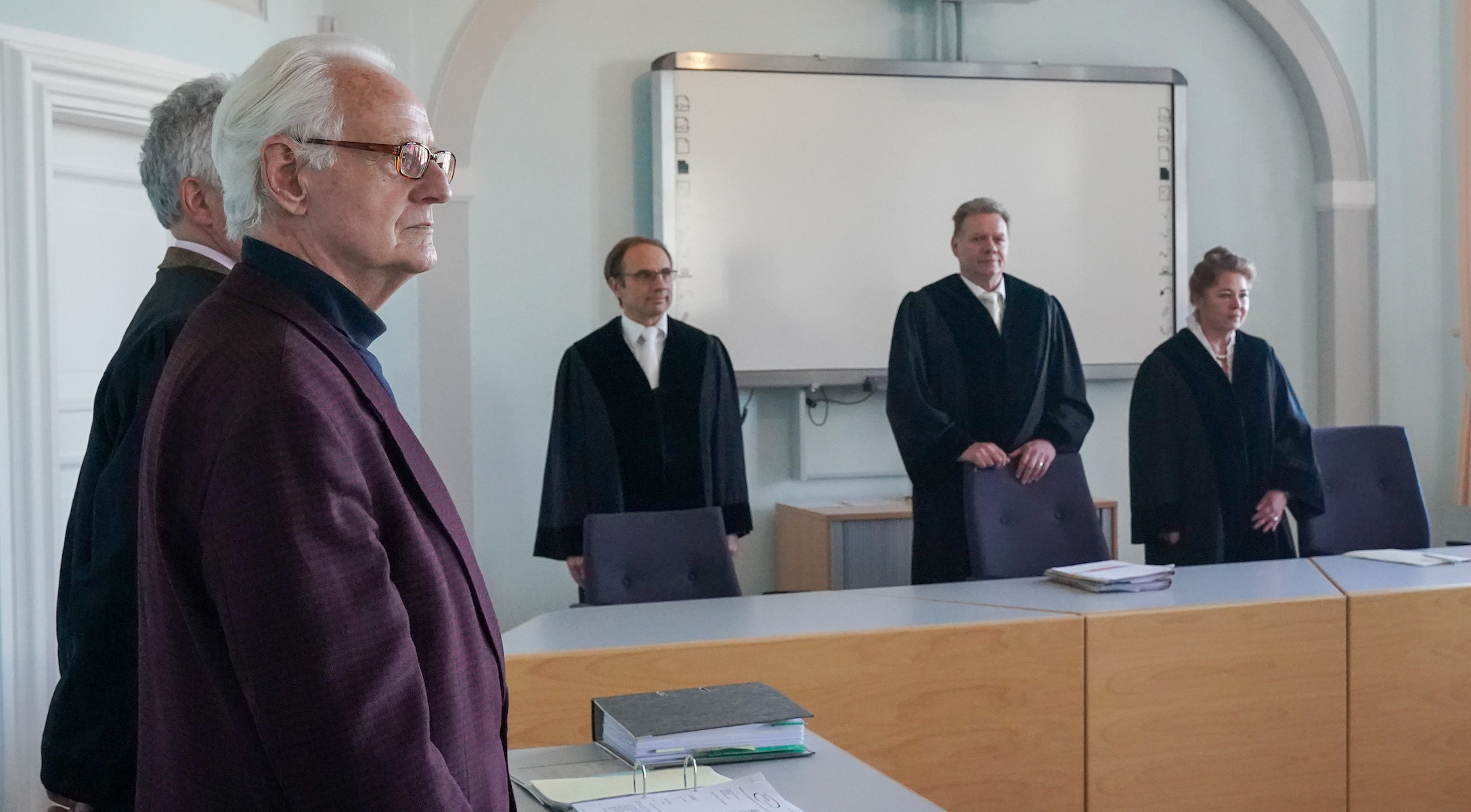 Michael Duellmann, foreground, stands in the courtroom of the Higher Regional Court in Naumburg for a hearing in his bid to remove the Judensau on the Wittenberg city church, Jan. 21, 2020. (Peter Endig/picture alliance via Getty Images)

But Germany’s commissioner on anti-Semitism, Felix Klein, says all the Judensau reliefs should be taken down and put in museums.

“They have to be removed from the public space,” he said.

Kastner has been fighting against Judensaus since 2002, when he and a colleague paraded in front of the Cologne Cathedral wearing sandwich posters printed with the word “Judensau.” The pair drew stares and questions from a curious public, some of whom had never noticed the Judensaus outside and inside the 13th-century church.

Historians and clergy should “take [the exterior sculptures] inside the church and contextualize them and confront them and their history,” Kastner said in a telephone interview from his home in Munich. “But they should not be outside. They have the same insulting and humiliating impact today as they did in the Middle Ages.”

That’s exactly what St. Stephani Church in Calbe was hoping to do with its Judensau, which depicts a Jew with his head buried in the rear of a pig. The church had applied for permission to bring the sculpture indoors as part of an exhibition on the history of anti-Semitism, but they were turned down by the landmarks commission. The Judensau, which had been taken down for renovation along with other gargoyles, was put back up last week. 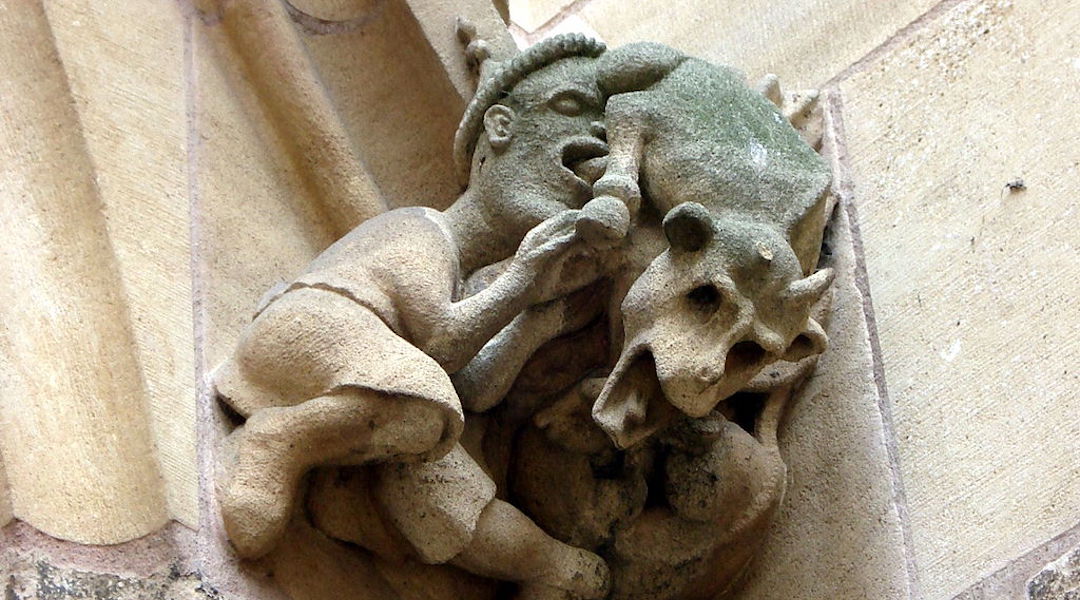 A Judensau on the Cathedral of St. Martin in Colmar, Germany. (Wikimedia Commons)

“Their job is to protect landmarks and not bend to the spirit of the day, the zeitgeist,” Pastor Jurgen Kohtz said. “[But] we do not want anything on our church that is insulting to other religions and people, especially not the Jews.”

Calbe Mayor Sven Hause told JTA that he understands both positions, and favors meeting with politicians and religious leaders to find a solution.

“I don’t think anyone really wanted to have to see this chimera again,” he said.

The image is small and sits alongside the face of a monkey wearing the pointed hat assigned to Jewish men in the Middle Ages.

Pastor Johanna Levetzow and some church volunteers have been discussing what to do about it for more than two years. They began by making a flyer about its history.

“We saw how important it was to face this and hear different opinions about whether to take it down, cover it or put it in a museum,” she said. “We decided to confront it, even if it is hard for us.”

In February, Yuri Kadnikov, the chief rabbi of the state of Mecklenburg-Vorpommern, which is home to some 1,300 Jews, visited the church along with the state’s commissioner on anti-Semitism, Hansjoerg Schmutzler. The rabbi climbed two flights of stairs to see the sculpture; he concluded it should be left in place.

“If we take it away, we can forget, and this is very problematic,” Kadnikov said. “There is a danger one can repeat the history. But if it stays, it is important that there is an explanation.”

In Wittenberg, the 14th-century Judensau is more extreme. Affixed to the outside of the church where Martin Luther nailed his 95 theses more than 500 years ago, it depicts Jews sucking on a sow’s teats while a rabbi peers under its tail. The inscription above it — added later, inspired by one of Luther’s anti-Jewish texts — is an erroneous transliteration of God’s Hebrew name. 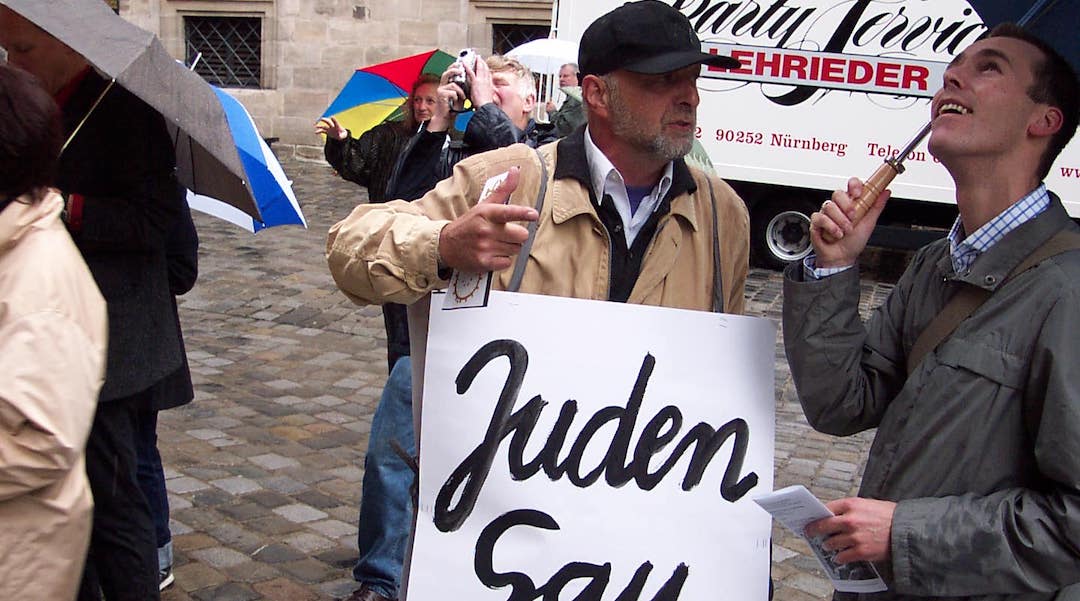 Activist Wolfram Kastner informs a passerby about a Judensau. (Courtesy of Kastner)

An explanatory plaque, installed in 1988, explains that the inscription is a deliberate corruption of God’s name, adding that “this name died with six million Jews under the sign of the cross.”

Pastor Johannes Block recently told Suddeutsche Zeitung that he was “shocked and outraged” when he first saw the relief.

“It also fills me with shame and pain that this sculpture is hanging on the facade of our church,” he said.

Block is talking with the Central Council of Jews in Germany about the design of a new plaque. Duellmann has turned down an invitation to take part in these talks.

“It is a disgusting, obscene mockery of Jews and Judaism and the name of God,” Duellmann said.

In 2017, Duellmann joined a vigil outside the church with a group of nuns who asked if he, as a Jew, would sue to remove it. Duellmann took on the task with enthusiasm.

His case is not directly about confronting the past but about something simpler — whether by keeping the sculpture, the church is insulting Duellmann as a Jew. He is arguing that explanatory plaques are insufficient to address that issue.

“I am not sure whether or to what extent this [case] is a mirror of a changing society,” said his lawyer, Rohnke, who expects to get a Supreme Court date by early 2021. “What is important is that it makes the matter very official. The court will have to take an official position.”

“If I lose again, then we will go to the European Court for Human Rights,” Duellmann said. “It is a test for all of Germany.”