A homeless woman is seen on the streets of the Skid Row neighborhood in Los Angeles, May 16, 2020. (Apu Gomes/AFP via Getty Images)
Advertisement

LOS ANGELES (JTA) — Art had been living with his mother for more than 30 years when she lost her apartment a little over a year ago. Though the mother was able to move in with one of Art’s brothers, the 49-year-old former tennis coach had nowhere to go and started sleeping in his car.

That meant a nightly struggle to find a place to park — and sleep — undisturbed. Sometimes he would park in a supermarket lot, only to have employees attempt to tow his car or call the police. And there was nowhere to take a shower or use the bathroom.

“Your rhythm is out. You feel almost like a zombie,” Art recalled. “The day just continues rolling into the next day.”

Things turned around for Art, who asked to be identified by his first name only, after Jewish institutions in this Southern California city invited him and other homeless people here to sleep on their property.

Through a program called Safe Parking LA, founded by three congregants at a local Reform synagogue, parking lots that otherwise would sit empty overnight are turned into safe spaces for the thousands of city residents who sleep in their cars because they do not have access to housing.

Art first parked at a synagogue, then at a Jewish residential addiction treatment center. At night, a security guard watches over him and others staying there. There’s a port-a-potty on site and, before the pandemic began, a free gym membership gave him access to a shower.

“They offer a little sanctuary,” he told the Jewish Telegraphic Agency in early March over dinner at Ikar, the synagogue that provided the parking lot for his overnights until the recent move to the treatment center Beit T’Shuvah.

Safe Parking LA is the brainchild of Scott Sale, along with Pat and Ira Cohen, members of the Leo Baeck Temple. In 2010, they were inspired by a similar initiative in Santa Barbara, a city about 110 miles north.

Sale said he drew inspiration from the Jewish principle of welcoming the stranger.

“That would be the major principle in Judaism that I espouse to, which i think Pat and Ira do, too, and so that was the major principle — to have our doors open, whether it’s Passover for Elijah or the stranger walking by my community,” he said, referring to the tradition of welcoming the biblical prophet to the Seder.

It took time for the trio to launch the initiative. Their efforts included lobbying the city to change a law that prevented organizations from housing people overnight.

“If you look at all tools in the toolbox to address homelessness, safe parking is one of those tools,” said John Maceri, the CEO of The People Concern, a Los Angeles social service agency dealing with homelessness. “It is not the only solution. It is a solution that has a very specific application to very specific types and numbers of people experiencing homelessness … but for those individuals who have vehicles it can be a very effective intervention.”

Safe Parking LA now has a $1.8 million budget, most of which comes from the Los Angeles Homeless Services Authority, and operates nine lots in the city with a total of 150 parking spots. Some of the lots are public — libraries, municipal buildings and the county Health Department. The private ones include Beit T’Shuvah, an Episcopal church and, until recently, Ikar.

Safe Parking LA does most of the work — vetting applicants as well as providing liability insurance, a security guard and the port-a-potty.

Sale and the Cohens had originally tried to operate a lot at their Leo Baeck Temple but found the area was not in demand — few homeless people worked or received services there.

That meant Ikar, a nondenominational congregation with 800 member families, was the first Jewish organization in Los Angeles to participate in the initiative, in November 2018, shortly after acquiring its own space for the first time. The congregation had previously rented space for its programming.

“When we started to think about what it meant for Ikar to have a home in Los Angeles, it seemed clear to us that we needed to use our home to address the crisis of people living without housing in our city,” said Brooke Wirtschafter, the synagogue’s director of community organizing. 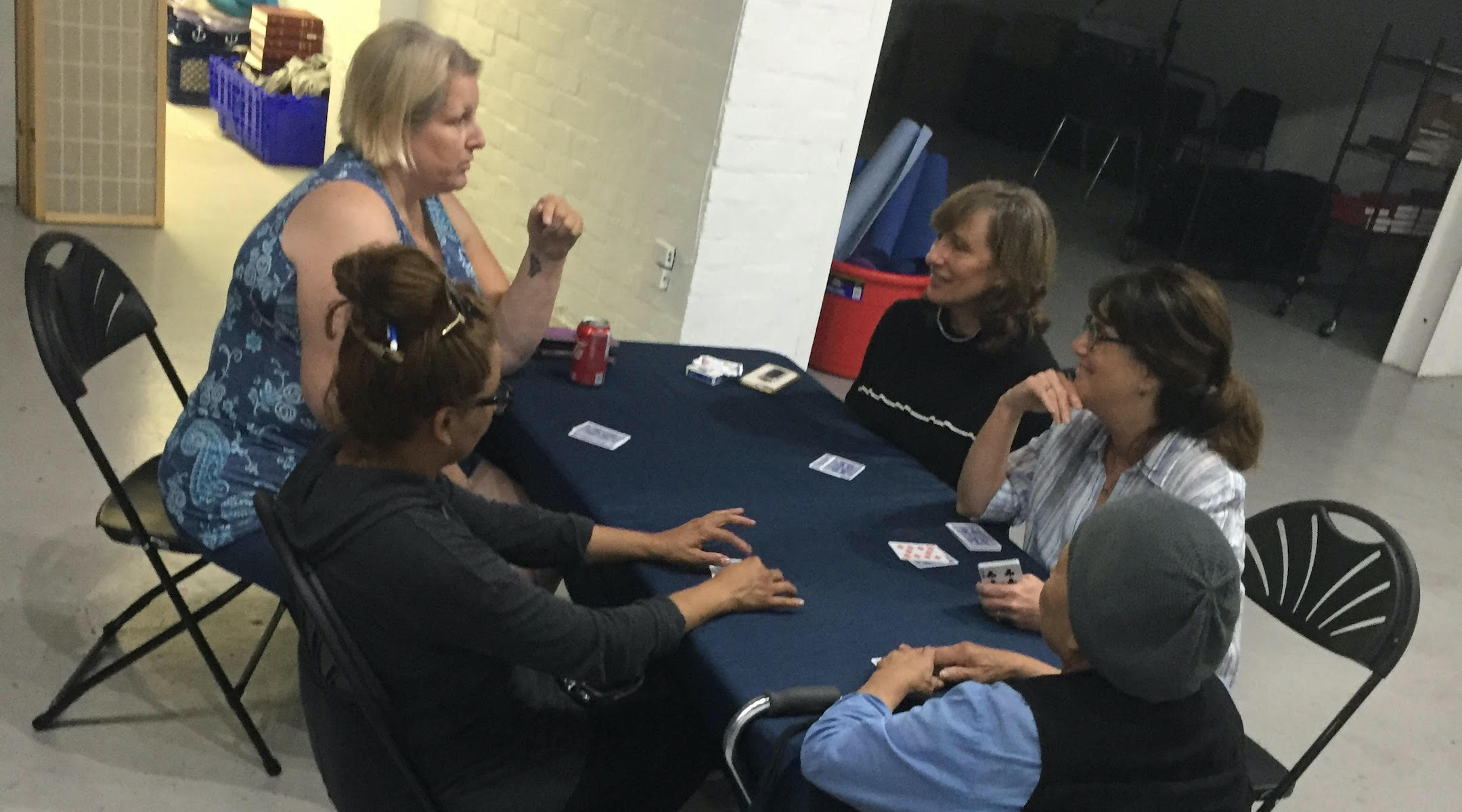 Ikar volunteers and participants in the Safe Parking LA program play card games following a dinner hosted by the synagogue. (Courtesy of Ikar)

This January, Beit T’Shuvah opened its lot. Safe Parking LA decided in March to consolidate the two nearby lots, neither of which was at capacity, to cut costs — each lot costs $200,000 to run per year. The Ikar participants moved to the Beit T’Shuvah lot because it was larger  and gated.

For the Jewish rehab center, the opportunity to help those struggling resonated, said Adam Siegel, its director of community development.

“As a community made up of individuals [where] many have struggled within the margins of our society, we recognize that we are now in a position to help those that are facing these kinds of challenges,” he said.

Siegel said that turning the center’s lot into a safe parking lot has “gone smoothly,” and that staff and community members are happy that the organization can “utilize this space to its full potential.”

Some elements of the program are suspended because of the coronavirus pandemic, which has hit this city’s homeless population hard and drawn attention to the inadequate options for safe short-term housing.

Ikar members had raised money to buy every program participant a gym membership, so they could have a place to shower. That is no longer an option. And the twice-monthly dinners for participants and volunteers to come together are also on hold.

Those dinners were designed to foster connection and community. Tables were set with tablecloths, plates and silverware. Volunteers and program participants go together to get the food from a kosher vegetarian buffet. Board games provide some entertainment.

“We want it to actually feel warm and to feel like a hosted dinner, where people are sitting together to build relationships, not like a charity event,” Wirtschafter said.

At a time when many synagogues are increasing security, Wirtschafter said that participating in the program made Ikar safer.

“This is an area where there is quite a bit of street homelessness and other stuff going on, and we actually think that our building is safer overnight with trusted people who just want a safe place to sleep,” she said.

Indeed, one 54-year-old woman who stayed in Ikar’s lot for more than 10 months with her 23-year-old son described the program as “a necessity.”

“You’re not harassed by the cops,” said the woman, who asked that her name not be used. “You have a safe place to come and go to the restroom and park and plug in for your medical [devices], for your car, for charging your phone.”