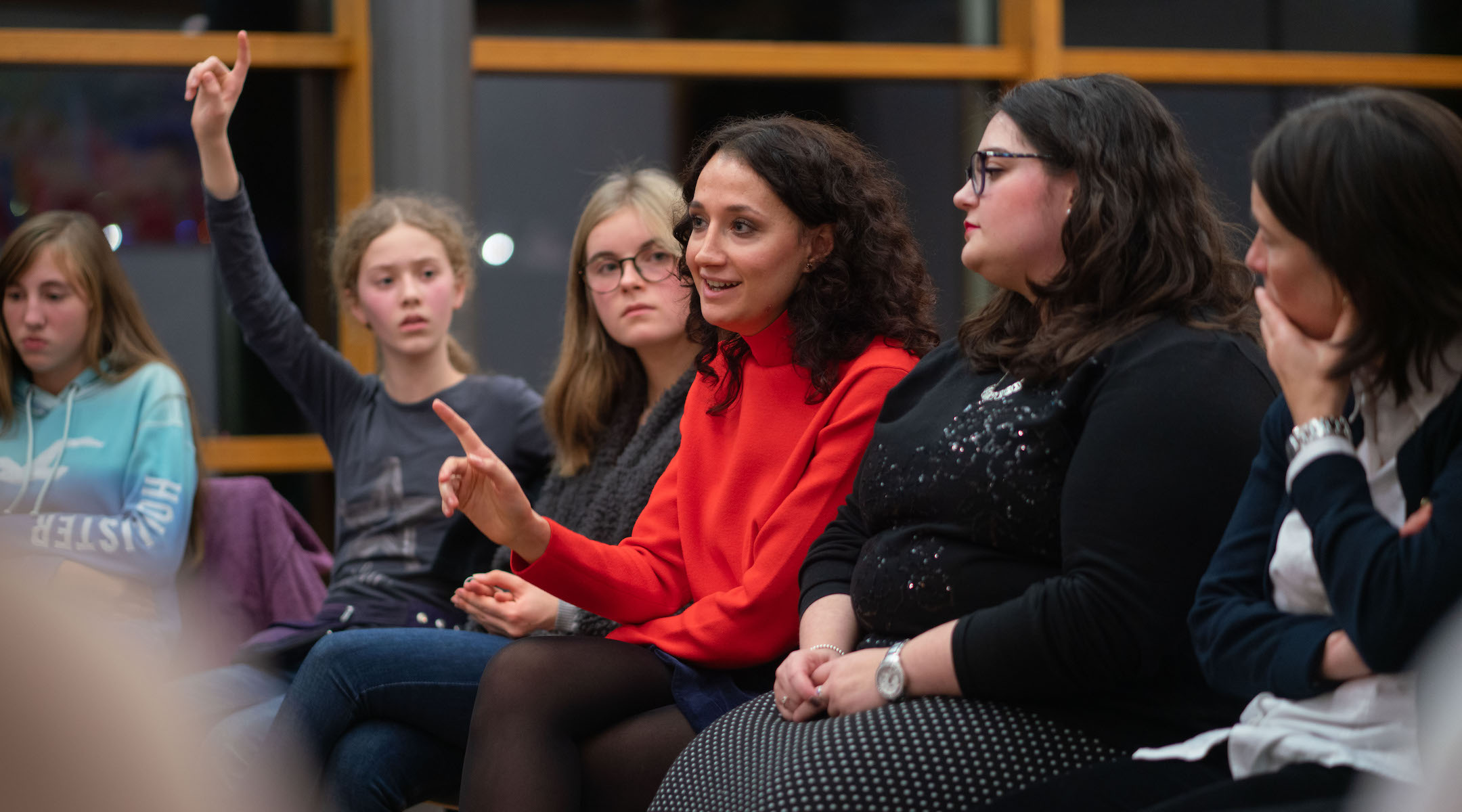 Volunteers with a program now called Meet a Jew talk with non-Jewish students at a school in Frankfurt, Nov. 5, 2019. (Frank Rumpenhorst/picture alliance via Getty Images)
Advertisement

BERLIN (JTA) — There were approximately 30,000 Jews in the city of Frankfurt before World War II, making it the second largest community in Germany.

“Jewish life was destroyed,” said Tobias Freimuller, author of the recently published “Frankfurt and the Jews,” a history of the community from 1945-1990.

Flash forward to 2020 and the Jewish community of Frankfurt is once again a powerful force in the city, one of Germany’s largest and a major business hub.

There are only about 6,600 Jews in the city of 753,000, but they have a political influence that other minority populations don’t. The current mayor, Peter Feldmann, is Jewish. Fighting anti-Semitism is a city priority. Jewish leaders are in regular contact with city leaders. When there is a tragic or otherwise newsworthy event, a representative of the Jewish community is always involved in the city’s response.

“If we open our mouth, everybody listens,” said Leo Latasch, a professor of medicine who oversees social affairs and security, among other things, for the Frankfurt Jewish Community organization. “We have an excellent relationship with the democratic parties.”

Freimuller, deputy director of the Fritz Bauer Institute — a Holocaust research center affiliated with the city’s Goethe University — chronicles the Jewish resurgence in his book, which was published on April 15.

It’s a complex narrative, say members of the Jewish community and those close to it, because the Nazis’ destruction was so complete; a Jewish presence had to be rebuilt with help from the outside.

“Rebirth sounds like a revival of the community,” said Esther Schapira, a journalist and filmmaker who grew up in Frankfurt. “That is not the case.”

The originals and the DPs

After the war, the Jews remaining in Frankfurt were of two types. There were the few survivors who founded today’s Frankfurt Jewish Community organization in 1947 and envisioned returning to the roots of the community that existed before the war. That group consisted mainly of assimilated Jews who saw themselves as German and were often married to non-Jews.

Those Jews were called the Alteingesessene, or the long-established ones, said 30-year-old Laura Cazes, an employee of Frankfurt’s Zentralwohlfahrtsstelleder Juden in Deutschland, or ZWST, a Jewish social welfare organization.

“They were essential but there were very few,” Cazes said. 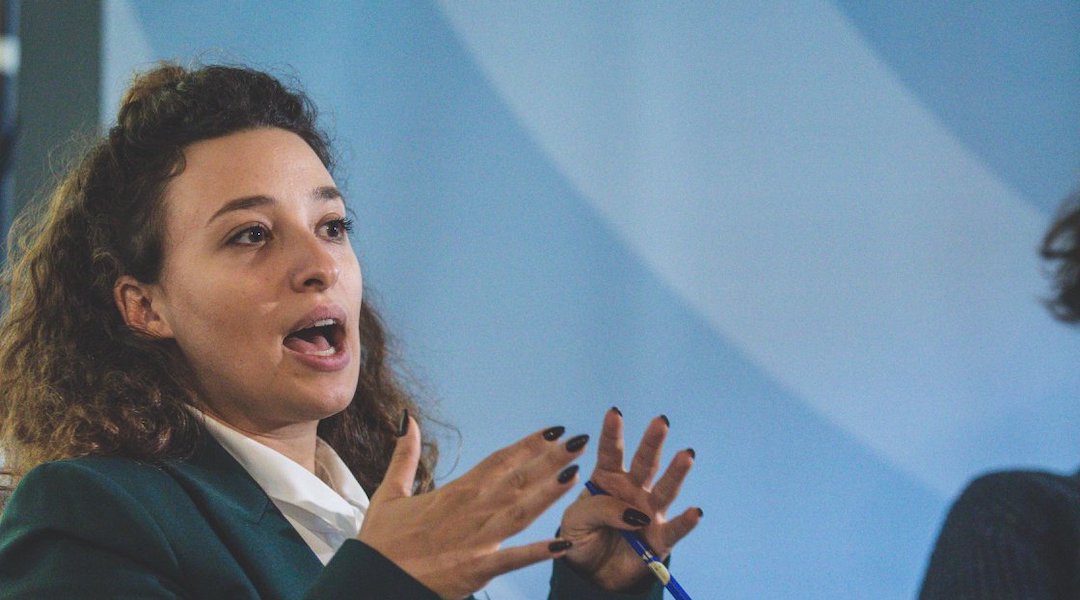 Then there were the displaced persons, or DPs, who came from across Eastern Europe. Many ended up in Frankfurt as a pitstop en route to the United States or then-Palestine, but immigration wasn’t initially possible. Instead, tens of thousands of Jewish DPs spent years in DP camps, such as Frankfurt-Zeilsheim.

The situation changed in 1948, when the British Mandate in Palestine gave way to the founding of the State of Israel and the United States adopted the Displaced Persons Act, opening its borders. Most DPs left Germany, but not everyone was able to make the journey.

“Some stayed for a variety of reasons,” Freimuller explained. “Because they were too old, too sick, because they couldn’t speak English or Hebrew, or maybe because they ended up starting a small business or found another way to start making money.”

In 1949, the community organization combined with the Committee of Displaced Persons. There were about 2,000 Jews in total between the two groups. 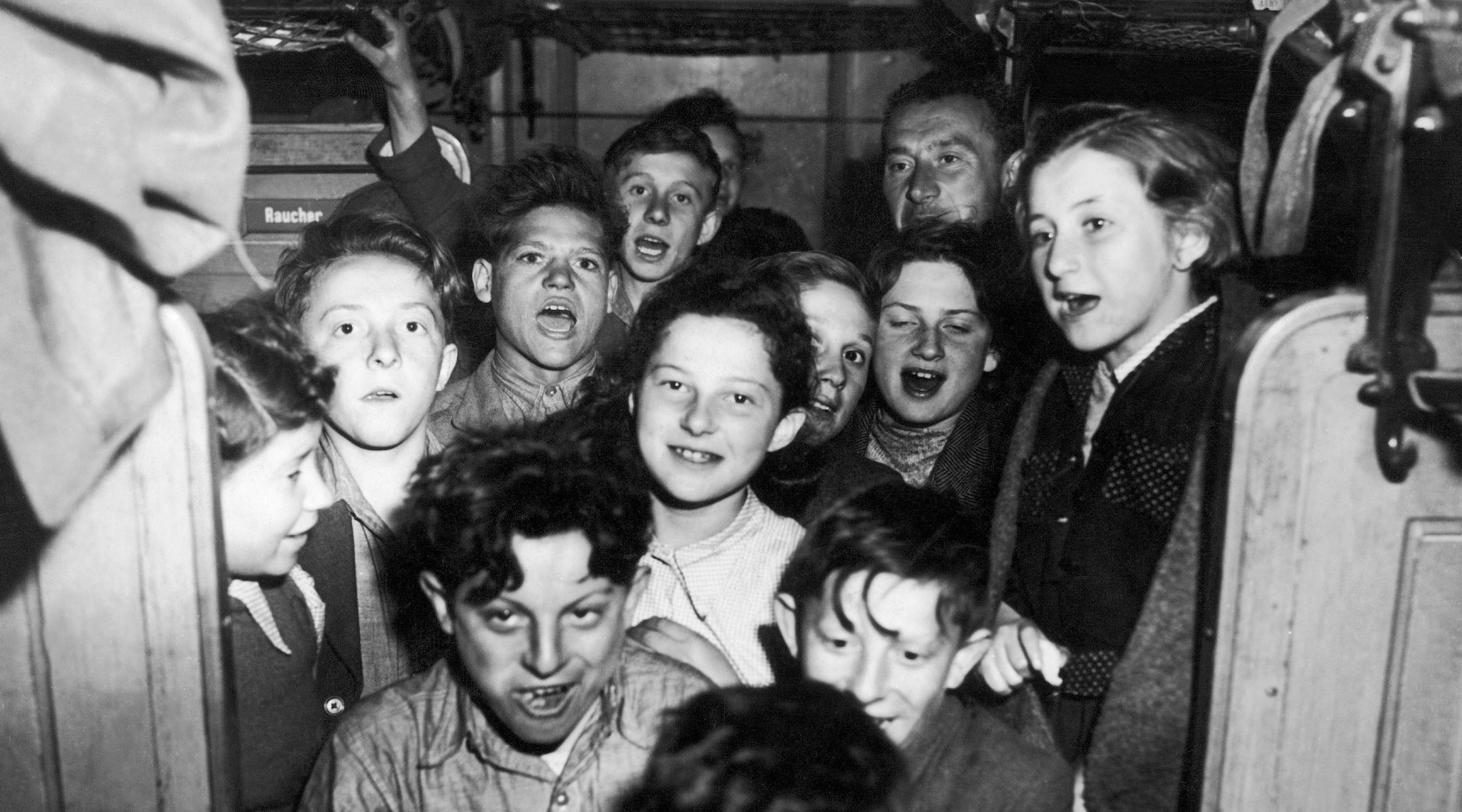 On April 13, 1946, 1,000 Jewish orphans whose parents were killed in the Holocaust left Frankfurt for then-Palestine. (Keystone-France/Gamma-Keystone via Getty Images)

“What’s interesting is that hardly anyone in the Jewish community at the time came from the city,” said Freimuller. “The number of alt-Frankfurter [or “original Frankfurters”] was quite low. That means that few in the post-war Jewish community saw Frankfurt during Nazi rule. It was a completely new start and something the founders couldn’t have imagined.”

After the founding of the Bundesrepublik in 1949, West Germany passed legislation to start the process of compensating Holocaust survivors. Freimuller called it “a signal in front of the German elite, the press, and the people that Jewish life would be protected.”

With that help, the Frankfurt community began to build and expand.

“Most of them were survivors, or children of survivors from Poland, Hungary, Czechoslovakia, Romania,” Cazes said. “The Jewish community that was built in Frankfurt after the war has a very different identity.”

By most accounts, Jews in Frankfurt avoided the spotlight for the first several decades following the war. Freimuller said that Jewish institutions carefully toed the line and were withdrawn in public life. They didn’t discuss what happened to their families.

But that changed in 1985, during what Freimuller refers to as a key turning point in the history of Jews in postwar Germany. 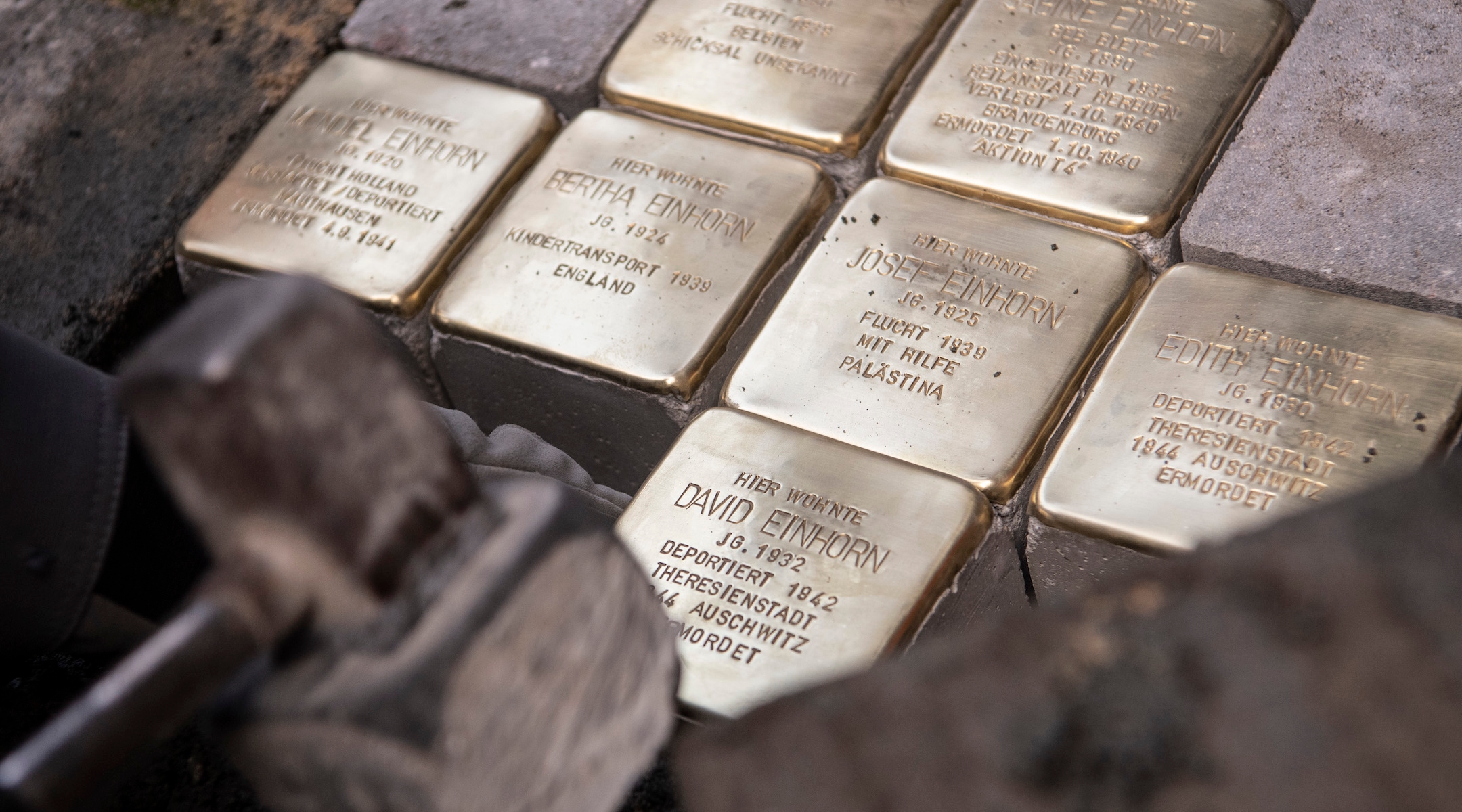 The ‘coming out’ moment

In the 1960s, city planners redesigned the formerly bourgeois Westend neighborhood, which was heavily Jewish until the 1930s. The neighborhood was only slightly damaged during the war and many of its 19th-century upper-class homes were still standing. But in the 60s, the city wanted to build commercial high-rise buildings along the central corridors of Westend because the neighboring city center was overcrowded.

The city started by ripping out old homes and putting in office buildings, but this led to protests — squatters stayed in the homes scheduled for demolition, and other protestors clashed with police in the streets.

Many of the realtors involved in the new developments were Jewish, and that led to what Freimuller calls “anti-Semitic undertones” in public life.

In the 1970s, prominent playwright Rainer Werner Fassbinder wrote a play inspired by the neighborhood conflict. The play, “Garbage, the City and Death,” was protested for its perceived anti-Semitic main character — a real estate speculator named Der reiche Jude (“The rich Jew”).

Though the play was published, its premiere in 1975 was canceled after protests. The play wasn’t performed until 1985, but Jewish objections over the content remained and some took action during the first performance. They forged tickets to get into the premiere, and when the play began, they stormed the stage and prevented it from being performed.

Suddenly, Jews in Frankfurt had found their public voice.

“Many considered this spectacular action as a turning point for the representation of the postwar Jewish community,” Freimuller said.

Over the past 25 years, Jewish communities across Germany have benefited from an influx of immigrants from the former Soviet Union. Those families who came have left their mark in Frankfurt, though, he said — for example, there’s an annual festival that celebrates the Russian role in ending World War II.

Schapira, 59, whose work typically focuses on international perceptions of Israel, suggests that Frankfurt’s liberal ethos has allowed the new Jewish community to flourish, noting that it has welcomed Turkish immigrants as well. Millions of people with Turkish ancestry live in Germany, and more than half of Frankfurt’s citizens have immigrant roots. 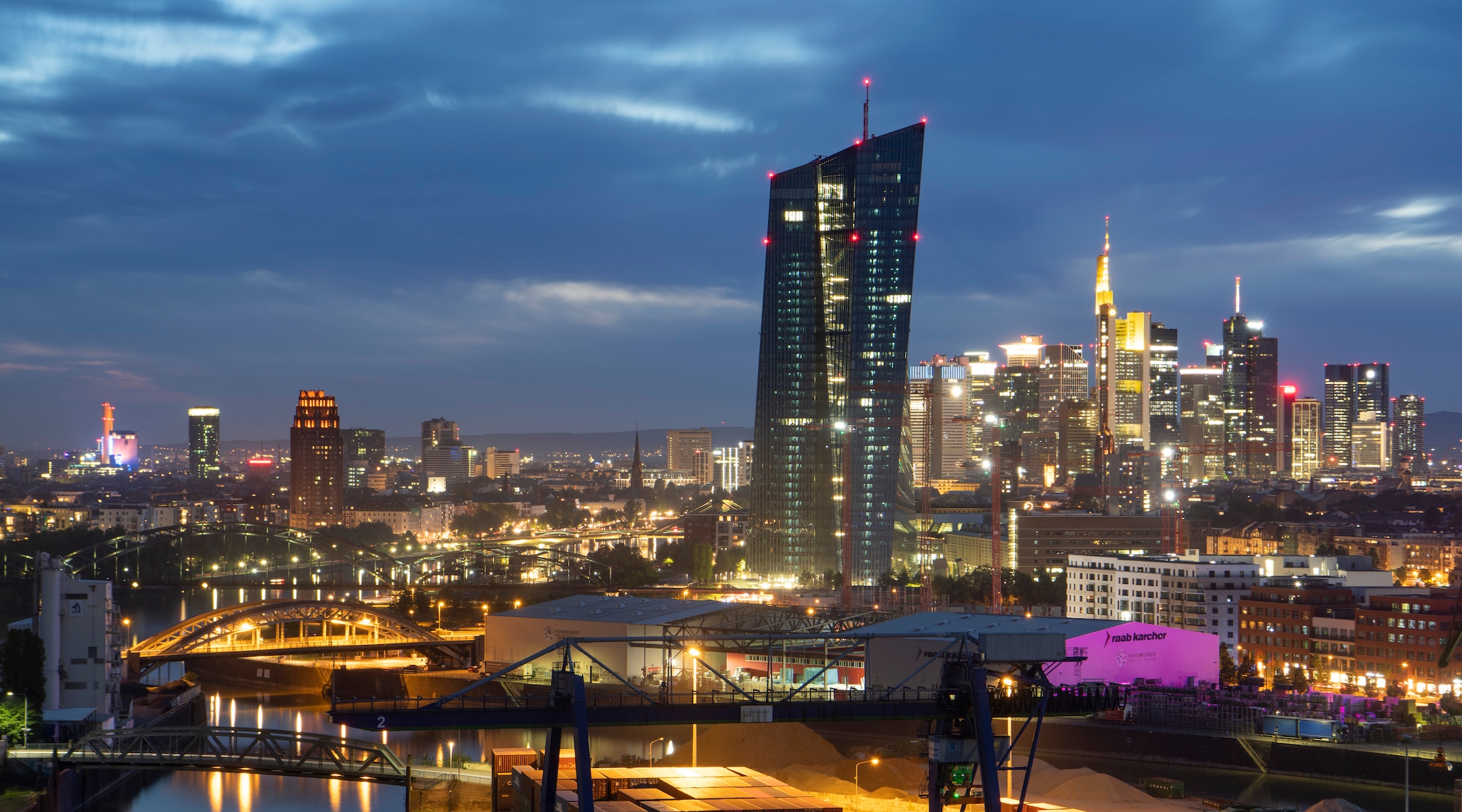 A view of the Frankfurt skyline, May 8, 2020. (Boris Roessler/picture alliance via Getty Images)

“Frankfurt has got a very liberal spirit,” Schapira said, adding that tensions with Muslim communities are not a big issue. “You have quite an open atmosphere that makes it possible for Jews to blossom again.”

The city is home to one large synagogue, three smaller ones and a prayer room at the airport. Latasch describes these as mostly Conservative — as opposed to Orthodox or Liberal, other common denominational terms used in Europe — but adds that there are “possibilities for people who are Orthodox or Liberal.”

Schapira’s father was a survivor from Romania who ended up in Frankfurt as a displaced person.

“They never intended to stay here or to live here,” Schapira said of her father and his peers. “It was just the waiting time until they were able to go where they wanted to go, which was mainly either America, Argentina, or Israel.”

But Schapira’s father was tired. He didn’t have the financial means or physical strength to make the journey overseas. So he established roots in Frankfurt and married a non-Jewish German woman.

Despite having been born and raised in Germany, Schapira says “the idea to leave the country” has always been in the back of her head.

“Don’t mix too much. Don’t get too familiar. Don’t feel too rooted. Be on alert. Be always ready not to miss the right moment to leave again,” were just some of the messages she says she learned from her father and others in the community.

Although moving had been a possibility for Schapira and her family, they ended up staying because, as her father put it, “Right now, this is the safest place for Jews to be, because the whole world is watching Germany.” However, in her next breath, she admits that this could always change.

The narrative shifts among the third post-Holocaust generation, represented by people like Cazes.

“There’s this image that people would talk about, that people were sitting on packed suitcases,” Cazes said. “Only the third generation started to unpack these suitcases.”

Cazes believes Frankfurt is the most Jewish city in Germany, if not in numbers then in spirit.

“The Jewish community has a very strong presence in the cultural field,” said Cazes. “It’s not an isolated community within the city. It’s very, very present.”

As much as the community has made its impact in contemporary Frankfurt, and as safe as it may feel, Schapira says that leaving is still something all Jews think about — no matter what generation they’re in.

“I think even for the third generation, this is true,” she said. “As much as they’ve unpacked the suitcase, they never threw it away, so it’s not such a big deal to pack again.”

Correction: This article originally stated that Frankfurt had the largest Jewish population before World War II. It was actually second to Berlin.