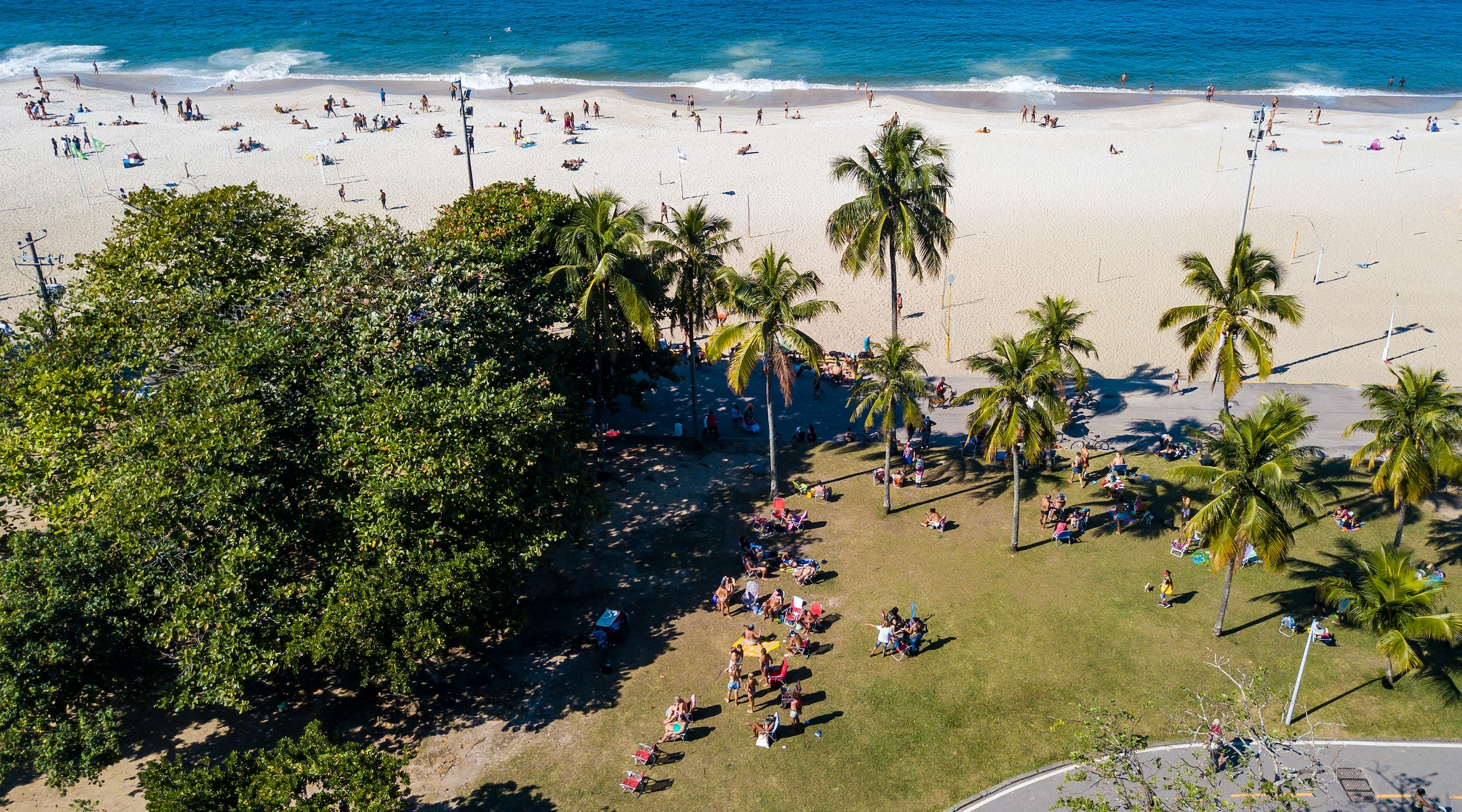 RIO DE JANEIRO (JTA) — The bombshell news on Tuesday was ironic for some — Brazilian President Jair Bolsonaro, one of the world leaders who has most staunchly downplayed the potential of the coronavirus pandemic, had contracted the virus.

Despite his ardent support of Israel, Bolsonaro’s tempered rhetoric on the virus and controversial moves to cope with the pandemic — including fiercely criticizing stay-at-home measures implemented by Rio de Janeiro and other state governments, and saying that a weakened economy could kill more than the virus — have raised eyebrows even among his most passionate conservative Jewish supporters.

As of June, the country of 215 million people that is home to some 120,000 Jews had the second-highest number of confirmed coronavirus cases in the world behind the United States: nearly 1.6 million, including some 65,000 deaths.

In March, the Rio Jewish federation established its own crisis committee to advise the state’s 30,000 Jews. Along with being a state, Rio is Brazil’s second largest city and second largest Jewish community, behind Sao Paulo. It’s home to some of the nation’s most famous landmarks, such as the Christ Redeemer statue and the Sugarloaf Mountain, and boasts some of the country’s most storied Jewish institutions, such as the Great Israelite Temple and Brazil’s largest Jewish day school, the 1,400-student Liessin.

“Despite the governmental guideline allowing religious temples to reopen, we have told all synagogues to wait longer and our request has been met,” the federation’s president, Arnon Velmovitsky, told the Jewish Telegraphic Agency. He reiterated this sentiment in a statement this week.

Here’s how Jews in Rio have responded to dealing with the virus that has taken Jewish institutions online. 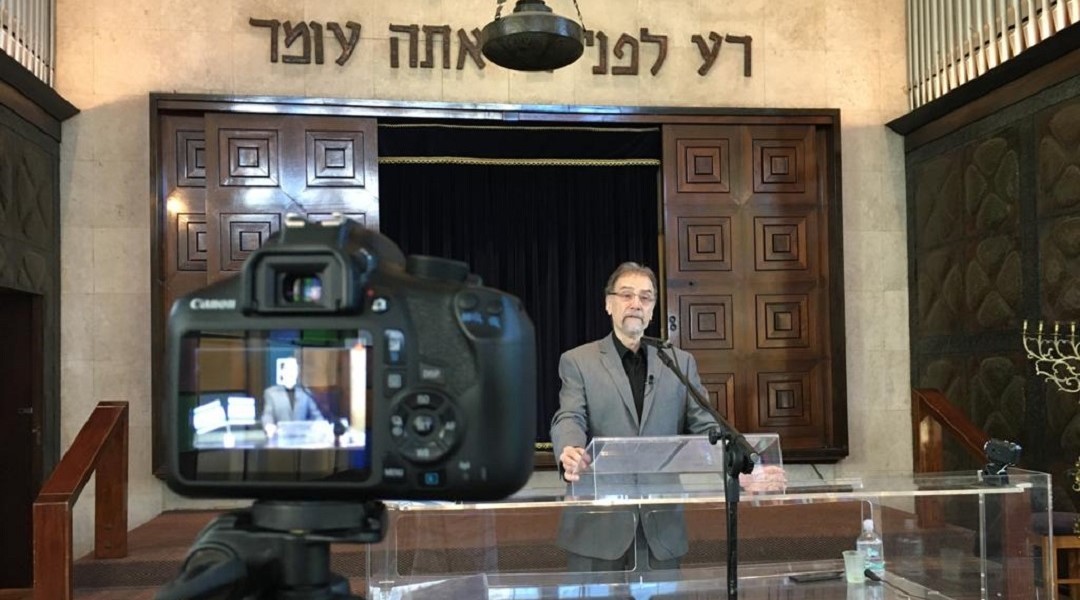 Rio’s largest synagogue, the 1,000-family Associacao Religiosa Israelita, has been garnering over 500 people on its regular Friday evening livestreamed religious services. It’s so popular that the president of the Reform temple, which was founded in 1942 by German Jewish families, says it will keep streaming services online after the pandemic.

“Our online religious services stem from what was a unanimous decision by our board and rabbinate,” Gilberto Lamm told JTA. “They are here to stay. When COVID-19 is over, we’ll have both onsite and online.”

Orthodox synagogues in the city have been holding pre-Shabbat and Havdalah celebrations, which are presented before and after the hours in which the use of electricity is prohibited by Jewish law.

Temples from all streams offer an array of live and prerecorded material, including prayers, lectures and classes. Since the pandemic started, the Israeli Independence Day, Lag b’Omer and Shavuot observances were celebrated online, and Zoom, Facebook and Instagram have been the favored platforms for Jewish institutions.

“The receptivity to our livestreams has been very great,” said Gabriel Aboutboul, chief rabbi of the Edmond Safra Synagogue, an Orthodox temple located a few blocks from the iconic Ipanema beach. “There are many people who did not have a chance to attend an event in the synagogue and now they can. We’re bringing our community together.”

Immigration to Israel could spike 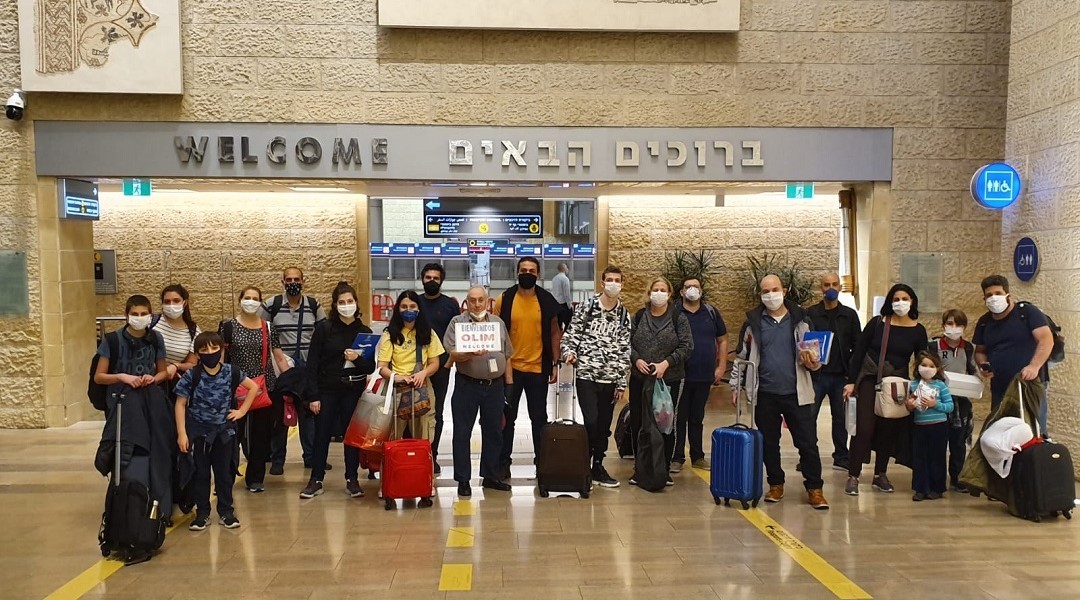 A group of 23 Brazilians immigrated to Israel on a flight that went through Ethiopia in May. (Olim do Brasil NGO)

Brazil is regularly among the top 10 list of countries that send the most immigrants to Israel every year. In 2019, nearly 700 Brazilians moved to Israel — a record that has stayed almost constant for three years in a row. Through May, 280 Brazilians had immigrated to the Jewish state this year, but that pipeline has been nearly shut down.

“Most people are very frustrated because they should already be in Israel. We can’t tell anything for sure now, we have no crystal ball. It’s all a big question mark,” said Sprintza Laim, the head of the Jewish Agency’s Aliyah department in Rio. The Jewish Agency is a nonprofit that among things facilitates Jewish immigration to Israel.

Still, immigration could increase throughout the year, especially if the COVID-19 situation in Brazil worsens.

Last year, 750 Brazilian families opened aliyah files — meaning they began the process of gathering personal and religious documents needed for immigration. The 2020 tally is expected to reach up to 1,200, according to the Jewish Agency.

Rio alone currently accounts for some 45%, although it is home to only half the Jewish population of Sao Paulo.

Laim said the Jewish Agency offers livestream events to introduce prospective immigrants to each other.

“There is a very high level of anxiety, which is cooled down when people meet others who are experiencing the same situation,” Laim added.

Danielle Tarnovsky was among the 23 Brazilians who landed in Israel on a flight via Ethiopia in May. She was quarantined in a Tel Aviv hotel for 14 days, as mandated by Israel, from which she gave a testimonial during a live broadcast on social media with Olim do Brasil, a nonprofit that helps her countrymen.

“We had a thousand obstacles, many people would’ve given it up, but I was loyal to my goal,” Tarnovsky said from her new home in Nahariya. “Rio is not doing well in terms of health. We left the virus behind.”

Jewish schools: E-learning and a “Barmobile” 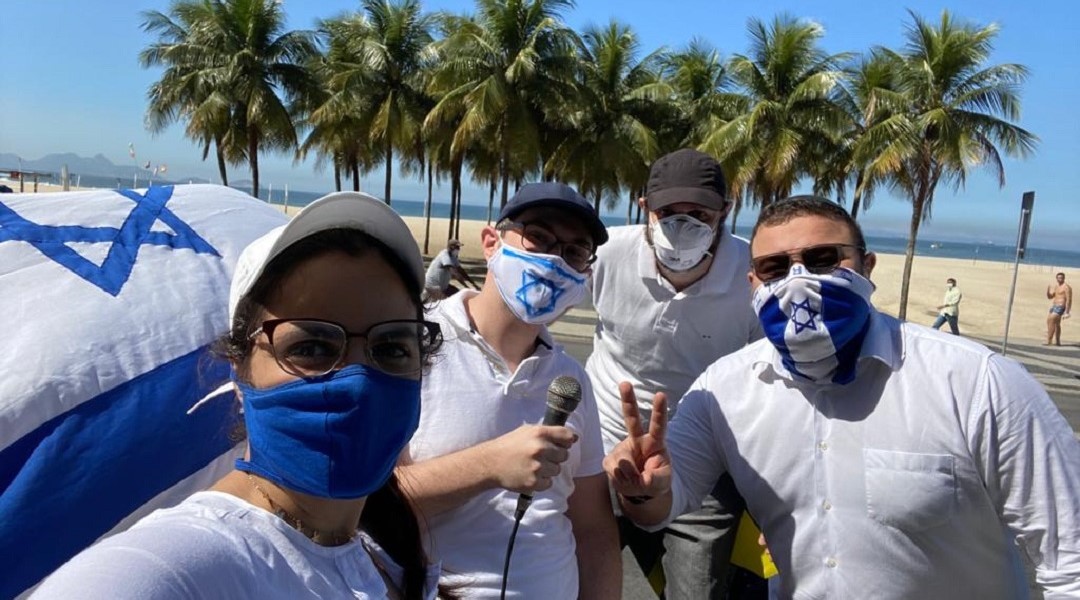 Barilan representatives stand on the school’s “Barmobile” at a stop in Rio. (Courtesy of TTH Barilan)

While several private schools in Rio are providing prerecorded classes, Jewish day schools have stood out for providing real-time classes. They’re using e-learning platforms such as Google Meet and Zoom supported by the Google Classroom platform.

“The result is above our expectations,” said Celia Saada, the principal of Liessin, which has three campuses. All the Jewish schools in Brazil run from preschool to high school.

“Junior high and high school students have responded very quickly and positively. From first to fifth grade, it was a gradual thing. Preschool was our biggest challenge.”

TTH Barilan, an Orthodox school, recently posted on Facebook some numbers documenting the school’s efforts to keep things running during the first three months of the pandemic. There were nearly half a million emails and files exchanged; almost 7,500 classes on Google Meet that took more than 250,000 minutes; nearly 42,000 views of class videos on social media; and more.

“Our teachers reinvented their teaching practice, families found ways to organize their homes to the new reality, students took a leap of responsibility and autonomy to keep up with the new school dynamics,” said TTH-Barilan’s principal, Andre Frank. “The pandemic will pass, but the legacy will remain.”

In May, the school reached out to its 400 quarantined students to celebrate Israel’s Independence Day with what they nicknamed the “Barmobile” — a mashup of the school’s name and Batman’s Batmobile. The car paraded through the city, playing Jewish music and reading inspiring messages and tips on how to protect from the virus through a microphone.

“Since students cannot come to school, our school went to them,” said its president, Rafael Antaki. 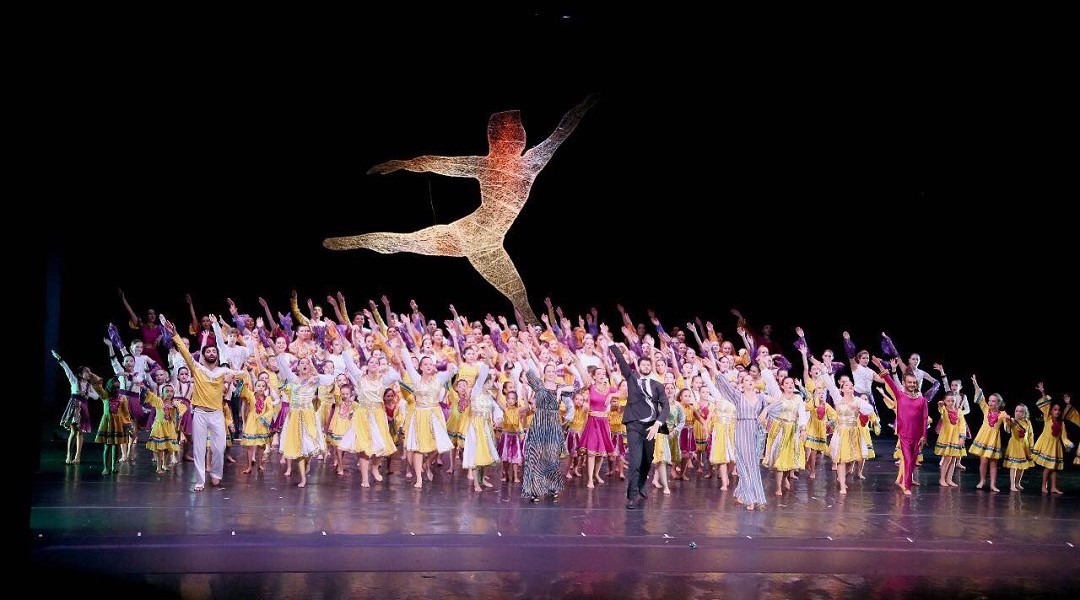 Dancers from the Kineret Institute, before the pandemic. (Courtesy of Kineret)

COVID-19 has turned this world upside down — especially since holding hands is one of the key principles of Israeli dance. The 50th edition of the Hava Netze Bemachol festival, Rio’s largest Jewish annual event, has been postponed due to the virus.

“We now hold regular classes on Zoom. We’ve been recording the choreographies for our pupils to rehearse at home and training our instructors during the quarantine,” said Daniel Adesse, the founder of Kineret Institute, an Israeli dance school that gathers some 250 dancers who perform in Brazil and the United States.

For choreographer Sandra Libaber, who teaches at several Jewish institutions, including the Liessin and Barilan schools, the adherence to Zoom lessons is not the same.

“Memorizing the steps is hard, but the joy and the sense of belonging are of great value,” she told JTA. “Letting Israeli dance enter our homes in this time of social isolation boosts mental health, energy and love.” 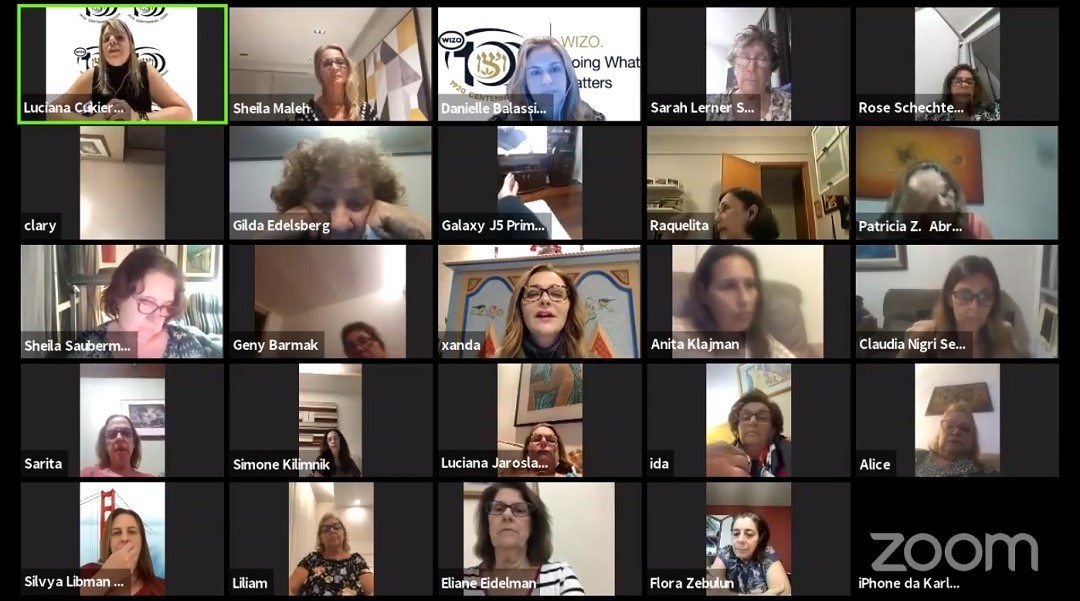 The Women’s International Zionist Organization, based in Rio, often hits the limit of 100 participants in its meetings. (Screenshot/Courtesy of Wizo)

The Women’s International Zionist Organization, a group of 1,500 activists from across the country whose headquarters is in Rio, is still holding a wide range of initiatives to raise funds for educational projects.

Lectures, panels and courses around Jewish values, Israel-related topics and more are now livestreamed on Zoom, which the activists – known as chaverot, the Hebrew word for female friends – have nicknamed WiZoom.

“We depend on fundraising events,” Danielle Balassiano Ptak, vice president of the Rio chapter, told JTA. “With everything closed, we must find our ways around it.”

The events constantly reach the Zoom limit of 100 participants. The goal is to plan campaigns to collect funds on the calls, but also to share the tough personal challenges imposed by COVID-19.

“Younger chaverot regularly call the older ones and ask how they are, what they need or simply listen to one another,” Balassiano Ptak said. “They just need to talk and keep mental sanity.”