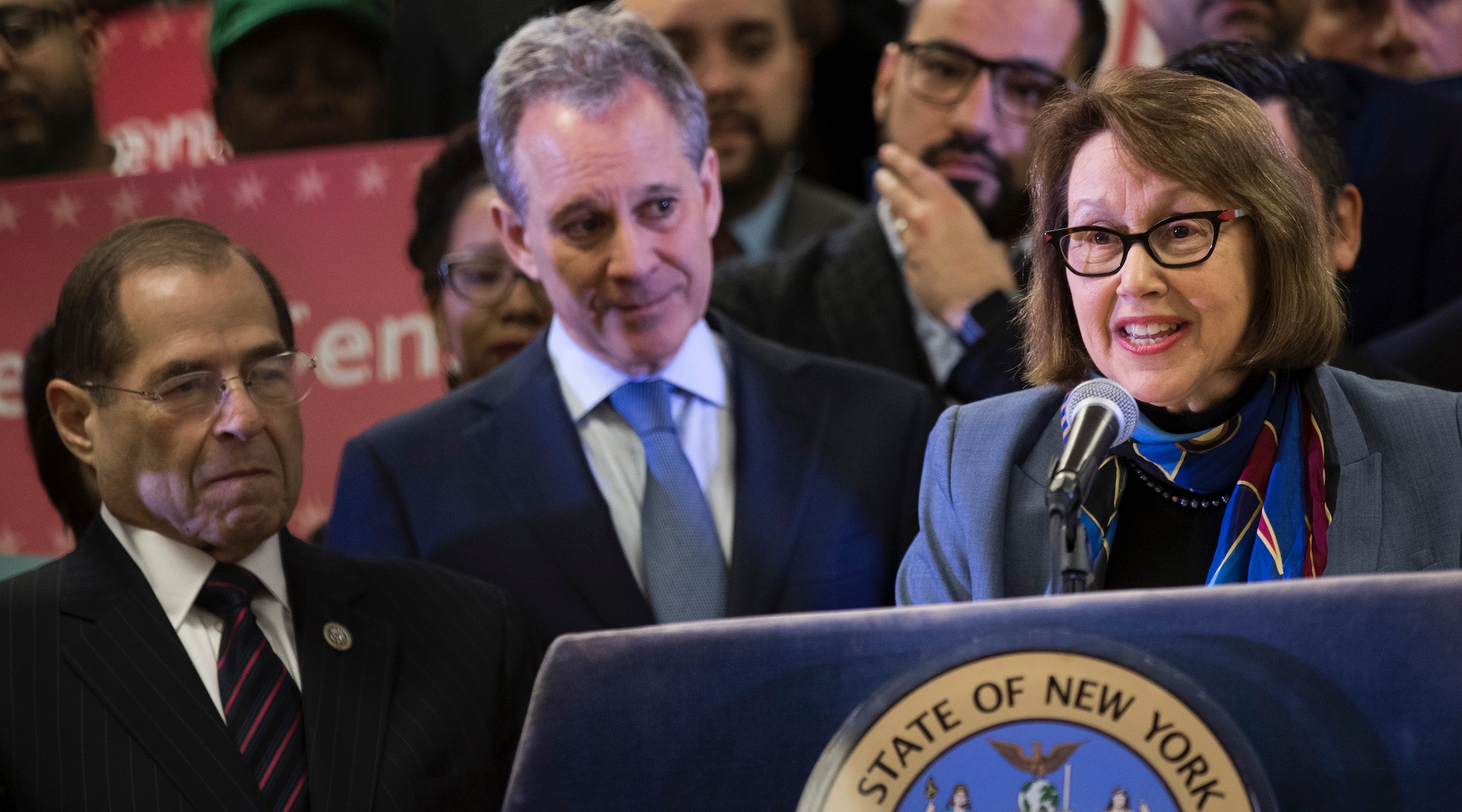 Oregon Attorney General Ellen Rosenblum speaks at a news conference in New York City to announce a multi-state lawsuit to block the Trump administration from adding a question about citizenship to the 2020 census, April 3, 2018. (Drew Angerer/Getty Images)
Advertisement

(JTA) — From the mayor to the governor to House Speaker Nancy Pelosi, many in positions of power want to stop the Trump administration’s crackdown on protesters in Portland, Oregon.

The person in the best position to make it happen now is the state’s Jewish attorney general, Ellen Rosenblum.

On Friday, Rosenblum sued the Department of Homeland Security, Customs and Border Protection and other federal agencies, accusing them of civil rights violations. She’s also seeking a restraining order that would halt the detaining of demonstrators.

President Donald Trump has said that the officers from those agencies are there to curb unrest and protect federal property in the city after more than 50 days of protests for racial justice. He has suggested doing the same in other large cities, like Chicago and New York, over the objections of local officials.

Rosenblum says the intervention is an affront to democratic values. If her legal action succeeds, it could provide a playbook for other  attorneys general who want to block the move in their jurisdictions.

“The federal administration has chosen Portland to use their scare tactics to stop our residents from protesting police brutality and from supporting the Black Lives Matter movement,” she said in a statement about the lawsuit. “Every American should be repulsed when they see this happening. If this can happen here in Portland, it can happen anywhere.”

The suit is the latest step in Rosenblum’s fight against unfair treatment and on behalf of constituents she feels are marginalized. Rosenblum is a former board member of Portland’s largest and oldest synagogue, Congregation Beth Israel, a former singer in its choir and the founder of its book club.

Fellow congregants, and others in the local Jewish community, say her response to the federal forces doesn’t surprise them.

“She believes in justice, and she’s not one to shrink from doing what needs to be done, and she does it with a smile and a very lovely demeanor,” said Ellen Bick, a friend of Rosenblum and a past president of the synagogue Sisterhood. “Every time I’ve seen her she’s just been a lovely person, even when someone asks some tough questions. She answers, and she looks to make it a win-win.”

The synagogue’s rabbi, Michael Cahana, is similarly outraged by the federal intervention in his city.

“The actions that these federal forces are using are a complete affront,” he said. “These are the kinds of tactics that are used in dictatorships, and this is something that absolutely does not belong on our streets or on the streets of any city in the United States.”

On Friday, 10 Oregon rabbis who are members of T’ruah, a liberal rabbinic human rights group, sent a letter to the acting Homeland Security secretary, Chad Wolf, calling for a withdrawal of the federal forces. They cited Jewish text in opposing “governments and ruling powers taking advantage of those whom they are charged with serving and leading.”

“We’re all afraid, and yet we are also outraged,” said Rabbi Ariel Stone, who signed the letter and convened a group called Portland Interfaith Clergy Resistance, which has been attending the downtown protests. “You have to go ahead and stand up for what’s right anyway. Nobody wants to spend their evenings this way.”

She added, “We’re downtown because there is terrible injustice going on.”

Rosenblum, 69, the first Jewish attorney general in Oregon and the first woman to have the job, makes a point of advocating for more opportunity for women and minorities. The native of Berkeley, California, is a graduate of the University of Oregon’s law school, and served as a judge for two decades before winning the 2012 election for her current post. She is running for a third term this year.

In interviews and speeches, Rosenblum talks about being part of the first Oregon Law class with more than just a handful of women, and of her fight against sexism — including an instance when, as a judge, she was mistaken for a secretary by a male lawyer.

“It was as if female college seniors had suddenly taken note that there were virtually no women lawyers, and that perhaps we could do something about that,” she said in a 2014 speech to the Oregon Area Jewish Committee, as reported by Oregon Jewish Life. “There was this pervasive – and wonderful – sense that the law was the best agent for social change.”

Part of the change she’s tried to make as attorney general has been in fighting the Trump administration. Rosenblum was among the attorneys general who successfully brought suit against Trump’s travel ban, and has also fought for the DACA program for undocumented immigrants who came to the United States as children.

“Let’s face it: The rule of law is under siege,” she said in a commencement address last year to her alma mater’s law school. “Or, if you think that’s an exaggeration — I don’t — at a minimum, the basic underpinnings of our democracy are being challenged as never before — at least, in my lifetime.”

Rosenblum also has encouraged the reporting of hate crimes and pressed law enforcement bodies to do better in investigating and prosecuting them. In May 2018, she established a state task force on hate crimes. In one session for victims to describe their experiences, a neo-Nazi confronted Rosenblum claiming to be a victim of hate. In response, according to the local Mail Tribune, she “gave little reaction beyond pursed lips and furrowed brows.”

In the 2014 speech to the Jewish group, she said the biblical mandate to pursue justice “is part of our DNA and what we learn if we are at all learned in Judaism.”

Her synagogue, which has also counted Oregon Sen. Ron Wyden and Rep. Suzanne Bonamici as members, has a history of encouraging public service. Another longtime congregant and local elected official, Multnomah County Commissioner Sharon Meieran, was teargassed during protests on Saturday night, according to an account she posted on Twitter.

Rosenblum also makes a point of being at Beth Israel’s annual Friday night service in honor of Martin Luther King Jr. Day. The synagogue has brought in prominent civil rights activists as speakers and the attorney general has sung with a visiting gospel choir.

“I think that she is really pleased that we’re a congregation that’s very vocal about social action and about putting our Jewish values out into the community,” Cahana said. “Singing those gospel songs in a Jewish service and connecting them to our prayers as well, and to be a part of hearing these great heroes of the civil rights movement, I think that has been something that’s been very meaningful to her.”