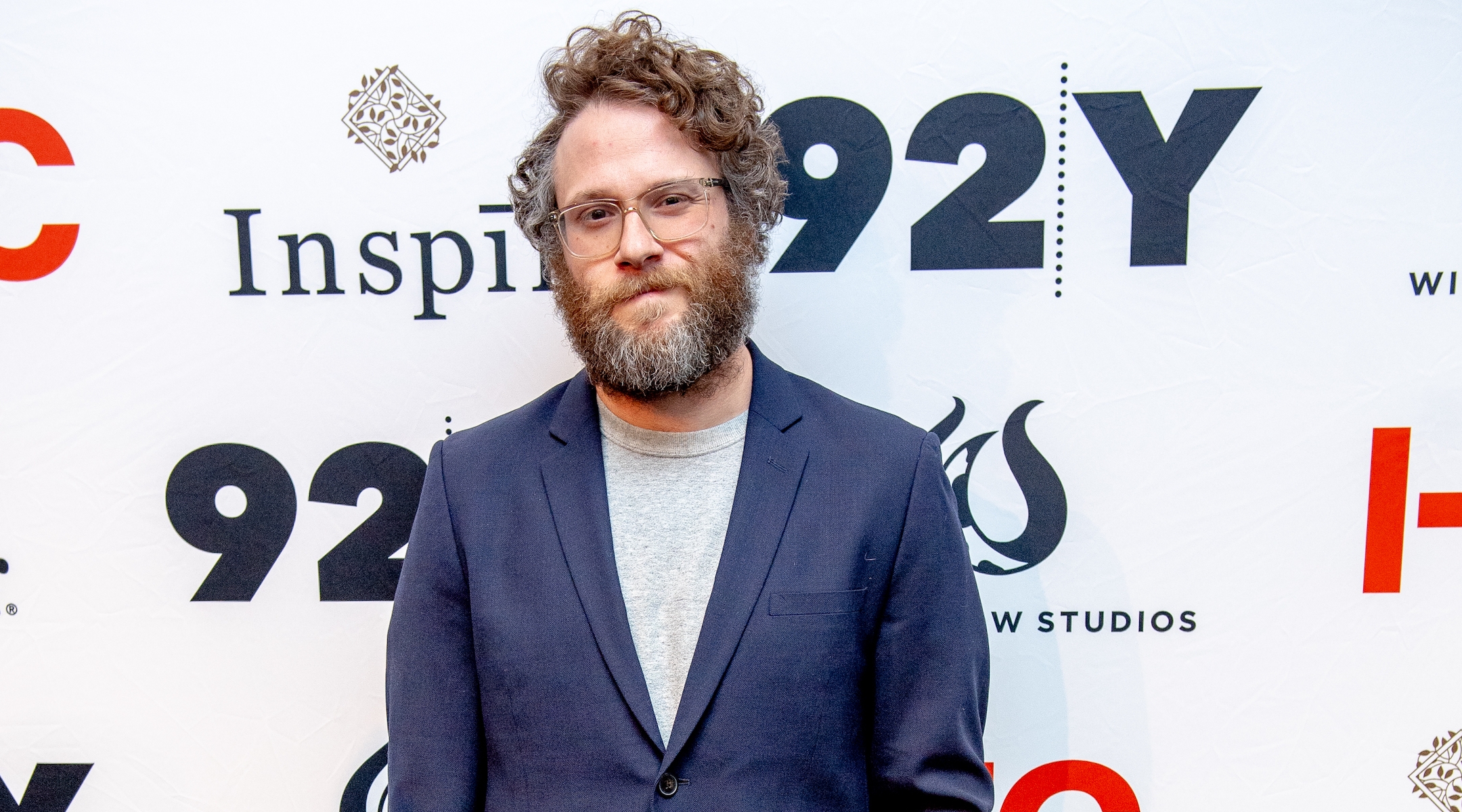 (JTA) — Marc Maron warned listeners at the beginning of the latest episode of his “WTF” podcast on Monday: “If you don’t like Jews, you’re gonna get triggered.”

It was a fair disclaimer, given that his hour-long conversation with Seth Rogen touched on just about every general aspect of modern Jewish identity, from Jewish summer camp to cultural Jewishness to sitting shiva.

But a second warning came part of the way through the episode, as the conversation turned to Israel. “We’re gonna piss off a bunch of Jews,” Maron said.

Rogen, who grew up attending Jewish schools and Jewish camp in Vancouver, said he was “fed a huge amount of lies about Israel” and questioned why the state should exist. Maron, who often references his Jewishness in his standup comedy material, concurred.

Rogen: To me it just seems an antiquated thought process. If it is for religious reasons, I don’t agree with it, because I think religion is silly. If it is for truly the preservation of Jewish people, it makes no sense, because again, you don’t keep something you’re trying to preserve all in one place — especially when that place is proven to be pretty volatile, you know? “I’m trying to keep all these things safe, I’m gonna put them in my blender and hope that that’s the best place… that’ll do it.” It doesn’t make sense to me. And I also think that as a Jewish person I was fed a huge amount of lies about Israel my entire life! They never tell you that — oh by the way, there were people there. They make it seem like it was just like sitting there, like the fucking door’s open!…They forget to include the fact to every young Jewish person.

Maron: I get frightened to talk about it.

The entire conversation was what Maron called “the most Jewy talk” he has had on his popular podcast, which has aired over 1,100 episodes. Rogen was on the show to discuss his upcoming film “An American Pickle,” about a Jewish immigrant who falls into a vat of pickles in New York in 1919 and wakes up 100 years later.

Here’s some of what else they discussed:

Rogen: My grandfather was a plumber. I come from a line of like very tough blue collar Jews as well. My grandfather played professional football in Canada and he was a plumber… my great-grandfather from the other side was a mailman, and they were tough! And that was a lot of actually where the idea for the movie came from. Simon Rich, the writer, was like, “I was looking at an old picture of my grandfather when he was my age, and I couldn’t help but think if we knew each other he would f***ing hate my guts, and probably beat the living shit out of me”… And my grandfather, they were nice to me, but you could tell, like, he thought I was soft.

Maron: I’ve always had a theory about it, that there’s the stocky sort of proletariat peasant Jew, and then there’s the composer Jew, the math Jew. And I’m definitely not a math Jew, and I don’t think you are either…

On dating and marrying fellow Jews:

Rogen: I would have been totally happy marrying a non-Jewish person, it’s only coincidental that [his wife Lauren Miller is] Jewish, and it really bothers her when I say that. She wants her Judaism to have some value to me, even though it doesn’t, in any way, shape or form.

Maron: I don’t know if you would know if that’s true. I bet you wouldn’t be great with a non-Jew.

Rogen: There’s a familiarity I think to that… but also, I found myself being a real novelty to some of the non-Jewish women I dated, like it was “Oh wow” — like they had never been around a funny person before in their entire life… I’m no funnier than your average Jewish person’s uncle is.

On the power of shiva:

Rogen: As I get older, I appreciate that religion, you know, specifically revolving around death, like Judaism has a lot of protocol that is helpful…

Maron: The shiva thing is really kind of powerful…

Maron: Eat, it forces you to eat.

Rogen: It forces you to eat, and drink, and it is religion. It was one of those things where I was like, “Oh this is like a very useful tool that religion has created around a very painful thing and a lot of thought was put into this”… As silly as Noah’s Ark is, this is not silly, this is actually like a very well thought out, practical protocol to do after someone dies, whether you believe in it or not.

Rogen: I remember my dad frankly telling me “People hate Jews. Just be aware of that. They just do.” And it’s honestly something that I am so glad was instilled in me from a young age, because if it wasn’t, I would constantly be shocked at how much motherf***ers hate Jews, because they do! It is pervasive and it is prevalent and it is to many Jewish people so confounding that they don’t assume it’s true…I’ve tried to put a lot of thought into why it’s happened … People obviously hate people who do not look like them. … I think people also have a weird fear of people who look like them but do not believe the same thing they do fundamentally.

On how the “American Pickle” movie came to be:

Rogen: [Simon Rich] envisioned it as a movie with me… The first time I hosted “Saturday Night Live” was his first episode as a writer on “Saturday Night Live,” and we were both much younger than everybody else that was there at the time… So we kind of bonded, and then the short story came out, and a lot of people liked it but I think people saw it and maybe thought it was too weird to be a movie. But I talked to him about it and he was like, “I picture it as a movie and I picture it with you, and I picture you playing both characters… and it took me a long time to wrap my head around whether that was a terrible idea or not… It was a hard movie to crack, the tone is weird and it’s something that I wanted to spend a lot of time making sure we got right.