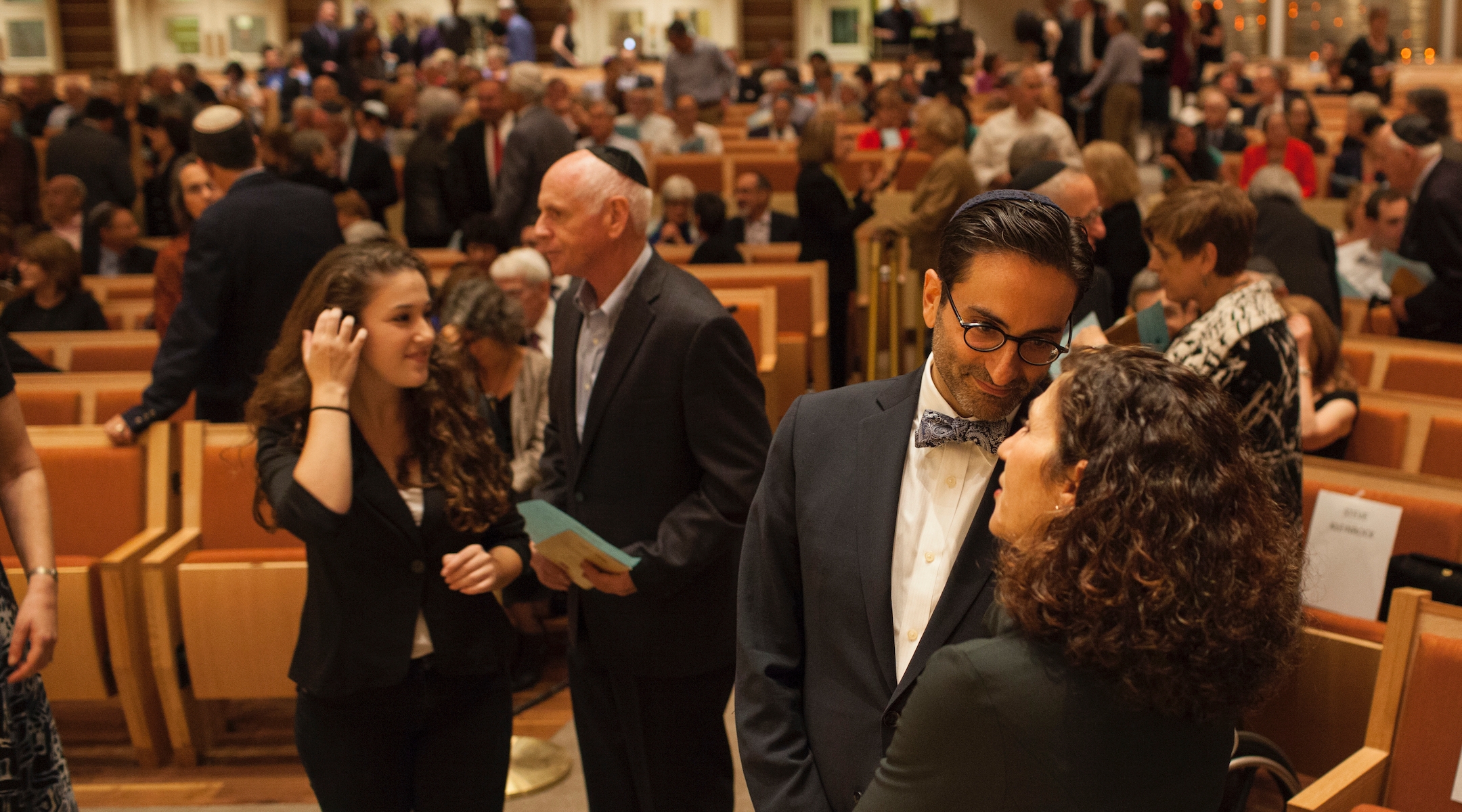 People crowd the sanctuary of Adas Israel Congregation in Washington, D.C., for a building dedication ceremony, Oct. 2, 2013. The synagogue is maintaining its annual dues this year but expects a budget shortfall. (Jared Soares/The Washington Post via Getty Images)
Advertisement

(JTA) — Like many synagogues, Temple B’nai Hayim used to rely on the High Holiday season to survive financially.

The small Conservative synagogue in Southern California would receive the lion’s share of its revenue in the run-up to the holidays: Members sent in their annual dues, which included entry to High Holiday services, and non-members purchased tickets just for the High Holidays.

But with the option of holding regular in-person High Holiday services off the table due to the coronavirus, the synagogue is anticipating a decline in revenue this year and responding by reimagining its financial model from the ground up. Going forward, as long as congregants give any contribution, they get access to everything the synagogue offers: High Holiday services, a bar/bat mitzvah ceremony, even religious school — virtually for now, someday in person. Annual membership dues, which once cost $2,000 per two-parent household, will be abolished.

“We know a lot of people are hurting, and even if they give us a penny, we know they are a true friend,” said Rabbi Jason van Leeuwen, the synagogue’s cantor. He added: “We should be worried, and I don’t think we should reasonably expect this new model to cover all of our expenses.”

Across the country, synagogues are bracing for a significant reduction in revenues. Though many are seeing increased attendance at virtual services, without the annual cash infusion that in-person High Holiday services bring, and with community members under financial pressure, congregations across the denominational spectrum aren’t sure how they’ll make ends meet this year.

“They’re expecting that their revenue will be down, in some ways, for the next year,” said Amy Asin, the Union for Reform Judaism’s vice president for strengthening congregations.

“Congregations are places, now more than they have been in the past, where people want to belong,” she said. “That doesn’t mean that they’re in a financial position to pay what they’ve paid in the past.”

Adas Israel, a 1,700-member Conservative synagogue in Washington, D.C., is expecting a 20% drop in revenue this year even as it has seen a spike in attendance at its online services. One recent Friday evening service had about 1,600 screens tuned in — or nearly one for each member household.

To keep congregants comfortable, the synagogue is not planning to increase its annual dues this year, which can run to more than $3,000. And it’s also hoping to save on expenses it no longer has, like food for kiddush after services. But whether Adas Israel can avoid any layoffs among its 170 employees as the synagogue moves into an unprecedented future remains unclear.

“My crystal ball broke a long time ago,” said Laurie Aladjem, the congregation’s president. “I believe that many of our members join and affiliate with Adas Israel not just for the High Holidays. We have a really robust education department both for children and adults. We have a preschool. We have a religious school that is bursting at the seams. We have really robust adult education programming.”

For many U.S. synagogues, a fixed yearly membership payment has usually included a High Holiday ticket, with nonmembers paying for a seat for the Rosh Hashanah and Yom Kippur services. (Discounts on fees are often reduced based on need, and few synagogues actively turn away those who want to attend services.) Because so many people generally pack the sanctuary on those days, the holidays are often the driver of synagogue revenue.

That’s true across denominations, though it’s especially pronounced in non-Orthodox congregations. Congregation Rodeph Shalom, a large Reform synagogue in Philadelphia, would get 150 or 200 people at its Friday night service — and 10 times that number on the night of Yom Kippur. Beth Jacob Congregation, an Orthodox synagogue in Beverly Hills, California, sees as many as four times its normal Shabbat attendance on the Day of Atonement.

“We hope people understand that when they are buying a High Holiday ticket, what they’re really doing is supporting the synagogue in its ability to exist throughout the year,” said Rabbi Jacob Blumenthal, CEO of the United Synagogue of Conservative Judaism and the Conservative Rabbinical Assembly.

On the whole, High Holiday revenue is less critical to synagogues than it used to be, according to Rabbi Daniel Judson, one of the authors of a 2016 UJA-Federation study which found that 57 synagogues nationwide had eliminated annual dues entirely and now just ask for donations. As more synagogues are making their High Holiday services free, they are less dependent on the revenue they once generated.

Judson said, however, that those who donate to synagogues around this time of year do so regardless of the fee structure, and this year will likely be tough going. Historically, he said, for a medium-size synagogue, 60% of annual revenue comes from annual dues.

“I think synagogues are less dependent on High Holiday revenue than they’ve ever been before,” said Judson, dean of graduate leadership programs at Hebrew College near Boston. “But it’s still part of the regular calendar that people pay their dues so that they’re ready for the High Holidays.”

Orthodox synagogues may have an advantage, as surveys show that Orthodox Jews are more likely to attend synagogue regularly rather than just for the High Holidays. Still, Orthodox synagogues may see a drop in revenue, said Rabbi Adir Posy, the Orthodox Union’s director of synagogue and community services. That issue, he said, could be particularly pronounced in large cities with big Orthodox communities, where families may bounce between synagogues and not feel a particular connection to one congregation.

“A larger percentage of our membership have robust connections to communal activity through the shuls throughout the whole year, so it’s a conversation that is not waking up for the weeks before the High Holidays,” Posy, an associate rabbi at Beth Jacob in Beverly Hills, said in discussing Orthodox synagogues in general. “That being said, we are seeing synagogues that are getting a lot more membership forms mailed back with associate memberships or limited things.”

Rodeph Shalom, the Reform synagogue in Philadelphia, has three membership tiers for its 1,000 members, and also allows for reductions if needed. It’s maintaining that system, but plans to make its livestream High Holiday services open to the public for free.

Senior Rabbi Jill Maderer said she isn’t sure what the lack of High Holiday tickets will mean for the synagogue’s bottom line, but believes that opening the prayers to the public is the right choice this year.

“We feel this is an opportunity to recognize people’s spiritual needs across the community, and to open our tent to the broader community,” she said. “I am concerned, and I am also extremely curious, as to whether people will show the commitment without that stick hanging over them. And I’m not afraid. I really believe in the community.”