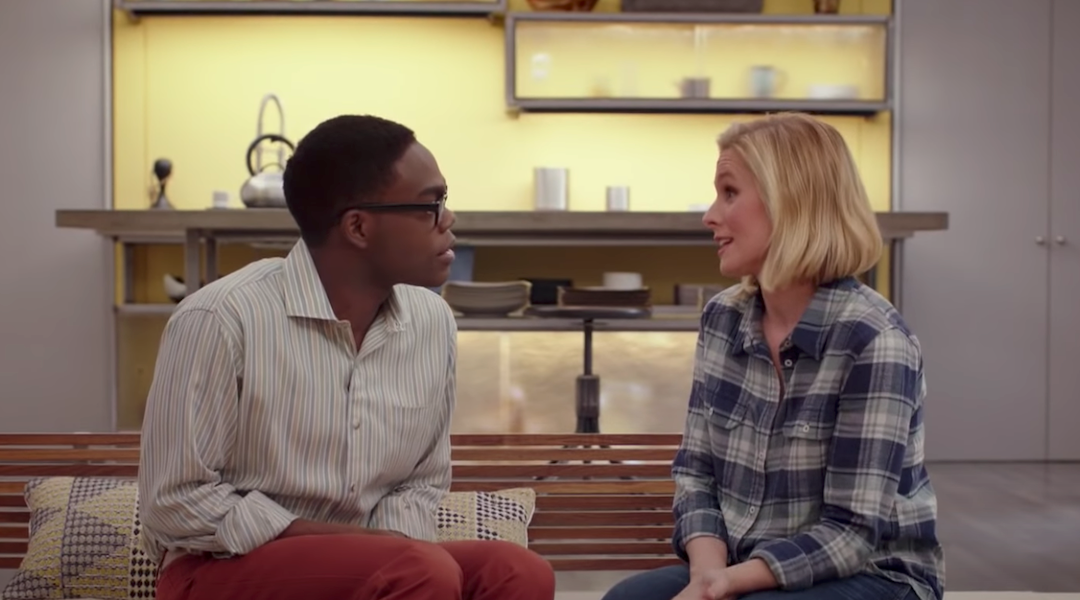 William Jackson Harper as Chidi and Kristen Bell as Eleanor on "The Good Place." (Screen shot from YouTube)
Advertisement

Social distancing and staying inside is hard. Thankfully, accessing good things to watch during this time is not. This is the latest installation of a weekly column on Jewish movies and TV shows that you should stream in quarantine.

Streams on: Seasons 1-3 are on Netflix, Season 4 is coming in September

(JTA) — The afterlife is not a major point of discussion in Jewish thought. Religious Jewish texts focus on the life one leads in this world — not the next one.

As Rabbi Hertzel Fishman, for example, has observed: “Mitzvot [commandments] are not magic, they do not help God nor do they earn us rewards, but they are valuable for the way in which they improve our character and thereby benefit the society in which we live.”

Thankfully, there’s a show that takes moral philosophy lessons like these and makes them bingeable.

“The Good Place,” which wrapped up its fourth and final season on NBC earlier this year, focuses on Eleanor Shellstrop (Kristen Bell), a garbage can of a person who accidentally winds up in “The Good Place,” a sort of secular heaven, after dying.

In this universe, everyone’s actions on earth are calculated and turned in a score. The Good Place is reserved for elite do-gooders who score very high. Everyone else is left to the aptly titled “The Bad Place.”

“Hindus are a little bit right, Muslims a little bit, Buddhists, Jews, Christians, Buddhists; every religion guessed about five percent,” says Michael, the architect of Eleanor’s neighborhood in The Good Place, played by Ted Danson. “You know how some people pull into the breakdown lane when there’s traffic, and they think to themselves, ‘Ah, who cares? No one’s watching?’ We were watching!”

Michael Schur, the show’s Jewish creator (who also worked on “The Office” and co-created “Parks and Recreation” and “Brooklyn Nine-Nine”), approached the plot as an ethical commentary on the afterlife rather than a religious one — although he told The Hollywood Reporter that he studied several religions while preparing the script.

Nevertheless, “The Good Place” teaches us about ethics — in a very Jewish way, full of indecision. Eleanor’s supposed soul mate, Chidi Anagonye (William Jackson Harper), was an ethics professor before he died and can never settle on a flavor of frozen yogurt to eat, much less a concrete view of moral philosophy. After much debate, he agrees to teach Eleanor how to be a good person so she can pass into The Good Place without anyone noticing her tendency for selfishness.

Chidi explains that you can’t do good deeds simply because you want to get into The Good Place, you have to be selfless. It’s like he took it straight from the rabbis.

Besides the moral philosophy, the show has a zeal for breaking the rules of TV. It feels as if the writers had no evident plan and decided to turn the story upside down in every episode. Whereas traditional comedies opt for slow, drawn-out plots, “The Good Place” opts to reveal every secret and move the story forward at an electric pace. (Like “Lost,” except the ending here is actually satisfying.)

Without ruining the journey with spoilers, the philosophy of “The Good Place” only gets more Jewish as the show progresses, and settles — if precariously — on Jewish principles (for a spoiler-heavy description of the ending, read this essay on Alma). It’s a hilarious show that’s worth the wild ride.