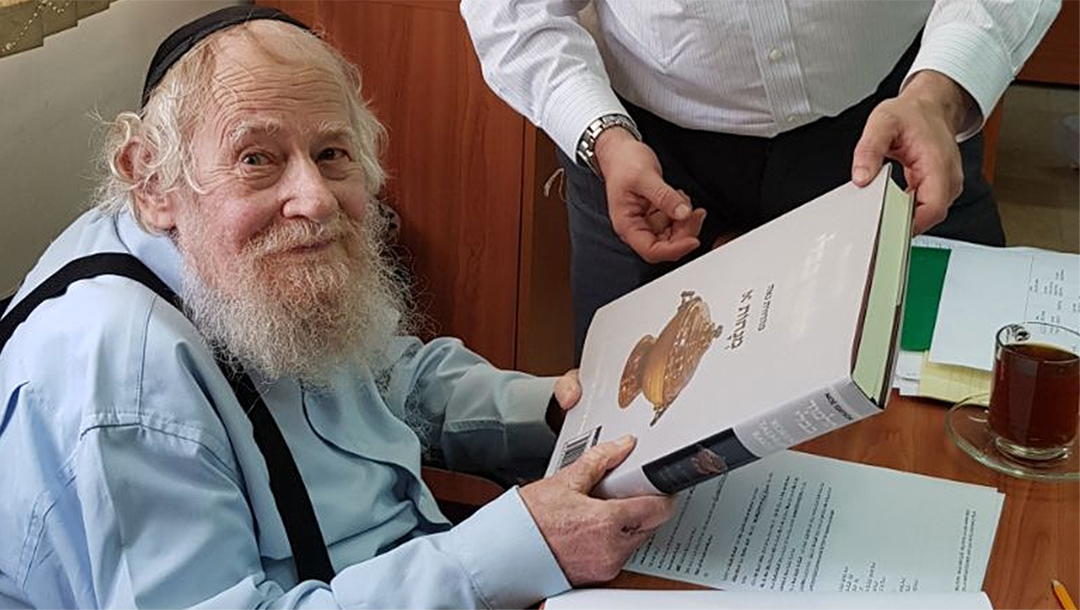 Rabbi Adin Even-Israel (Steinsaltz) inspects at his Jerusalem home an English-language translation of the Talmud based on his annotations on June 4, 2018. (Wikimedia Commons/SoInkleined)
Advertisement

(JTA) — Rabbi Adin Even-Israel Steinzaltz, the acclaimed scholar whose landmark translation of the Talmud enabled a vast readership to access one of Judaism’s most canonical texts, has died.

Steinsaltz died Friday at 83 in Jerusalem.

Steinsaltz’s monumental translation of the Babylonian Talmud made the arcane rabbinic debates and folkloric tales easier to comprehend, unlocking the wonders of Talmud study for those lacking a high-level Jewish education. The project took 45 years to complete.

Steinsaltz not only rendered the forbidding Aramaic text into modern Hebrew, but integrated his own commentary into the sparse language of the original, filling in gaps in the text that had previously required deep familiarity with the internal mechanics of talmudic discourse to decipher.

“The Talmud was never meant to be an elitist book,” said Arthur Kurzweil, the author of two books about Steinsaltz and a board member of the Aleph Society, which raises funds to support the rabbi’s work. “It was meant to be for everybody. So Rabbi Steinsaltz spent 45 years trying and succeeding to make that happen.”

Described as a once-in-a-millennium scholar, Steinsaltz was renowned for his prodigious intellect and tireless work ethic. He was reputed to put in 17-hour workdays.

Authoring a comprehensive commentary on the Talmud alone put him in a category alongside Rashi, the medieval French scholar whose commentary on the Bible and the Talmud, composed 1,000 years ago, is considered the most authoritative. But Steinsaltz also wrote another 60 books on topics ranging from Jewish ethics to theology to prayer to mysticism. He also helped establish educational institutions in Israel and the former Soviet Union.

Born to secular parents in Jerusalem in 1937, Steinsaltz embraced Jewish practice as a teenager. Though his father was an irreligious socialist, he sent his son to study Talmud with a tutor at the age of 10. Steinsaltz’s intellectual gifts were evident early, when he became the youngest school principal in Israel at 23.

In 1965, Steinsaltz founded the Israel Institute for Talmudic Publications, the same year he began his Talmud translation. His work was driven by a desire to educate large numbers of Jews about their heritage. “Let my people know,” was his favorite slogan.

“The Talmud is the central pillar of Jewish knowledge, important for the overall understanding of what is Jewish,” Steinsaltz told JTA in 2010 on the occasion of the completion of the translation. “But it is a book that Jews cannot understand. This is a dangerous situation, like a collective amnesia. I tried to make pathways through which people will be able to enter the Talmud without encountering impassable barriers. It’s something that will always be a challenge, but I tried to make it at least possible.”

The completion of the translation was accompanied by a global day of Jewish learning connecting 360 Jewish communities in 48 countries. The event has since become an annual affair.

Steinsaltz’s work was long deemed controversial. His Talmud departed from longstanding conventions, introducing punctuation and paragraph breaks, altering the pagination and placing his own commentary in the space around the main text that had previously been the domain of Rashi.

Rabbi Elazar Shach, a leading haredi Orthodox rabbi in Israel, called Steinsaltz a heretic and forbade his followers from reading his works, apparently out of concern for some passages in two works on the Bible that Steinsaltz subsequently agreed to modify. Shach insisted that all of Steinsaltz’s work was heretical, however, another eminent 20th-century authority, Rabbi Moshe Feinstein, approved of the Steinsaltz Talmud. In 1998, Jacob Neusner, a Conservative rabbi and noted scholar of Judaism, published a 250-page book entitled “How Adin Steinsaltz Misrepresents the Talmud.”

Steinsaltz was also criticized for accepting the leadership of a modern-day Sanhedrin, a recreation of the ancient rabbinic body. Steinsaltz resigned the post in 2008 out of concern for potential breaches of Jewish law.

But none of that slowed Steinsaltz’s embrace as an unparalleled scholar of Judaism, both in the Jewish world and beyond. He was awarded the Israel Prize, Israel’s highest cultural honor, in 1998, along with the inaugural Israeli Presidential Award of Distinction, the French Order of Arts and Literature, and a 2012 National Jewish Book Award. He was invited to deliver the prestigious Terry Lectures at Yale University and was a scholar in residence at the Woodrow Wilson Center in Washington. In 2016, he was invited to a private audience with the pope.

Among his best-known works beyond the Talmud translation is “The Thirteen Petalled Rose,” an introduction to Jewish mysticism first published in 1980. A follower of the Chabad Hasidic movement, Steinsaltz also authored several books on Tanya, one of the group’s core texts. In 2018, he published a translation and commentary on the Five Books of Moses.

Despite his massive intellectual achievements, Steinsaltz often appears slightly disheveled in public and had a playful streak. Kurzweil recalled an appearance at a Long Island yeshiva at which Steinsaltz encouraged the students to do everything they could to make their teachers’ lives miserable, and even suggested a source book where they could find difficult questions sure to flummox them.

“He’s a troublemaker and he’s got a gleam in his eye at all times,” said Kurzweil, who served as Steinsaltz’s driver during his visits to New York. “He’s up to mischief sometimes. He likes to question everything.”

Long plagued by ill health, Steinsaltz suffered a stroke in 2016 that left him unable to speak.

“Jewish learning is created by the Jews and is also creating the Jews,” Steinsaltz said in 2010. “When you learn, you learn about yourself. So learning one page of the Talmud is equivalent to two or three sessions with a psychoanalyst. That’s why people are interested — Jewish learning is a mirror into our soul.”

Get to know Rabbi Steinsaltz’s work and learn fresh insights into the Talmud, page by page. Sign up for A Daily Dose of Talmud here.