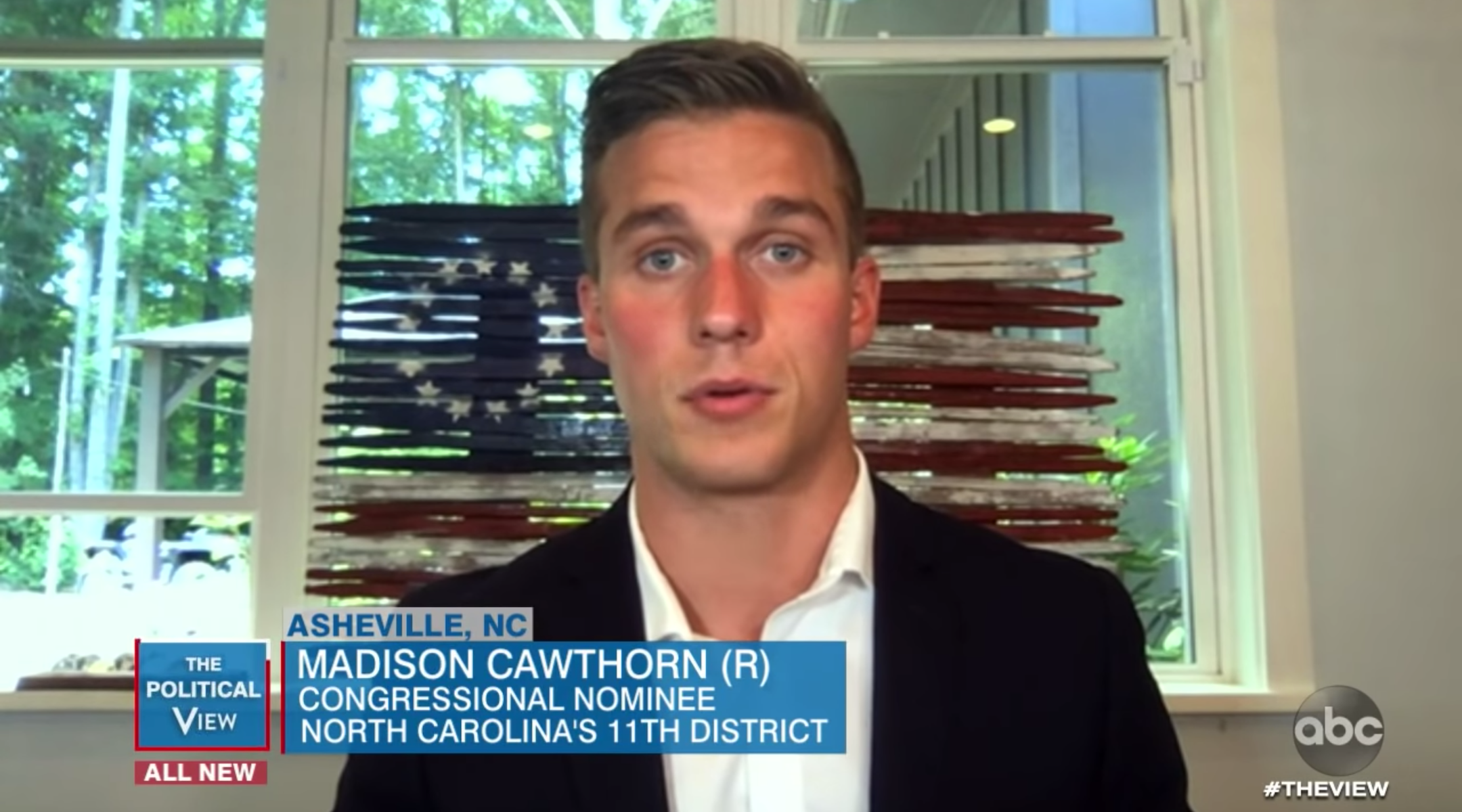 (JTA) — The Jewish mayor of Asheville, North Carolina, said it is “very concerning” that the Republican congressional candidate in her district visited Adolf Hitler’s vacation home and referred to him as “the Fuhrer.”

The candidate, Madison Cawthorn, is running to represent western North Carolina in Congress. In a 2017 Instagram post from the Eagle’s Nest, Hitler’s vacation home that was one of the last battlegrounds of World War II, Cawthorn referred to Hitler as “the Fuhrer” and said the spot was on his “bucket list,” in addition to calling Hitler a “supreme evil.”

Esther Manheimer, the Democratic mayor of Asheville, the 11th Congressional District’s largest city, said the post worried her. She was not alone among the district’s Jews, who said that the post, and the language Cawthorn used, raised alarm bells for them — though not all of them said they were sure the post indicated bigotry on Cawthorn’s part.

“It’s very concerning,” Manheimer told the Jewish Telegraphic Agency Wednesday. “Throughout the last several years, since Trump has been elected president, I think all of us have seen that white supremacists are emboldened and are publicly making their positions known, and to elect someone to office who openly throws out dog whistles like this, it just makes me really sad, actually, first and foremost. It makes me sad, disappointed, worried.”

Cawthorn briefly took down the photos after the website Jezebel called attention to them. But they were publicly visible again Wednesday, and Cawthorn tweeted that the criticism is “another fake news controversy.” In defense of the post, he tweeted a photo of grinning Allied soldiers who conquered the Eagle’s Nest in 1945. “They weren’t celebrating evil; they were celebrating their victory over evil,” he wrote.

Cawthorn, who has used a wheelchair since becoming paralyzed in a car accident in 2014, also criticized “my opponents and the disgusting members of the media who would try and affiliate a disabled man, like myself, with a movement that would have had me exterminated.”

The Jezebel article also noted that Cawthorn’s real estate business is called SPQR, an abbreviation from the Roman Empire, and that he has displayed the Betsy Ross flag, an early version of the American flag. Both have recently been adopted by far-right groups.

But an aide to Cawthorn vehemently denied in an interview that the candidate is a white supremacist or at all supportive of Hitler. Andrew Knapp, the campaign’s organizational director, who is Jewish, said that while Cawthorn may have erred in using the word “Fuhrer,” he is not prejudiced, and noted that Cawthorn wrote that Hitler is evil.

“Because there’s such a lack of truth to the accusations, it offends me to see it put out,” Knapp told JTA. “One of the great things about Madison is that he really is a person who looks at the person and not the race, religion, sexual orientation. He’s a religious Christian, so he’s got his beliefs, but he’s a friend to the Jewish community.”

Knapp said Cawthorn has not been in communication with the Jewish community in the district thus far because “it’s not a particularly large community.”

According to a 2010 communal population study, Western North Carolina has 3,000 to 4,000 Jews. Community members said that the area’s Jews, like American Jews as a whole, trend liberal. The largest concentration of Jews in the area is in Asheville, a relatively liberal city of nearly 100,000 in a district that has elected Republican congressmen in every election since 2011. There are three synagogues in Asheville.

Knapp sent JTA a position paper Cawthorn wrote on Israel that calls Israel an “ideal ally” and echoes standard pro-Israel positions that are de rigeur among Republicans. Cawthorn supports military aid to Israel, backs the move of the United States Embassy to Jerusalem and rejects the movement to boycott Israel, according to the paper.

Manheimer said Cawthorn’s reference to Hitler as the Fuhrer, which means “leader” and was Hitler’s German honorific when he was alive, gives her pause.

“What concerns me is his failure to recognize the gravity of his actions,” she said. “I think people can provide explanations, and it’s very difficult to understand whether they’re truthful when the actions happened.”

She added, “It’s quite an effort to go visit the place where Hitler vacationed. The combination of the reference of the Fuhrer and the incredible act of going all the way to this place from North Carolina to visit it, and saying that it was on your bucket list — even calling the statements Hitler made evil — it is not clear to me that this is someone that he is condemning. It looks a lot more like some level of admiration.”

Other Jewish leaders in the area said they were similarly concerned with Cawthorn’s language given the rise of anti-Semitism nationally in recent years. In December, a mural of pop star Tina Turner in Asheville was vandalized with a red spray-painted swastika.

“In a climate that we are in, where there has been a lot of hate speech and a lot of coding and subtle white nationalism, I think that Jews are naturally a little more sensitive,” said Rabbi Batsheva Meiri of Congregation Beth HaTephila, an Asheville Reform synagogue. “And I think it does behoove those who are running for office to be really careful about their messaging, because those kinds of actions and that kind of travel and all of those things are signals, and they don’t play well with Jewish hearts and minds, whether or not they were meant to.” 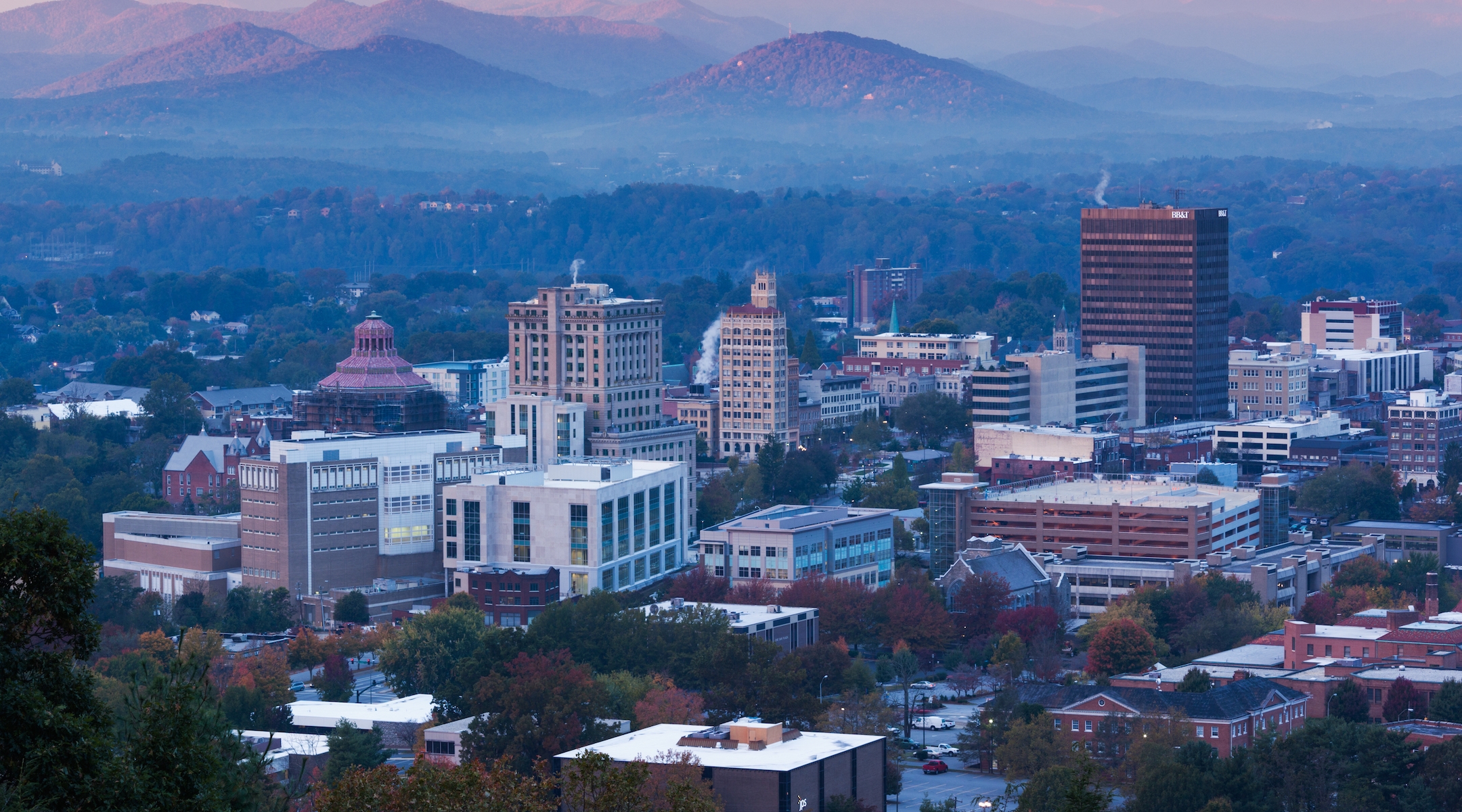 Justin Goldstein, a local Jewish teacher, said that while he disagrees with Cawthorn’s policies, he feels that the post and the other symbology do not necessarily indicate that Cawthorn is a white supremacist.

“My personal opinion is that this is a whole lot of nothing,” said Goldstein, a scholar in residence at Yesod Farm+Kitchen, a Jewish farm in the area.

“This is indicative of the state we’re in as a nation, which is the way we police each other’s language without getting into the meat of a different point of view,” said Goldstein, who until recently was the rabbi of Congregation Beth Israel, an egalitarian synagogue in Asheville. “He probably could have chosen his words better. It’s probably a good lesson for a 25-year-old congressional candidate that his choices matter, but it’s also a lesson for us, the left, to not read too much into language that may not actually be a dog whistle.”

Judy Leavitt, chair of the steering committee of Carolina Jews for Justice West, a progressive advocacy group, said she is “appalled” by the reports about Cawthorn, especially as she has felt that the area has seen some anti-Semitic activity.

“There is a base that will support that perspective,” she said. “As a Jew, it’s extremely worrisome.”