Taking a page from ‘Vagina Monologues,’ a new book explores taboos around women’s sexuality and gender in the Orthodox world

"Monologues from the Makom" is a collection of essays exploring female sexuality in the Orthodox world. (Illustration by Grace Yagel)
Advertisement

(JTA) — A religious woman struggles with discovering her attraction to women while being married to her husband.

Another grapples with being sexually assaulted by a fellow counselor at an Orthodox summer camp and why it took her two years to tell anyone about it.

The taboo surrounding menstruation means one young woman suffers debilitating cramps every month for a decade.

A fourth woman reflects on her decision to stop being shomer negiah, or observing the prohibition of touching members of the opposite sex, and the guilt that ensued.

These are some of the stories in “Monologues from the Makom,” a new book that explores the topics of women’s sexuality, gender and body image as they intersect with the lives of Orthodox Jewish women.

The euphemistic name of the book — a riff using Hebrew slang on the title of the feminist play “The Vagina Monologues” — is a nod to the quieter way that conversations about female sexuality have happened in Orthodox communities. Inside, dozens of stories, poems and musings — some anonymous — grapple with those conversations and their effects on women.

A three-year effort that grew out of an event by the same name by the Jewish Orthodox Feminist Association, known as JOFA, the book manages to be both niche — two stories detail the experiences of women immersing in the mikvah after menstruation — while also offering a broader cultural resonance in its narratives about sexual assault and how survivors are scared to speak out.

That’s precisely the point, says Rivka Cohen, one of the five editors of the book, which will be released in September.

“I want women, especially in the observant Jewish community, to read this book and see themselves in it and feel like they’re not alone and feel empowered and strengthened,” she said. “On the other side, I want people who are either outside of the community or men in the community to read it and gain insight into our lives and learn from it.”

The Jewish Telegraphic Agency spoke with Cohen and co-editor Rebecca Zimilover about why they took on this project, how the book resonates with their own experiences and what they hope people will take away from it. The conversation has been edited for length and clarity.

JTA: Tell me about the idea for the book and how you started working on these issues.

Cohen: “Monologues from the Makom” started off as an event series performance based on “The Vagina Monologues” where different women wrote their own monologues and performed them for all-women audiences. I attended the second installation of that series and I was completely blown away by all of the monologues. It was emotional, it was hilarious and all the pieces deeply resonated with me. I started working for JOFA soon thereafter and we started turning the project into the book in order to provide this space for a much larger audience and also give voice to those who maybe didn’t feel comfortable sharing in person. After some time it became an independent project.

What were your experiences with issues of sexuality and gender in your communities growing up?

Zimilover: I never had any sort of sex ed in school. My sex education was learning about family purity and the mikvah. It was all through the lens of marriage and how you need to help support your husband, and there was never any sort of actual understanding of the female body or what sexuality was outside of a marriage. People were doing things that were more sexually progressive than our teachers would have liked, but none of us knew what any of it meant. We were staring into an abyss and had no one to guide us. I went to a pretty mainstream Modern Orthodox school and it was just something that was never considered safe to touch. My mom assumed wrongly that I was getting the information at school and I wasn’t, and I graduated knowing basically nothing.

Cohen: Another huge part for me was being shomer negiah since I was 12. That has played a major role in my life and my trajectory and relationship to my sexuality, and I think that it caused a lot of harm because it’s very black and white. I used to think that if you’re not shomer, then that means you’re going off and doing whatever with whomever and I had no concept of what boundaries were except for not touching at all, which is not healthy and again ties into not having a clue about what consent is or means. My piece in the book is about the first time I broke shomer and a little bit about my thought process during that time.

Were you hesitant or nervous to share that story?

Cohen: A little bit. My parents have already read it and that was something that I had to get over. I was nervous about how others would react, but at the end of the day I feel like it was very important to get my story out there because I know that other people will relate to it. I also have other pieces in there that I did publish anonymously and I think those are just as important to share. There’s still a feeling of nervousness, of backlash within the community. There are some things that feel too intimate to have who-knows-how-many people reading this book knowing that they specifically happened to me. 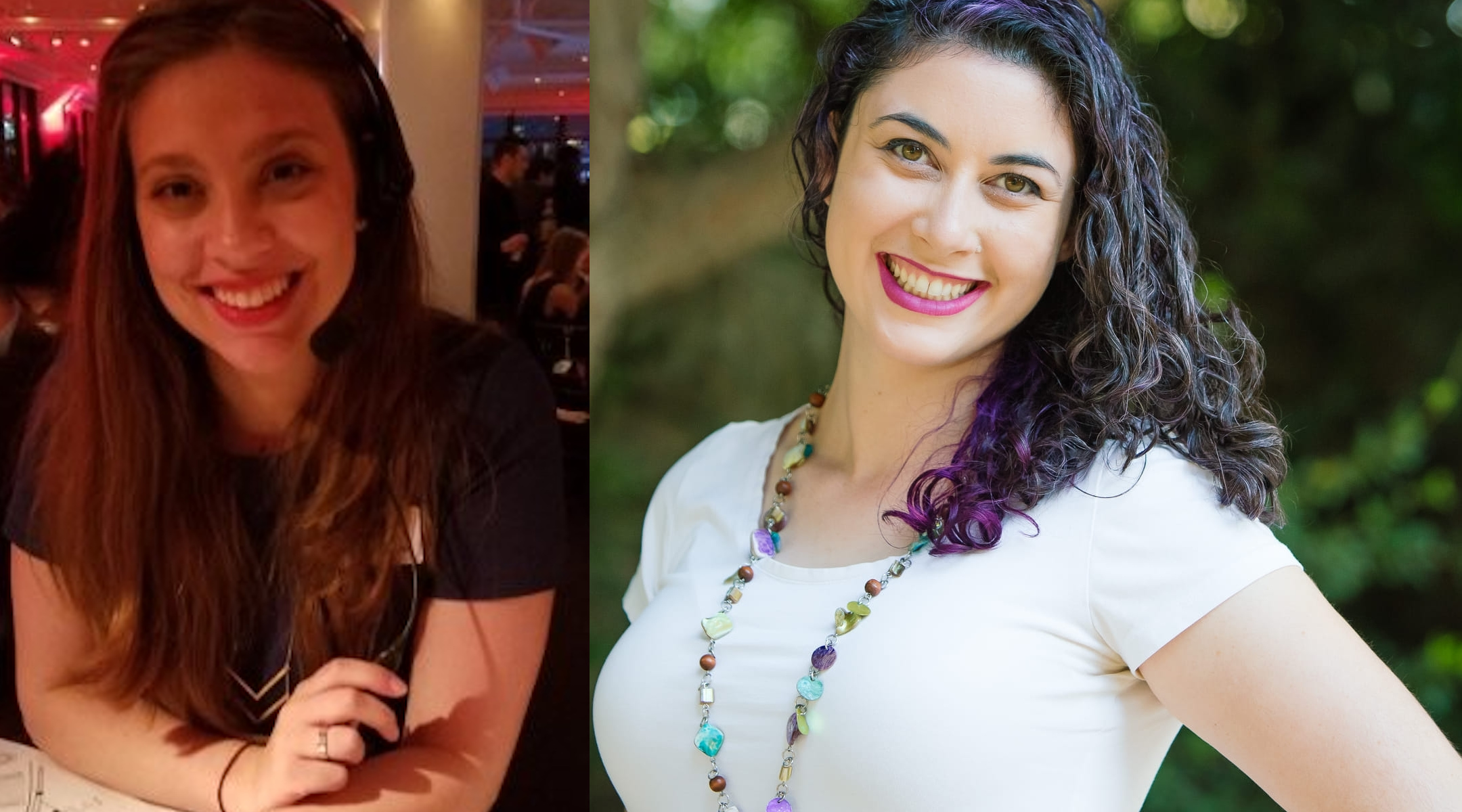 Rebecca Zimilover, left, and Rivka Cohen are two of the five editors of “Monologues from the Makom.” (Courtesy of Zimilover and Cohen)

Have you seen change in the Orthodox world in terms of openness to discussing these topics?

Zimilover: I think JOFA has actually done a really good job of opening those conversations. There’s been a parallel conversation at [Yeshiva University] around LGBT identity, and I don’t want to conflate this at all, but I will say that with the Y.U. students who have been speaking publicly about the LGBTQIA experience, there’s been a bigger conversation that started to happen around the broader gender identity sexuality conversation that happens in our neighborhoods.

Cohen: I think there is a general trajectory of more openness and liberalness in at least some streams of the Orthodox community, and there’s a long way to go on all of these issues, but I do see a heartening trend that hopefully this book can propel even more.

Zimilover: As you were saying that, I was also thinking about the fact that as some streams have started to open up the conversations, on the other side all of a sudden little girls’ faces can no longer appear in magazines, and they’re taking out women and they’re calling rebbetzins [by the] rabbis’ name and not even saying the woman’s name, and there has been this erasure of women entirely if you look towards the far right of the [Orthodox] spectrum.

Some of the stories in the book touch on issues of consent and sexual assault. That’s a conversation we’ve seen in the last few years in wider American society with the #MeToo movement. How do you think that wider conversation has affected the Orthodox world?

Cohen: It definitely is a movement that brought light in the Orthodox community as well, and the #MeToo movement was starting around the same time that things were really picking up with developing this book. That was something that we thought about when compiling the book and there are definitely pieces that speak to that. When the #MeToo movement started, we put out another round of calling for submissions for the book to make sure we got those stories and voices as part of the book.

What are you hoping that people will take away from this book?

Zimilover: When I first told my family about this, one of my family members said, “Are you afraid that the people who will pick up and read this book in the first place are the people that don’t need to read it?” I said, “That’s an interesting question, but I do think that even the people who you might think don’t need to read this book also need to read it.” But I also hope that someone from the other side of the aisle of this conversation picks it up and says, “This is disgusting and I want to make a noise about it” because I want the conversation to keep continuing. In my experience, when women start speaking out about something that they have gone through, sometimes people get angry and I think that’s needed right now.

Cohen: No. 1, I want women, especially in the observant Jewish community, to read this book and see themselves in it and feel like they’re not alone and feel empowered and strengthened. On the other side, I want people who are either outside of the community or men in the community to read it and gain insight into our lives and learn from it. Not just in the Jewish community — I remember in college talking about sex ed and being shocked at how little sex ed my peers got in their public schools. And definitely religious Christian friends of mine have very similar experiences of shame and guilt around these issues. I just think that the more we talk about it, the more we can get to a place of healing.