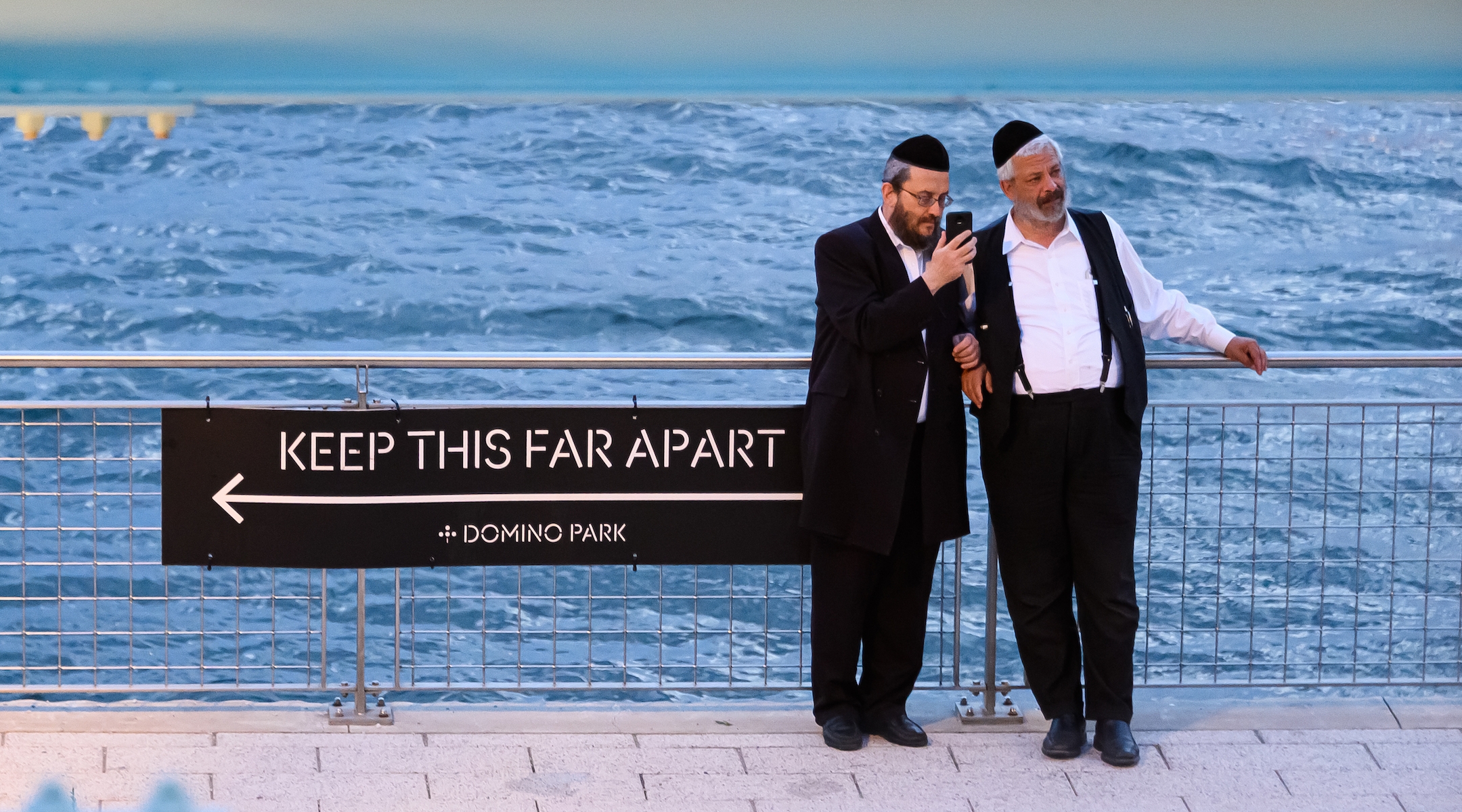 (JTA) – Over the past week, the reports have come fast and furious.

One overnight sports camp for boys in Pennsylvania had an outbreak of COVID-19, sending eight boys back to their home communities on Long Island and several more to Baltimore, where others had contracted the virus after attending weddings or coming into contact with those who did.

Bungalow colonies in the Catskill Mountains saw an outbreak among families, many of whom were summering there away from their homes in Brooklyn.

And New York City Mayor Bill de Blasio announced Wednesday that 16 new cases were found in the Brooklyn Hasidic neighborhood of Borough Park, with some traced back to a large wedding there.

As the summer comes to a close and families prepare for a new school year and the High Holidays, government officials and leaders in the Orthodox community are monitoring new cases in Orthodox communities across the New York City area and down the East Coast. They say the cases, though small in number at the moment, could spiral out of control, derailing plans to reopen schools with in-person instruction and hold in-person services for the holidays.

Left unchecked, the increasing cases also have the potential to turn next month’s gatherings in schools and synagogues into superspreader events, reversing the progress made over the past few months.

“It has the potential to be a perfect storm,” said Rabbi Dr. Aaron Glatt, the chief of infectious diseases and hospital epidemiologist at Mount Sinai South Nassau on Long Island and an assistant rabbi at the Young Israel of Woodmere, a large Orthodox synagogue in Long Island’s Nassau County. “The question everyone has to ask themselves is: Is not wearing a mask that critical that they’re willing to risk everything?”

Glatt said the New York City and Nassau County health departments have been in touch with him about a slight uptick in cases in several communities in the New York City area, including some related to wedding celebrations. He cautioned that a further rise could jeopardize schools, which are set to reopen in person for the first time since March, and in-person High Holiday services, which Orthodox Jews cannot replace with virtual services.

Doctors in Orthodox communities have pointed to a number of sources for the new cases. Vacationers are coming into contact with people from other communities and therefore risking exposure. Overnight camps, which were not allowed to open this year in New York state but were allowed in other states, including Pennsylvania, have seen some outbreaks as well, with the infected campers or staff members sometimes being sent back to their home communities to quarantine.

And while the pandemic seemed to put an end to the large weddings typical of Orthodox communities – guest lists of 400 people or more are not uncommon – the smaller outdoor weddings that have replaced them are still bringing together guests from different places, sometimes in large numbers, while mask wearing and social distancing are inconsistent. In some communities large weddings, whether indoors or outdoors, have resumed.

That has been the case especially in some Hasidic neighborhoods of Brooklyn, where life largely returned to normal as early as May and June as many in these communities, including some doctors, believed they had achieved a level of herd immunity — meaning a large enough percentage of the community had acquired immunity after recovering from the virus to significantly slow the transmission of disease.

As early as June and July, local health clinics serving Brooklyn’s Hasidic communities performing antibody tests for the coronavirus were seeing a much higher percentage of positive antibody tests there than in the city overall. 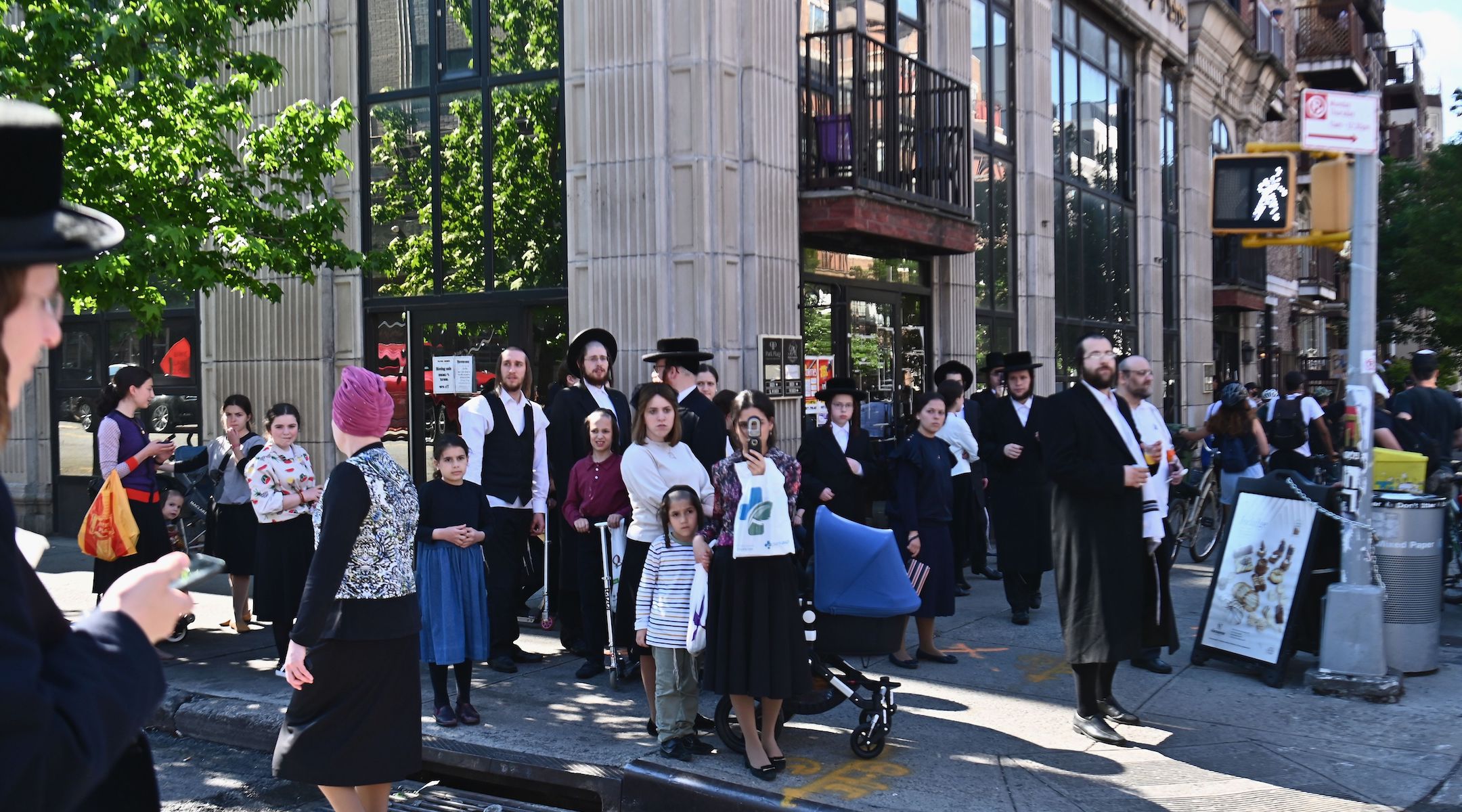 Orthodox Jews in Brooklyn watch a protest in the wake of George Floyd’s death, June 3, 2020. (Angela Weiss/AFP via Getty Images)

New data from the city released Tuesday seemed to support the claim that some Hasidic neighborhoods had higher levels of immunity than other parts of the city. According to those figures, 46.8% of people in one Zip code in Borough Park, the Brooklyn neighborhood with the largest Hasidic population, tested positive for coronavirus antibodies. The only other neighborhood with a higher rate of positive antibody test results was Corona, Queens, one of the hardest-hit parts of the city. Across Brooklyn as a whole, 27.9% of people tested positive for coronavirus antibodies, the second-highest rate among the five boroughs.

But even some level of herd immunity does not mean that there can be no cases.

“Herd immunity is a relative concept,” said Dr. Gary Slutkin, an epidemiologist who worked with the World Health Organization for over 10 years on AIDS programs in Africa.

While a large percentage of people having immunity to a virus can help reduce transmission in a group, he said, it does not bring the risk to zero for anyone who has not contracted COVID-19.

“Some of these 16 cases are linked to a recent wedding, a large wedding, in fact, in the community,” he said. “We are working quickly to galvanize community leaders.”

In response to a question about whether the new cases threaten the idea that there could be herd immunity in parts of New York City, de Blasio dismissed the theory.

“I don’t think we have any evidence of herd immunity anywhere in New York City,” he said.

On a blog used to disseminate information about local coronavirus numbers, doctors in Crown Heights, who as early as May were pointing to the results of a survey they disseminated showing that approximately 70% of the local Orthodox community had been infected with COVID, said they’ve seen cases “gradually increasing.”

They also noted the new case of someone who had not traveled, been in contact with any travelers or attended a large celebration, leading the doctors to surmise that the person became ill through “community spread” — meaning the virus is still spreading in Crown Heights despite the large numbers of people there who had recovered from the virus.

To what degree immunity to the virus can be relied upon remains unclear. While the CDC advised this week that there have been no confirmed cases of reinfection among those who initially contracted the disease in the previous three months, much remains unknown about immunity resulting from previous infection.

But among the new cases in Crown Heights, the local doctors said, were two cases of “presumed reinfection.”

“Both had antibodies but upon recent retesting had ‘lost’ their antibodies, and now, after being exposed to Covid, these people became sick again and tested positive,” the doctors, part of the Gedaliah Society, a group of medical professionals in the Chabad community of Crown Heights, wrote in a blog post Tuesday. “These two new cases are so clear in their course as to take reinfection from a probable phenomenon to a reality (albeit difficult to prove as we don’t have initial viral samples to compare).”

In a letter to the Nassau County Orthodox community, Glatt said there are cases of possible reinfection being assessed, but they appear to be rare.

“It still remains very reassuring, that with upwards of 20 million COVID-19 cases worldwide, there are very few proven reinfection cases,” Glatt wrote. “This is critically important for herd immunity, and partially explains why certain communities have very few new COVID-19 cases despite not adhering to masking guidelines.”

Rabbinical councils in several communities have put out community notices asking people to act with caution as the communities prepare for the reopening of local schools.

The Vaad HaRabonim of Cleveland, an Orthodox rabbinical group, sent a notice last week asking anyone returning from camps where campers or staff tested positive for coronavirus to quarantine for 14 days.

The Rabbinical Council of Bergen County, which was the first such group to shut down its large Modern Orthodox communities in Northern New Jersey back in March, sent a letter to the community Tuesday warning of the dangers of unchecked celebrations.

“While such an event, first and foremost, constitutes a threat to the health of those in attendance, the risk to the institutional health of our community created by such an event should not be minimized,” the group wrote. “Indeed, even one such event could easily result in the full closure of an entire yeshiva, or multiple yeshivot across our community.”

And the Vaad Harabanim of Baltimore sent a letter to the community last week asking people to act with greater caution at weddings.

“While in the shuls this vigilance is still evident, one area where laxity has sometimes set in is at weddings,” the Vaad wrote. “This is not only a threat to our continued health, but it Chas v’Shalom could set us back in our quest to be able to open the schools.”

Dr. Avi Rosenberg, an assistant professor of pathology at The Johns Hopkins School of Medicine in Baltimore who has become a go-to resource for Orthodox camps, synagogues and schools in Baltimore and across the country, said weddings were his biggest concern. (Rosenberg is involved in a study on the use of convalescent plasma to treat COVID patients that has recruited a large number of Orthodox plasma donors.)

“We have people who are clearly running unmitigated simchas,” said Rosenberg, using the Hebrew word for celebration.

He said he learned of approximately 25 new cases of COVID in the Orthodox community in Baltimore last week, most of which were connected to weddings in Brooklyn or Lakewood, New Jersey, home to large Orthodox communities. Weekly cases had remained in the single digits from May until last week, he said.

“People really need to understand that this upsurge in simcha-related community spread is what’s putting the success of school reopenings at risk,” Rosenberg said. “If it continues at the rate it’s currently going in, I don’t know how we’re going to open schools safely.”