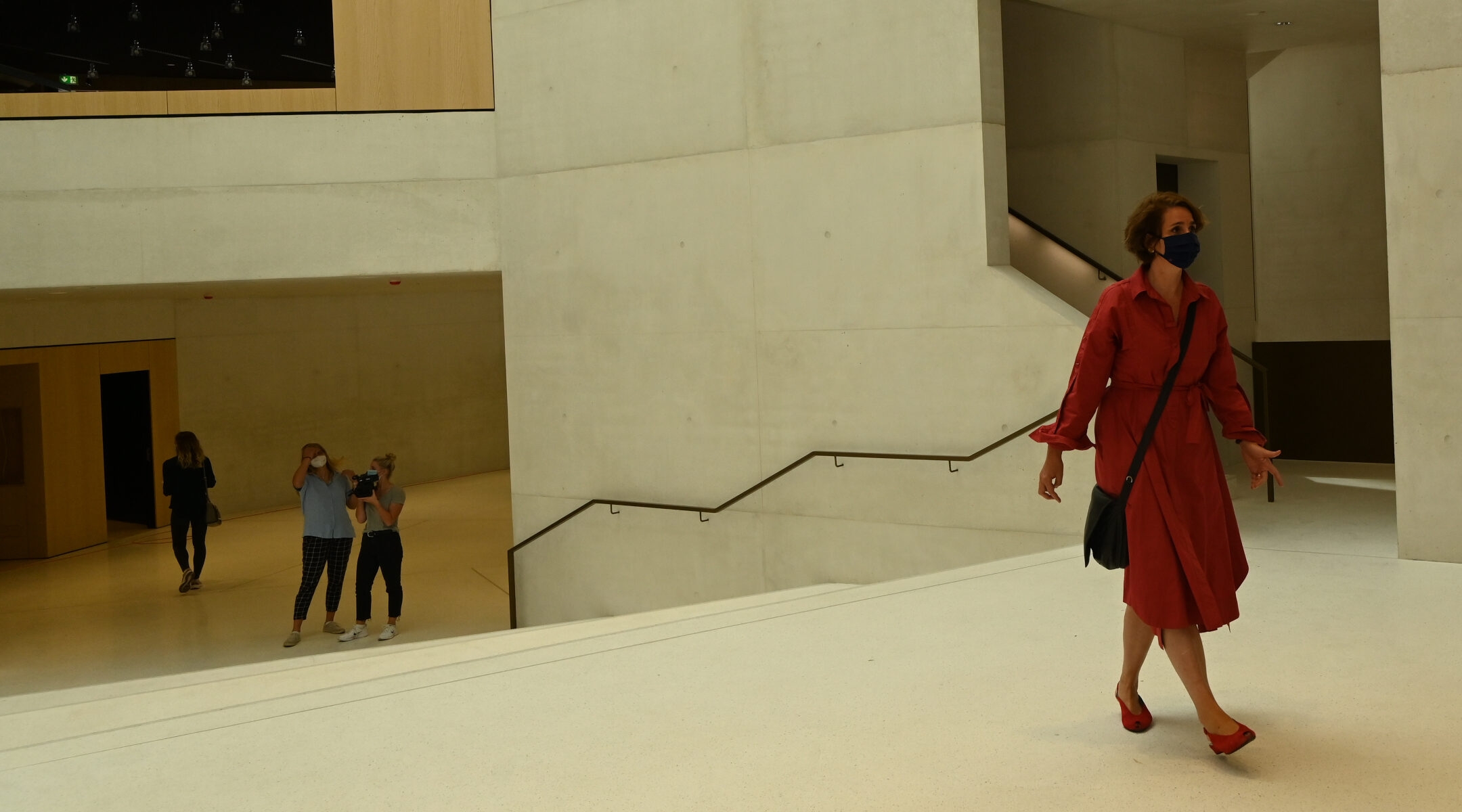 Mirjam Wenzel is the director of the new Jewish Museum of Frankfurt, Aug. 25, 2020. (Cnaan Liphshiz)
Advertisement

FRANKFURT, Germany (JTA) — Although she was born in this city, Anne Frank is mainly associated with Amsterdam, where she hid during the Holocaust and wrote her famous diaries.

Now the Jewish Museum Frankfurt is preparing to showcase the Frank family’s deep attachment to the city they left in 1933 as part of a $58 million expansion scheduled to open to the public on Oct 21.

The Frank Family Center will be a key element within the museum’s new permanent exhibition, featuring family artifacts that have never been publicly exhibited, including silverware, porcelain and artworks that surviving family members in Basel, Switzerland, kept throughout World War II.

“In a way, they kept the family heritage alive,” Mirjam Wenzel, the museum director, told the Jewish Telegraphic Agency at a media event on Tuesday. “They tried to keep alive certain traditions from when they lived here, and owned a huge house and a private bank.”

Wenzel said she was particularly moved by how well cared for the silverware was.

The Franks were among thousands of German Jews who fled their native country as the Nazis rose to power. Like the Franks, many were ultimately killed as the Nazis swept through much of Western Europe.

Highlighting the Franks’ connection to Frankfurt certainly makes sense from a marketing perspective. Anne, who was murdered as a teenager along with her mother and sister after the family hiding place was discovered in 1944, is probably the world’s best-known Holocaust victim. Her diary, published in 1947, was edited by her father, Otto, the only member of the immediate family to survive the war. It became a best-seller, translated into dozens of languages and adapted numerous times for films, operas and musicals.

But according to Wenzel, the artifacts in the Frank center tell an important and often overlooked part of the story — not just of Anne Frank, but of German Jewry. To her, the items illustrate all that the Franks lost because of the Holocaust.

One such item is a 19th-century porcelain set with an inscription commemorating the wedding of Anne’s great-grandmother, Cornelia Stern. Cornelia’s daughter, Alice Stern, fled Frankfurt for Switzerland in 1933, where she kept many family heirlooms until her death in 1953.

The Jewish Museum Frankfurt initially opened in 1988. The expansion, funded largely by the city, includes a renovation of its original Rothschild Palais building and the construction of a new facility featuring dramatic asymmetric architecture with multiple rhombus-shaped windows. The new space will have more than 21,000 square feet of exhibition space capable of welcoming thousands of visitors daily and an advanced website that incorporates virtual viewing technology developed at some of Europe’s leading museums.

Wenzel said the new building will function as “an educational center for the promotion of democratic ideas and of tolerance.”

Sara Soussan, the museum’s curator of contemporary Jewish cultures, said the Frank center will be the only place in Germany with its own exhibit on the family, and that she hopes it will “shine a light” on an oft-forgotten part of the Anne Frank story.

The reopening is the first of multiple events that will celebrate 1,700 years of Jewish life in Germany. The events are funded by the government and coordinated by an association called 321-2021.

The celebration comes amid one of the most challenging times for German Jewry since World War II, with rising levels of Muslim and far-right anti-Semitism. Last year, a far-right gunman tried to break into a synagogue in Halle on Yom Kippur and wound up killing two people nearby after failing to gain entry to the building. In recent years, multiple cases of anti-Semitic violence by people of Muslim background have also been documented in Germany.

“I’m very ambivalent about the question of celebration,” Wenzel said. “I feel it’s a time of insecurities in which, on the one hand, there are Jewish voices, especially young ones, that are more self confident, outstanding, demanding their place, rediscovering the traditions that had been cut. And there is a majority, probably, in the community that is insecure as to where this might lead, and that brings up fears and memories.”