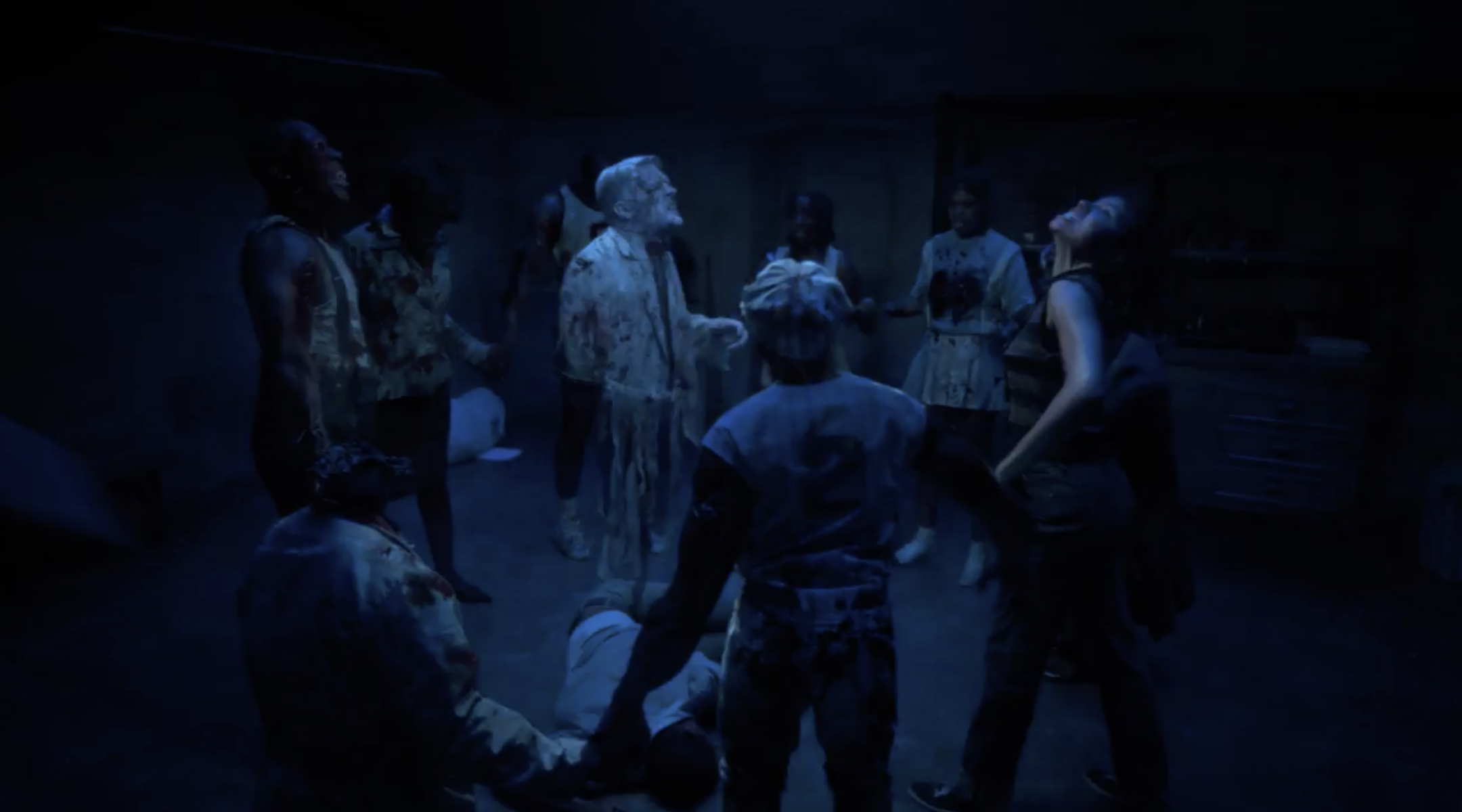 Hiram Epstein, center, is a character who appears as a ghost in the third episode of "Lovecraft Country." (Screen shot)
Advertisement

This story contains spoilers about the third episode of “Lovecraft Country.”

(JTA) — Like more than 1 million Americans in each of the last three weeks, I’ve been appreciating “Lovecraft Country,” the new HBO series that adds monsters and other fantasy elements to the real-life horror stories faced by Black Americans.

The show’s main characters are all Black, and the white characters are either members of a secret society or racist sheriffs and cross-burning neighbors.

So I was surprised Sunday night to hear a typically Jewish last name applied to a character whose only appearance was as a ghost — and whose story instantly evoked one of history’s most durable anti-Semitic stereotypes.

Hiram Epstein, the episode reveals, was a University of Chicago scientist who conducted gruesome experiments on Black children and adults in the basement of the Winthrop House, a decrepit mansion in a white neighborhood that a main character, Leti Lewis, purchases and renovates. His spirit haunts the home, making it unsafe for Leti and her tenants and friends, until an exorcism summons the mutilated bodies of his victims and restores psychic order.

Epstein’s story calls to mind the way that Jews have been accused for centuries of stealing the blood of non-Jewish children to use in religious rituals, often to make matzah for Passover, in what is known as a “blood libel.” The blood libel charge was leveled routinely at Jews beginning in the Middle Ages, and it was used to justify countless deadly pogroms and vigilante actions. A blood libel charge tore apart an upstate New York town in 1928, and the trope featured prominently in Nazi propaganda.

Could “Lovecraft Country,” which deals so elegantly with the Black American experience, really have a blood libel embedded in its plot? On Twitter, I found a single reaction to Hiram Epstein’s name — one that matched my own.

Beyond that, the normally voluble world of must-see-TV chatter was silent on Epstein’s name and possible Jewishness. Reviews and summaries of the episode published on Sunday night and Monday morning omitted the topic, as did the official podcast featuring a writer from the show that was released right after the episode aired, even as the hosts discussed the “creepy scientist” and the history of medical experimentation on Black bodies.

Scholars who study anti-Semitism had more to say. The plot point “falls right into the category of a new version of the blood libel,” Elissa Bemporad, a scholar of Jewish history at Queens College who recently published a book about blood libels in the Soviet Union, told me. “The name Epstein gives it away. This clearly builds on the blood libel trope and narrative — the question of children as victims of the alleged crime, and the fact that the perpetrator is a man. Anti-Semitism, like racism, is so often gendered.”

The Epstein name isn’t present in the original novel on which the series is based, “Lovecraft Country” by Matt Ruff. There, the ghost that haunts the house Leti buys is named Hiram Winthrop — explaining the mansion’s name — and he isn’t a doctor. (He also isn’t nearly as scary.) The series adds a more recent owner who colluded with local police to facilitate abductions and experimentation.

Why make him have a Jewish last name?

“I have significant questions about why they made that choice, because both historically and narratively it seems like a bad one,” said Jennifer Caplan, a professor of religious studies at Towson University who studies Jews in popular culture and is familiar with both the book and the series. “They could have made [the more recent owner] a Winthrop descendant just as easily. It seems weird.”

Misha Green, the showrunner, and Jurnee Smollett, the Jewish actress who plays Leti, did not respond to requests for comment, nor did Ruff. HBO did not explain why the name Epstein was chosen but said in a statement that the choice was not meant to conjure one of the oldest anti-Semitic canards.

“While the fictional world of the series draws from history and mythology in many instances, this character’s name was neither conceived nor intended as a reference to the trope cited,” the network said.

But intention is only part of the picture when assessing stereotypes in popular culture, according to Aryeh Tuchman, the associate director of the Anti-Defamation League’s Center on Extremism.

“I don’t want to say you can never have a villain in a movie or TV show have a stereotypically Jewish name,” Tuchman said. “But you need to educate yourself. When you’re dealing with a topic that is so fraught as allegations of ritual murder, then to know that these allegations have been leveled against Jews for thousands of years is something you need to pay attention to.”

Caplan said she wouldn’t be surprised if no one on the set, even the Jews involved in the production, knew about blood libel. (The show’s producers include Jordan Peele and J.J. Abrams, who is Jewish.) She said she teaches about the trope in her introduction to Judaism class every year, and the idea is new even to most of her Jewish students.

But even an inadvertent invocation can have an effect, Caplan said.

“Although most people aren’t going to pick up on it, the ones who will are the ones we don’t want to be perpetuating these stereotypes,” she said. “Anti-Semites certainly know the narratives … I don’t think the alt-right, KKK crowd is going to watch the show, but people don’t need to watch something to get a sound bite.”

The people I spoke to offered various theories for why the name Epstein might have been chosen. One suggested that the show’s creators might have been alluding to the fact that H.P. Lovecraft, the early-20th-century horror writer whose oeuvre inspired the book and show, was virulently anti-Semitic, in addition to racist. (About Hitler, he wrote in the early 1930s, “I know he’s a clown but god I like the boy!”)

Another possibility could be that the name was in the ether as filming took place last summer and fall. That was exactly the time when Jeffrey Epstein, the financier and convicted sex offender, was charged with sex-trafficking minors and died in a New York City jail.

“I wonder if that influenced the otherwise inexplicable though no less troubling change of the name,” said Magda Teter, a professor of history and Judaic studies at Fordham University whose book “Blood Libel: On the Trail of an Antisemitic Myth” was released in January.

But Caplan said that would hardly be a good reason to make the name change. “You just have to be more thoughtful than the zeitgeist,” she said. “You have to be aware of how things can be taken and misconstrued.”

“Lovecraft Country” wouldn’t be alone in stumbling into anti-Semitic tropes. “Never Have I Ever,” a dramedy that came out this spring, included a diverse cast but drew criticism for poking fun at the single Jewish character in ways that reflected anti-Semitic stereotypes. Meanwhile, a British Jewish group last month criticized another popular show, “Umbrella Academy,” for featuring a race of powerful lizard people, the centerpiece of a widespread anti-Semitic conspiracy theory, and showing an evil overlord speaking Yiddish.

Aaron Lipman, the Vermont computer programmer who was the only person to question the name change on Twitter Sunday night, told me he had not found merit in the “Umbrella Academy” critique. The “Lovecraft Country” plot point, on the other hand, he said, “made me jump a little in my head” when he saw it unfold.

Lipman wondered how, in a room of some of Hollywood’s sharpest and most politically aware writers, producers and actors, the anti-Semitic undertones of the Epstein renaming slipped by.

“For a show which is so on the money in addressing American racism,” he added, “a character who to me feels like a giant red flag with regard to blood libel perhaps indicates how easily anti-Semitism can blend in with society to the point where it’s easy to miss.”