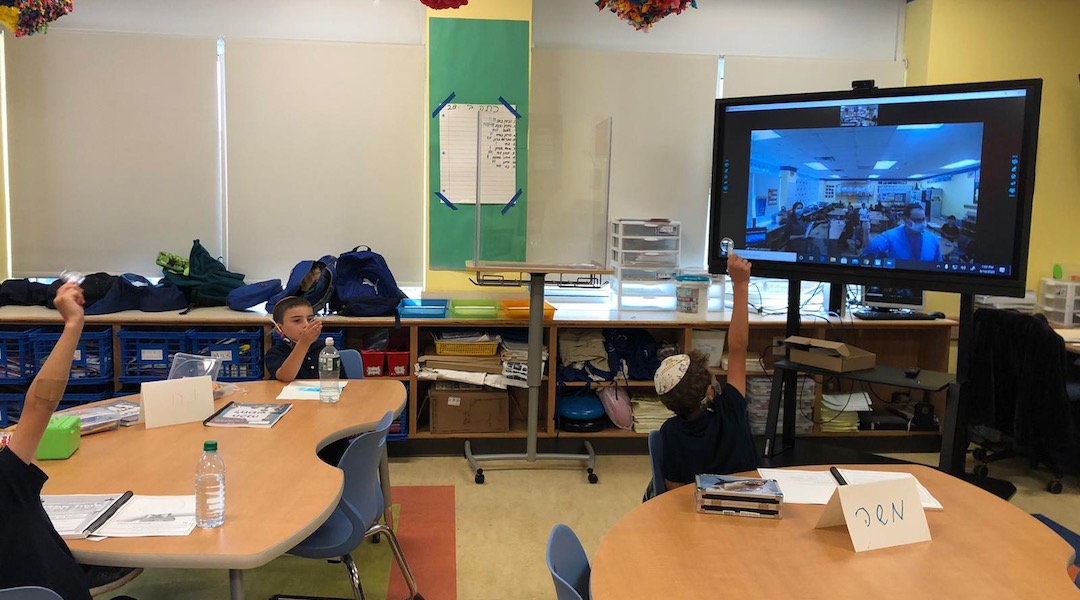 A rabbi at the Hebrew Academy of Long Beach teaches two cohorts in separate rooms using a Smartboard. (Courtesy of Richard Altabe)
Advertisement

Now they’re back in the classroom.

That experience of opening, closing and reopening is likely to be the new normal for dozens of Jewish day schools across the country as schools reopen for in-person instruction this fall.

“That’s what makes this period even tougher than the spring,” said Paul Bernstein, CEO of Prizmah, a network for Jewish day schools. “Today I’m in person, tomorrow I may be virtual. There are just so many unknowns that make this year challenging.”

Many Jewish day schools are at an advantage over public schools when it comes to returning to in-person learning. With smaller student bodies, larger budgets and often a more affluent parent population, many of the Jewish schools have been able to create reopening plans while public schools remain closed or on hybrid schedules.

But even with the millions of dollars being invested in Plexiglas dividers, personal protective equipment and upgraded ventilation systems, there are no guarantees that the resumption of in-person instruction will last all year, let alone a whole week.

“No one knows what tomorrow’s going to bring,” said Stephanie Ives, head of school at Beit Rabban, an elementary school on Manhattan’s Upper West Side. “But we are very grateful to be open in person now.”

For the Charles E. Smith Jewish Day School in Rockville, Maryland, school began virtually for nearly all students on Sept. 1. While private schools in Maryland are allowed to determine their own reopening guidelines, the school made the decision to begin remotely with the hope that a transition to hybrid learning, with students returning to in-person instruction in shifts, might be possible as the year progresses.

Space is the main reason for the hybrid model.

“We don’t have enough room on campus to observe 6 feet of distance” at full capacity, said Rabbi Mitchel Malkus, head of school.

For Beit Rabban, the need for extra space to accommodate safe in-person instruction led the school to rent more space from a local synagogue. And that’s after the pandemic pushed down the school’s enrollment.

Even with the extra space, the continuation of in-person instruction remains uncertain. In New Jersey’s suburban Bergen County, outside New York City, several schools have already had to quarantine certain classes due to positive COVID cases or exposure among students. And there was the Zell school’s experience in the Chicago suburbs.

In parts of New York City that have lately seen a sharp increase in the percentage of COVID tests returning a positive result, the circumstances in which they’re reopening are particularly tenuous.

According to Dr. Stuart Ditchek, a pediatrician in Midwood, one of the Brooklyn Orthodox neighborhoods that has seen a recent uptick in COVID cases, four schools have already had to quarantine individual classrooms after students in the classes tested positive.

At the Hebrew Academy of Long Beach in Nassau County, in New York’s Long Island, students in fifth through 12th grade were required to be tested for COVID before returning to school. Students at the school come from parts of Queens and Nassau County, where there has been a rise in cases, with several connected to large weddings.

“It takes a community’s cooperation,” said Richard Altabe, principal of the Hebrew Academy’s lower school, who said the school spent more than $500,000 on protective measures, including personal protective equipment and Plexiglas barriers. “If the parents do what they’re supposed to do and we do what we’re supposed to do, it works.”

Dr. Hylton Lightman, a pediatrician in Far Rockaway, a neighborhood in Queens with a higher COVID positivity rate in recent weeks, said he administered over 500 tests in the last week, mostly for students returning to school.

“It’s very important that schools should open and people should go about it with the right behavior,” said Lightman, noting that testing should be part of that approach.

For many parents, sending kids back to school is a relief, even in communities where the virus is less controlled.

While cases are rising in Orthodox communities in Queens, where he lives, Rubin said his concern “is not that the schools will be the source of spreading the virus” but “with the adults.”

For many schools, the financial cost of preparing for the new year was extensive. According to a survey conducted by Prizmah, the average Jewish day school spent a total of $173,031 on COVID-related expenses, including the protective equipment, cleaning supplies and building modifications. One school surveyed spent $909,000 on COVID-related expenses.

In New York, UJA-Federation announced a $2.1 million fund to help schools cover the cost of reopening in person after a group of day school leaders in the city, convened by Beit Rabban’s Ives, put out a public call for community support. Chavie Kahn, director of school strategy and policy at UJA-Federation, called the reopening costs “unprecedented.”

“It’s health and safety protocol, it’s building modifications, it’s technology,” Kahn said. “These were all significant in terms of cost.”

Despite the extra costs involved in reopening, there’s also a financial incentive to open in person. Malkus said some families that chose to leave his suburban Washington, D.C., school because of the possibility of a full year of remote learning. At the same time, other families joined the school, seeing it as a better remote option than their local public schools.

“If their children are going to be in distance learning, they would rather they be with us,” Malkus said.

In addition to the personal protective equipment needed for faculty and staff, many schools installed dividers in front of teachers’ desks or around each student desk. Many schools also upgraded HVAC systems to ensure healthy filtering and airflow. And for some schools, money went toward technology with the understanding that the schools could be forced to return to remote learning.

At Beit Rabban in Manhattan, classrooms were outfitted with smart TVs and iPads on tripods to stream classes to students participating from home and teachers spent time over the summer completing professional development to improve online teaching. They’re even spending time training students for online learning in case they have to return to remote learning again.

Prizmah’s Bernstein agreed that being able to begin the year in-person is key, even if schools are later forced to close. 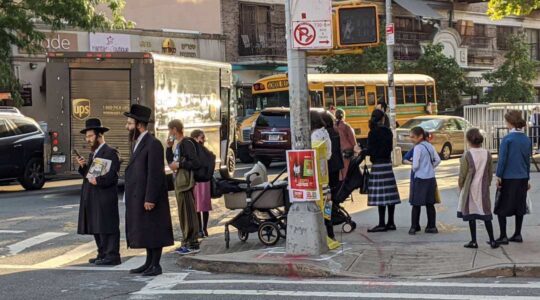