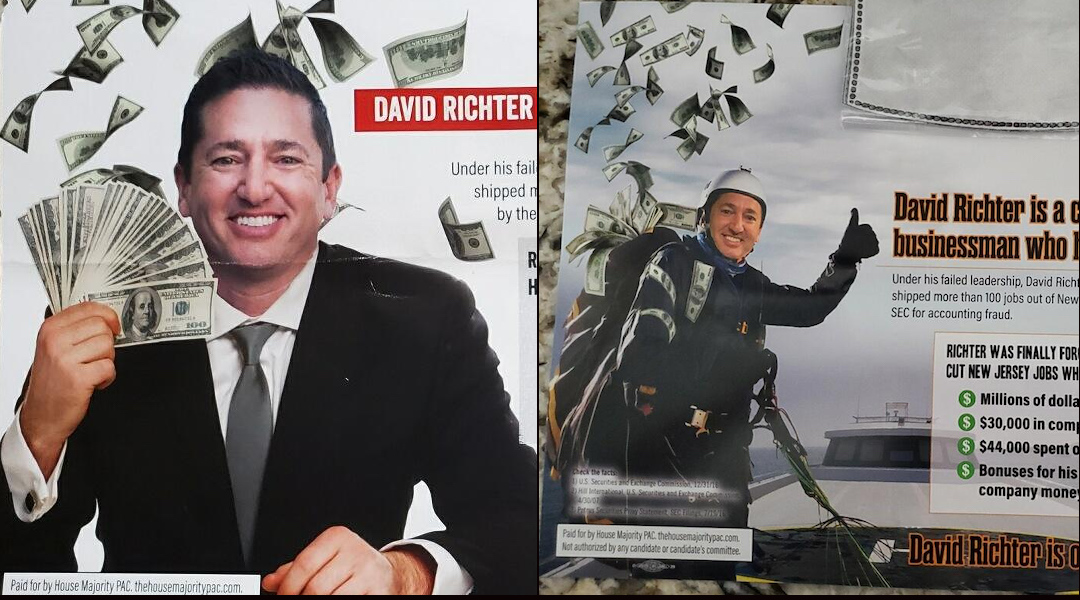 (JTA) — A Democratic Super PAC aligned with House Speaker Nancy Pelosi has sent out three mailers to voters in a New Jersey congressional district that depict the Republican candidate, who is Jewish, clutching money.

One mailer shows the candidate, David Richter, holding a fistful of fanned-out $100 bills, with more raining down behind him, while the reverse shows his suit jacket lined with bills. Another, showing him holding $100 bills in the shape of a rose, says he “puts personal profits over New Jersey families and it is truly obscene.” A third shows him with $100 bills flying out of his backpack, and carries another image of him using a $100 bill as a parachute.

Richter, the former CEO of a construction management company, is running to unseat the incumbent Democrat, Rep. Andy Kim, in New Jersey’s 3rd District, in the center of the state.

The ads were sent by the House Majority PAC, a super PAC closely associated with House Speaker Nancy Pelosi. An official with the PAC confirmed its authenticity to the New Jersey Globe, a political news site, and said the reference was to Richter’s business history.

Richter said that the ads were anti-Semitic and called on Pelosi to apologize.

“Every single mailer that she’s sent attacking me has piles of cash either raining down on my head, shooting out of my backpack, lining my jacket pocket — every single mailer,” Richter told the Jewish Telegraphic Agency. “It’s outrageous. It really is. I felt that these were very anti-Semitic.”

Brad Komar, the super PAC’s independent expenditure director, said in a statement that the images referred to Richter’s record at his construction management company, not to his religion.

“The mail pieces have nothing to do with David Richter’s religion, and everything to do with the fact he ran a company into the ground,” Komar’s statement said. “Perhaps David Richter would like to tell us what imagery he thinks is more appropriate to describe his corruption, mismanagement and fraud.”

A string of mailers this year and in 2018 were similarly criticized for depicting mostly Democratic Jewish candidates clutching money or, in some cases, with artificially elongated noses.