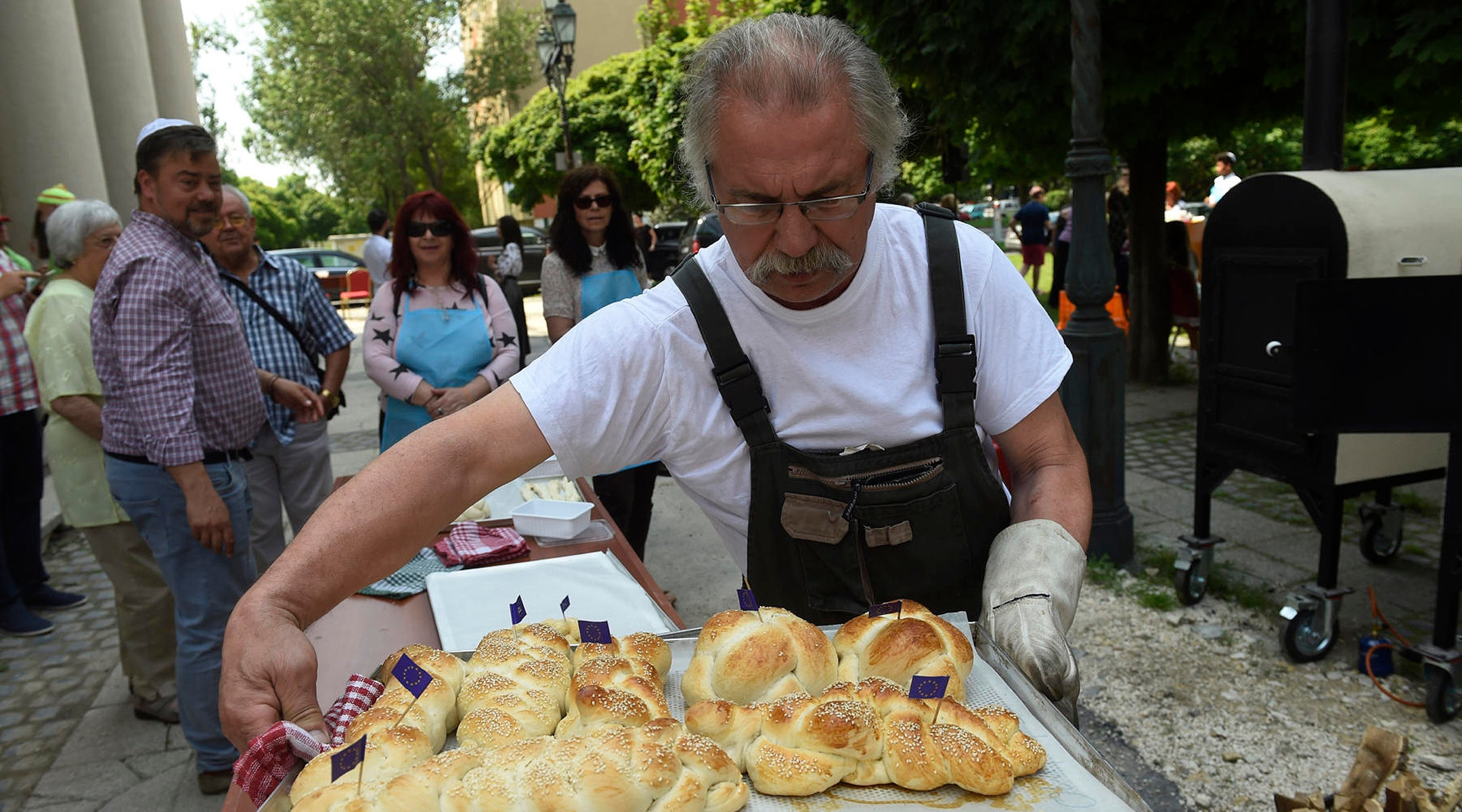 Hungarian Jews bake challah in front of the Obuda Synagogue in Budapest in 2018. (Zsolt Demecs/Courtesy of EMIH)
Advertisement

(JTA) – When Rosh Hashanah begins on Friday night, none of Hungary’s 100,000 Jews will be in a synagogue. Instead, they’ll be on a boat in the Danube, under tents and atop the deck of a floating hotel — locations chosen to allow open-air prayer during the coronavirus pandemic.

Hungary and many other European countries are seeing a surge in coronavirus infections, and their governments are tightening emergency measures meant to stop the disease’s spread at exactly the time when Jews are set to celebrate the High Holidays.

The Hungarian government banned all worship activities in churches, synagogues and mosques last week as the country started registering about 1,000 new COVID-19 cases a day.

On Wednesday, construction workers and volunteers began setting up some 20 open-air locations across the capital, Budapest. The giant tent was erected Thursday outside the Obuda Synagogue, a 200-year-old French Empire-style building that is among the country’s largest Jewish houses of worship. It will accommodate a few hundred people for a group prayer and kiddush on Friday.

“We have decided to proceed with all the holiday celebrations as planned while taking all the necessary health and safety precautions to protect our community,” the synagogue’s rabbi and head of the EMIH federation of Jewish communities, Shlomo Koves, told the Jewish Telegraphic Agency. Koves also is a prominent emissary of the Chabad-Lubavitch Orthodox movement.

The tent will have a smaller capacity than the synagogue, which hosts about 700 people on Rosh Hashanah, “but then again we expect fewer people to come to synagogue this year because many people are afraid to get infected,” Koves said.

The same dynamic is playing out in other European countries.

In France, dozens of schools were shuttered last week as the country registered 10,000 new infections in a single day — the most since the pandemic began in January. Prime Minister Jean Castex reportedly is warning that a second lockdown may be inevitable there.

Synagogues in France that are usually packed with hundreds of worshippers have been forced to drastically reduce their capacities. Reform ones, like the Keren-Or Synagogue in Villeurbanne near Toulouse, for the first time has set up a streaming channel for its Rosh Hashanah services, which otherwise would be limited to only the 50 people who are allowed in the room, the synagogue’s rabbi, Daniel Touati, told a French TV station.

This solution is not an option for Orthodox synagogues, which will not stream services because doing so would be a violation of halacha, Jewish law.

Rabbi Shmulik Glitzenstein of the Zsilip congregation in downtown Budapest made use of his synagogue’s riverside location: He rented the deck of a floating hotel on the Danube for the eve of Rosh Hashanah to hold prayers in the open air.

Worshippers will have their temperatures checked at the entrance to the events, the synagogue association to which both Zsilip and Obuda belong said in a statement. Where light meals will be served, they will be consumed standing and in keeping with distancing protocol.

Koves said shofar-blowing ceremonies are being organized in each of Budapest’s 23 districts at open-air and accessible locations.

“This time,” he said, “we will celebrate the holiday in a rather special way and will wish each other that the New Year sees the end to the coronavirus pandemic.”