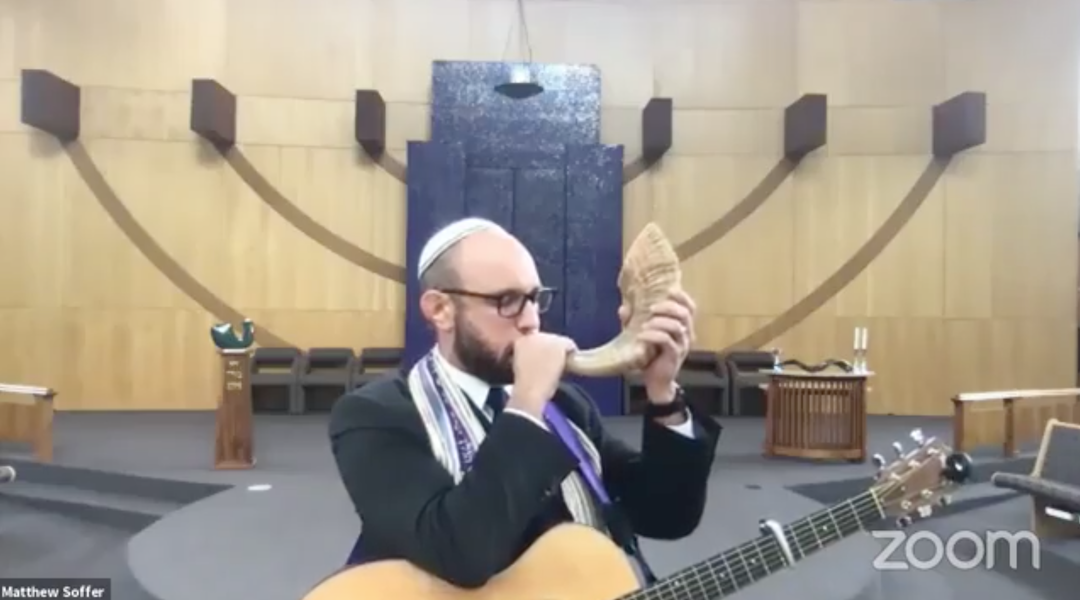 (JTA) — Rabbi Matt Soffer was leaving his synagogue on Friday evening after leading Rosh Hashanah services alone for a congregation following along online when the text came from his wife: Ruth Bader Ginsburg had died.

“The news brought me to my knees and I wept,” Soffer said.

Then the messages started coming — from his family, his friends, his congregants at Judea Reform Congregation in Durham, North Carolina — all mourning the Jewish Supreme Court justice who had come to represent the liberal American feminist spirit for so many.

By the time Soffer signed on for services on Saturday morning, he had resolved to address Ginsburg’s death with his community. He did so by revising not the words he had prepared or the prayers he would lead, but by tweaking a core tradition of the High Holidays: the shofar blasts.

Just as the Supreme Court has nine members, one of the shofar blasts, teruah, has nine short notes. Soffer halted after just eight to symbolize the fact that the court has just lost a member who made it complete and, he said, “to honor the speechlessness of our communal grief.”

In some parts of the country, many synagogues had already launched their Rosh Hashanah services on Zoom and many families had already sat down for a holiday meal when the alert came. On Twitter, Rabbi Michael Latz reported that a colleague had “rushed the bimah” with a note scrawled on a piece of paper ripped from a spiral notebook: “RBG died.”

“I wept and shared the news,” Latz wrote. “And then called us all to bless RBG’s memory by being a force for justice and equality and human dignity.”

Further west, the news came in the final moments of 5780.

“I’ve never been so thankful to be on Pacific time before,” tweeted Rabbi Sara Zober, who leads a congregation in Reno, Nevada. “I had a few hours to cry before having to steel myself for services.”

But no matter where congregations are physically located, how to incorporate the news represented an exigent question at a time when months of planning finally seemed to be coming to a close. Rabbis and synagogues had upended every tradition to revamp their services for the pandemic, either by putting them online in non-Orthodox communities or holding small-scale, socially distanced services in Orthodox ones. Changes on the fly would not be easy.

Many clergy members determined that Ginsburg’s status required them anyway. In New York City, Angela Buchdahl, the senior rabbi of Central Synagogue, offered a tribute and then sang Psalm 150 to the tune of Leonard Cohen’s “Hallelujah” over a photo montage of Ginsburg’s life. In New Jersey, Rabbi Marc Katz of Temple Ner Tamid in Bloomfield replaced the prerecorded haftarah with a recitation of some of Ginsburg’s words set to the notes of a Torah reading. In Washington, D.C., Michigan and elsewhere, Ginsburg was the topic of conversation from the bimah.

But others chose not to alter their plans.

Maharat Ruth Balinsky Friedman, who works at Ohev Sholom-The National Synagogue in Washington, D.C., learned about Ginsburg’s death from a congregant on Saturday morning. (The Orthodox synagogue held in-person services and members largely do not use technology on holidays, meaning that they would not have seen the news online.)

Friedman said she and the synagogue’s other rabbi decided not to adjust the service, which had been shortened to exclude sermons because of the pandemic, in part because she understood the political and practical considerations of her community.

“I think it would be too tricky to deal with in shul and I knew some people would be hearing it for the first time,” she said.

Soffer said he knew that his congregants had all heard the news and would want to process it as a community. That’s what prompted his truncated shofar blasts.

“I can’t speak for other congregations, but mine is one that regards Justice Ginsburg as an unparalleled tzaddik of our time,” Soffer said, using the term for righteous person. “Our congregants took comfort in our ritual recognition of her passing, and now we know what we have to do in the year 5781 — make her memory a blessing through our righteous deeds.”