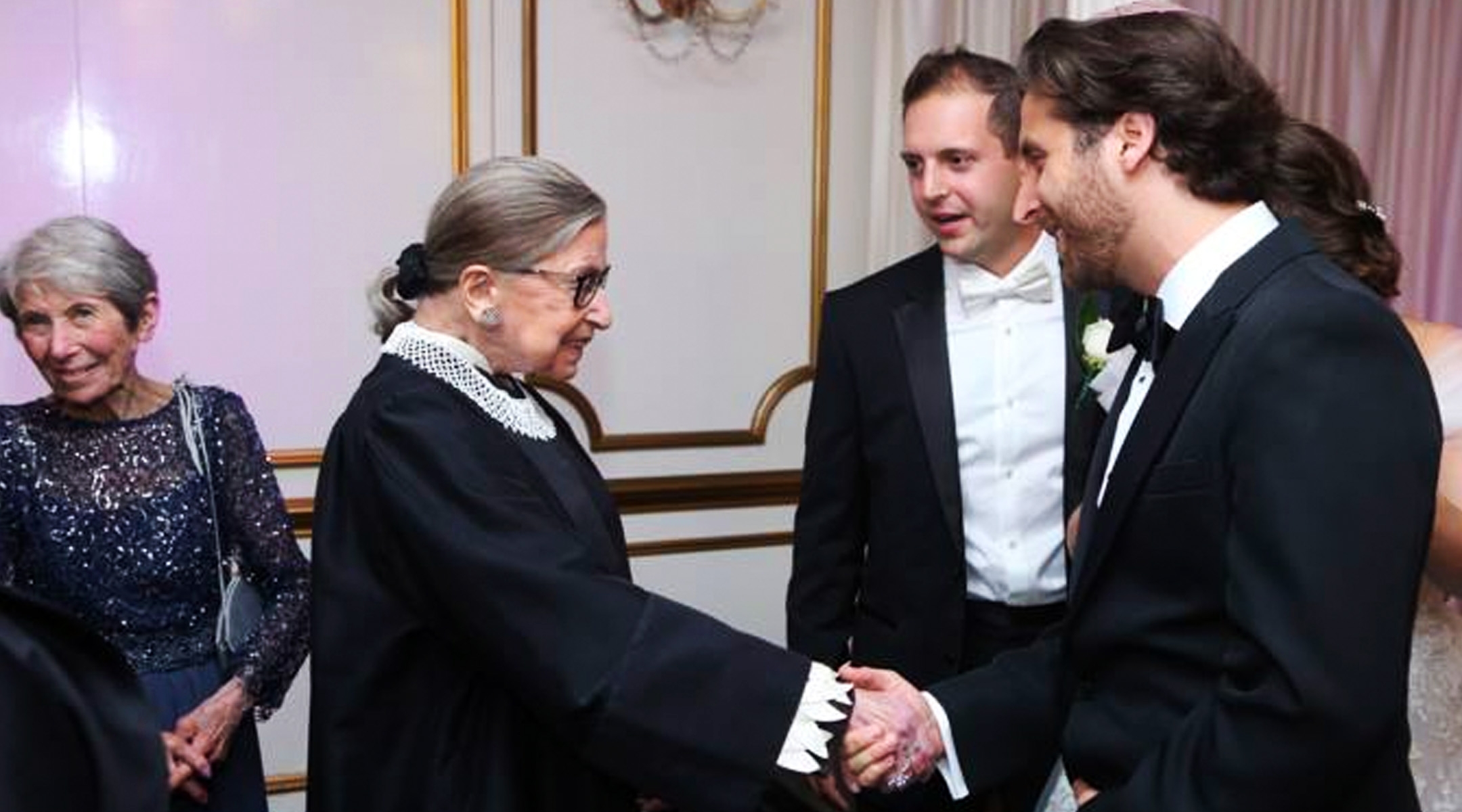 (JTA) — There was an audible gasp as she entered the room. Flanked by bodyguards, with her white gloves prominent, Ruth Bader Ginsburg took a seat next to the bride and groom as cameras clicked rapidly.

I had never co-officiated a marriage ceremony before, let alone with a Supreme Court justice.

Jewish tradition prescribes blessings for all kinds of momentous occasions, including upon seeing a sage of secular renown. I introduced this blessing with trepidation, for when else would I have the opportunity to recite it?

“Blessed are you, Hashem, our God, Sovereign of the universe, who has apportioned God’s knowledge to human beings,” I said. The believer and the atheist all seemed to affirm a loud amen.

What made this gathering all the more personal was that the bride was my first cousin, my best friend from childhood. Her husband-to-be’s grandmother just so happened to be first cousins with “Kiki,” as the family referred to the justice. And so, the wedding was a family affair.

I remember receiving mail from the country’s highest court and relishing each correspondence from my new “pen pal.” I wrote back and forth to the justice, as she shared examples of other ceremonies she had performed in the past and we prepared for my cousin’s traditional Orthodox ceremony.

When we stood together under the chuppah and I blessed the justice with as many more years serving on the bench as she would like, the hall erupted in applause.

That was September 2016, when most presumed Hillary Clinton would be the next U.S. president. Ginsburg smiled when she said the “power vested in me by the U.S. Constitution,” as applause erupted, and concluded by saying, “I now pronounce you wife and husband,” again with a bit of a smirk.

As I reflect on that most memorable time in light of the justice’s passing, there was a painful irony hovering over that ceremony.

While Justice Ginsburg occupied a seat on the country’s highest court, how might she be honored in an Orthodox synagogue, when in most circumstances she would have been forbidden to receive an aliyah on the basis of her sex?

While she was able to co-officiate the wedding itself, Justice Ginsburg would not have been allowed to serve as a witness for the marriage contract because of her gender: It’s a rabbinic legal document and women cannot serve as witnesses, according to Orthodox interpretations of Jewish law.

On matters such as these, we traditionalists must acknowledge that it is not merely “kavod habriyot” — honoring the dignity of every human being — that’s at stake here but also “kavod haTorah” — the dignity and honor of the Torah itself. Does anyone really want to argue that Justice Ruth Bader Ginsburg would not be a most perfectly suitable candidate for the function of serving as a witness?

Certainly the Orthodox world has made tremendous strides in advancing and activating women’s roles. And today, the women Orthodox rabbis ordained by Yeshivot Maharat, Harel and Yashrut can and do usher in new responsa regarding these issues.

But the ordination of women is still far from the norm in the Orthodox world — and it is incumbent upon all of us, especially men with privilege and rabbis like myself, to serve as their allies.

Our country is in a period of suffering. Jewish law describes the mourner experiencing this state while waiting to bury a loved one — a state of spiritual and emotional suffering.

But suffering can give rise to growth. Honoring Ruth Bader Ginsburg’s legacy means pushing for justice, fairness and equality in our communities. I will carry this charge with me as I fulfill roles that the Orthodox world does not yet allow women to play.