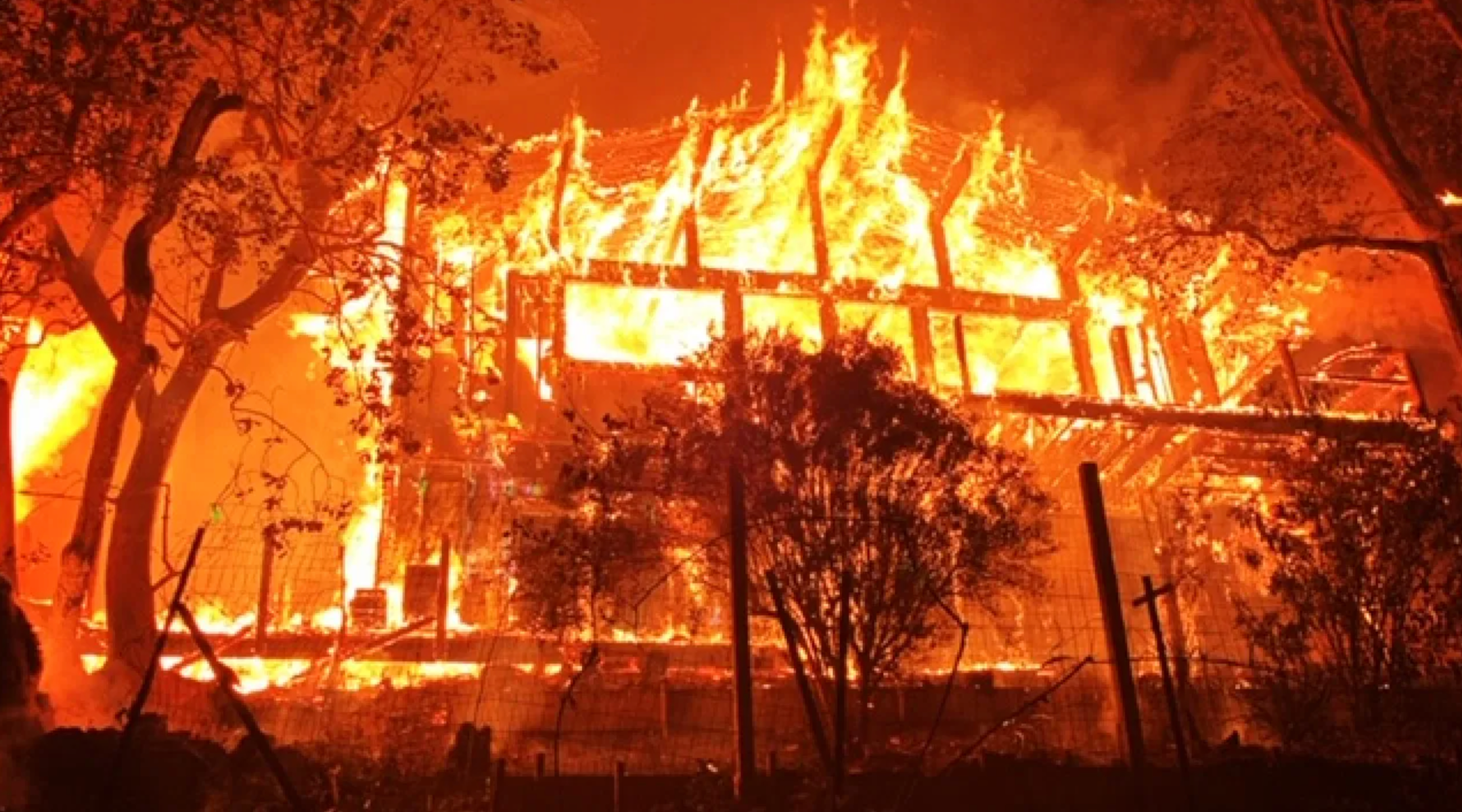 (J. the Jewish News of Northern California via JTA) — Rabbi Stephanie Kramer and her family were at home when they got the call to evacuate as Kol Nidre was ending on Sunday evening.

“A very loud alert went off on all our phones,” said Kramer, senior associate rabbi of Congregation Shomrei Torah in Santa Rosa, California, which had prerecorded the opening Yom Kippur service.

Kramer said Rabbi George Gittleman and cantorial soloist Erica Wisner also had to evacuate, along with a number of the Reform synagogue’s congregants, because of the wildfires raging in Northern California.

“Many of those people are just unsure of their home status right now,” she said.

The Glass Fire had consumed more than 45,000 acres by Tuesday evening and was threatening restaurants and wineries in Napa County, The New York Times reported.

Some 80,000 residents have been ordered to evacuate from affected areas.

Kramer’s family jumped in the car and headed for the freeway. They had plenty of company: The road was so packed, she said, it took 45 minutes to go a half mile. As of Tuesday, they were sheltering with friends in Petaluma, about 15 miles away.

It’s a sadly familiar experience for Kramer and her congregation.

In 2017, a week after Yom Kippur, the Tubbs Fire started its assault on Santa Rosa, eventually killing 22, destroying 5,600 structures and wiping out the Reform movement’s Camp Newman. Shomrei Torah became a hub for Jewish community aid, serving as a shelter, soup kitchen and command center for volunteers eager to help the community.

Now the Glass Fire is hitting many neighborhoods that weren’t affected by Tubbs.

Kramer is keeping in touch with her congregants, but she isn’t expecting an end to the situation soon.

“Nothing is contained right now,” she said. “I know from experience, from 2017, that this is the calm before the storm.”

The Glass Fire began Sunday as a small fire before quickly ballooning to threaten over 10,000 structures, according to Cal Fire. Eighty homes had been destroyed in Napa and Sonoma counties.

In the eastern part of Santa Rosa, the mandatory evacuation line stopped right across the street from the Sonoma County Chabad Jewish Center, according to Rabbi Mendel Wolvovsky.

In spite of being so close to the evacuation zone, the rabbi said he didn’t expect to have to leave himself. Instead, Wolvovsky was concentrating on providing food and shelter for the displaced while keeping an eye on fire news.

“The ash keeps raining and the smoke is still thick,” he told J. on Tuesday afternoon.

With the Glass Fire threatening east Santa Rosa near Congregation Beth Ami, nearly all the congregants and staff were evacuated as a precaution. Among them is Rabbi Mordecai Miller, who conducted Yom Kippur services via Zoom at his daughter’s Los Altos home.

“It looks like everyone is evacuated,” Miller said. “There are a few who remained in the warning zone; they will wait until it’s mandatory evacuation.”

Miller said he has spent much of his time since the start of the Glass Fire making check-in calls to congregants. The synagogue itself is fine, though it has been essentially shut down since the onset of the coronavirus pandemic.

Beth Ami, like all other North Bay Jewish institutions, has become accustomed to coping with wildfire emergencies. Several congregants lost homes in the Tubbs Fire.

Congregation Ner Shalom in Cotati, about halfway between Petaluma and Santa Rosa, had not yet been directly threatened by the Glass Fire as of Tuesday afternoon. But Reb Irwin Keller, its spiritual leader, said some of his congregants live in the fire zone and have been forced to evacuate.

Some did so in the middle of Yom Kippur services.

“One of the unexpected benefits of holding High Holidays on Zoom is that people who were evacuating continued to be [supported] in ways they wouldn’t otherwise,” Keller said. “If this was any other year, they would have had to abandon Yom Kippur. Instead they moved, went to a safe place and came back to the Zoom room.”

Keller said he had urged congregants enduring the stress of evacuation to forgo fasting on the Day of Atonement.

“It felt to me that we needed all our wits about us,” he said. “Nobody needed to get an evacuation order while not physically ready.”

This makes four years straight that Keller and his fellow Sonoma County residents have had to cope with catastrophic wildfires. He says by now everyone has a plan on what to do when fire threatens. However, the coronavirus has thrown some of the playbook out the window.

When the Tubbs Fire devastated the same region, Keller recalled, “We had 40 people that first night sheltering in the synagogue. Now you can’t have 40 people in the synagogue. And at the same time the countywide preparedness is so much better. I don’t think we’ll be overwhelmed because people have had years to make their contingency plans.”

Even counties outside the danger zones were affected.

In Marin County, Marc Dollinger was all set to host the fifth outdoor service of the High Holiday season on Monday in his San Rafael backyard. The professor of Jewish studies at San Francisco State University, with his wife, Marci, had used the space to host The Kitchen’s Rosh Hashanah eve service, both days of Rosh Hashanah and Kol Nidre.

But when Dollinger, one of the co-founders of the indie congregation in San Francisco, stepped outside on Yom Kippur morning, he knew he’d have to change plans.

“As people were driving here, I walked outside and smelled smoke,” he said in a phone call Tuesday. Smoke had wafted into the county from nearby wildfires, creating unhealthy air conditions.

So Dollinger improvised in a season that has required more improvisation than any before. He invited the leaders and hosts of the service — including Kitchen rabbis Noa Kushner and Jessica Kate Meyer — into his living room, where the Yom Kippur service went on, broadcast to more than 400 households via livestream.

Each participant from The Kitchen had been tested for coronavirus prior to the service. The team moved furniture out of the sunny, hardwood-floored living space, replacing it with instruments, sound equipment and a Torah ark.

“We are living the liturgy” this year, he added. “Who shall live and who shall die.”

The Dollingers had hosted services in their living room before, as Rodef Sholom’s “Shabbat Unplugged” used to bring up to 50 people to “sing Hebrew songs until late,” Dollinger said.

He said Kushner and Meyer captured the “searingness” and the intensity of the moment.

“For me it was my most spiritual, meaningful Yom Kippur ever,” Dollinger said, something he attributed to the unprecedented circumstances and to “what The Kitchen delivered.”