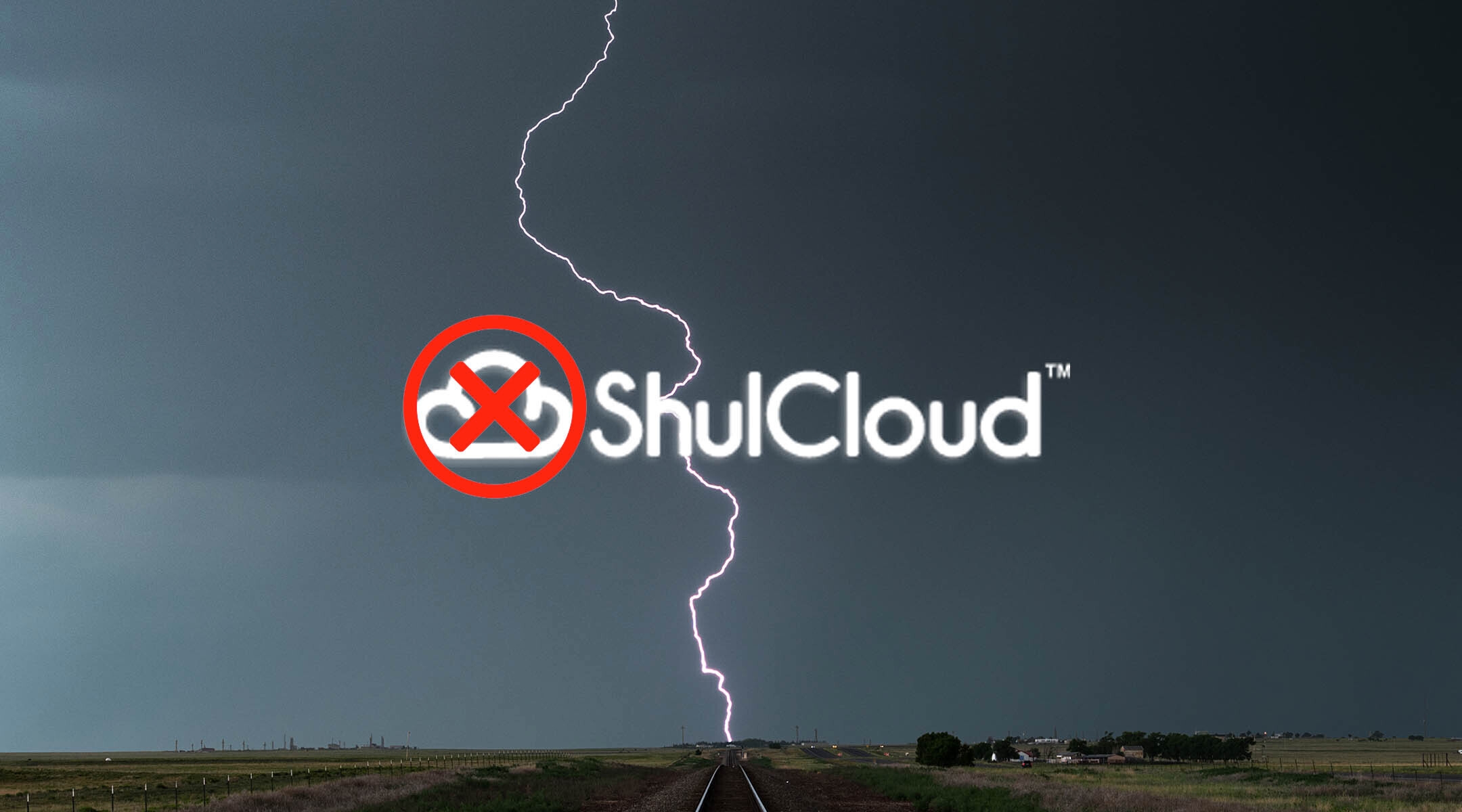 (JTA) — Minutes before Rabbi Howard Jaffe was due to start streaming Yom Kippur services to his Reform congregation in suburban Boston on Sunday evening, he received an urgent phone call from the synagogue’s associate rabbi. The synagogue website, which housed links that synagogue members would use to access the stream of Kol Nidre services, was down.

Turns out, they weren’t the only ones.

As untold numbers of Jews braced for an unprecedented Yom Kippur celebrated largely online, synagogues across the country whose websites are hosted by the web services company Shul Cloud found their sites were inoperable Sunday night. The discovery came just as countless congregants were preparing to tune in to what is normally one of the most well-attended synagogue services of the year.

Jaffe scrambled to inform members of Temple Isaiah of workarounds to access the stream. But the synagogue’s email service is powered by Shul Cloud, too, and he was unable to quickly fire off an email with direct links to the stream. So Jaffe put out the word on the synagogue’s Facebook page. He estimates that 100 to 150 members were affected by the shutdown, and he’s not sure how many of them eventually managed to access the service.

“It was terribly disheartening, it was disappointing,” Jaffee told the Jewish Telegraphic Agency. “And I took a deep breath and said to my rabbinic colleagues with whom I work, ‘There is nothing we can do about it. All we can do is what we can do.’”

Shul Cloud declined to specify how many synagogues were affected by the outage this week. But synagogue staffers from across the country vented their anger at the company in a Facebook group, with many accusing the company of dropping the ball on the most important night of the year and declining to communicate anything of substance to synagogue administrators scrambling for last-minute workarounds.

In an email to users the Monday prior to Rosh Hashanah, the company announced it was taking steps to shore up its systems in anticipation of increased activity, including adding servers and enabling real-time monitoring to watch for disruptions in service.

After several synagogues reported slow response times over Rosh Hashanah, the company sent another email saying it had faced a scenario “that could not be anticipated or used to test our preparedness.” The company promised still further enhancements for Yom Kippur, including a doubling of its capacity and the launch of a status page on its website to report known outages.

But it wasn’t enough to keep the Shul Cloud-powered website of Barnert Temple in Franklin Lakes, New Jersey, from going down on Sunday night. Fortunately, the Reform synagogue had implemented an extensive contingency plan, including contracting with other providers in case the platform failed, and was able to quickly pivot.

Adat Ari El, a Conservative synagogue in Southern California’s San Fernando Valley, wasn’t so lucky. The synagogue also had a backup system it activated after its website went down just hours before Yom Kippur, but that didn’t help with the synagogue’s fundraising appeal powered by Shul Cloud.

Executive Director Eric Nicastro told JTA that long load times on the site meant the synagogue, already facing a half-million-dollar budget deficit due to the coronavirus, only raised $10,000 over the holiday. A follow-up email to congregants on Tuesday explaining the situation yielded about another $30,000. In a typical year, the synagogue brings in about $100,000 in Yom Kippur donations, Nicastro said.

“For us, the appeal, which always raises good money, was vital,” Nicastro said. “And so even though we had the backups, the ineptitude of Shul Cloud made it impossible for people to donate.”

Shul Cloud is the dominant player in a highly niche market, providing a range of back-end tech services to about 1,200 synagogues around the world, including web hosting and design, content management, membership, billing, fundraising, scheduling and more.

In 1993, the company merged with a competitor to form Shulware, the umbrella company for Shul Cloud and two other software platforms, Congregation Connect and Chaverware, aimed at synagogues. The entire platform is now under the aegis of Togetherwork, a family of businesses that provide administrative software solutions.

In an interview Wednesday with JTA, Togetherwork CEO Neil Platt acknowledged that the company had made mistakes in its planning, attributing it to the unprecedented nature of a a mostly online Yom Kippur and the surge in web traffic it generated. The company had made the same point in a communication to its clients earlier that day.

“If there was like a Super Bowl for online synagogue access, it was Sunday night,” Platt said. “It just never happened before.”

Even as the anger simmered online this week, synagogue execs acknowledge there’s little alternative to the platform, which for all its shortcomings over the past week remains the best product of its kind.

“There’s not really much to jump ship to,” said Caroline Dorn, the membership director at Temple Shalom in Newton, Massachusetts, and one of the administrators of ShulCloud Users, a 500-member Facebook group for synagogue leaders who use the platform.

“This is the best of the synagogue management software. We’re much more interested in seeing Shul Cloud’s success. We don’t believe there’s a better product out there that can better serve our needs right now.”