Sukkot is mostly celebrated outside. That doesn’t necessarily make it safe during COVID-19. 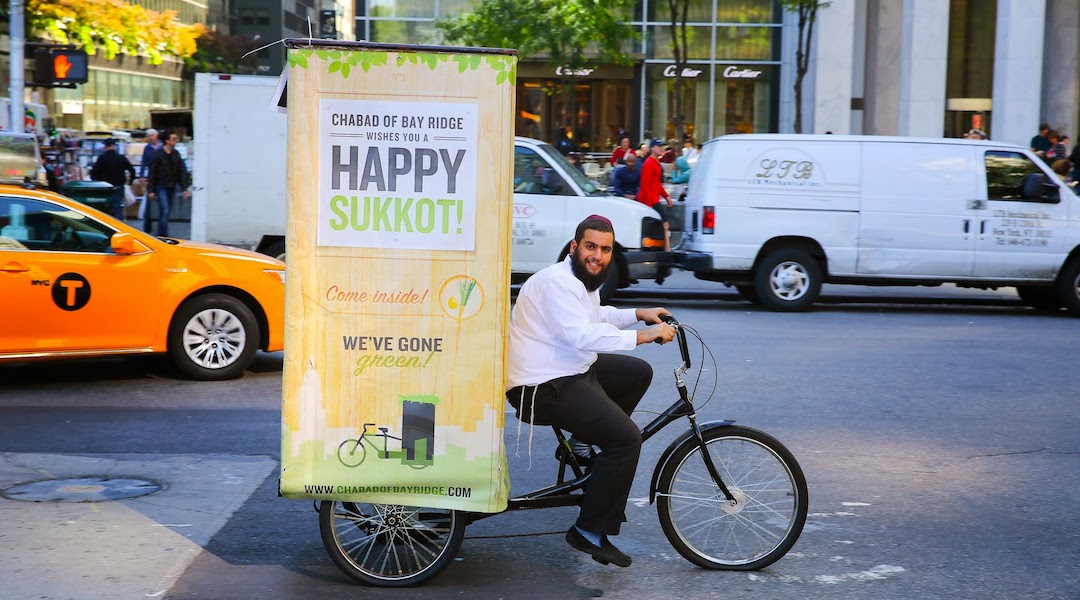 A Chabad emissary transports a mobile sukkah through New York City on a bicycle in 2014. Each year, Chabad emissaries build thousands of public sukkahs across the country and make sukkahs available on the back of bicycles and pickup trucks. (Courtesy of Chabad.org)
Advertisement

(JTA) — Sukkot, the harvest festival that Jews celebrate each fall, would seem to be designed for the COVID-19 pandemic. After all, it’s typically observed outdoors in temporary structures, allowing for more of the fresh air that is considered one of the easiest ways to reduce transmission of the coronavirus.

That’s making the large public sukkahs erected in parks, synagogues and streets in many observant communities especially exciting this year. After months of holiday celebrations that have been hampered by pandemic restrictions, Sukkot offered the prospect of a reprieve.

But public health experts say it’s important not to be lulled into a false sense of safety during Sukkot just because you’re not inside.

“While technically outdoors, sukkahs are enclosed much more than a typical outdoor setting,” Rabbi Dr. Aaron Glatt wrote recently in a message to his community published by 5 Towns Central addressing questions about the High Holidays. Glatt is the chief of infectious diseases and hospital epidemiologist at Mount Sinai South Nassau on Long Island, as well as an assistant rabbi at the Young Israel of Woodmere, a large Orthodox synagogue in Long Island’s Nassau County.

When considering socializing in a sukkah, doctors say the same precautions that apply to other social gatherings should be applied: wearing a mask and maintaining at least 6 feet of distance — a challenge in the structures that often are not that much wider across than that.

“The general rules for mixing [families] at meals apply just as well to a sukkah,” Glatt wrote about sharing meals in a sukkah. “I would be concerned with mixing unless there was adequate separation (at least 6 feet if not more) between family units.”

Many synagogues, which would normally make their sukkahs available for those who do not have their own to fulfill the mitzvah, or commandment, to eat in the sukkah, have shifted to a registrations system this year, allowing congregants to sign up for time slots online to avoid overcrowding and potential exposure in the sukkah.

At The Jewish Center, a Modern Orthodox synagogue in Manhattan, there will be two sukkahs available to members this year — on the roof and on the sidewalk in front of the synagogue. In a typical year, the rooftop sukkah could accommodate 180 people. This year, capacity will be limited to 30 at one time for social distancing purposes. There’s already a waiting list to book a time slot for the first two days of the holiday.

Jewish day schools, which are trying to operate in person even amid rising infections in many Jewish communities, are exhorting parents to play it especially safe. Some are even asking families to treat sukkahs as indoor environments, meaning they should not spend any time unmasked and inside with people they do not live with.

“A Sukkah should be considered indoors. Please only eat in the sukkah with your immediate family,” families at 15 Jewish day schools in the New York City area were told in a recent email offering holiday guidance and informing families that all students would need to undergo COVID-19 tests after the holiday.

“A four-walled sukkah is considered ‘indoors’ from a COVID-19 disease transmission perspective,” one Jewish elementary school in New Jersey told parents in a list of frequently asked questions about the holiday, which starts at sundown Friday.

For some communities, sukkah hopping, in which people (often kids or families) visit several sukkahs and eat something in each one, is a classic Sukkot holiday ritual. Many hoped the ritual, often an annual event for Hebrew schools and youth groups, might be safe because it happens outdoors.

But because many sukkahs are small in size and sukkah hopping often involves many people, Eili Klein, a professor of emergency medicine at Johns Hopkins Medical School in Baltimore, and Glatt told the Jewish Telegraphic Agency in August that the activity ideally would be avoided.

“Any activity which has mixing with a large group of people either serially or in a big group is not a safe activity,” Klein said.

“It’s not something that it’s going to be terrible if we don’t have the children go to a sukkah hop,” he said. “It’s a fun thing, but sometimes we don’t do fun things because pikuach nefashos [saving lives].”

For the Chabad movement, which for decades has built sukkahs in parks and other public spaces, the show will go on this year — with social distancing, masks and hand sanitizer available.

This year, some sukkahs will be adapted to increase air flow inside. Some will also have online registration to book time slots for private use  to reduce exposures.

“Some of the sukkah designs that I’ve seen look very similar to the outdoor dining concept,” said Motti Seligson, director of media relations for Chabad.org.

In addition to the public sukkahs, Chabad representatives will also be driving sukkah mobiles, sukkahs built on the back of pickup trucks, or small sukkahs on the back of bicycles to public spaces and even making house calls. They’re also providing online resources on how to build your own sukkah.

For those who get a slot in communal sukkahs, the experience is likely to be different from past years in more ways than one.

“We have not hung our canvas shell so as to maximize air flow,” Rabbi Yosie Levine wrote about The Jewish Center’s rooftop sukkah. “(Be sure to bring a sweater!)”