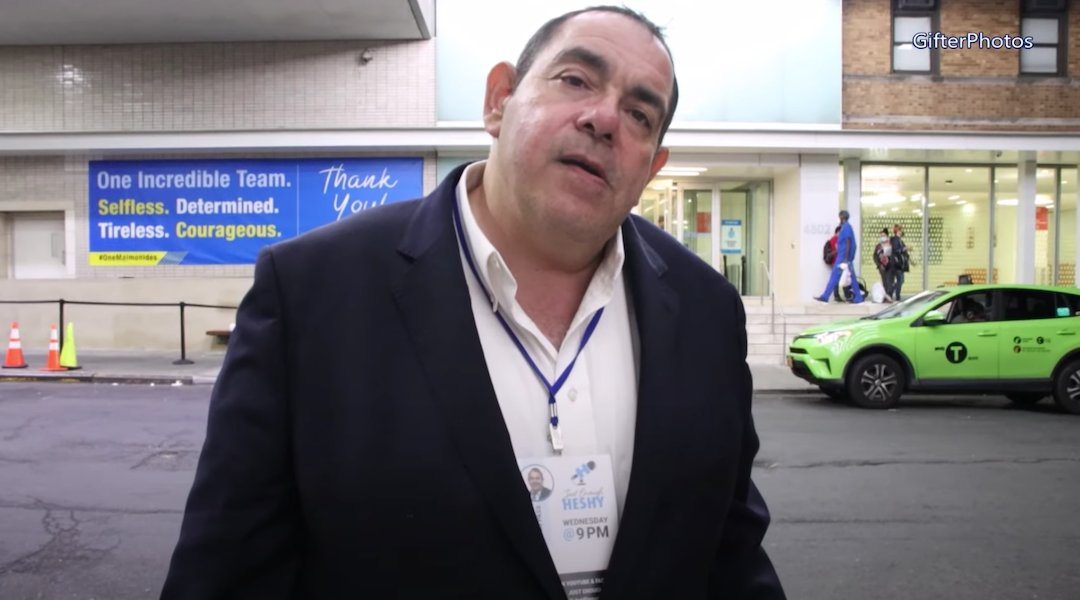 (JTA) — Heshy Tischler, the radio host turned leader of the Borough Park anti-lockdown protests, said he would be arrested Monday morning for inciting a riot against Jacob Kornbluh, a Hasidic reporter at Jewish Insider.

Tischler made the announcement in a video posted to Twitter Friday afternoon.

“I just got a call from the precinct, they will be arresting me Monday morning, I’ll be taken in for inciting a riot,” Tischler said, adding that he would turn himself in to the 66th precinct in Borough Park, though he might let the police “come get me” instead.

He concluded, as he does most of his videos, with a plug for his radio show.

A spokespersons for the New York Police Department said there remains an active investigation but did not confirm that Tischler would be arrested Monday.

Tischler was widely denounced by elected officials in New York this week after he cornered Kornbluh at a protest in the Borough Park neighborhood of Brooklyn on Wednesday night. In a video of the encounter, Tischler is seen screaming at Kornbluh as a mob falls in behind him. “Everybody scream moser,” Tischler yelled at Kornbluh, using a Jewish term for someone who informs on other Jews to secular authorities.

In a tweet shortly after the incident, Kornbluh said he had been punched and kicked by the crowd and that he planned to file charges. On Friday, Kornbluh spoke at a press conference organized by New York Jewish Agenda, a progressive Jewish organization.

“I hope the investigation will come to a clear conclusion and send the message that everyone, including reporters on the job and every human life, is precious to all of us,” said Kornbluh. “Nobody should feel unsafe walking the streets of New York City.”

New York City Mayor Bill de Blasio called the incident “unacceptable” and “disgusting.” Corey Johnson, head of the New York City Council, tweeted in support of Kornbluh. “The attack on @jacobkornbluh last night was horrifying and reprehensible. All those involved in this vile act must be held accountable,” he wrote.

On Friday afternoon, messages already circulated among Tischler’s supporters encouraging them to show up to his home on Monday morning to support him. “And make sure to have Trump flags,” the message concluded.

The Kornbluh incident was not the only time this week’s protests turned ugly. On Tuesday night, crowds of Hasidic protesters in Borough Park burned face masks on the street and chased a reporter out of the area. Around 2:00 AM Wednesday morning, a man who was taking video of the protest was chased and hit with a traffic cone. He was later taken to the hospital.