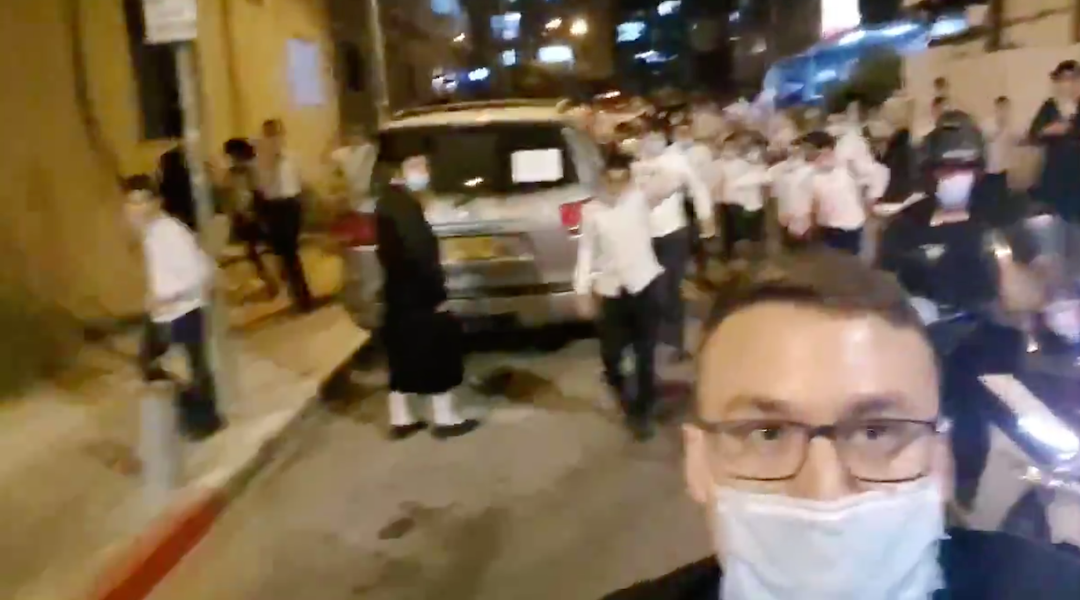 In Bnei Brak, Israel, reporter Ittai Shickman films himself chased by a mob of haredi Orthodox Jews while standing outside the home of a prominent rabbi. (Screen shot from Twitter)
Advertisement

BEIT SHEMESH, Israel (JTA) — As a journalist in Israel, Marc Israel Sellem has dodged shellfire and run through riots while working. But the Jerusalem Post photographer was still surprised by what happened Sunday when he set out to document the reopening of haredi Orthodox schools in violation of government restrictions aimed at curbing the spread of COVID-19.

As he began snapping pictures in Jerusalem’s Mekor Baruch neighborhood, passersby began screaming at him, accusing him of not caring about their community. As the confrontation escalated, one man grabbed at Sellem’s camera before punching him in the shoulder.

Scared of what would happen if the clash were to continue, Sellem hightailed it back to the Post’s nearby newsroom.

“I’m not a coward,” the veteran reporter told the Jewish Telegraphic Agency. “I’ve done stuff that’s dangerous, but people come and yell ‘you gentile, take off your kippah’… gevalt!”

Around the same time, in the haredi West Bank settlement of Beitar Illit, Channel 12 correspondent Carmel Libman found himself under attack by angry residents as he covered a similar story.

“Dozens crowded around me, throwing eggs, knocking on [my car] windows and shouting insults,” he tweeted. “When I managed to leave the Talmud Torah [Orthodox grade school] where the gathering took place and parked a few blocks away, the crowd came and surrounded me again.”

Sellem and Libman are not alone. Other Israeli reporters had similar encounters in the previous days, as members of Israel’s haredi Orthodox minority increasingly blame the media for their ills, including the stringent lockdown conditions imposed on their towns and neighborhoods. According to a joint Israel Democracy Institute-World Zionist Organization poll released this week, more than four out of five haredi Israelis view their community as a target of hate, with 75% blaming the media.

Israel imposed a national lockdown in mid-September, as the country’s per-capita coronavirus infection rate became the worst in the world. As the country began to ease those restrictions this week, it initially left the lockdown rules in place in a number of heavily haredi areas, where infection rates remain higher. According to Israeli health officials, haredi communities have accounted for at least 34% of all cases despite comprising just 12% of the total population.

The dynamics in those areas have mirrored those of haredi Orthodox communities in the United States during the pandemic. With high population density and communal prayer and learning playing a central role, distancing is less practicable. Mask wearing has also been less consistent in Israel’s haredi enclaves, and rules including school closures have sometimes been flouted.

Just as in the United States, haredi critics of Israel’s lockdown have claimed that the rules were applied unevenly, pointing to mass anti-government protests and asking why they could not keep their synagogues open if other large-scale activities were permitted. (Large protests were briefly banned during the lockdown, too.) During the High Holidays, clashes took place between haredi Jews and law enforcement officers tasked with shutting down mass gatherings.

One of those perceived threats is negative press coverage, which some haredi Israelis engage in violence to prevent, said Gilad Malach, a researcher at the Israel Democracy Institute who studies Israel’s haredi Jews. For those engaging in violence, it is “not the behavior but the coverage” that is the root of the problem, he said.

According to Rabbi Shmuel Pappenheim, a former spokesman for Eda Haredit, a rabbinic organization representing a right-wing faction of the haredi community, the real difficulties the pandemic has posed in maintaining the highly structured lifestyle typical in haredi communities has led to outrage at anything perceived as a threat to traditional practices.

When full-time yeshiva studies are suspended, haredi children “ask questions and behave in ways that are very frustrating to the parents,” he said, adding that, “the ultra-Orthodox leadership has no solution to this situation” and feel that they are “not understood.”

In the face of such a challenge, when many members of the haredi community have little access to “the leadership, the politicians, the decision-makers,” he said, they vent their rage at the press.

“The haredi community (to the extent that it can be talked about as a singular entity) is spinning this as persecution and singling them out,” said Yoel Finkelman, curator of the Judaica Collection at the National Library of Israel and the author of a book about haredi media.

The haredi orthodox are “very concerned about bad publicity” and, as such, the current situation has created “the perfect conditions for violence against journalists,” he agreed.

A similar situation has played out in Hasidic communities in the United States. Earlier this month, Jacob Kornbluh, a reporter and member of the Hasidic community in Brooklyn’s Borough Park, was assaulted during a protest and subjected to a campaign of intimidation for his reporting on the pandemic.

Kornbluh said he expects the attacks to continue “as long as community leaders and rabbis don’t come out and say explicitly that any violence, especially against a member of the press, is unacceptable.”

There is a lot of “anger and frustration in these communities,” Kornbluh said. “And they are letting it out [at] anyone coming close to them — law enforcement, city officials or members of the media.”

The current spate of attacks in Israel began during the festival of Sukkot on Oct. 4, when Channel 13 reporter Yossi Eli was attacked by a mob in Jerusalem’s Mea Shearim neighborhood. Taking refuge in his car, he recorded his attackers punching and kicking the windows, one of which was eventually shattered by a rock.

That same day, Jerusalem Post religious affairs correspondent Jeremy Sharon was assaulted while documenting hundreds of members of the Belz Hasidic sect entering a building for a mass gathering in honor of the holiday.

“Someone tried to grab my phone and another just came up to me and started punching me,” he recalled, describing how he was then chased for about 100 meters before escaping.

Like Sellem, Sharon believes that anger among haredi Israelis is driven in large part by the perception, shared by many across the religious and political spectrum, that the government’s rules have been inconsistent and capricious.

While many haredi Israelis are not actively hostile to the press, the community’s extreme fringes are currently “concerned that what they are doing will be exposed and will create problems with the police,” he said.

One guy started hitting me, another tried to grab my phone, another two tried were running after me and two tried to block me leaving the drive way. https://t.co/P1Snq7xdSL

On Oct. 7, three days after Sharon was attacked, Army Radio reporter Shahar Glick also ran into trouble covering an event held by the Belz Hasidic sect. After rebuffing a man’s suggestion that he leave the area, he was jumped by several men who beat him, stole his phone and forced him into an alley. Telling Glick that he was taking his life into his hands by covering their community, they photographed his identity card and informed him that they now knew where he lived.

There were three other incidents that day. In Bnei Brak, Israel, reporter Ittai Shickman films himself chased by a mob of haredi Orthodox Jews while standing outside the home of a prominent rabbi. (Screen shot from Twitter)In Jerusalem, a glass bottle was thrown at Mynet reporter Liran Tamari. And in Beit Shemesh, i24 reporter Pierre Klochendler was verbally harassed by angry locals who stole some of his equipment.

As he left the neighborhood under a police escort, “kids threw stones on the windscreen and tore off one of the antennas.”

WATCH! i24NEWS' correspondent Pierre Klochendler and cameraman approached a group of ultra-Orthodox, offering them the opportunity to talk.
In response, the group harassed and kicked them, shouting: 'Go Home! Move from here !' pic.twitter.com/7Ce4NsQ2Vp

For Sellem and other journalists who have found themselves in his position, tensions over media coverage of haredi communities seem likely to stretch on as long as the coronavirus crisis does.

“They think they have problems because of what’s in the media but the real enemy is corona, not the government or the press,” Sellem said.