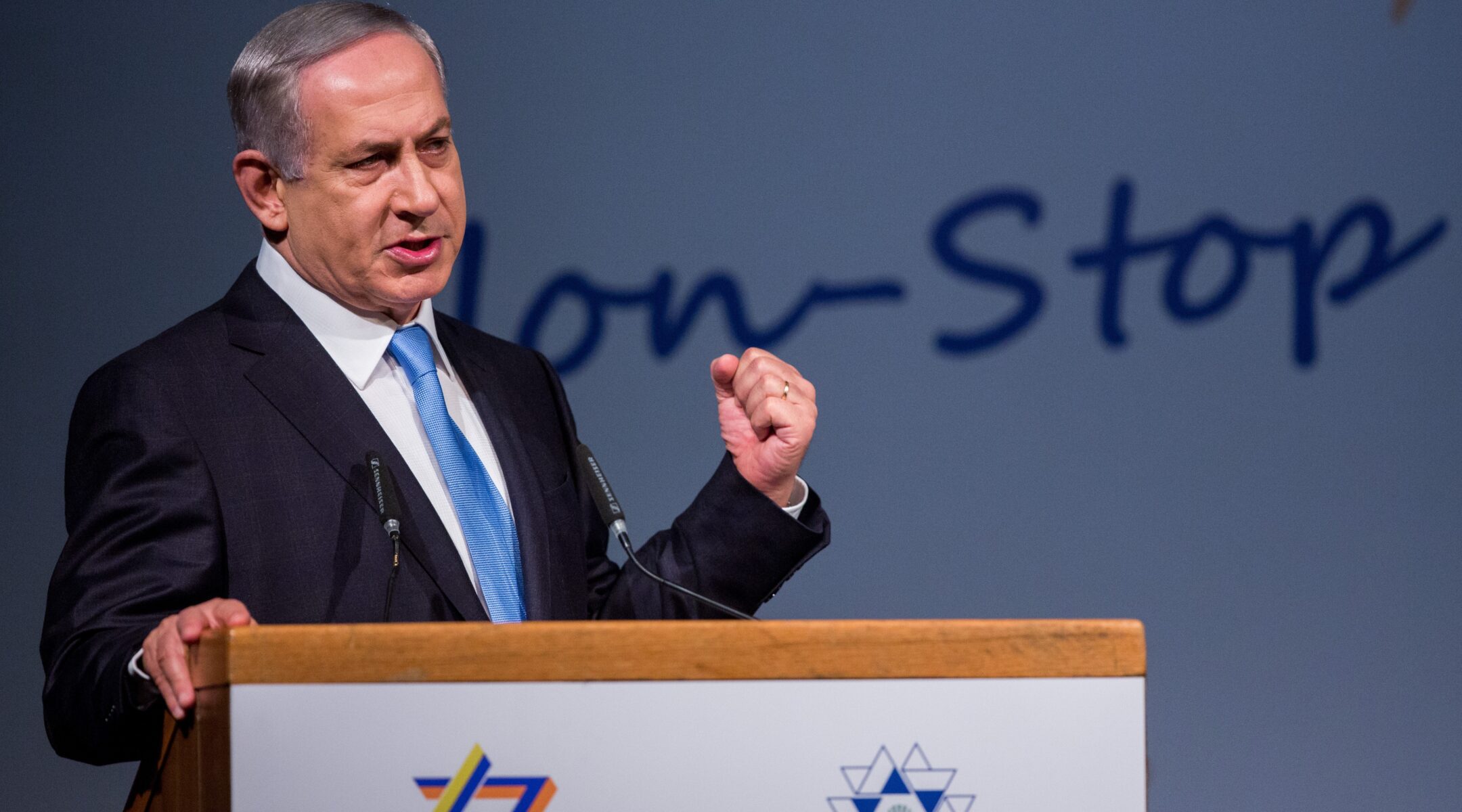 Israeli Prime Minister Benjamin Netanyahu speaks during the 37th World Zionist Congress in Jerusalem in 2015. The 2020 Congress was held virtually due to the coronavirus pandemic. (Yonatan Sindel/Flash90)
Advertisement

(JTA) — A virus forced the World Zionist Congress to go virtual for the first time since its founding in 1897.

But that didn’t stop last week’s gathering, held once every five years, from being any less crucial — or less contentious — for the future of Israel and the Jewish people.

Nor did it dampen enthusiasm for the event among the American delegation, which hailed from 28 states plus Puerto Rico and Washington, D.C., after an election last winter that saw record voter participation. Of the 750 delegates to the 38th World Zionist Congress, which held its virtual meeting Oct. 20-22, roughly one-third were from the United States.

“The work of Zionism — supporting Israel and connecting world Jewry to our national homeland — must continue despite the global pandemic,” said Richard Heideman, president of the American Zionist Movement, which organized the U.S. delegation and last winter’s election. “This crisis has, however, given us a special opportunity to enable more delegates and alternates than ever before to participate in a World Zionist Congress.”

More than 123,000 American Jews from all 50 states voted in the Zionist elections that concluded in March – more than double the number that participated in the previous vote, in 2015. In all, 15 slates comprised of nearly 1,800 candidates vied for 152 American seats in the Congress, with the number of delegates per slate apportioned using a formula devised by the American Zionist Movement. The votes represented the highest number cast since open Zionist elections were adopted in the American Jewish community 30 years ago.

The high rate of participation may be a sign of the growing importance with which American Jews view the World Zionist Congress, which determines the leadership of the World Zionist Organization, the Jewish Agency for Israel, the Jewish National Fund-Keren Kayemet LeIsrael and Keren Hayesod. Together, these four institutions allocate roughly $1 billion annually.

“In broad terms, this is the parliament of the Jewish people. It’s the world’s most democratic gathering of the Jewish community,” said Kenneth Bob, president of Ameinu and head of the Hatikvah slate, which represents 11 different progressive Jewish organizations, including the National Council for Jewish Women, the New Israel Fund and J Street. “Even with Zoom, it’s still very participatory.”

In fact, the three-day virtual conference included some unusually intense wrangling among the delegations. Right-wing and Orthodox parties, which represented a majority at the Congress, surprised many with a bid to install their own picks in key leadership positions at international Zionist institutions rather than agreeing to consensus choices, which had been the custom at past conferences. Such a move would have neutralized any potential power of the left-wing parties.

Pesach Lerner, the New York rabbi who heads Eretz HaKodesh, an Orthodox party that was part of that right-wing effort, said the move was justified because of the political positions leftist groups have taken.

“When President Trump moved the U.S. Embassy from Tel Aviv to Jerusalem, these movements came out against it,” he said. “My people travel to Israel, they buy apartments in Israel, and they send their kids to learn in Israel. We’re anti-BDS, we’re pro-Israel and we lobby on behalf of those who fight for Israel in Washington.”

Sheila Katz, the NCJW’s chief executive and a first-time delegate on the Hatikvah slate, bristled at the attempt to silence the voices of groups like hers.

“The whole reason I was excited about this was to live out Herzl’s vision that there would be diverse views. But I didn’t run for this congress just to have my power taken away,” said Katz, 37. “The key issue of this conference has really emerged around pluralism and who gets to have this power.”

At the same time, Katz said of the U.S. delegation, “It’s very exciting to see so many younger people at the table. They’re infusing a lot of energy into this process, and the AZM has done an excellent job in working to diversify the type of people who show up at this Congress.”

In the end, the effort to limit the influence of the left-wing parties failed. A compromise was reached after delegates to the Congress from certain centrist delegations, who traditionally don’t cast votes because they are appointed rather than elected, threatened to break with precedent and vote against the right-wing parties unless they agreed to some concessions.

Some on the right, such as the Zionist Organization of America, hailed the outcome as a victory.

“The center-right wing bloc, of which ZOA Coalition is a substantial and vital part, prevailed in the World Zionist Congress elections earlier this year, and thus was entitled to prevail in allocation of National Institution positions,” said Morton Klein, ZOA’s national president.

“While the new agreement gives power to one side of the political spectrum, we remain confident that the changes preserve the national and pluralistic character of our Zionist Institutions,” MERCAZ USA, which with 18 delegates represents Conservative Judaism within the Zionist movement, said in a statement. “MERCAZ, the Masorti/Conservative Movement, along with a coalition of Zionist parties in Israel and the Reform Movement, and the support of the Zionist organizations (Hadassah, B’nai B’rith International, Maccabi World Union, WIZO and NAAMAT/USA), succeeded in blocking a divisive agreement and reached an agreement incorporating significant changes, which ensures checks and balances and inclusion of all the Jewish People in the leadership of our Zionist Institutions.”

For Sarrae Crane, the executive director of MERCAZ USA, this was her sixth World Zionist Congress — and, of course, her first virtual one.

“It’s so much better than nothing, but it’s not the same as being in a hall with people and talking with delegations from around the world,” she said. “That’s really missing.”

Religious pluralism in Israel is top of mind for Crane.

“We’re a halachic movement and we believe there’s more than one legitimate way to be Jewish, yet in Israel there’s a chief rabbi who doesn’t recognize us,” she said. “We want them to recognize our rabbis as rabbis and our conversions as conversions, and allow olim [new immigrants] who have been converted by Conservative rabbis. We’re a very strong believer in pluralism — and we want to work with the other groups to create a more pluralistic, welcoming Jewish community.”

“This unique World Zionist Congress session that just ended saw intense involvement by a broad and diverse array of Zionist groups from America,” Block said. “We expect this active involvement in promoting Zionism will continue — in a spirit of unity and a commitment to respectful dialogue.”

As for the next World Zionist Congress, Block said he hopes for “Next year in Jerusalem – in person!” (A global conference in Israel to make up for the deferral of this year’s in-person congress is being planned for late 2021 or early 2022.)

This article was sponsored by and produced in partnership with the American Zionist Movement, which works across a broad ideological, political and religious spectrum linking the American Jewish community together in support of Israel, Zionism and the Jewish people. This article was produced by JTA’s native content team.