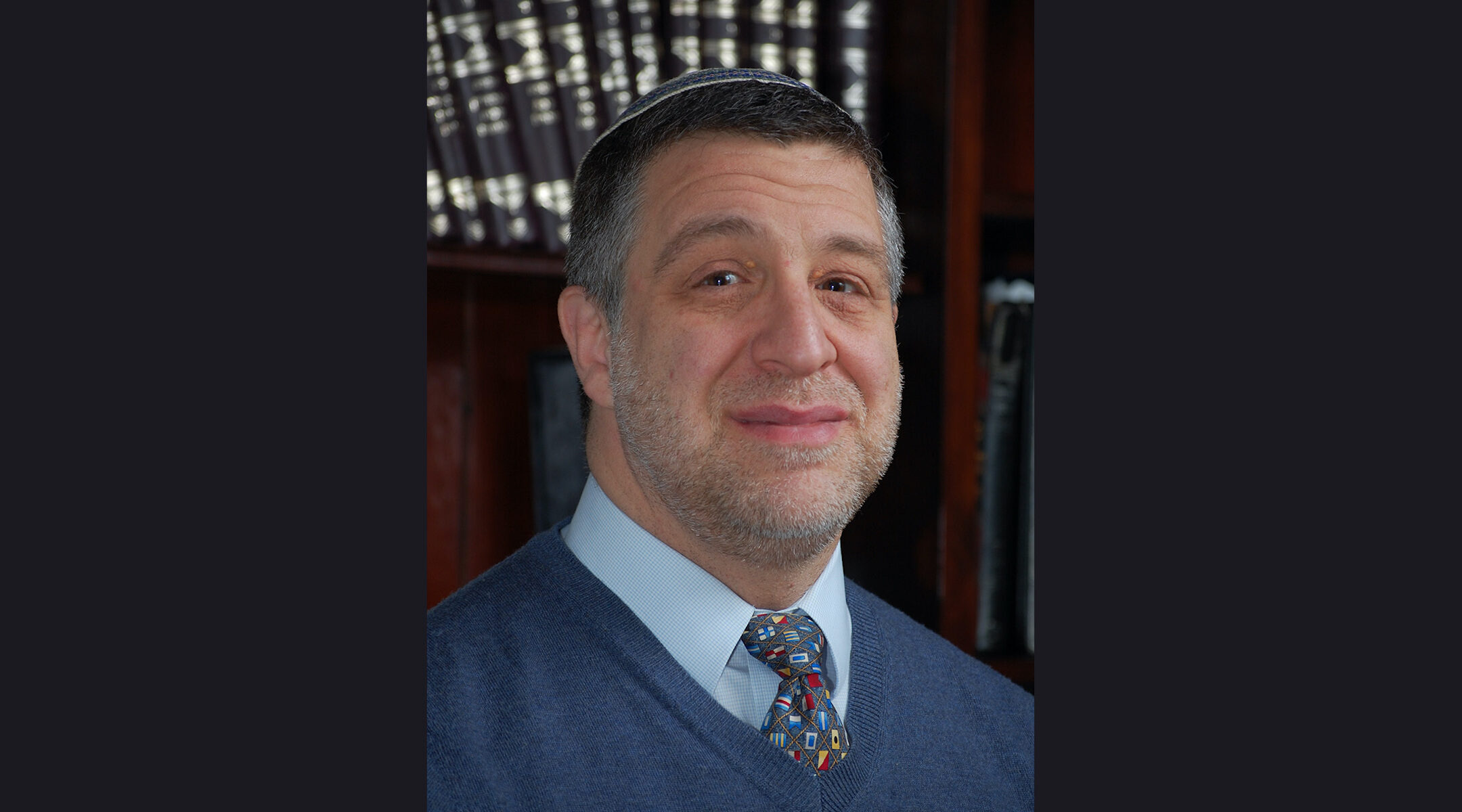 Rabbi Barry Kornblau, unlike what polls say is a majority of his fellow Orthodox Jews, has been vocal about his support for Vice President Joe Biden. (Courtesy of Kornblau)
Advertisement

(NY Jewish Week via JTA) — Rabbi Barry Kornblau, the rabbi of the Young Israel of Hollis Hills in Queens and a previous staff member at the Rabbinical Council of America, will not forget the moment he lost trust in the Trump campaign.

“In 2017, I was sitting in the Indian Treaty Room near the White House, listening to Sebastian Gorka,” recalled Rabbi Kornblau, 55, referring to President Donald Trump’s former deputy assistant. At the time, Kornblau was taking part in a lobbying mission on behalf of the Orthodox Union, the largest Orthodox umbrella group.

While he does not remember exactly what Gorka was speaking about, he remembered “the combination of nationalist fanaticism and charisma” with which the former Trump staffer spoke. “I was appalled that an individual like this was part of the administration of the president of the United States,” said Rabbi Kornblau. “At that moment, I decided I would not engage with this administration. I realized we can’t treat this like normal times.”

Rabbi Kornblau has kept his word. Over the last four years, he has quietly and persistently spoken against Trump’s anti-immigrant rhetoric and the encouragement given to white supremacist groups by the president and his circle.

Last week, the rabbi published an opinion article in the New Jersey Jewish Link titled “Why Orthodox Jews Must Vote for Joe Biden.”

In the lengthy article, he cites Trump’s response to the Covid-19 pandemic, saying Trump “turned public health into a partisan issue, called a world-renowned infectious disease expert an ‘idiot,’ and reduced confidence in a vaccine even before it’s been tested.”

Kornblau is bucking well-documented trends in the Orthodox Jewish community: According to a survey conducted by the charedi Orthodox Ami Magazine, 83% of Orthodox Jews said they will vote for Trump, compared to just 13% who said they’d support the Democratic Party’s nominee, Joe Biden.

In an American Jewish Committee survey released Oct. 19, Trump is preferred by 74% of Orthodox; that’s a mirror of the 75% of all Jews who support former Vice President Joe Biden and the 22% who favor the incumbent.

Orthodox voters tend to vote hawkishly on Israel and appreciate Trump’s decision to move the U.S. Embassy to Jerusalem and scuttle the Iran nuclear deal. Trump’s ambassador to Israel, David Friedman, is himself a member of Long Island’s Orthodox community and a prominent supporter of the settlements. Orthodox voters also tend to be conservative on social issues like public funding for private schools, and agree with the law and order rhetoric that Trump has directed at big cities where Orthodox communities tend to cluster.

The coronavirus pandemic, which has hit their communities hard, has also pushed Orthodox voters, especially from the insular haredi camp, into Trump’s arms. This week the president tweeted his thanks for  13 prominent haredi Orthodox rabbis who, back in June, praised Trump for demanding that houses of worship remain open despite the spread of COVID-19. Protests in Orthodox Brooklyn against state and city pandemic restrictions have turned into pro-Trump rallies.

But, according to Rabbi Kornblau, the numbers showing Orthodox support for Trump can be misleading. He said he personally knows of “many” Orthodox leaders, including prominent rabbis, who are deeply critical and fearful of Trump, but are unable to voice their opinions because of communal responsibilities and institutional affiliations.

The notable silence from centrist Orthodox leaders supporting Biden — made only more dramatic by the raucous support of Trump on the right — points to a “fundamental conundrum” of the modern-day rabbinate, he said. 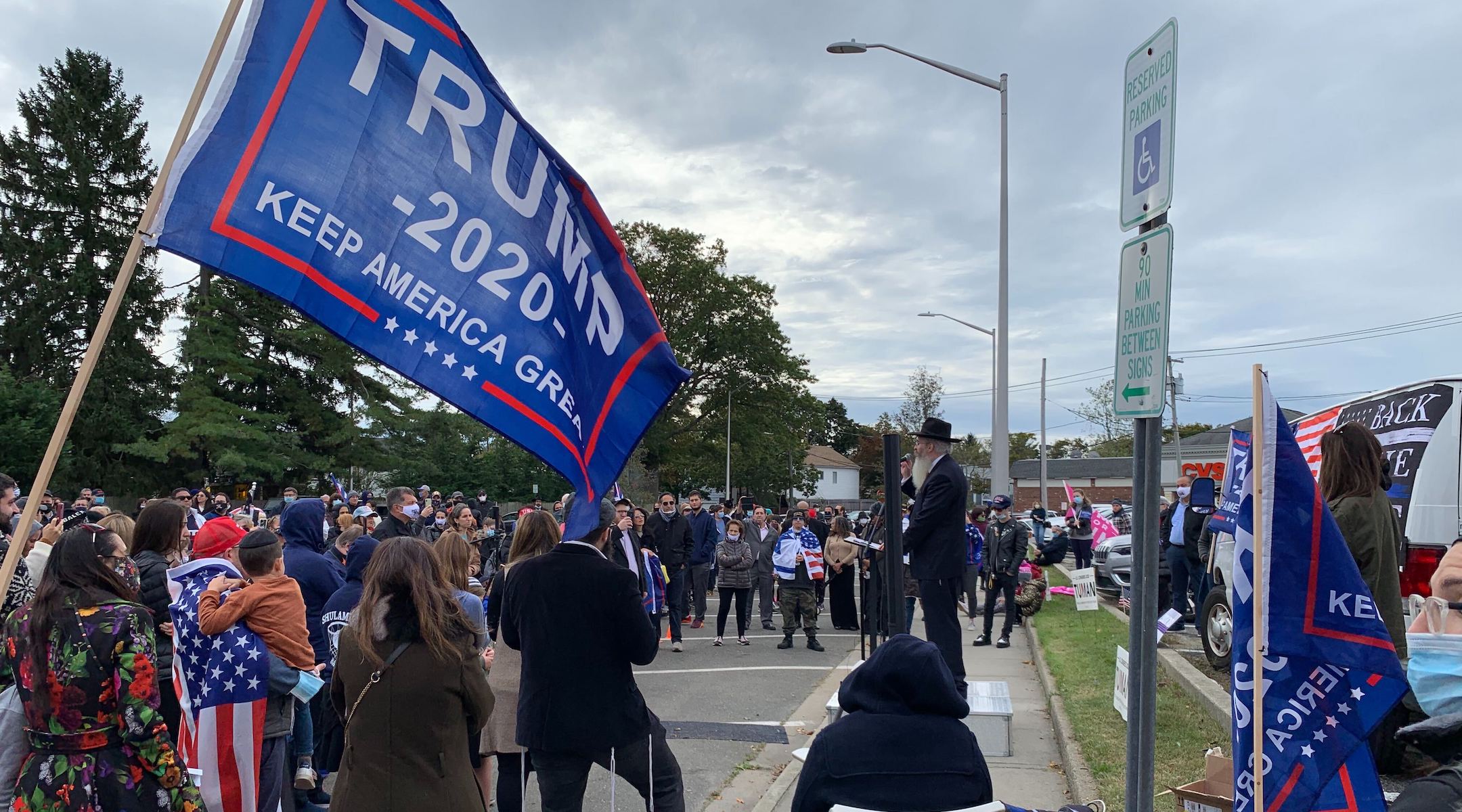 Rabbi Yitzchak Smith, a rabbi and lawyer who has has recently gained a following by promoting the idea there that COVID-19 testing is a government ploy to hurt Orthodox Jews, addressed a rally in support of Donald Trump and religious freedom in Long Island Sunday. (Shira Hanau)

“Ultimately you’re always employed by a community or an institution, and unless you’re willing to risk your job, or at best receive tremendous flak, your hands are tied,” he said. The “potential to alienate members of your own community” is too pronounced for most pulpit rabbis to speak out, he said.

“I think that most pro-Biden Orthodox rabbis are doing the right thing by being quiet, because their primary duty is to their community,” he said. “The silent rabbis aren’t only avoiding problems. They’re doing an affirmative good because their job is to foster shalom, communal harmony. The gap between a leader and his flock can’t be too large, or the flock won’t follow and the leader won’t lead.”

Orthodox communities also have a way of enforcing conformity. Rabbi Kornblau recalled receiving a letter from one Orthodox young woman who said that her match-making prospects have wilted because of her Democratic politics. Others have written to him describing feeling personally and religiously ostracized by the Orthodox world’s seemingly monolithic pro-Trump stance.

“‘It’s hard to be constantly told you’re not a frum Jew if you don’t support Trump,’” quoted Rabbi Kornblau from one message he had received after publishing his op-ed. “‘It would be much easier to leave the frum world.’” (“Frum” is a colloquial term meaning Orthodox or religious.)

“When the majority of community leaders are describing Torah values and Republican political stances together, it makes people, especially young people, wonder how they can stay part of a community like that,” he said. “They’re saying if these are Orthodox values, it would make more sense not to be Orthodox. We are — and will — pay a high price for the gross politicalization of communal life.”

“Can you imagine,” he continued, almost as though speaking to himself. “We’ve reached a point where people are questioning their own religious identity because they don’t agree with the president of the United States — is this really where we are?”

Rabbi Kornblau, who had been reticent to speak to the press, gave an interview to The Jewish Star in March 2019 criticizing the president of the National Council of Young Israel, an umbrella organization for his Modern Orthodox movement, supporting Otzma Yehudit, a far-right, anti-Arab political party in Israel. He was among a small but vocal group of Young Israel rabbis who were critical of the national organization’s right-wing advocacy. The Otzma Yehudit statement was “the final hammer blow, the straw that broke the camel’s back,” told the interviewer.

(NCYI’s president, Farley Weiss, later issued a clarification saying that the statement of support for the party represented his own “personal views and that of many on our board, but may not reflect the view of all of the Young Israel synagogues.”)

Asked why he has been increasingly vocal in the weeks before the election, Rabbi Kornblau cites tradition.

“‘In a place where there are no men, strive to be a man,’” he responded, quoting a famous Mishnaic aphorism by the rabbinic sage Hillel.

The response to his article calling for Orthodox Jews to vote for Biden has been “overwhelming,” said Kornblau. He has been contacted by “countless Orthodox Jews whose personal lives have been damaged because they do not support Trump. Our community will pay a steep price for this,  no matter who wins.”