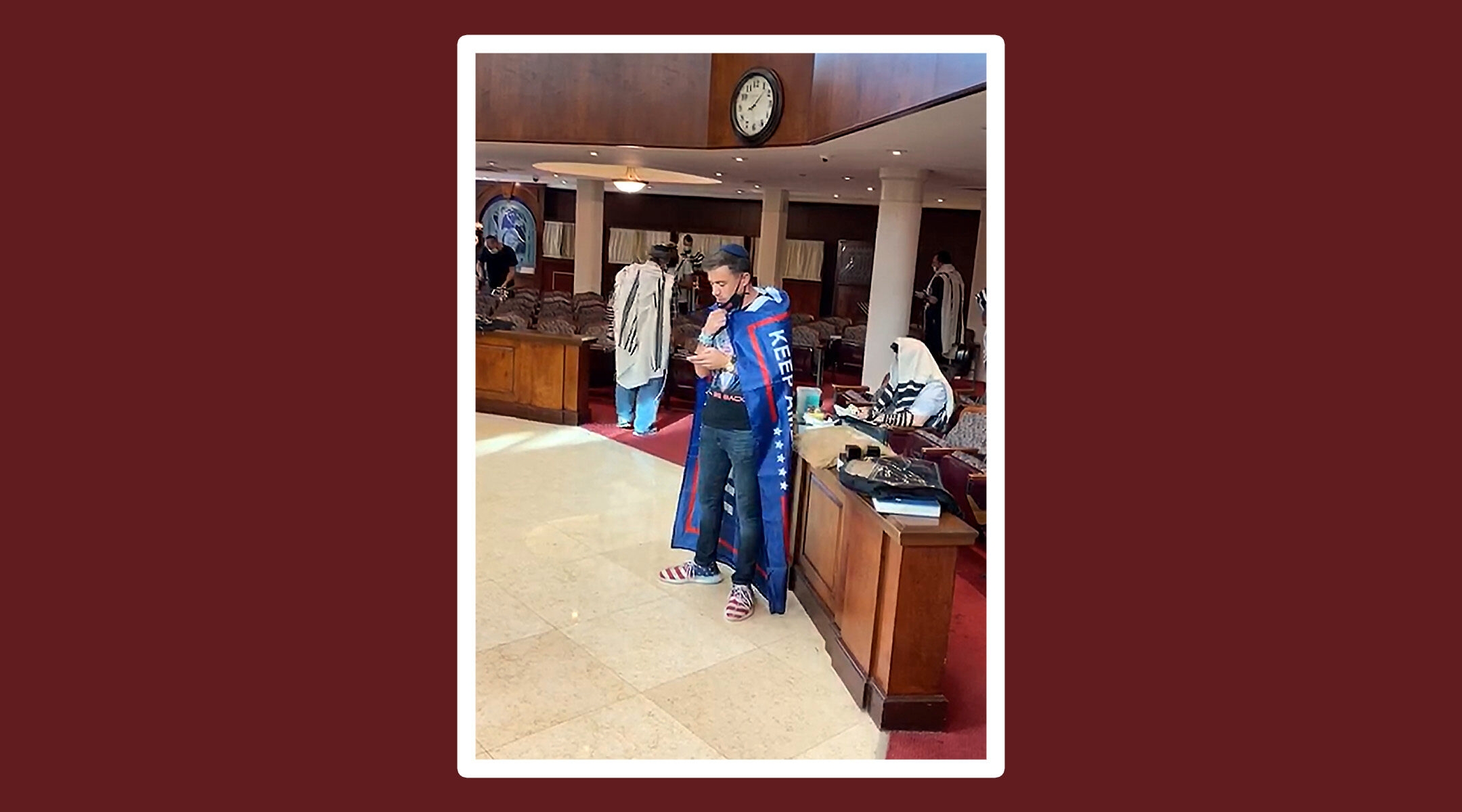 Videos circulated of a man reciting a prayer for victory for Donald Trump in an Orthodox synagogue Tuesday morning. (Screenshot from WhatsApp)
Advertisement

(JTA) — When Rabbi David Seidenberg wrote a prayer for the presidential election in 2004, he wanted it to be usable by people on both sides of the political aisle.

This year, he added lines calling for the tearing out of tyranny and the pulverization of plans to undermine democracy — in an acrostic spelling out “Trump,” the name of the president he hopes will be voted out of office.

He expected that part of the prayer would be used by people who, like him, hoped to vote Donald Trump out of office. But he was surprised to find that some Trump supporters are using it, too.

“It kind of makes me happy,” Seidenberg said. “Because I think, well, God can take their intention and turn it into what’s good also.”

Seidenberg’s “A Prayer for the Election” is one of several pieces of new or adapted Jewish liturgy circulating on Election Day, as Jews of all political stripes turn to prayer to help them cope with the end of a contentious, high-stakes season in American politics.

In Park Slope, Brooklyn, Rabbi Rachel Timoner and Rabbi Stephanie Kolin wrote an adapted version of the standard prayer for the government to be recited in synagogues. Their “Prayer for Our Country” asks God to “give the people of our land the courage and safety to cast their ballots in peace” and to “spread your shelter of peace over our country, that we might have a clear and peaceful outcome to our election.”

Writer and scholar David Zvi Kalman wrote a “Prayer for the Electorate” in 2016,asking God to protect voters and “save them from a wicked path.”

“I didn’t really anticipate that the synagogues would be empty on the Shabbat before the election, and I also didn’t anticipate that preserving the integrity of the election would need to be in this prayer, but there you have it,” he wrote in a Facebook post, sharing the prayer last week.

Videos circulated on Orthodox WhatsApp groups of men reciting Hebrew prayers in honor of Donald Trump’s re-election after Tuesday morning prayers in Orthodox synagogues. In one video, a man wearing a tallit and tefillin read a Hebrew prayer “for the victory of Donald Trump,” asking God to grant him another four years. In another video, a man draped in a Trump flag read the same prayer from his phone. “May God also bless Joseph Biden to remain a private citizen for the rest of his life,” he said after finishing the prayer.

Some Jews are turning to traditional prayers while they wait for election results, or to influence their results. In a WhatsApp group called Tehillim for Trump, dozens of people split the reading of the entirety of the book of Psalms to recite to help bring about a victory for Trump. Meanwhile, progressive Orthodox Jews in the Facebook group Torah Trumps Hate organized their own recitation of Psalms, with so many people committing to saying the prayer that the group planned to complete the liturgy four times over.

Other Jews have created rituals to help them get through the election season. Rachel Grant Meyer, a rabbi who works at the immigration advocacy organization HIAS, paired up with Rabbi Kerry Chaplin to launch a “micro ritual” rooted in the Hanukkah practice of adding one candle each night.

“While it isn’t yet the physically darkest time of year, I do not recall a time during my lifetime that has felt as bleak as the one in which we now find ourselves. So maybe we need a little Hanukkah in October,” Meyer wrote on Facebook earlier this month. “In that spirit, a micro ritual for those who need a lift up out of the darkness: Each day, for the next 8 days, join me in lighting a candle and saying, ‘We have. We can. We will.’”

And T’ruah, the rabbinic human rights organization, organized a Tikkun Leil Election event for Tuesday night modeled after the traditional all-night Torah learning held on the holiday of Shavuot. The program will include singing, words of Torah and spiritual art-making sessions interspersed with updates on election returns.

No matter how the election ends, Seidenberg hopes people will continue to recite his prayer, even after voting ends.

“Not just today but tomorrow if we’re still dealing with the election and the next day,” Seidenberg said. “And actually no matter what happens in the election because it’s a prayer about how the people of the country should come together to unite and pursue peace and fight racism.”