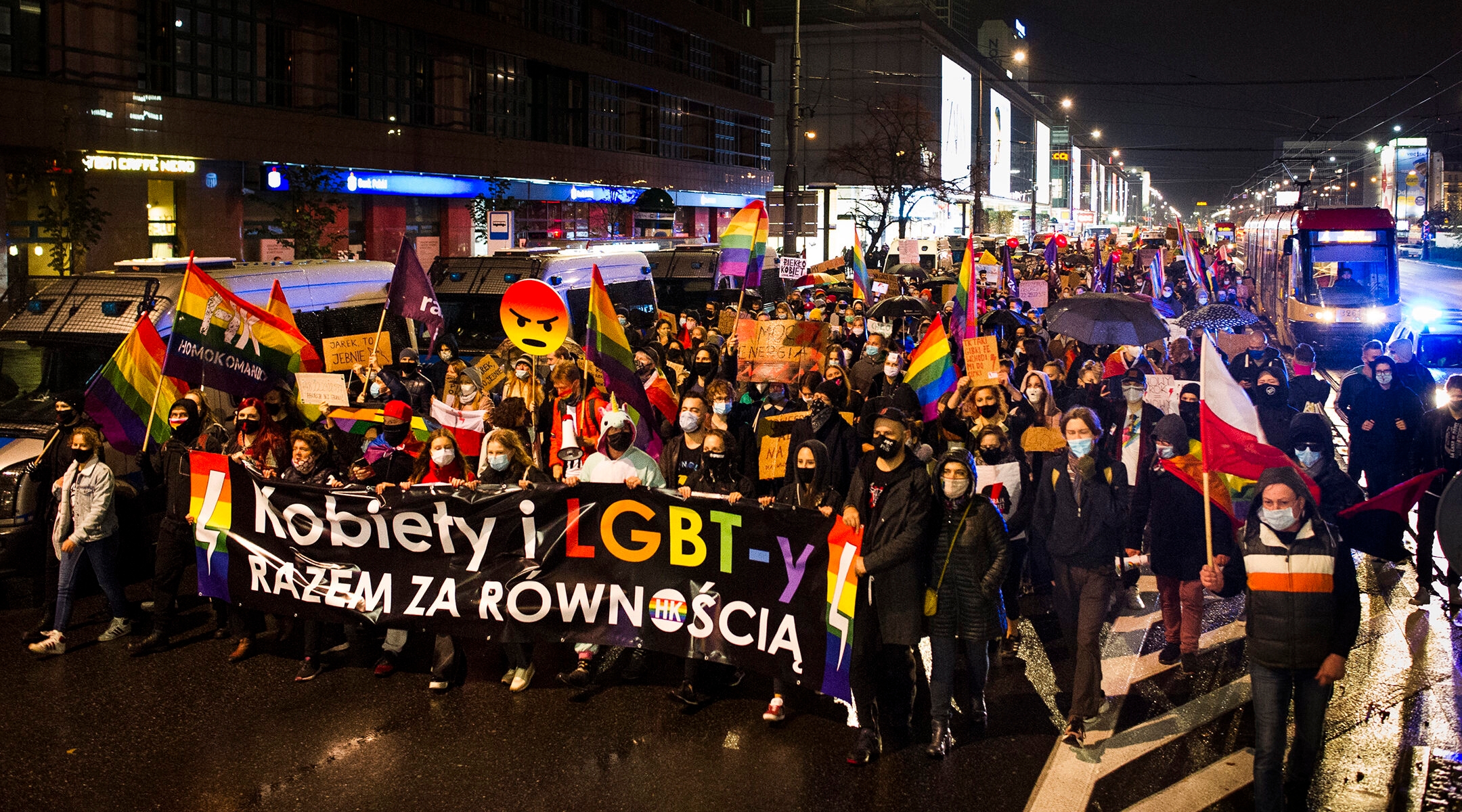 (JTA) — The debate on abortion access, which for years has polarized the predominantly Catholic nation of Poland, is now dividing the country’s Jews as well.

A high court ruling last month severely restricting access to abortions in what was already among Europe’s least pro-choice countries has prompted a major protest movement in Poland. The backlash has taken aim squarely at the right-wing Law and Justice party, which critics say has eroded the independence of the judiciary in the pursuit of conservative policies. All but one of the 15 justices of the Constitutional Tribunal which issued the Oct. 22 ruling were appointed by the party.

The fact that protesters vandalized several churches — a rare occurrence in Poland — has inflamed tensions even further.

Among Polish Jews, the protests have trained a spotlight on long-simmering ideological rifts within the community that have repeatedly spilled into public view since Law and Justice first rose to power in 2014.

The latest flare-up was touched off by a statement endorsing the protests by the Religious Jewish Community of Warsaw, a nonprofit organization with a multidenominational membership that claims to represent the interests of Jews in the city, home to the majority of the 7,000 Poles who self-identify as Jews.

In the first statement on abortion ever issued by a Polish Jewish communal organization, the group said it understands the anger of Polish women facing the loss of their right to make independent decisions about their their health.

“It is sad and painful that today women and men who support them are forced to defend their rights on the streets of Warsaw and all over Poland amid the coronavirus pandemic, which is dangerous for their health and life,” the group said in a statement Tuesday. “We agree with the protesters that women have the right to decide for themselves and live with dignity.”

The statement prompted a retort from Rabbi Mayer Stambler, an emissary of the Orthodox Chabad-Lubavtich Hasidic movement, who asserted that the Warsaw community’s position was neither a consensus among Polish Jews nor in agreement with Jewish principles.

“The Torah sanctifies life, which means we cannot take lightly the taking of the life of a fetus, who holds the potential of decades of human life,” Stambler said in a statement. Aborting a fetus, if not performed to save the mother’s life, could be tantamount to murder — a view, he said that “has been the position of the rabbis of Poland throughout history and is the position of anyone who cares about the authentic Jewish tradition.”

Stambler added that he hopes “the Polish government gives financial assistance to women who step back from carrying out an abortion so that they may raise their children more comfortably.”

The split is just the latest in a series of disagreements that have divided the more progressive leadership of the Jewish community from its Orthodox members and hampered the community’s ability to speak in one voice — even on the issue of anti-Semitism, which some claim Law and Justice has inflamed.

In 2017, the Jewish Community of Warsaw wrote to Jaroslaw Kaczynski, a co-founder of Law and Justice, warning that rising anti-Semitism has made Polish Jews “fearful for our security as the situation in our country is becoming more dangerous.” Two weeks later, Kaczynski met with Stambler and other Polish Jews, who had earlier condemned the letter as an attempt to hijack Polish Jewry to settle progressive scores with the government.

A bitter exchange ensued, which was the first time in decades that Polish Jewish groups conducted a public argument along partisan lines. One of the low points came when one communal leader, Sergiusz Kowalski, a president of the Polish branch of B’nai B’rith, publicly accused those who met with Kaczynski of being “court Jews.”

Piotr Kadlcik, a longtime leader of Polish Jewry until his replacement in an election in 2014, said it was unusual for communal leaders to wade into the debate on abortions. It was even more unusual that the Warsaw community’s statement didn’t mention the vandalism of the churches, he added.

Polish Chief Rabbi Michael Schudrich seems to be on the same page as Kadlcik, writing in a recent letter to the heads of the Catholic Church in Poland that he was “deeply concerned over the graffiti drawn on churches and disturbances during prayers.” The letter also said he supports the rights of peaceful protesters to demonstrate and that “as clergy we must try to feel the pain of women and men” who do so.

Schudrich ended the letter with a reference to the divisions underlined by the debate, which seems to apply as much to Polish Jews as it does to the wider society.

“It is our Biblical moral obligation to bring our nation back together by empathizing and loving even those whom we disagree with,” Schudrich wrote.