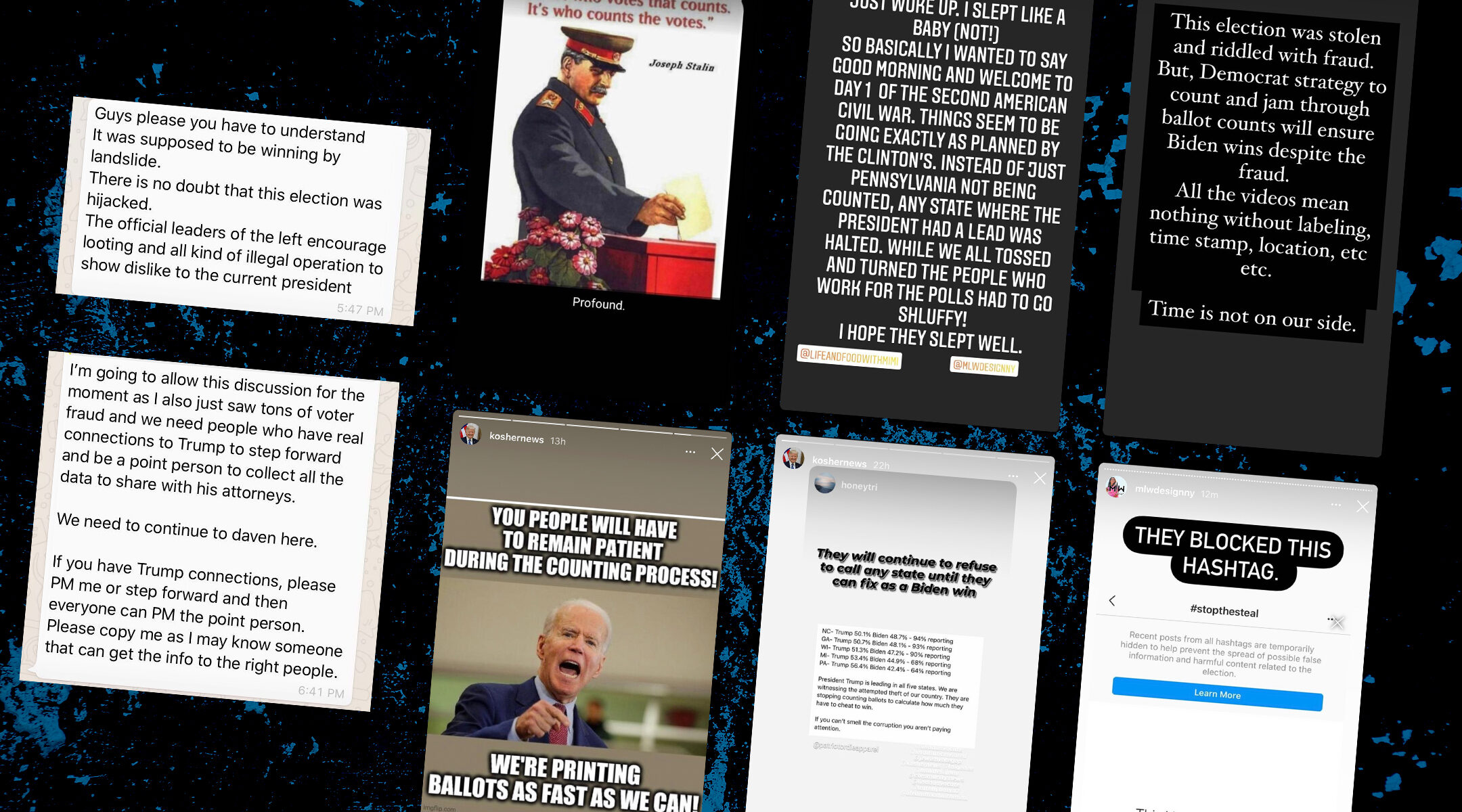 Messages casting doubt on the integrity of the 2020 presidential election spread on social media, even after the race was called for Joe Biden. (Screenshots from WhatsApp and Instagram)
Advertisement

(JTA) — The messages casting doubt on the election results started circulating among Orthodox Jewish social media accounts by Wednesday morning and continued throughout the weekend, pausing only for Shabbat.

“There’s a lot of cheating happening,” lifeandfoodwithmimi, an Instagram influencer who posts about food and politics and has over 16,000 followers, posted Wednesday night. “To me Trump won.”

“Profound,” one Instagram influencer, Victoria Zirkiev, who has nearly 25,000 followers, wrote in her story over a photo of Joseph Stalin casting a ballot. A quote falsely attributed to Stalin was written on the photo: “It’s not who votes that counts. It’s who counts the votes.”

Michal Weinstein, an event planner and influencer with over 20,000 Instagram followers, claimed Wednesday on Facebook that the Democrats had cheated. Weinstein quoted from her speech at a rally she organized last month in support of President Donald Trump and religious freedom in the Five Towns, a large Orthodox community on Long Island.

“Last week I spoke at the Freedom Rally and said the following: Trump will win. They will cheat. I’m not a sage. A psychic. A political genius. I’m simply very awake and informed,” she wrote.

Weinstein would add: “This is nothing but an attempt of a coup d’etat.”

In an interview with the Jewish Telegraphic Agency, Weinstein said she would accept the election results if the vote counting had been conducted fairly. But arguing that the results needed to be investigated, she pointed to claims of dead people voting and ballots marked for Trump being thrown out by postal workers. (Neither of the claims, which are circulating widely, has been substantiated.)

“Whatever I’m doing is attempting to spread truth, and the truth is that this is a coup, this election was stolen,” she said Monday.

The social media posts and the beliefs they reflect point to the growing influence of the far-right media on the Orthodox community, which in recent years has become increasingly right wing in its politics and was the only Jewish denomination in which a majority was expected to vote for Trump.

As the nation waited for the result of one of the most contentious presidential elections in modern history, and as ballot counting in Pennsylvania showed Joe Biden as the projected winner there to give him enough electoral votes for victory, the Orthodox social media continued to flood with posts casting doubt on the reliability of the results. The messages circulated on WhatsApp, a popular messaging app among Orthodox Jews, and on Instagram, where some influencers serve up a side of right-wing politics alongside their sharing of recipes and product recommendations that fit into an Orthodox lifestyle.

Across the platforms, the message from Jewish pro-Trump influencers was clear: The election results were not to be trusted.

No matter that there is no evidence of election fraud. (Republicans have claimed that there were election irregularities in five states where Biden led in the vote tallies. So far, The Washington Post reports, none have been proven.) Or that results were expected to take longer this year due to the large number of absentee ballots. Or that one of the reasons it took so long to count absentee ballots was that several states with Republican-controlled state governments did not allow absentee ballots to be counted before Election Day.

Messages questioning the integrity of the election weren’t confined to Orthodox Instagram influencers.

Dov Hikind, a former state assemblyman who represented Borough Park, a heavily Hasidic neighborhood in Brooklyn, for more than 30 years, did much the same on Twitter after Election Day.

“Almost every ‘irregularity’ that pops up favors Democrats,” he wrote in a tweet after a list of purported incidents of voter fraud. “Do the math!”

Alex Rapaport, a resident of Brooklyn’s Borough Park neighborhood who runs Masbia, a kosher soup kitchen, said part of the disinformation problem in the Orthodox community can be ascribed to the way information spreads among Orthodox Jews on social media.

“Some stems from the peer-to-peer nature of how information travels, where if something goes on WhatsApp, it doesn’t have a source,” he said.

But Rapaport also placed blame on the Orthodox news sites, which he said offered a different narrative about Trump’s presidency than mainstream news organizations over the past four years.

“This is not only on election stories, this is the entire four years where, when children were separated from their parents, which is something almost all of our grandparents endured, why wasn’t that a big story?” he asked, referring to migrants from South America. “There was very little play, it got very little coverage.”

Weinstein told JTA that she got much of her news from her Instagram followers and WhatsApp groups.

“It’s like I have soldiers all over,” she said. “I don’t share everything I receive because some of them seem outrageous. And some of them really make sense.”

Weinstein said she has experienced what she called censorship on Instagram, including shadowbanning, where an account’s followers do not see their posts as easily unless they specifically search for the account by name. (Instagram is owned by Facebook, which took steps to stop the spread of misinformation related to the election, including removing posts that cast doubt on its integrity.)

She later added: “When you’re so woke and you stop believing the media, then you understand that whatever you’re seeing on CNN, even Fox, is lies. It’s all a mirage and it’s gaslighting.”

Weinstein is so concerned about being able to share her beliefs about the election and other issues that she recently joined Parler, a platform intended to replace Twitter that is popular among conservatives.

Vote tallies from Pennsylvania led a number of news outlets to call the race for Biden on Saturday morning. But as Trump and his allies continued to question the election results, influencers signing on after Shabbat resumed their posts.

“They’re not the ones who decide who the president is,” one Instagram personality with the handle lindaadvocate and nearly 23,000 followers said Saturday night about the news organizations that called the race. “We have to check all the legal ballots to see who really was elected by the American people.”

“I will also be donating to the Trump campaign to help fight this,” she said in her story. “Buckle up, it’s going to be a crazy next couple of weeks, months.”