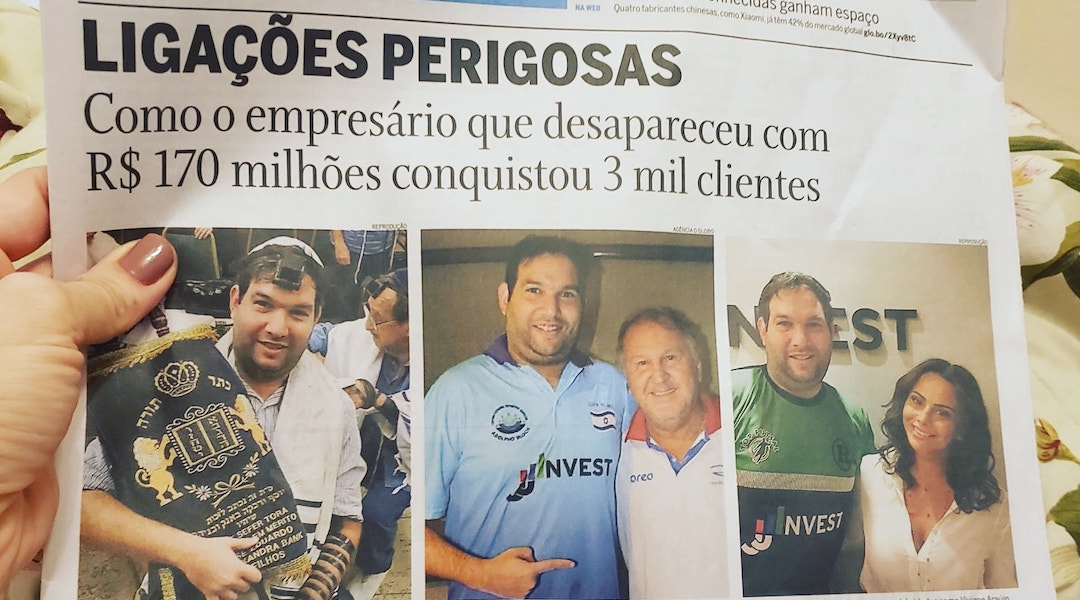 An article in O Globo, one of Brazil's largest newspapers, on Jonas Jaimovick. (WhatsApp)
Advertisement

RIO DE JANEIRO (JTA) — A Brazilian Jewish businessman accused of bilking investors out of tens of millions of dollars, earning comparisons to Bernie Madoff, was arrested in Rio de Janeiro after more than a year in hiding.

Jonas Jaimovick, who turned himself in to Rio Police on Monday, had made headlines for disappearing with an estimated $32 million in what is being called the South American country’s largest-ever pyramid scheme.

Jaimovick, 39, who owns the investment firm JJ Invest, had launched the alleged illegal enterprise in the Jewish community after ingratiating himself there by sponsoring and promoting several projects in synagogues, clubs, schools and elsewhere. His clients – some 3,000, according to reports — include celebrities and well-known athletes who believed his promises of high earnings.

“As a member of the Jewish community of Rio de Janeiro and chairman of the human rights commission of the city council, I would like to ask to avoid the use of Jewish symbols connected to the owner of JJ Invest,” she wrote.

Bergher said that showing Jaimovick holding the Torah, “the greatest symbol of the Jewish religion,” could “generate confusion and even a wave of anti-Semitism.”

Starting his alleged scheme in mid-2016 in the Jewish community – he would share pictures of officials, rabbis and friends on social media — Jaimovick quickly expanded beyond those circles. Passionate about soccer, the man typically referred to by his initials, JJ, sponsored several teams and brought on current and former players as clients. His photos with soccer stars and media celebrities would go viral on social media and helped multiply his business.

There are numerous lawsuits seeking reimbursement from Jaimovick and JJ Invest, according to Rio Police, the UOL news portal reported.

“With his arrest, the search for the biggest pyramid operator in the country comes to an end,” the police said in a statement.

Jaimovick has been charged with fraud, among other crimes, and could be sentenced to as much as 22 years in prison.

Jaimovick grew up in Rio’s 30,000-strong Jewish community, attending school and participating in clubs and a youth movement. His wealthy family’s assets disappeared with the death of his father in 2012 and problems in the family transportation company, the O Globo newspaper reported.

In early 2019, the media reported that Jaimovick was being investigated, leading to widespread attempts by JJ Invest customers for the return of their money. But Jaimovick’s whereabouts remained unknown and investor attempts for redemption have proven unsuccessful. Reports said that he was hiding in the Barra neighborhood of Rio before turning himself in.

His passports were seized and his wife was prevented from traveling to Israel with the couple’s child minutes before boarding the plane.

“Jonas broke trust, destroyed lives, affected a community with more than 100,000 members and stained images,” said one of the victims who spoke to O Globo in anonymity last year, claiming to have developed depression, anxiety and heart disease.