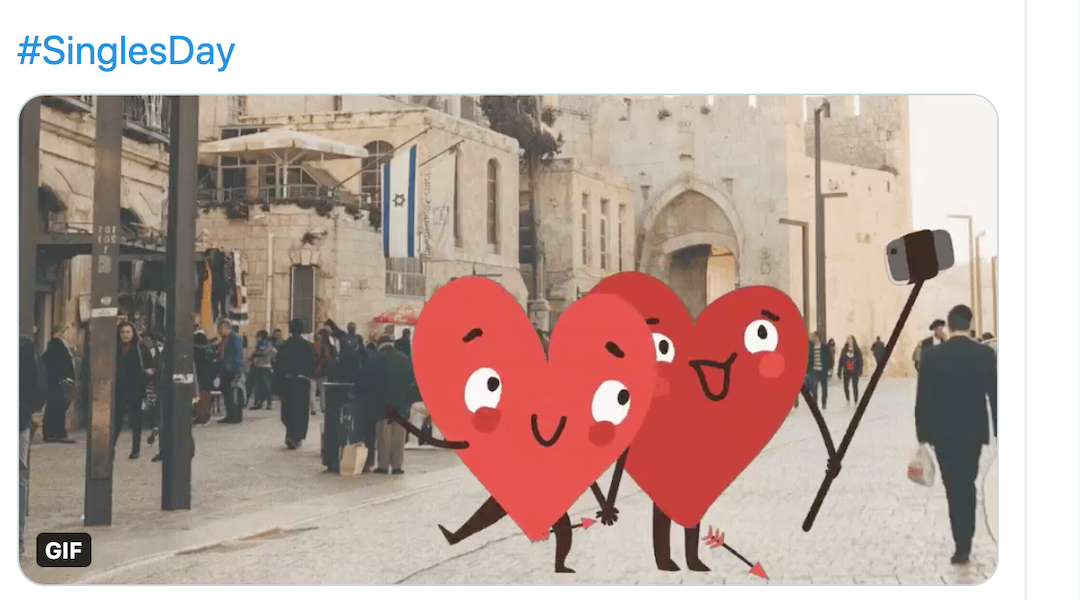 JERUSALEM (JTA) — Israel’s Foreign Ministry took on the role of the “shadchan,” or traditional Jewish matchmaker, on Wednesday, offering to help set up social media users in honor of Singles Day.

Posting on the official @Israel Twitter account, the ministry reached out to singles and “Jewish mothers everywhere,” urging people to post their age, location and hobbies, and promising to retweet the information to its more than 665,000 followers in order to help them “find that special someone to bring home for the holidays.”

Hey singles (& #Jewish mothers everywhere), we're here to help you find that special someone to bring home for the holidays (because 2020 has been rough enough).

The @Israel account started things off, stating that it was 72 years old, its gender was “neutral” and that it enjoyed “long walks on the beach, archeology, anything tech related & @FaudaOfficial” — a reference to the popular Israeli TV series.

Singles Day, an unofficial festival started in China in the early 1990s to celebrate the romantically uninvolved, has evolved in recent years into a social media sensation and a major commercial holiday rivaling Black Friday.

Retweeting one single follower from Germany, the ministry asserted that Israel was “the perfect honeymoon destination,” prompting another user to comment that he would “invite my ex-wife for the Honeymoon we never had to Haifa.”

“You sure you want to do that?” the ministry replied.

“Jewish mother here with a gorgeous 26 year old daughter, above all no meshugenas please,” another user retweeted by the ministry wrote, using the Yiddish term for crazy person in a nod to the hit-or-miss nature of online dating.

Jewish mother here with a gorgeous 26 year old daughter, above all no meshugenas please…

Responding to the Israeli tweet, Matthew Kupfer, news editor of the Kyiv Post newspaper in Ukraine, quipped that while “@Ukraine has a very creative Twitter account,” he couldn’t “see them doing this for the Ukrainian diaspora.”

The Ukrainian government’s official @Ukraine account actually responded to its Israeli counterpart, however, giving its age as “29 (actually much older but don’t tell anyone),” its location as Central Europe and its hobbies as “good food, rave parties [and] coding.”

29 (actually much older but don’t tell anyone)

Tamar Schwarzbard, the Israeli ministry’s head of new media, explained in a telephone interview with the Jewish Telegraphic Agency that her goal was to reach “as many people as possible,” and “if that means connecting to internet trends and appealing to a younger generation that spends most of its time online, we adapt to that role.”

“I saw it posted all over the place, and especially in this climate people want to relax a little online and want some positive posts on their feed, and this is a great way we can help the entire world and help people find love,” she said. “A lot of people are posting information, and obviously with the Jewish maternal role we have in Israel, we are looking at different tweets and retweeting people to help find their match and hoping for the best.”

Even the most innocuous tweets can be contentious when it comes to the Middle East, however, and numerous users tweeted comments highly critical of Israel, many of them relating to the ongoing conflict with the Palestinians.

One IDF tweet, which was retweeted nearly 900 times, contained a video riffing on Facebook’s auto-generated Happy Birthday messages. In the IDF version, members of several terrorist groups wish Qasem Soleimani, the head of Iran’s Quds Force who was assassinated earlier this year, many happy returns. At the end of the clip, the cake explodes.