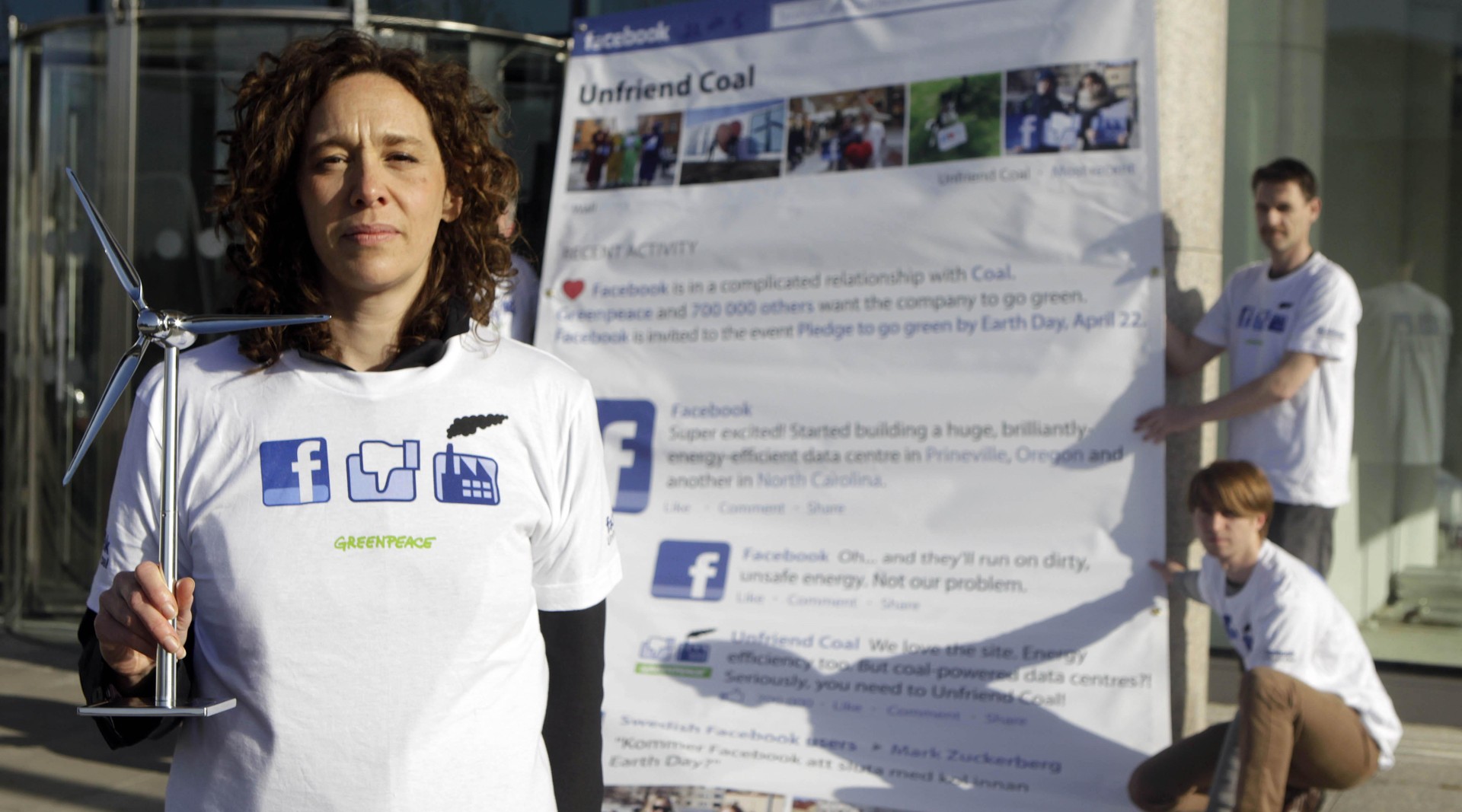 Climate activist Tzeporah Berman leads Irish Greenpeace volunteers in a protest outside Facebook's Dublin office calling on them to change the type of energy they use. (Niall Carson/PA Images via Getty Images)
Advertisement

(JTA) — Tzeporah Berman did not set out to be an environmental activist.

Raised in a Jewish family outside Toronto, she dreamed of becoming a fashion designer and after high school moved into the city to enroll in a fashion arts design program at Ryerson University.

Fast forward three decades and Berman, 51, is one of Canada’s leading environmental activists. She is credited with helping protect some 100 million acres of old-growth forests and helped get Facebook to adopt renewable energy to power its data centers as part of a campaign against fossil fuel consumption. She also makes energy-related recommendations for Canadian government task forces.

In 2019, she was awarded the Climate Breakthrough Project Award, the environmental equivalent of the Nobel Prize. She has been hailed in a permanent exhibit at the BC Royal Museum as one of 150 people who have changed the face of British Columbia.

Berman’s environmental activism was awakened in the summer of 1991, on a trip to explore the rainforests near Vancouver between her freshman and sophomore years of college.

“I was a naive 23-year-old girl. I bought a pair of hiking shoes and spent the rest of my money on a backpack and a plane ticket, then set out to explore the Canadian rainforests,” Berman recalled.

She arrived in Vancouver not knowing anybody, stayed at a youth hostel and searched the Yellow Pages for groups of environmental activists. She found the Western Canada Wilderness Committee, dropped by their offices and introduced herself. They took her to their research camp on the west coast of Vancouver Island, where Berman helped cut trails and cook.

“I was a good Jewish girl, so I knew how to cook,” Berman said. “I didn’t really know anything else.”

Excited by her experience, she made plans to go back the next summer. But when she returned, she was astonished to find that the trees in she had researched had been cut down by loggers.

“Hundreds of a thousand-year-old trees simply disappeared from a vast area,” Berman said. “I heard the vultures above screeching in pain as they searched for their nests, and I just felt this terrible despair.”

When a group of people passed through the area to support residents who had set up a blockade against deforestation, Berman joined them. It was her first time ever at a demonstration.

The protests at Clayoquot Sound, an area along the Pacific coast of Vancouver Island made up of islands, peninsulas and lakes and which had one of the biggest rainforests in the country, continued throughout the following year. When Canada’s government decided in mid-1993 to allow deforestation in most of the area, Berman returned.

“On the first day, when the police arrived, we had no one delivering any speeches,” she said. “Someone from the community gave me the megaphone and asked me to explain to everyone else what’s supposed to happen at the demonstration, so I just climbed onto the roof of the van, took the megaphone and started talking – and seems like I haven’t stopped since.”

That early fight in the mid-90s to protect the rainforests in British Columbia was transformative not just for Berman, but for Canada. Demonstrations lasted for months, becoming a de facto blockade of logging. Some 800 protesters were arrested. Their actions generated headlines across Canada.

Very quickly, public sentiment turned against the idea of destroying the area’s forests to make money. The protests led to a series of agreements that stipulated which trees would be cut down and how, how forest regeneration would be supported, and how the local economy would be boosted to help the mostly poor and indigenous local population. Berman was one of the lead negotiators of what became known as the Great Bear Rainforest agreement and the Canadian Boreal Forest Initiative.

Berman grew up in what she describes as a devout Jewish home in London, Ontario, not far from Toronto. Her mother was the president of the local Hadassah chapter, and her father was the president of the local B’nai B’rith. The family went to synagogue every Saturday and Berman went to a Jewish school three times a week. Berman was very active in United Synagogue Youth, the Conservative movement’s youth organization. She worked after high school at the local Jewish community center.

The family also traveled together to Israel, which Berman says was central to their lives. Today, Berman’s relationship with Israel is more complex.

“When I was young, Israel was our refuge, so to speak, but today my attitude toward the country is a little more complex. I think more work is needed to address injustices, on all sides,” she said. Yet, “as a Jew I also feel very lucky to have this connection to Israel, with all the history of anti-Semitism and persecution. Today we are witnessing an increase in anti-Semitism and hatred across the United States, under the Trump administration, and that reminds me why it is so important that as Jews we have a vision and a place of our own.”

Because of her concern for the environment, Berman does not fly on airplanes unless she must do so for work, so she hasn’t been to Israel since she was 16. Berman lives in Western Canada with her spouse and two children. She works as the international program director at the environmental group Stand.Earth, teaches environmental studies at York University and serves as a consultant for a number of Canadian First Nations.

After her initial success in the Clayoquot Sound protests, Berman moved on to a campaign to save the rainforests in another Pacific coastal area called Great Bear, where logging continued unchecked.

Berman sent information about deforestation to the corporate consumers of those trees — companies like Home Depot, Office Depot, Staples, Lowe’s and publishers of various magazines. Some of their products were being manufactured from 800-year-old trees and destroying the lands of poor, indigenous people, Berman argued. Often, the companies were surprised to learn this information, and canceled their contracts with the wood companies, according to Berman. The campaign moved Berman from the tree-cutting centers to the executive rooms, where the real power lay.

In 2000, Berman co-founded ForestEthics, which was devoted to convincing companies to change their way (or threatening them with loss of sales if they wouldn’t).

The next target of Berman’s efforts became the company she determined was Canada’s biggest consumer of paper made from old-growth trees: Victoria’s Secret, which printed millions of catalogues made with paper from Canadian timber. The lingerie company was not responsive to Berman. So she decided to focus on Victoria’s Secret’s customers.

“We started organizing student demonstrations near Victoria’s Secret stores. There were many students eager to wear underwear and hold paper saws on Main Street,” she said.

The campaign included hundreds of demonstrations and full-page ad in The New York Times featuring a woman wearing Victoria’s Secret lingerie and holding a saw with a caption reading, “Victoria has a dirty secret.”

Soon, the company made an abrupt change. They canceled their pulp mill contract and joined with Berman’s group in demanding that the Canadian government take action to protect endangered Canadian trees.

“This whole thing sent a shock wave through the industry, and caused a large increase in demand for regulated products,” Berman said. “Thanks to this campaign, we brought about a change in the way paper is produced in North America. I would say it is one of the moments I am most proud of in my career.”

With each activist success, Berman gained greater renown. She was appointed to more than a dozen Canadian and international advisory committees on climate and environmental issues. She was interviewed in Leonardo DiCaprio’s 2007 environmental documentary, “The 11th Hour.”

Berman’s focus widened to climate change, and as co-director Greenpeace International’s Climate and Energy program, Berman brought her activist tactics to the fight against energy consumption. She quickly zeroed in on the big tech companies, which need a tremendous amount of energy to run their server centers.

When she contacted Facebook, company executives claimed their sources were green, but Berman discovered that most of the company’s energy came from coal consumption. To get Facebook’s attention, she targeted their employees.

“Facebook employees are progressive; they believe in climate change and want to be green,” Berman said. “We ran our campaign on Facebook itself, and I think it affected them psychologically. The logo for the campaign was a thumbs down, with a picture of a small coal factory in front of a raised thumb and a picture of a windmill. As simple as possible. The headline was: ‘I love Facebook. I wish they were green.’”

“The campaign not only reversed the decision of the social network, it also changed the policies of countries that wanted Facebook to build its headquarters on their territory, as well as companies similar to Facebook, such as Google and Twitter,” Berman said. “They even started competing among themselves – who would use more renewable energy, who would develop better policies. I think the campaign has led to a demand for renewable energy, and it has also moved the red line for many corporations in terms of their attitude to climate change.”

After Berman was awarded the Climate Breakthrough Project award in 2019, she used her prize money to fund global campaigns against polluting fossil fuels, which contribute to global warming.

“With the money I received, I built a coalition of lawyers, diplomats, academics and activists from all over the world,” Berman said. “Just as the world united around the notion that nuclear weapons were a global threat, it is time for the world to unite and recognize that the proliferation and accumulation of fossil fuels is also a global threat. No country can do this alone.”

Berman has been meeting with governments around the world and encouraging cities and individuals to commit to meaningful fossil fuel reduction.

“This is not an environmental or economic issue, this is an issue of human rights and the future of our children,” Berman said. “The Torah says that we are all Earth keepers, and from the Midrash it is clear that we are guardians of the world, not its owners. Our sacred responsibility is not only to protect but also to fix the world. Every person should scrutinize their actions at this moment in history.”

The clock is ticking, Berman says, estimating that only 10 more years remain to take action sufficient to avoid a future in which climate change throws the world into chaos.

In that scenario, she said, “we will experience loss of food sources, loss of crops, floods, fires – on a much larger scale than now. Most river estuaries in Southeast Asia, and elsewhere in the world, where the largest concentration of humans lives today, will be totally flooded, resulting in a massive migration of millions of people in times of crisis. That is one of my biggest fears, and the responsibility is all ours.”

This article is part of a joint project of Onlife, the Gesher Leadership Institute and JTA, featuring some of the most influential Jewish women from around the world. Hadas Ragolsky Chrissy, editor of Onlife, is an Israeli journalist.