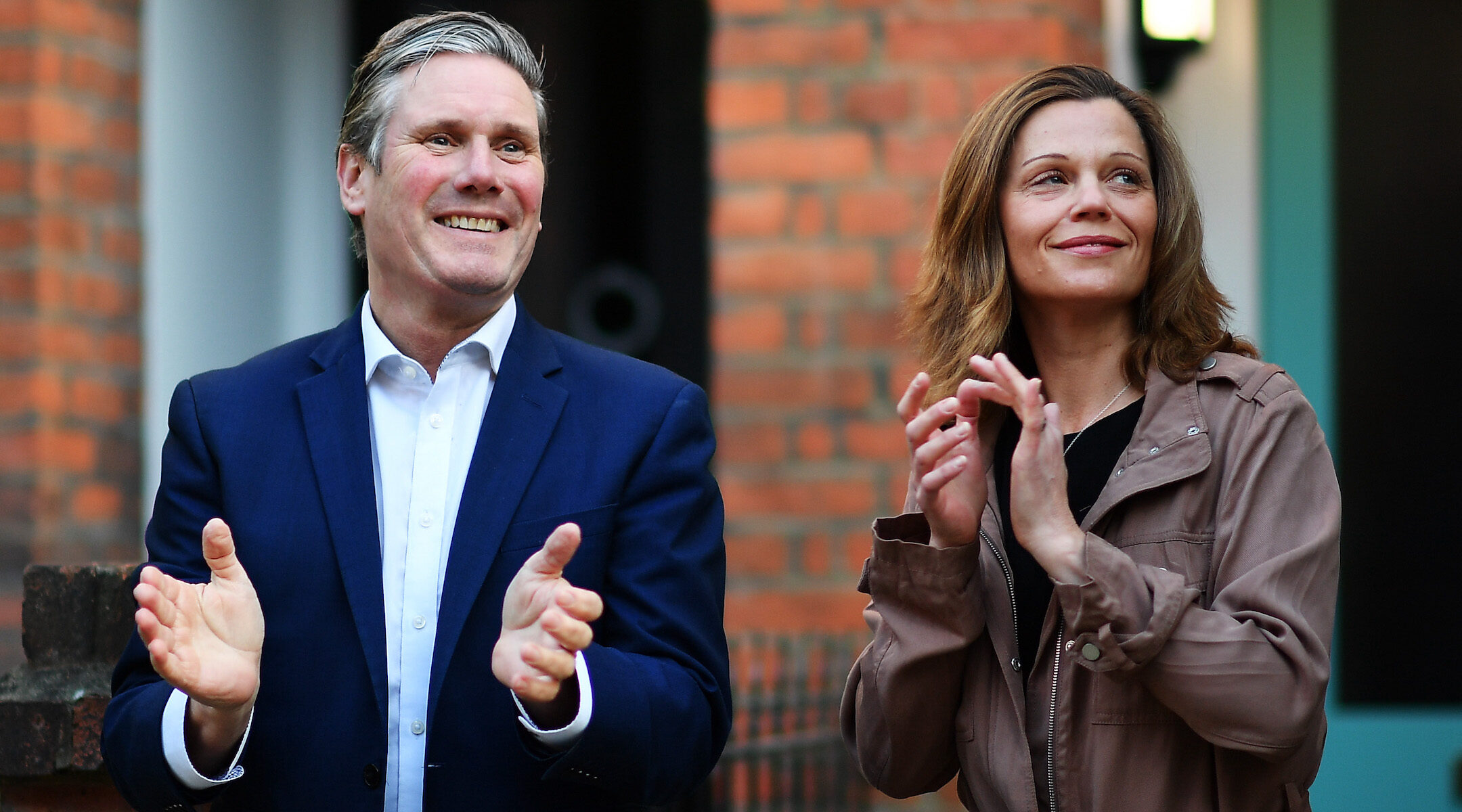 (JTA) — In an interview for the Limmud Jewish learning festival in the United Kingdom, Keir Starmer, the leader of the Labour Party, spoke about expected political topics, such as the party’s actions on stamping out anti-Semitism in the wake of Jeremy Corbyn’s controversial tenure as leader.

But Starmer also opened up on a topic he hasn’t shared much about: how he and his Jewish wife are raising his children to recognize their Jewish faith.

Starmer, who succeeded Jeremy Corbyn earlier this year, said Monday that he was “brought up Church of England, loosely, and my wife’s family are Jewish, they came out from Poland.”

Starmer, 58, and his wife, attorney Victoria Alexander, have two children, whom they are “bringing up to recognize the faith of part of their grandfather’s family, and it’s very important,” he said. “Just carving out that tradition, that bit of faith on Friday is incredibly important, because we get together and we do Zoom prayers now.”

The family belong to London’s Liberal Jewish Synagogue, which is situated in the St. John’s Wood neighborhood and belongs to the Liberal movement, the more progressive of British Jewry’s two liberal strains, which includes Reform. Starmer has hinted before that Alexander’s family comes over for Friday night dinners at their London house.

Alexander’s mother, who had converted to Judaism, died earlier this year.

“It’s been a terrible year for my wife and her family,” Starmer told Limmud.

Her father, who was born Jewish and has roots in Poland, lives on the same street as Starmer and his family, he said.

On the call, Starmer reiterated his criticism of how Jeremy Corbyn, a far-left politician who has called Hezbollah and Hamas his friends and supported a blanket boycott of Israel, handled the proliferation of anti-Semitic hate speech in the party’s ranks under his four years as Labour leader.

Starmer has tried to turn the page, apologizing for Corbyn’s perceived failure to tackle anti-Semitism and briefly suspending Corbyn from the party after he downplayed parts of a damning report on Labour anti-Semitism by the Equality and Human Rights Commission, the British government’s watchdog on racism.

“I can’t tell you how disappointed I was that morning and the response of Jeremy to the report,” Starmer said to Limmud. “It fundamentally cuts across all of that work that I had put in trying to make sure that we could do the right thing by that report.”

“I think we can make up for lost ground,” he added.

Asked about Israel’s plan last year to annex parts of the West Bank, Starmer said he opposed that plan but that he does not support boycotting West Bank products in response to it, as some have suggested the United Kingdom should do.