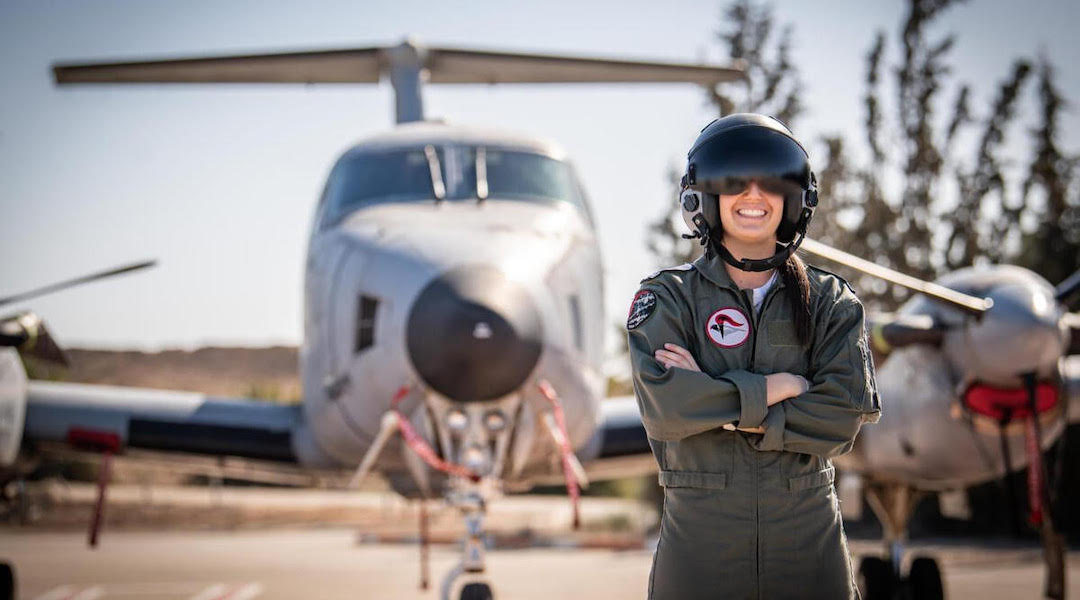 A 21-year-old, whose name has not been released by Israeli censors, is Israel's first female American air force pilot. (Israel Air Force)
Advertisement

JERUSALEM (JTA) — A 21-year-old from Boston who shelved thoughts of a medical career in the United States is the first female American Israeli Air Force pilot.

Lt. O, whose father was a longtime IAF veteran, was among 39 candidates in a class of 500 to make the grade. She was also one of only two female pilots to complete the grueling three-year course. (Israel’s military censors will not allow her last name to be published.)

“I’m really ecstatic,” Lt. O said of her graduation. “It took a while until I could feel all the excitement. As soon as my family landed I felt it. Until then I had a bunch of tests and flights.”

Lt. O, an Israel native who was raised in the United States, was trained to fly a Boeing 707. She will take on a role that consists of aerial refueling operations and hauling cargo, including medical supplies needed to combat the COVID-19 pandemic.

She follows in the footsteps of her father, Boaz, who was an IAF navigator for 22 years before moving to the United States. Her mother, Naomi, also has an aviation connection: She worked as a Delta flight attendant for several years following her service as an IDF communications officer. Naomi now works for the charitable group Friends of the Israel Defense Forces, which provides services to lone soldiers.

Her older sister is in Israel and plans special forces operations for its Navy.

For Naomi, O’s service was especially challenging during the pandemic, which effectively cut off any possibility of her daughter returning to visit.

“We didn’t see her for more than 18 months in a row,” Naomi said. “Luckily she had her sister, who is also a lone soldier there, who did her best to help her.”

Describing the process of serving as a lone soldier, Lt. O said that she had it “much easier than other lone soldiers” because she already spoke Hebrew and was familiar with Israeli culture, but that the training was still “the most challenging thing” she had ever done. And while her Israeli upbringing stateside was an asset, joining the military was still a significant “culture shock.”

Asked if she sees herself as a role model, Lt. O said that she hopes that she can help use her platform to inspire others. She said it is “a little upsetting” that there are not more women and lone soldiers in her position.

Lt. O initially planned on studying medicine stateside before deciding to move back to Israel and enlist in the IAF.

It was, she told the Jewish Telegraphic Agency on a phone call, “definitely the right decision.”