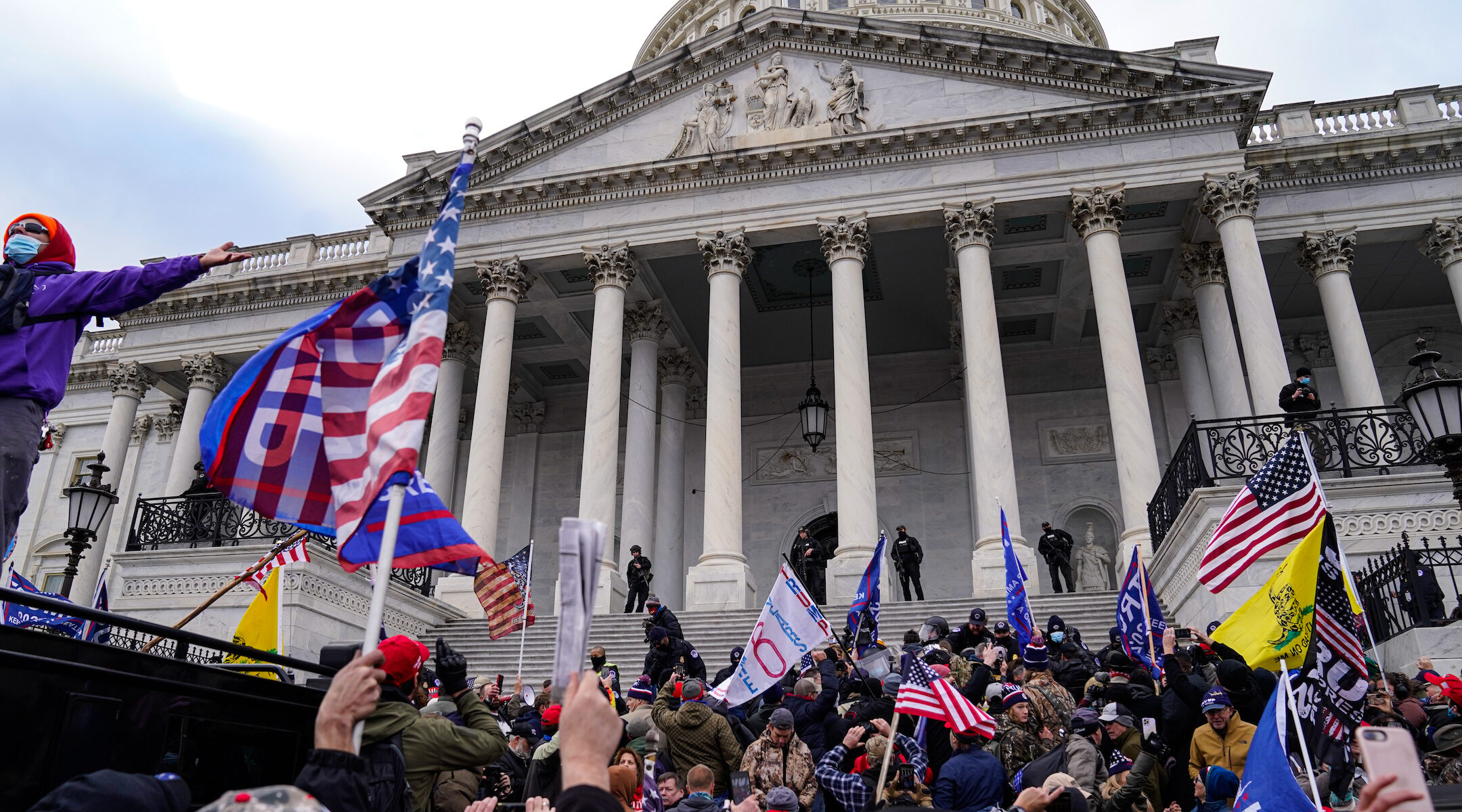 A view of the crowds outside the U.S. Capitol for the "Stop the Steal" rally on Jan. 6, 2021 that led to violence. (Robert Nickelsberg/Getty Images)
Advertisement

(JTA) — Ruth Friedman could tell that Wednesday’s pro-Trump protests in Washington, D.C., might be volatile when she boarded a plane home to the nation’s capital from her grandmother’s funeral on Tuesday.

The flight was full of people in MAGA gear on their way to Washington to protest the results of the presidential election, as President Donald Trump had urged them. As the plane landed, she recalled, one man shouted “Who’s here to support President Trump?” Others cheered and chanted “USA! USA!”

“I felt pretty freaked out because I’m Jewish,” said Friedman, who helps lead Ohev Sholom-The National Synagogue in Washington, an Orthodox congregation, as a Maharat, a term used for some female Orthodox spiritual leaders. “I really just tried to keep my head down. I really was genuinely afraid to engage.”

But by Wednesday afternoon, Friedman said she recognized that her congregants would need her to grapple with the violent protests during which Trump supporters stormed the Capitol building. She just hadn’t yet figured out how.

“My only real message right now is prayers for safety. I think it’s too early for me to know what an actual message [to congregants] would be because this is so representative of so many problems on so many different levels,” Friedman said. “So I would just like to focus on the immediate, we are praying for safety, and not try to have a grander message right now.”

Rabbis and other Jewish spiritual leaders in Washington and beyond took a range of approaches on Wednesday to help their communities come to terms with the scenes they saw playing out on their TVs. Some rabbis recorded brief video messages to convey a sense of hope — and to confirm that they were safe — while others attempted to organize impromptu events for congregants. T’ruah: The Rabbinic Call for Human Rights, a liberal rabbinic group, put together a structured event of song, Torah commentary and political dialogue that gathered over 500 people on Zoom.

Friedman’s colleague, Rabbi Shmuel Herzfeld, sent psalms to worried congregants who reached out to him throughout the day, tailored to their specific concerns.

“We try and see what peoples’ anxieties are and apply the proper psalm for that situation,” he said. “There’s a lot of anxiety in our country right now, and so people are looking to our tradition for meaning and for guidance.”

The disorientation was pronounced throughout D.C., where Mayor Muriel Bowser imposed a curfew from 6 p.m. until 6 a.m. Friday. The city’s Kesher Israel Orthodox synagogue canceled its nightly service, which has been held outdoors throughout the coronavirus pandemic, even as Rabbi Hyim Shafner said things felt normal in the Georgetown neighborhood where his synagogue is located, and in the Foggy Bottom and Dupont Circle neighborhoods where many of his congregation members live.

“The coffee shops were occupied and people were shopping. It’s less than a mile from the White House but it’s a different world,” he said.

Still, he couldn’t let the day go by without communicating with his congregation. In an email to synagogue members, he noted how the week’s Torah portion — about how the Egyptian Pharoah enslaved Jews after feeling that they were growing too powerful — connected to the moment.

In an interview, he said his faith in the safety of the country, particularly for Jews, was rattled.

“I’m watching the Capitol and people are smashing the windows, climbing in and sitting in the seats of the Senate … with their feet up on the desk. There’s something incredibly disquieting about that, as I’m sure it was for many Americans,” he said. “But I think as a Jew we have to also see that in another light and say, ‘Oh, maybe the sands under our feet are not as solid as we always assume them to be.’”

Other local Jews worried about the immediate safety of their rabbis and synagogue buildings. Rabbis Aaron Alexander and Lauren Holtzblatt of the city’s Adas Israel Congregation rushed to go live on Facebook at 5 p.m., after footage of protesters flipping over tables and breaking windows had widely circulated on social media.

“Unfortunately, we’ve done a number of these livecasts over the past 10 months,” Holtzblatt told the hundreds of people watching, many of them Jews concerned about violence spreading.

“Our first reaction was to go live immediately,” Alexander told the Jewish Telegraphic Agency over the phone, “so people can not only read our words but can see our faces.” He noted that many have reached out to him to check on the synagogue building, which remains safe and empty but is being continually monitored.

“We’re all sort of holding our breath,” Alexander said. “Some [rioters] will be leaving the city, some people will refuse to leave the Capitol area and some people will go back to their hotels.”

In an email to JTA, Holtzblatt said her community was “very concerned” about what happened at the Capitol and noted that she is praying for a peaceful transfer of power.

Other rabbis sounded similar notes. Temple in Falls Church, Virginia, just outside of the city, held a virtual “gathering for democracy.” During the T’ruah event, titled “Standing Up for Democracy: A Gathering for Prayer & Action,” Rabbi Sharon Brous of IKAR in Los Angeles offered a stinging rebuke of Trump, Sen. Majority Leader Mitch McConnell and white supremacists whom she said have “been taught that God loves them more.”

The Conservative movement’s Rabbinical Assembly released a statement calling on “all American political and religious leaders” to condemn the day’s events. The Reform movement’s Central Conference of American Rabbis released a prayer for peace.

From his synagogue in Washington, Shafner, an Orthodox rabbi, said he felt like the American Jewish consciousness could shift as a result of the day’s events.

“We feel obviously very safe in America, I think we feel like America’s different, it’s a great democracy,” he said. “We have to also remember that we are visitors here in America. Is it really different? I don’t know. I hope it is. But these are the moments when I think there should be self-doubt.”