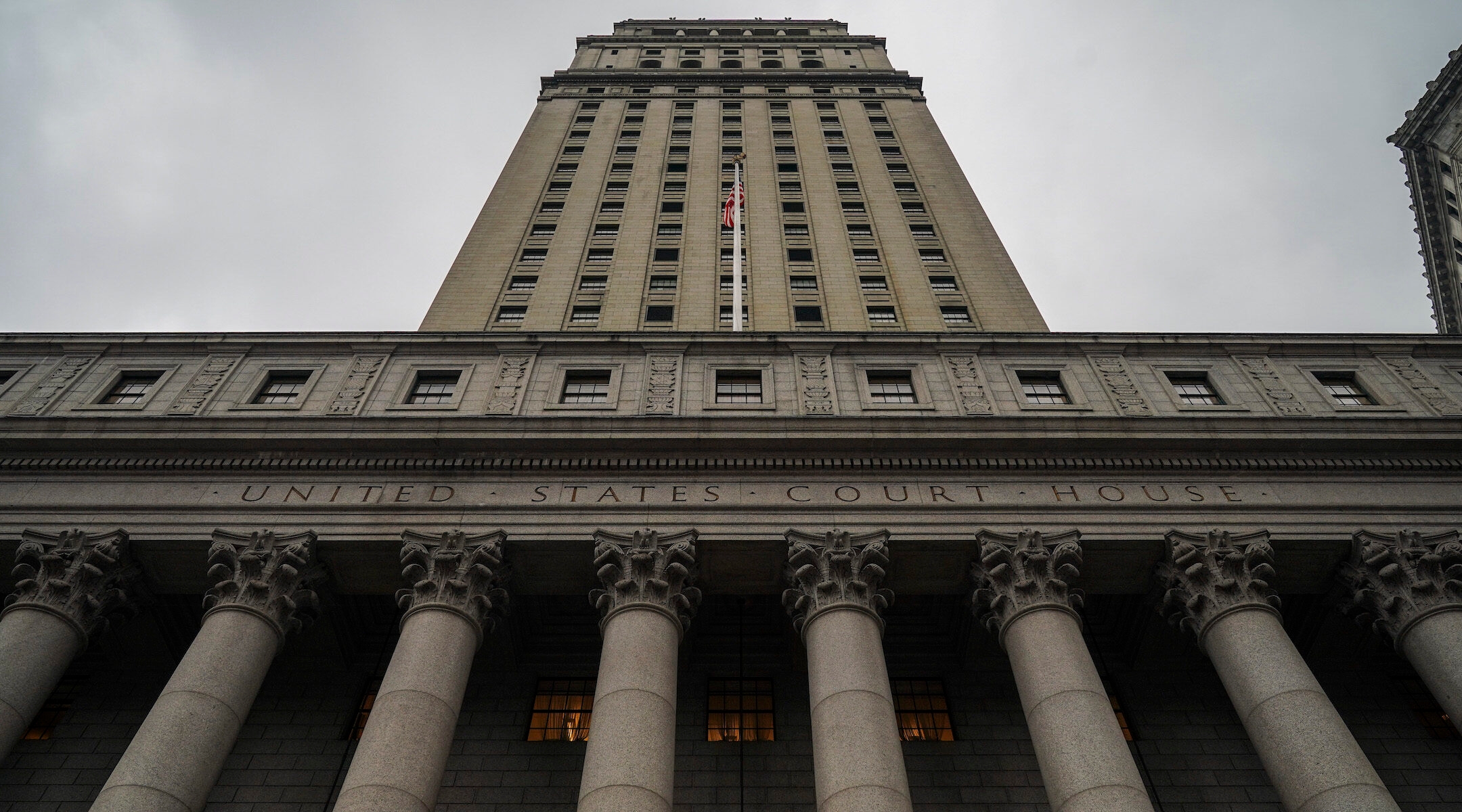 This federal courthouse in New York City is the venue for a case involving a Hasidic man who pleaded guilty to money laundering and could spend 11 to 14 years in prison. (Drew Angerer/Getty Images)
Advertisement

(JTA) — Advocates for improving secular studies in Hasidic yeshivas are getting an assist from an unlikely place: the federal case of a Hasidic man who has pleaded guilty to laundering drug money.

Zalman Zirkind of Montreal, but currently on house arrest in Brooklyn, is due to be sentenced Friday in U.S. District Court in New York. Last summer he pleaded guilty to charges that carry a possible sentence of 11 to 14 years in prison.

Supporters of Zirkind, also known as Zalmund, have submitted letters testifying to his character and asking for a lenient sentence.

Among the 24 letters submitted to the judge in the case was one from Abraham Boyarsky, a math professor at Concordia University in Montreal who said he has known Zirkind’s family for 40 years — and understands why Zirkind turned to crime.

Secular education is frowned upon in the Hasidic community, Boyarsky explained, but a combination of few job opportunities and the high cost of yeshiva tuition for large families can lead men into “financial and legal woes.”

“In desperation, they rely on a thwarted perception that justifies taking extreme risks in the false belief that supporting a family condones almost any action,” he wrote.

The letter adds fuel to an ongoing battle over whether yeshivas should face accountability for helping students become proficient in secular subjects.

After an advocacy group called Yaffed advanced complaints by dozens of graduates of New York City yeshivas who say they did not get an adequate secular education, the city opened an investigation into the schools, which are required by law to offer an education “substantially equivalent” to that offered in public schools.

Leaders in the haredi Orthodox community have pushed back, with some yeshivas keeping monitors out of the schools, and launching an advocacy group of their own called Pearls (Parents for Educational and Religious Liberty in Schools).

People aligned with Yaffed have faced consequences for criticizing yeshivas, including being labeled “mosers,” a term that often carries a threat of physical violence.

In his letter, Boyarsky said that he, too, had experienced consequences after founding TAV College in Montreal in 1989 with the goal of offering secular education to Hasidic Jews so they could obtain better job opportunities.

“For attempting to do the ‘unthinkable,’ I was called a traitor by the rabbinical leaders in the community and threatened with ‘cheirem,’ excommunication,” he wrote.

“I believe Zalman is a victim of an education system that I battled fiercely for decades,” Boyarsky wrote.

It’s not the first time that advocates for a Hasidic Jew convicted of a crime have pointed out a defendant’s minimal secular education as part of a bid to reduce a prison sentence. When Sholom Rubashkin, who ran a kosher slaughtering and meat-packing company, was convicted of financial fraud in 2010 and sentenced to an unusually severe 27 years in jail, his lawyer, Nathan Lewin, noted Rubashkin’s limited secular education in a brief in appealing the sentence.

“Sholom Rubashkin, one of Aaron’s nine children, received only a limited secular education, graduating from eighth-grade,” he wrote in the 2011 appellate brief by way of beginning a short history of Rubashkin’s life meant to persuade the judge to shorten his sentence.

Lewin, a well-known lawyer, has spoken out against state oversight of yeshivas.

To advocates of increasing math and reading instruction in yeshivas, Lewin’s appeal for Rubashkin and the letter on Zirkind’s behalf now represent evidence that community members know they are not helping children even as they argue that yeshivas should not be required to change.

“The community doesn’t want to live with the consequences of their education abuse,” said Yossi Newfield, who was one of 52 yeshiva graduates to sign the letter organized by Yaffed in 2015 that prompted an investigation into the city’s yeshivas.

He added: “You want this lack of education, don’t come crying to a judge pulling the wool over her saying you don’t have an education.”