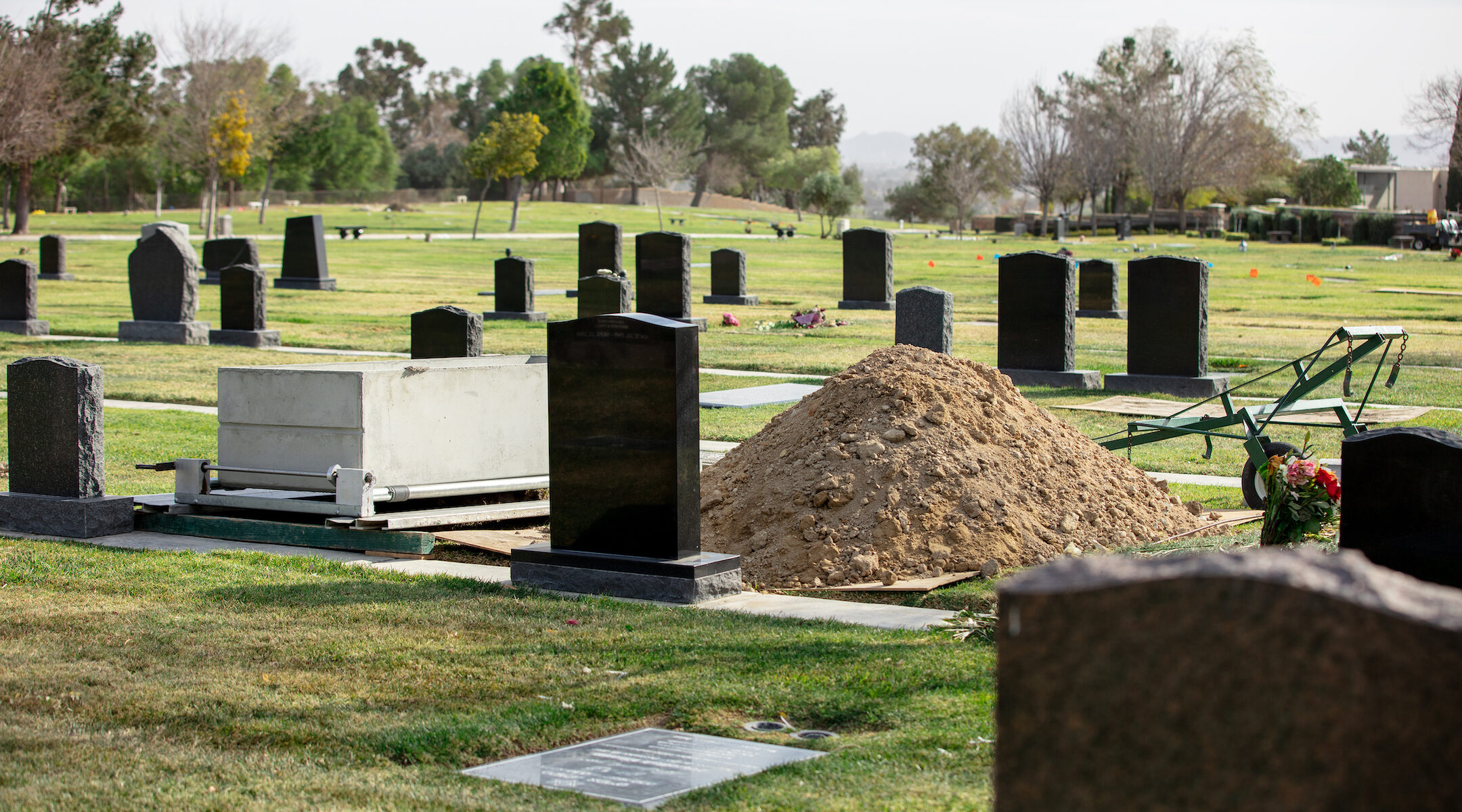 A view of some of the graves at the Groman Eden Mortuary in Eden Memorial Park in Mission Hills, Calif. (Anthony Lampe)
Advertisement

(JTA) — In Los Angeles, the Jewish funeral homes cannot keep up with the bodies.

Some family members are being forced to wait a week or even longer for burials. The city’s largest Jewish funeral home, Mount Sinai Memorial Parks and Mortuaries, rented a second 12-meter refrigerated truck last week to hold bodies with the one rented in March filled to capacity with 40 corpses.

In some cases, funerals are being delayed because overwhelmed doctors too busy caring for patients at inundated hospitals don’t have time to fill out death certificates and burial permits.

The culprit is the unprecedented COVID-19 surge in California, which this week became the first U.S. state to report more than 3 million coronavirus cases since the outbreak of the pandemic. One million of those cases have occurred in Los Angeles County, home to America’s second-largest Jewish community with about 500,000 souls. More than 14,000 people have died in Los Angeles and hospital intensive care units are filled to capacity.

“It’s overwhelming,” said Richard George, the funeral director at Home of Peace Memorial Park and Mortuary in Los Angeles. “All the Jewish mortuaries and cemeteries are experiencing the same thing.”

At a funeral home in West Hollywood, a man picked up the phone and said he was too busy to talk.

“It’s totally crazy here,” he explained before hanging up.

At Shalom Chapel, mortuary director Moe Goldsman answered the phone and immediately apologized for not having the time to talk. 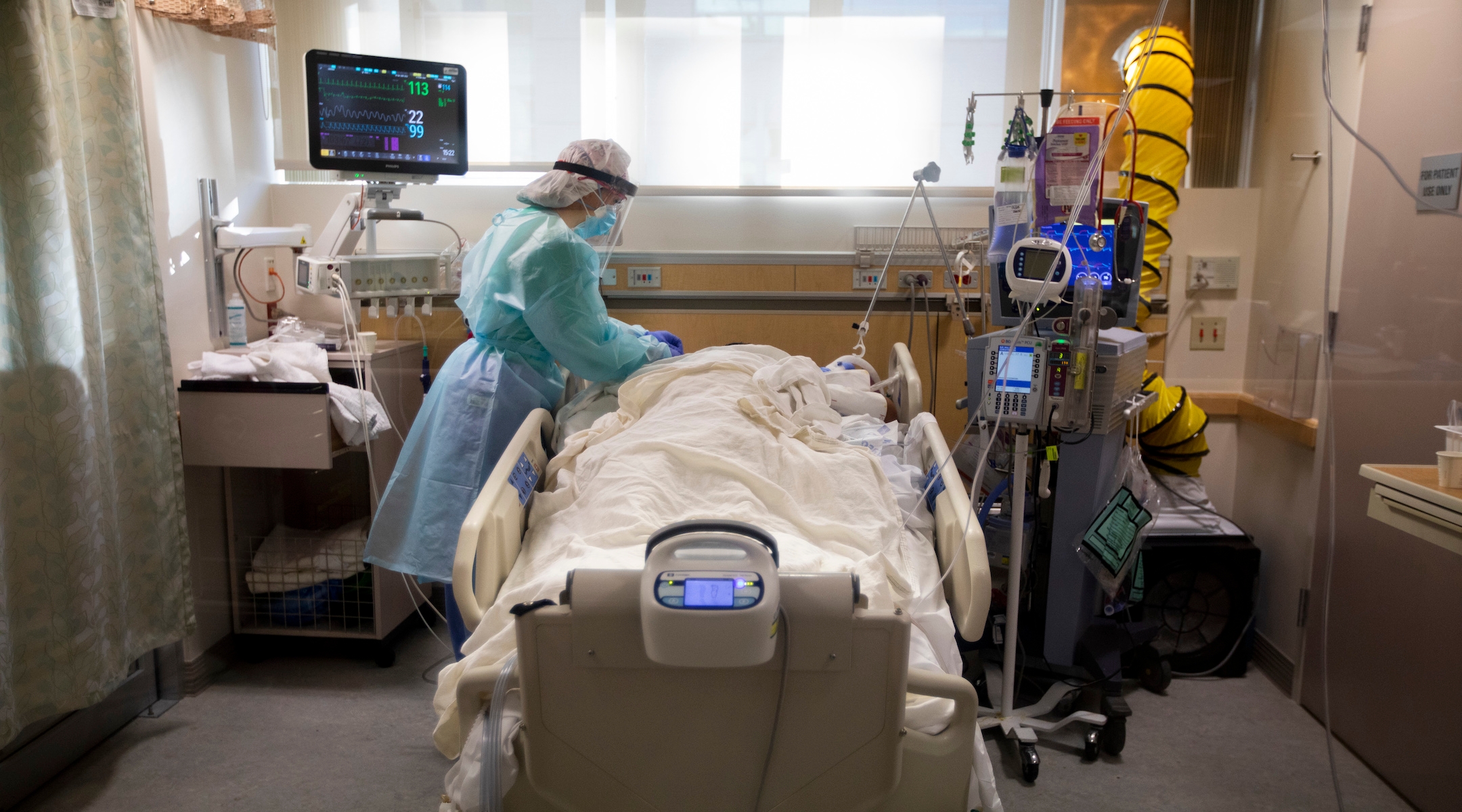 Arizona Jews, who are concentrated in the Phoenix area and number nearly 100,000 people in Phoenix alone, are feeling it.

Rabbi Irwin Wiener of Sun Lakes Jewish Congregation, a Reform synagogue of about 400 people who live in a retirement community, said deaths are up about 50% above normal. Compounding matters, the rabbi can’t visit in person with grieving or ill congregants.

“I get a lot of calls from grieving families and give them as much consoling as I can,” Wiener said. “It’s very difficult to do because nothing is being done face to face. And there are people in hospice I can’t visit because of COVID restrictions. It’s a very difficult situation.”

At Green Acres Mortuary and Cemetery in Scottsdale, Arizona, a city that borders Phoenix, the number of COVID-19 deaths has jumped 65%  in the past month, according to Amie Gazda, the general manager.

“I have never seen anything like this personally, and I have been in the business for 24 years,” said Gazda, whose cemetery has a section set aside for Jews. “It’s been quite overwhelming. There have been delays in burials. Hospitals get backlogged and delay releasing the bodies to our care. And there are delays in getting death certificates and burial permits.”

In Los Angeles, Howard Kaplan, the general manager of Mount Sinai, said other area cemeteries are asking his mortuary to store bodies for them because they are so backed up. Kaplan’s staff works around the clock.

“In some cemeteries the wait is a week or 10 days,” Kaplan said. “In some of the bigger, non-Jewish cemeteries, they are three or four weeks out. People who have worked here for 20 years or more have never seen anything like this.”

The proportion of coronavirus-related deaths the cemetery is handling has soared along with the caseload. In November, about 6% of deaths were COVID-related. In December the figure was 19% and now it’s 35-40%, according to Kaplan. By contrast, during the spring coronavirus surge in April and May, the figure was approximately 15%.

A more contagious variant of the coronavirus is being blamed in part for California’s spiking caseload. 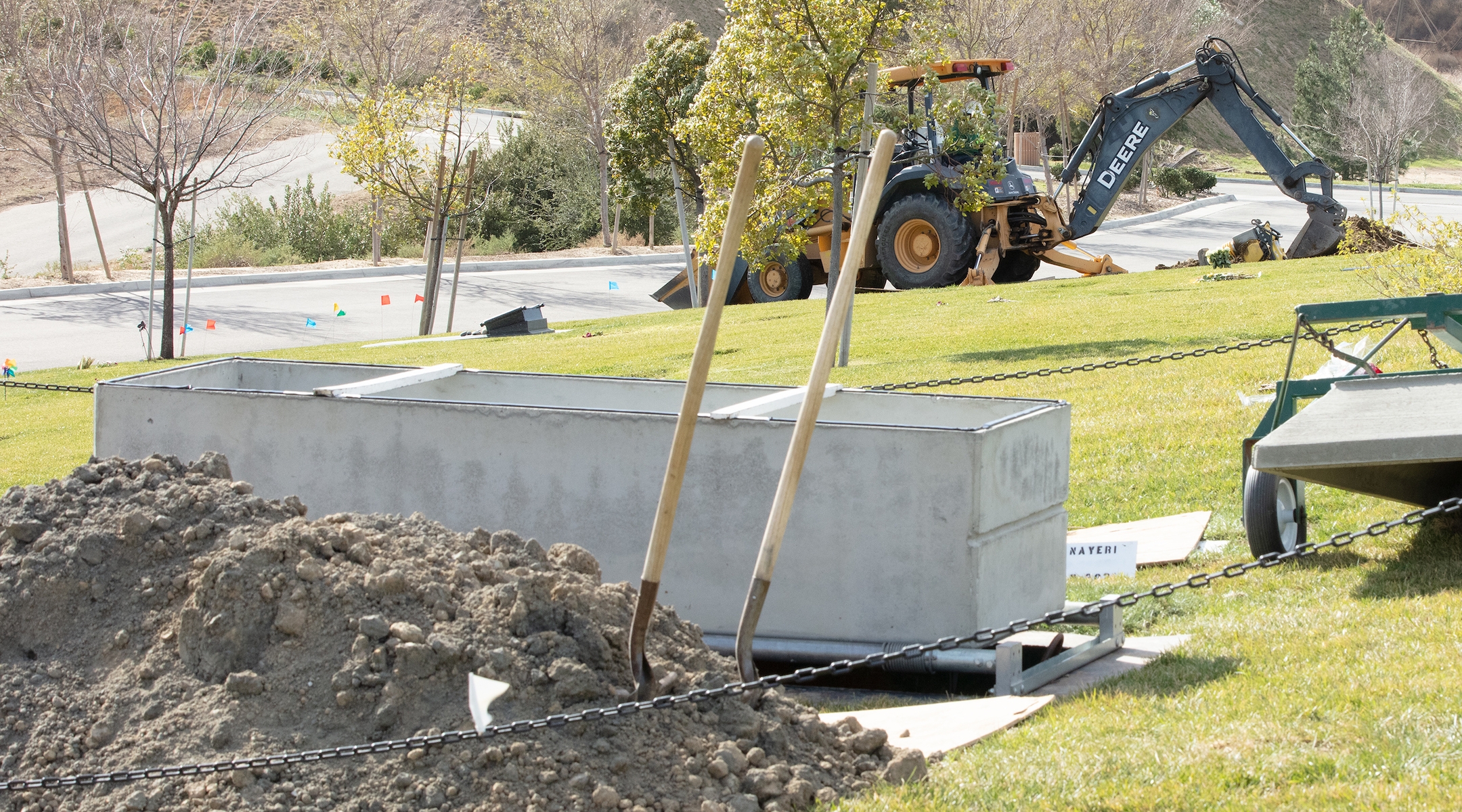 A grave is dug at the Groman Eden Mortuary at Eden Memorial Park in Mission Hills, Calif. (Anthony Lampe)

At Valley Beth Shalom, a Conservative shul in Los Angeles County that is one of California’s largest, the rabbi has been swamped with funerals.

“Normally, in a congregation like mine you might see two or three deaths in a week and then no deaths and then a few deaths,” the senior rabbi, Ed Feinstein, said. “But we have been in a wave for the last four weeks. We must have had 25 deaths of members or their parents. I’m doing three or four funerals a week, and I have two other rabbis who are equally very busy.”

Even some of the non-COVID deaths might be related to the coronavirus, Feinstein said, because doctors are so overwhelmed that patients with other illnesses cannot get adequate care.

David Estephan, who owns a funeral home in the L.A. area and also operates a business that transports bodies from hospitals, private homes and convalescent homes to Jewish funeral homes, said his crews have been instructed because of the coronavirus to no longer unzip body bags to check for jewelry and double check the person’s identity. He’s also turning people away from his funeral home because he has no room to store bodies before burial.

Also due to COVID-19, tahara rituals – in which a Jew’s body is ritually washed before interment – are suspended at Mount Sinai unless a family specifically requests it because of the risks associated with handling bodies that were infected with the virus. Instead, body bags containing the dead are being placed directly into caskets.

As for the funerals themselves, they’re being conducted with minimal family or friends present due to the risks associated with gatherings of people.

At Mt. Sinai Cemetery in Phoenix, funeral services are no longer permitted inside chapels because of COVID. The cemetery built a 32-foot outdoor pavilion for services with 10-15 chairs set up 6 feet apart for the immediate family. The funerals are broadcast online.

“We put in new equipment a couple of months ago to offer streaming of the service for our families who are out of state or who can’t come because of COVID,” said Wendy Konick, a family counselor.

“It’s never easy to lose somebody, but losing someone during a pandemic makes it more difficult,” Gazda of Scottsdale’s Green Acres Mortuary and Cemetery said. “They don’t have the customary support from their family and friends to provide comfort.”