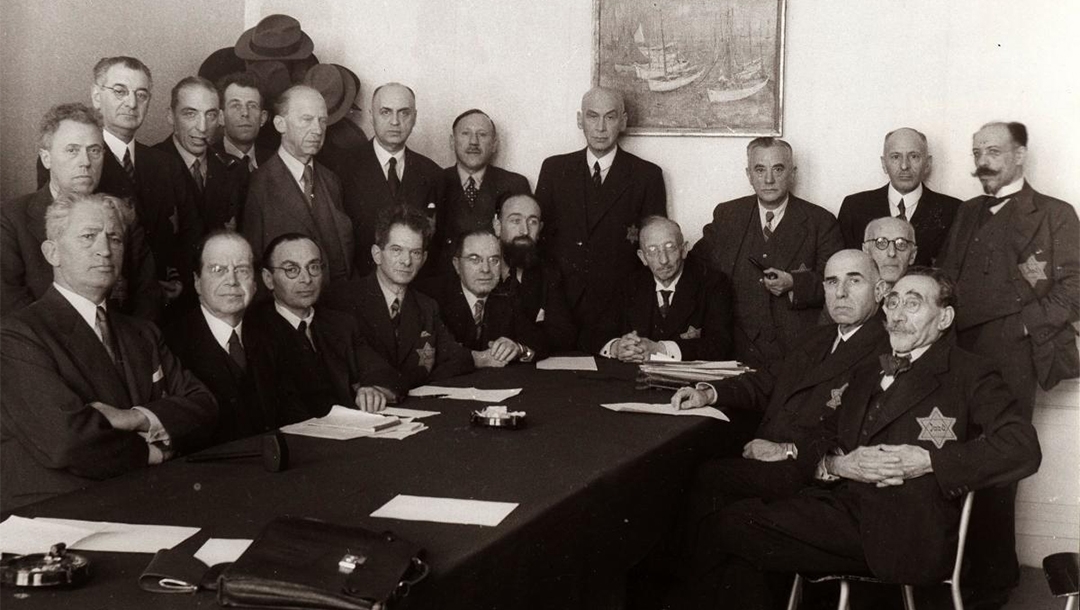 The Jewish Council of Amsterdam was a body set up by the Nazis to have Jews oversee preparations for the extermination of their own minority throughout the Netherlands during World War II. (Courtesy of the Jewish Cultural Quarter of Amsterdam)
Advertisement

AMSTERDAM (JTA) — Sonja Levy was a positive person who made an excellent first impression and whose important position exempted her from deportation, according to the personal card that the Jewish Council of Amsterdam made for her during the Nazi occupation.

But the accolades on the card weren’t enough to save Levy, a kindergarten teacher who was in her early 20s when the Germans invaded.

Like more than 100,000 Dutch Jews, she was eventually put on a train to the death camps in occupied Poland and murdered there in a gas chamber.

On Monday, ownership of her personal card – it turned out to be her first epitaph — was handed over to the main museum of the community to which she belonged.

Ahead of International Holocaust Remembrance Day on Wednesday, the Netherlands branch of the Red Cross has transferred to the Jewish Cultural Quarter of Amsterdam — an umbrella of several Jewish institutions, including the National Holocaust Museum of the Netherlands — ownership of more than 140,000 personal cards of Dutch Jews that are slated to be displayed to the public for the first time.

The entire index of the Jewish Council of Amsterdam — a body that the Nazis set up to have Jews oversee preparations for the extermination of their own minority throughout the Netherlands — is among the most comprehensive and best-kept registries of its kind anywhere in Europe.

It is unusual in that it includes references to status and personal traits, reflecting how this registry, unlike most other Nazi lists, was made by for Jews by Jews.

In more than 75% of the cards, the Red Cross after World War II added the date of deportation in red ink — a rare tangible reminder of how in the Netherlands, the Nazis achieved their highest death rate anywhere in occupied Western Europe. Of about 110,000 Jews deported, only a few thousand survived.

The index “is of great value not only as an archive but also as a museum monument and a tangible reminder of the Holocaust,” the Red Cross wrote.

The cards were digitized in 2012 and available for viewing online upon specific request for a name or other identifying details. But browsing the cards has not been possible. The National Holocaust Museum of the Netherlands is now designing the cards’ display ahead of the reopening, but they will be visible for all to see, according to Emile Schrijver, the director of the Jewish Cultural Quarter.

“It is of the utmost importance that we can show the physical memory of all the Jews who were murdered,” he said.

The cards’ display will add to the picture of Dutch victims that other archives have sketched out. According to the National Holocaust Museum, Sonja Levy was deported in 1944 to Auschwitz-Birkenau and murdered there. She died just weeks after her 25th birthday.

The Jewish Monument, a website that includes the names of most Dutch Holocaust victims, said her husband, a blind architect named Alfred, died there, too.

The Red Cross’ action comes amid major admissions of guilt in the Netherlands over the fate of the country’s Jews.

In 2017, the Netherlands Red Cross apologized for “making things too easy” for the Nazis and failing to speak up for Jews due to “lack of courage,” as the Dutch branch’s chairwoman, Inge Brakman, phrased it.

Last year, Dutch Prime Minister Mark Rutte apologized for the first time for how the Dutch government in exile and authorities in service of the Germans had “failed in its responsibility as a provider of justice and security” for Dutch Jews. For decades, Rutte and his predecessors had declined calls by Jewish groups for them to apologize. Rutte’s apology came more than 15 years after those by leaders of neighboring countries, including France and Belgium.

Also in 2020, King Willem-Alexander for the first time acknowledged how many Dutch Jews felt forsaken by his great-grandmother, Wilhelmina, who escaped to the United Kingdom when the Germans invaded.

“Fellow human beings felt abandoned, insufficiently heard, insufficiently supported, even with words,” Willem-Alexander said at a ceremony for World War II and Holocaust victims. “Also from London by my great-grandmother, despite her steadfast resistance [to the Nazis]. It’s something that won’t let go of me.”