The Jewish angles to the GameStop stock saga, explained Investors have used the Robinhood app to give the video game company GameStop a boost. (Olivier Douliery/AFP via Getty Images)
Advertisement

Update: Robinhood said on Thursday afternoon that it will allow users to start trading GameStop stock again on Friday.

(JTA) — Even if you never pay attention to stock market news, you have probably gotten the sense that something unusual is happening right now, and it has to do with something called GameStop.

The video game store sits at the center of a dramatic “short squeeze” that has market watchers wondering whether stock trading could forever be changed. Multiple prominent Jewish money managers are involved in the saga, on both the winning and losing sides. Online anti-Semites have noticed, seizing the opportunity to connect it all to age-old stereotypes about Jewish manipulation of the financial world.

And like there was in the Bernie Madoff scandal, there’s a connection to the New York Mets.

What went down (in plain English)

On Tuesday, GameStop’s stock price rocketed up over 90% of its previous price, sending shock waves through the entire stock market and the broader world of finance.

But the company, which has been hurt badly during the pandemic, did not suddenly change its business model or win the lottery — online groups, mostly on the social media site Reddit, rallied to the company’s defense, buying GameStop shares in an enormous spree. In their view, they were attempting to save the company from being “shorted” by hedge funds, which were betting big on the retail chain’s eventual demise.

The movement behind the stock jumps didn’t start on Tuesday. Bloomberg reported that chatter surrounding GameStop in particular began last October. But years before that, an entire internet subculture has built up around watching stocks (referred to by those in the know as “stonks,” a purposefully comic misspelling), on sites such as Reddit and 4chan.

These so-called Reddittors — many of them with more time on their hands as sports betting has decreased during the pandemic — saw an opportunity in the case of GameStop to do several things: to financially dent the hedge funds that make billions of dollars by regularly betting on the failure of faltering companies; to “troll” the industry in what they view as a humorous way; to support a company they feel a special affinity for; and to show the collective power of those without huge sums of investment money to spend.

Here are the nuts and bolts of what they did, in the simplest terms possible, thanks to a Vulture article:

Say your friend has a book worth $10. You ask to borrow that book and promise to give it back to them in ten days. You then sell that book to someone else for $10. You are betting that, in ten days, you will be able to buy that book for cheaper. So in ten days, you buy the book for $4 and return the book to your friend. You have made $6. Now imagine that book is actually the stock of a company. (This is a highly reductive and possibly inaccurate description of what short sellers do.) But if, in that span of ten days, that book’s value goes up to, say, $1,000, you will have to buy the book for $1,000 before you return it to your friend. What the redditors are doing is basically pumping the price of that book/stock to astronomical amounts so that the short sellers are, as the saying goes, “squeezed.” Only it’s not $10 we’re talking about but billions of dollars.

After the soaring success of the GameStop squeeze, masses of online traders moved on to other companies with similar troll and nostalgia values that were also in danger of being shorted, such as the flailing movie theater chain AMC Entertainment Holdings and even Tootsie Roll Industries Inc.

The main squeeze victims in this story are Steve Cohen and Gabe Plotkin, two Jewish investors who are also two of the most successful hedge fund chiefs on Wall Street. Cohen, the new owner of the New York Mets baseball franchise, had a net worth of over $14 billion as of last year. Plotkin, who once worked under Cohen, manages close to $8 billion in assets under his Melvin Capital firm. Plotkin has been honored by the Chabad Hasidic movement and worked with the Young Jewish Professionals networking group.

The effects on their assets have been huge. So far this month, Cohen’s Point72 hedge fund has lost 15% of its value. Melvin Capital has lost as much as 30% — a bill so steep that Plotkin asked Cohen and investment firm Citadel LLC, run by Dan Sundheim, for an emergency influx of cash (which they provided, to the tune of $2.75 billion). 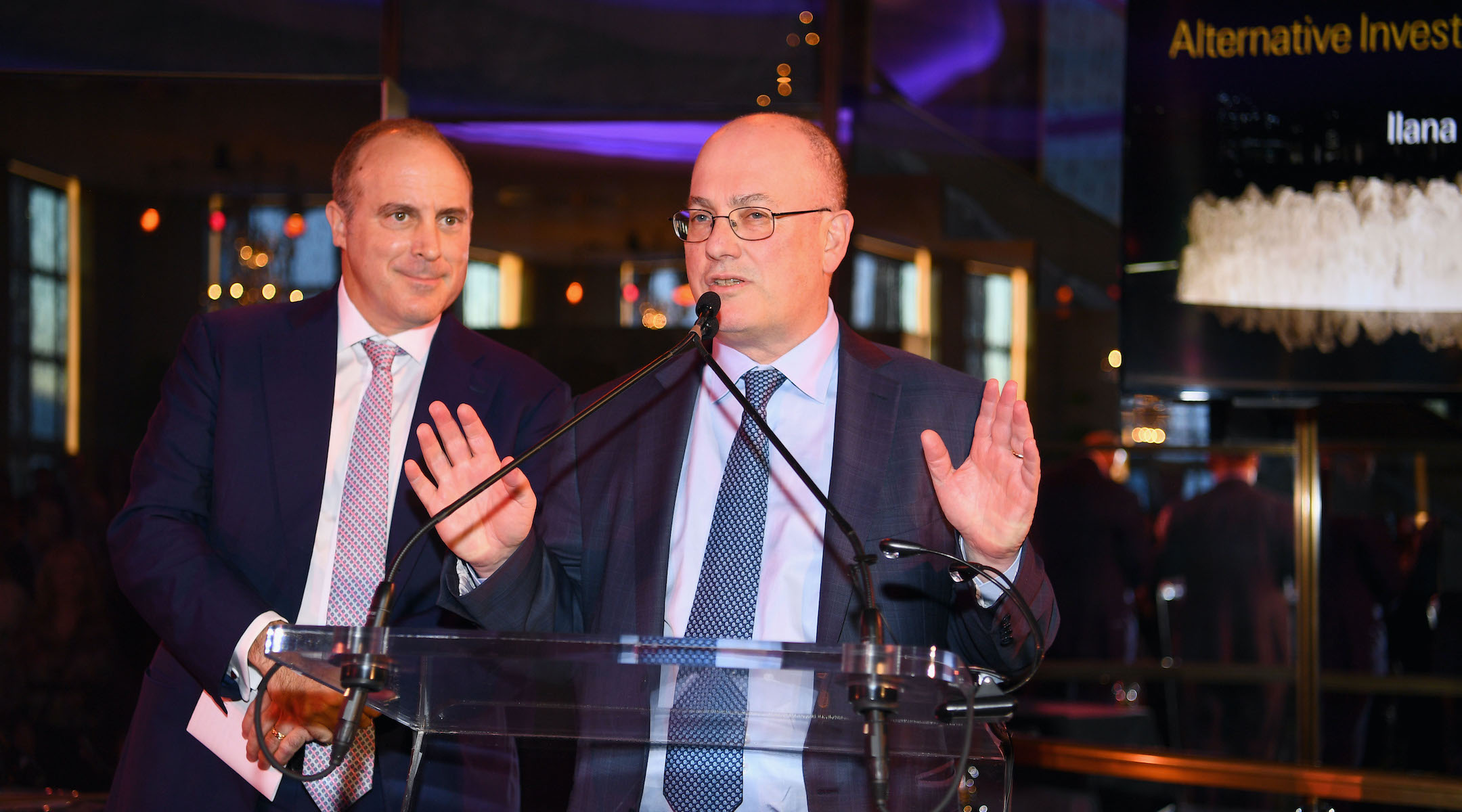 But they aren’t the only Jewish characters involved. Ryan Cohen, CEO of the successful pet products company Chewy, is the largest stakeholder in GameStop, with about 9 million shares, making him the big winner of the week. As of Wednesday, he had made $3 billion from the fallout.

Then there’s Jewish troll extraordinaire Dave Portnoy, founder of the hugely popular blog and social media company Barstool Sports, who has emerged as one of the leading public advocates for the mass of small investors who mostly remain anonymous on sites like Reddit. More on his reaction below.

Many of the rebellious traders use Robinhood, an app that allows users to trade stocks without fronting huge minimums of money. Its mantra: “Let the people trade.”

But on Thursday, Robinhood shut down the trading around GameStop, AMC and other companies that the small-money investors had given a bump in an effort to curb market “volatility.” GameStop and other stocks predictably plummeted without the Redditors to keep them afloat.

That move has enraged a wide spectrum of observers, especially since Robinhood is partially funded by Citadel. That fact has sparked claims that the hedge funds involved colluded to unfairly stop the bleeding.

Portnoy has been out in front on the issue, displaying his anger on Twitter.

“I will burn @RobinhoodApp to the ground if they shut down free market trading,” he wrote in one tweet that garnered nearly 100,000 likes.

So @RobinhoodApp is saying they are protecting their users from over leveraging and getting burned. But somehow it’s okay when hedgefunds literally do the same exact thing. Nobody had a problem then until the hedge funds lost. Now speculating is a huge issue. #frauds

All of the above has made the whole scenario ripe for anti-Semitic exploitation. Some of the most common age-old anti-Semitic tropes include the idea that Jews secretly manipulate the world’s money.

In reaction to the Robinhood shutdown, anti-Semitic memes about the situation have cropped up on a sub-group of the main Reddit thread, r/wallstreetbets, and on 4chan, a site known for being full of crude anti-Semitic images. 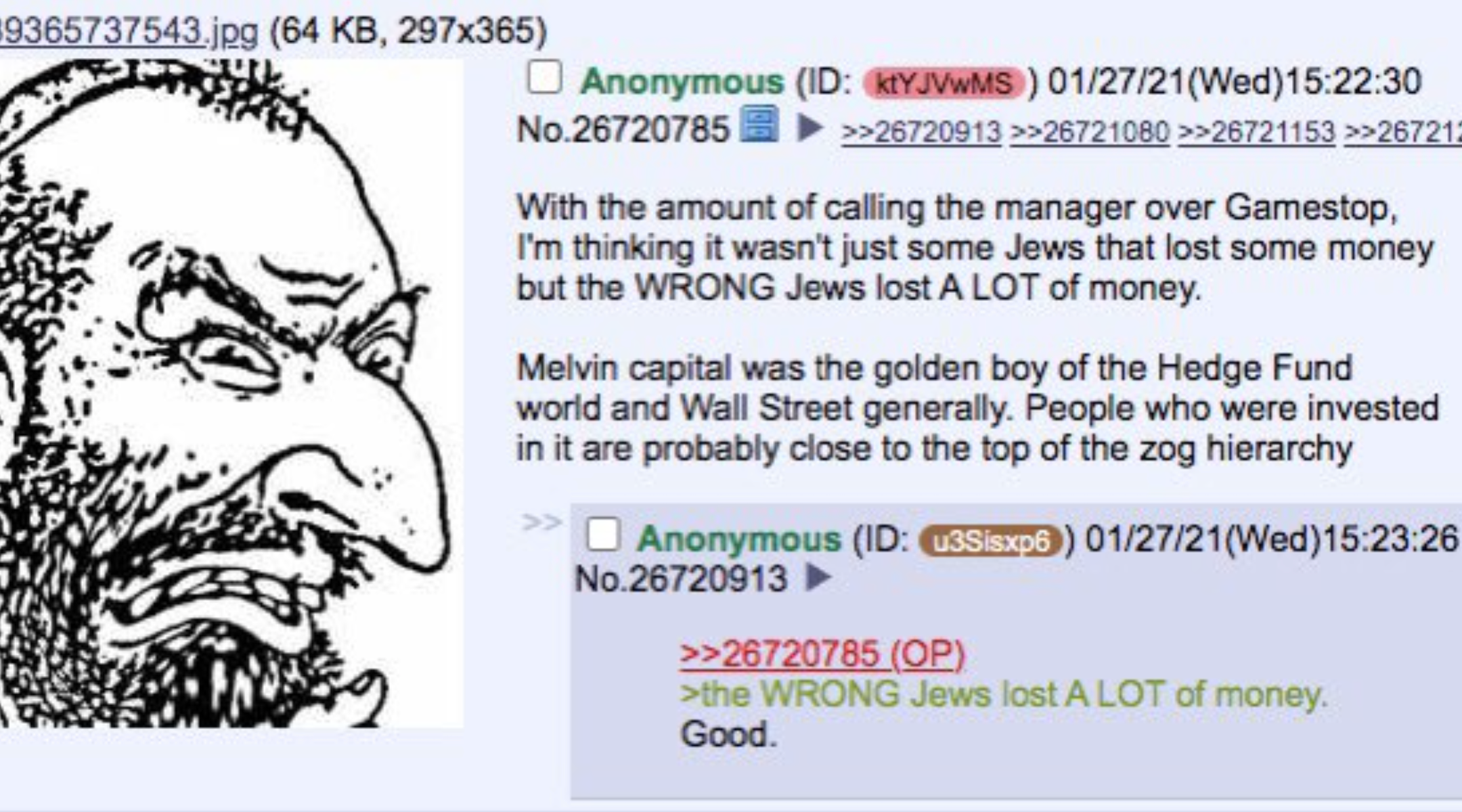 Observers of the online far-right have also noticed that anti-Semitic groups are latching onto the moment, trying to sneak their beliefs into something that is snowballing into a wider “David vs. Goliath” movement.

Anyone who's not noticing literal Nazis and far-right disinfo grifters like Mike Cernovich rabidly tweeting in support of the GameStop squeeze is a fucking dumbass, and as usual, @lilsarg is correct.

As a bonus to all of this, New York Mets fans are worried that the financial hit Cohen is taking could mirror the disaster that the team’s previous Jewish owners, the Wilpon family, went through after the Bernie Madoff scandal (which affected so many Jewish investors and institutions).

Cohen has earned praise throughout New York and around the sports world for committing to spending highly on top players and promising to turn the team into a perennial competitor.

Asked on Twitter — where he frequently interacts with fans — if the GameStop squeeze was going to impact the team, he bluntly said no.

One fan wrote: “Is this Gamestop business effecting[sic] the Mets payroll? I mean that’s the main story in all of this.”

“Why would one have anything to do with the other,” Cohen responded.