‘There’s no one right way to kohenet’: The Hebrew priestess movement aims to center women’s voices 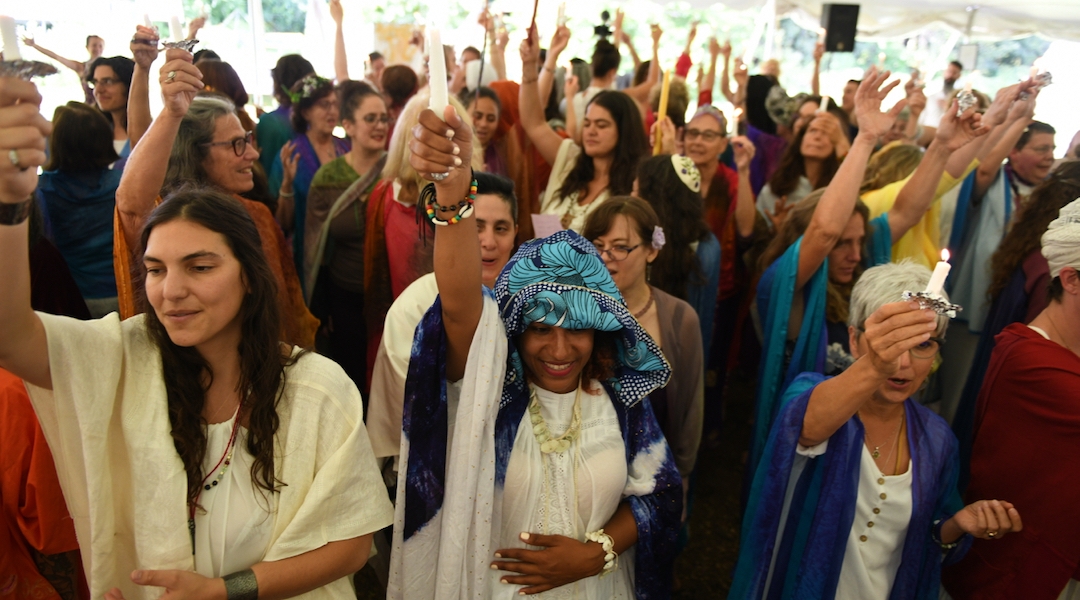 (JTA) — As Kohenet Rachel Kann welcomes participants to a Shabbat prayer and meditation experience she leads each month in Los Angeles, she intones a chant while playing the shruti box, an Indian version of the harmonium.

A poet, artist, and dancer in addition to a kohenet (Hebrew for “priestess”), Kann invites participants in her Realize Paradise: Shabbat Soul Journey services to get comfortable — and many do, adopting yoga poses or lying down, drumming or dancing, even now that the event is on Zoom. The service includes a Native lands acknowledgement, in recognition that Kann’s L.A. neighborhood sits on land once home to the Kizh, Tongva and Chumash peoples, and many invocations of the shekhinah, the feminine aspect of God popularized by the Jewish mystical tradition. In an effort to be as inclusive as possible, the traditional prayers are regendered from masculine to feminine Hebrew and pasted in English into Zoom’s chat function.

If the idea of a Hebrew priestess seems radical, it may not be for long. Kann is one of nearly 100 graduates of the Kohenet Hebrew Priestess Institute who are seeking to reclaim ancient Jewish forms of female spiritual leadership while pushing the edges of theology and religious practice.

Inspired by ancient Jewish figures like the biblical Miriam, who led women in song with a drum during the Exodus story, the institute’s approach is earthy and spiritually inclusive, focusing on meditation, movement, drumming and music. The founders are committed to reclaiming lost rituals, centering womens’ voices and crafting spiritual leadership that is attuned to today’s most pressing issues, from environmental devastation to creating safe spaces for Jews of color and gender non-conforming Jews — an emerging challenge for the institute, whose prayer and ritual uses feminized Hebrew.

Rabbi Jill Hammer, who co-founded the institute in 2006 with Taya Shere, started her rabbinical studies at the Jewish Theological Seminary searching for a feminist approach to Jewish culture and text. But even JTS’s egalitarian approach felt to her like “add women and stir,” she said.

“I felt very challenged by the relentless barrage of rabbinic texts that didn’t include the perspectives of women … [as if saying] you can play or participate, but please don’t touch the system that created all of this,” Hammer said. “It felt like a loaded pair of dice that I was being asked to play with. But also at JTS, I really got the skills to see that there’s so much more to Jewish history, there must be a way in that would fully center the voices of the feminine.”

When Hammer and Shere created the institute, they chose the term priestess because it seemed like an authentic name for what they were doing. The term kohen in Hebrew traditionally refers to Jewish priests, descended from Moses’ brother Aaron, who were charged with performing sacred work. Kohenet is the feminine version of kohen.

Jewish priestesses now serve in a variety of spiritual roles, from synagogue clergy, prison chaplains and hospice counselors to herbalists, midwives and storytellers. Some are developing queer mikvah practices or providing Jewish ritual contexts to frame activism on gender politics or climate change. Others are poets and performance artists, doulas and therapists.

“There’s no one right way to kohenet,” said Shere. “Each person brings perspective according to their gifts, passions and scope of practice.”

Students come from diverse backgrounds, ranging from the haredi Orthodox to those who only became aware of their Jewish identity later in life. While they seek to become priestesses for various reasons, all are drawn to the idea of exploring God, faith and Jewish practice through a feminist lens.

Chandler officiates at Jewish life cycle celebrations and runs the Shamir Collective, a nonprofit advising spiritual leaders about renewing the Jewish relationship with the earth. “At almost no point was I really seeking a title or ordination,” Chandler said. “What was meaningful was how different we were from each other.”

Bekah Starr, who lives in New York’s Hudson Valley — or “the lands of the Wappinger First Nation people” as her website calls it — is a multimedia artist who works with painting, drawing, illustration, installation and weaving based on “kohenet-style” Judaism. 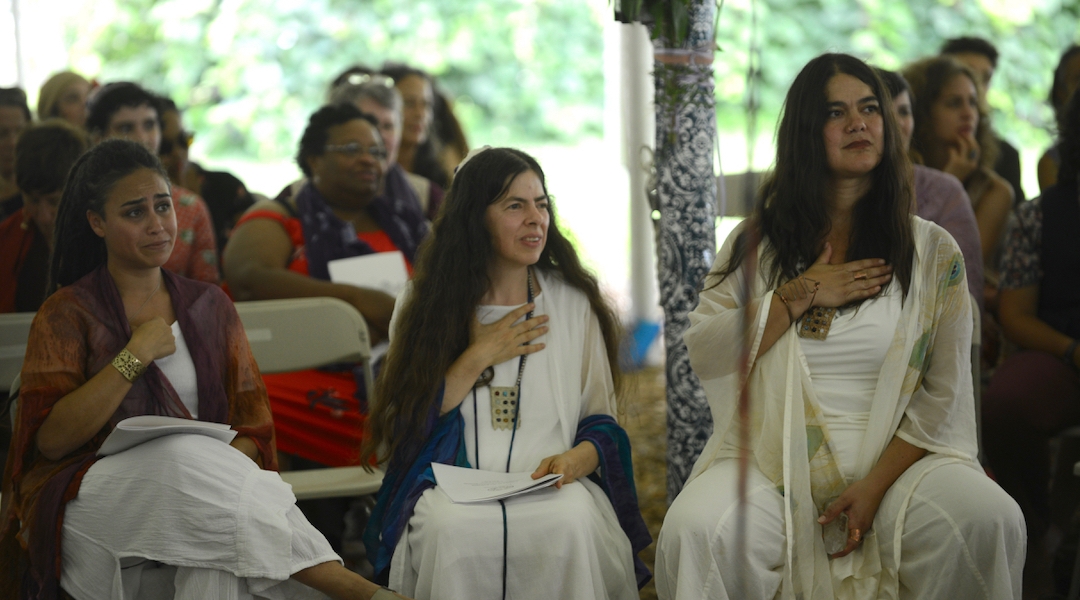 Miki Raver, now on the clergy team at Burbank Temple Emanuel in California, is a longtime ritual leader who had self-identified as a priestess for years before connecting with a cohort of like-minded women through the institute.

“It means so much to me not to be alone, to be learning together and supporting each other,” said Raver.

Harriette Wimms, a licensed psychologist and activist who goes by the name Harriette Mevakeshet in Jewish spaces, created a kohenet-inspired retreat in her community in Baltimore, Maryland, and works on creating spaces for Jews of color.

“[Kohenet] encourages women to become leaders in Jewish space and it has helped me to aspire to become a professional Jewish leader,” said Mevakeshet, a Jew by choice who will be ordained as a kohenet this summer. “Kohenet also centers the voices of female-identified folks, voices that need to be lifted up within the Jewish community. As a kohenet of color, I feel particularly supported in my Jewishness and my Blackness. Kohenet space embraces all the aspects of who I am.”

The curriculum for the three-year training and ordination program centers on 13 netivot, or paths, exploring various female archetypes: midwife, wise woman, prophetess and others, studied alongside more traditional Jewish texts. The program also focuses on expanding contemporary Jewish life cycle rituals, empowering students to create their own rituals and spiritual experiences they can use to help others mark their sacred moments. The course of study culminates with an ordination ceremony.

“A religion should meet the full needs of our life cycle and its important moments,” said Rachel Rose Reid, a U.K.-based writer, spoken word artist and storyteller and one of the first priestesses ordained outside of North America. “I want to empower people so that if they can’t find what they need in a book, they can create whatever ritual is needed to meet their purpose, knowing that it has long been a Jewish tradition to do so. I want them to know they are not alone, and that each time they do this, they are raising up half-forgotten ancestors.” 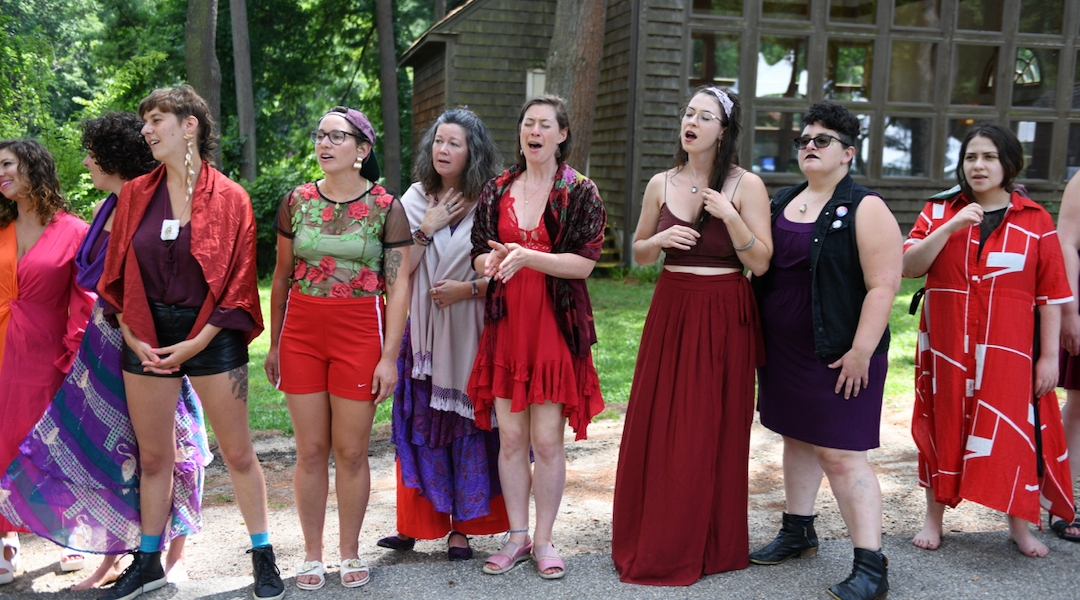 Students are from diverse backgrounds, ranging from Orthodox to those who have rediscovered their spirituality later in life. (Gili Getz/Kohenet Hebrew Priestess Institute)

Ketzirah Lesser, who was ordained in 2009 as part of the institute’s first cohort, reflects the variety of work that can be nested inside a priestess’ practice. She has led religious services, written poetry and prayers, crafted innovative ceremonies inspired by Jewish tradition, and created amulets and other spiritual objects, including tarot card alternative based on kohenet teachings. As a “corporate priestess,” she draws on her professional experience in advertising and communications to create change in corporate environments. Her LinkedIn profile also identifies her as a “syrup baroness,” as co-founder of a maple syrup company.

Her most recent initiative, Golem/et, draws on the medieval myth of the golem, a lump of clay magically brought to life to protect the Jewish community of Prague. Lesser urges her social media followers to craft their own golem (or golemet, a feminine version) and provides instructions on her website about how to “activate” or “deactivate” its protective powers.

“The impact of kohanot on the Jewish community has been far larger than our numbers,” Lesser said. “I’ve seen us go from a group being called heretics and worse to the community people turn to for new music and exploration of prayer and Jewish practices for the 21st century.”

The ordaining of Hebrew priestesses to serve as Jewish clergy led to discomfort in some circles. Even in liberal denominations, some Jewish leaders expressed concerns about Kohenet’s use of paganism and earth-based rituals alongside traditional Jewish teachings. Though priests served daily religious functions in the ancient Temple, their contemporary roles are largely limited to certain synagogue privileges. And because there is no precedent for women serving in priestly roles, the term “priestess” is sometimes associated with paganism or magic.

“All those terms are political,” Hammer said. “Magic is what you call ritual done by people who aren’t part of a hierarchy. Rabbis davening in shul is praying, women doing unsanctioned ritual at home with incense is magic.” 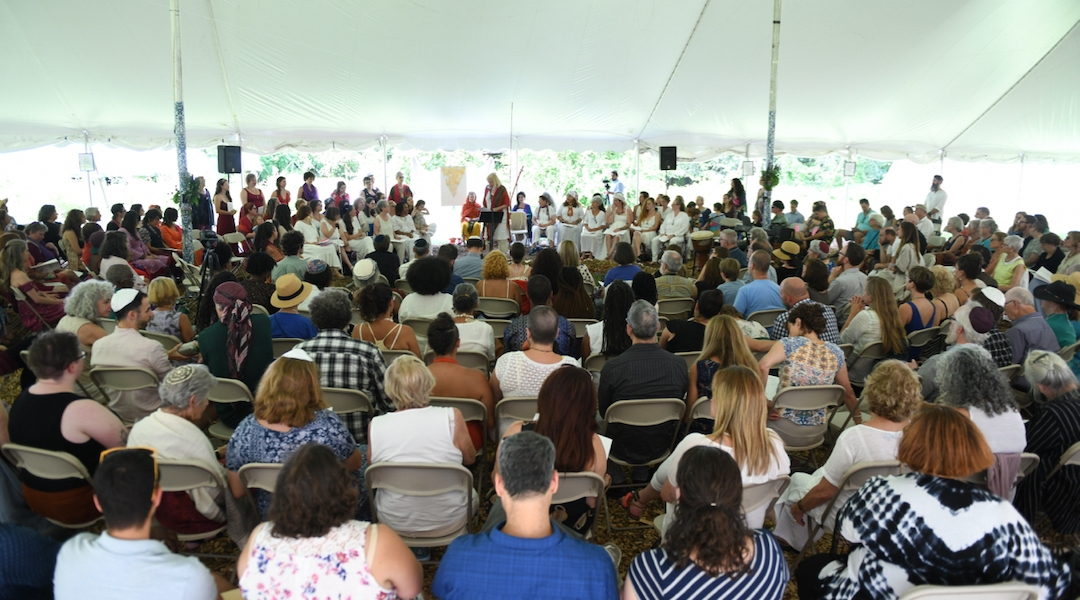 Many priestesses say that early skepticism has faded as communities have come to embrace the kohenet style and even made it normative. Keshira haLev Fife, the institute’s executive director and “oreget kehillah” (community weaver), says liberal Jewish communities in particular are increasingly seeking the kind of earth-based “Jew witchery” institute graduates offer. And while some still see the community as fringe, priestesses don’t negate traditional Jewish practices.

“We have Shabbat and study the [weekly Torah portion] like other Jews,” Hammer said. “We don’t totally throw it all out. It’s part of our sacred work and body of knowledge that we use.”

Originally an in-person program at Temple Mishkon Tephilo in Venice, California, Realize Paradise Shabbat Soul Journey, like Kann’s other programs — including her New Moon Unions, a monthly multimedia experience that includes poetry, drumming, chanting and DJ-ing — have become accessible to more people than ever before via Zoom. The same is true of weekly Shabbat services — originally limited to the institute’s gatherings and special events, but now held weekly online with participants from across the world.

“We’re changing because the whole world is changing,” said Fife. “It’s an exciting time to be alive, Jewish and a kohenet. I believe our ways of leading and community making are fundamental to what’s coming next.”

Suzanne Levy, a radio news editor who regularly attends Kann’s Shabbat service, said she finds the experience takes her “into a different dimension.” While traditional Jewish services are “quite heady,” Levy says she enjoys the physicality of the service and its embrace of Jewish mysticism.

“It pushes my Jewish boundaries a little, but I like being pushed, ” Levy said. “What’s the point of religion if it’s not mystical?”