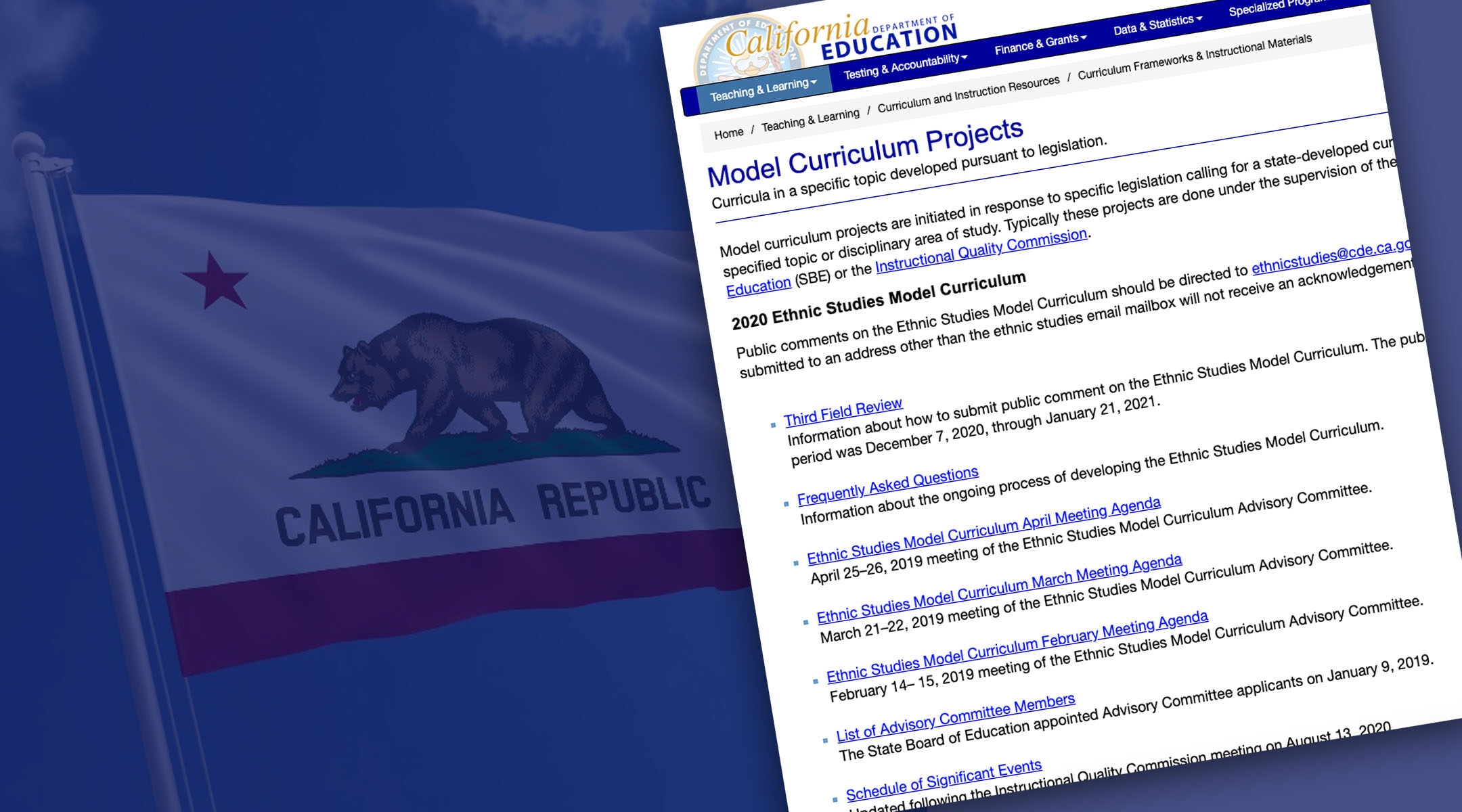 A schedule of events related to California's Ethnic Studies Model Curriculum with the state flag in the background. (JTA montage)
Advertisement

(JTA) — We all know the saying: two Jews, three opinions. But for once, the controversy around California’s Ethnic Studies Model Curriculum seemed to be an exception.

In 2016, California passed legislation requiring that the state Board of Education adopt an Ethnic Studies Model Curriculum, or ESMC, for high school students, hoping to better represent the diversity of students within the state. The first draft, released in August 2019, unfortunately contained anti-Semitic and anti-Israel content. Gov. Gavin Newsom vetoed a bill that would have made ethnic studies a high school graduation requirement, noting in a September statement that the model curriculum “still needs revision … to ensure that the draft Ethnic Studies Model Curriculum achieves balance, fairness and is inclusive of all communities.”

A third draft was released in December. California law requires the state Board of Education to adopt an Ethnic Studies Model Curriculum by March 31. While the ESMC’s critics continue to cite objectionable or outright bigoted language from the initial draft, the reality is that because of Jewish communal unity in California we have made tremendous progress in getting major changes made.

Since 2019, Jewish and interfaith groups throughout California successfully united to remove anti-Semitism and the erasure of Middle Eastern minorities from the proposed curriculum, turning what had been a hurtful document into a model for how to include content about Jews in the contemporary classroom. I know because I have been deeply involved with this process.

As the executive director of JIMENA: Jews Indigenous to the Middle East and North Africa, an organization created to raise awareness to these 1 million Jewish refugees and their Sephardic and Mizrahi descendants, I organized a coalition in 2019 of 11 California-based Sephardic organizations to respond to the problematic first draft of the curriculum and to stay engaged in helping the state create a less divisive curriculum.

Together we shared our deep concerns and hopes for a curriculum that followed the statutory guidelines created by the state Board of Education for the ESMC to be “balanced,” ‘inclusive,” “rigorous” — and most importantly, free of discrimination and bias.

Our journey has not been without challenges. Jewish communal leaders and volunteers across the state have studied and debated thousands of pages and multiple drafts and navigated the too frequent affronts to our work by those still not quite ready to find space in schoolbooks for our diverse Jewish-American ethnic groups and experiences.

Our efforts bore fruit: Thanks to the tremendous work of StandWithUs, the American Jewish Committee, the Israeli-American Council, Jewish Community Relations Council, interfaith allies, JIMENA and our partners, we mobilized diverse Jewish communities throughout California and worked with the California Department of Education not only to remove anti-Semitic content, but to add lesson plans about Jewish Americans and anti-Semitism.

Despite reports to the contrary, the latest draft of California’s Ethnic Studies Model Curriculum does not teach the Boycott, Divestment and Sanctions movement. Students will not be taught the lie that Jews are somehow foreign interlopers in our ancestral homeland. Instead, students will learn that all Jews are indigenous to Israel, they will study the realities of contemporary anti-Semitism, hear about the diversity of Jewish life in America and be exposed — many for the first time — to the stories of Mizrahi and Sephardic Jewish Americans.

The inclusion in the curriculum of JIMENA’s lesson plan, “Anti-Semitism and Jewish Middle Eastern Americans,” represents an achievement for the Mizrahi and Sephardic community in America. For the first time in U.S. history, Sephardic and Mizrahi Jewish Americans will be explicitly represented in the statewide K-12 curriculum, and California public school students will have the opportunity to learn about our communities and hear our stories. Los Angeles’s Iranian Jewish community is one of the largest Middle Eastern Diasporic communities in the world, and we are proud that through modifications to the curriculum, students from this community will see themselves reflected in their studies.

Our success is also a testament to intercommunity organizing: We and other members of  Advocates for Inclusive Middle Eastern Education, an interfaith coalition of MENA minority communities that represents the 60% of California’s MENA population,  advocated for an inclusive curriculum that doesn’t overlook the state’s Iranians, Kurds, Assyrians, Bahai, Yezidi and other non-Muslim Middle Eastern minority communities.

The new draft curriculum is one that represents and celebrates all Jews, and provides critical resources and contexts to the current struggle against anti-Semitism. Perhaps most crucial, through JIMENA’s lesson, the Ethic Studies Model Curriculum for the first time canonizes the International Holocaust Remembrance Alliance working definition of anti-Semitism — considered the gold standard by international governments, organizations and much of the Jewish-American community — in K-12 education in the biggest state in the country.

It is unfortunate and counterproductive that after years of hard work and toil, some in the Jewish community wish to undo these advances and discredit the Ethnic Studies curriculum outright — including eliminating its important lessons on anti-Semitism. Citing outdated material and misrepresenting the lesson’s content commentators have styled themselves as defenders of Jews in the classroom.

In reality, they are erasing the combined labors of countless Jews in California, and the consensus efforts of California’s communal Jewish organizations, which have ensured that Jews of all backgrounds will see themselves reflected in the Ethnic Studies curriculum.

Sarah Levin
is the Executive Director of JIMENA: Jews Indigenous to the Middle East and North Africa, an advocacy and education institution dedicated to raising awareness to Jewish refugees from Arab countries and Iran. Sarah has conceptualized and developed a number of campaigns and projects for Mizrahi and Sephardic Jews to explore and preserve their heritage and identity.
The views and opinions expressed in this article are those of the author and do not necessarily reflect the views of JTA or its parent company, 70 Faces Media.