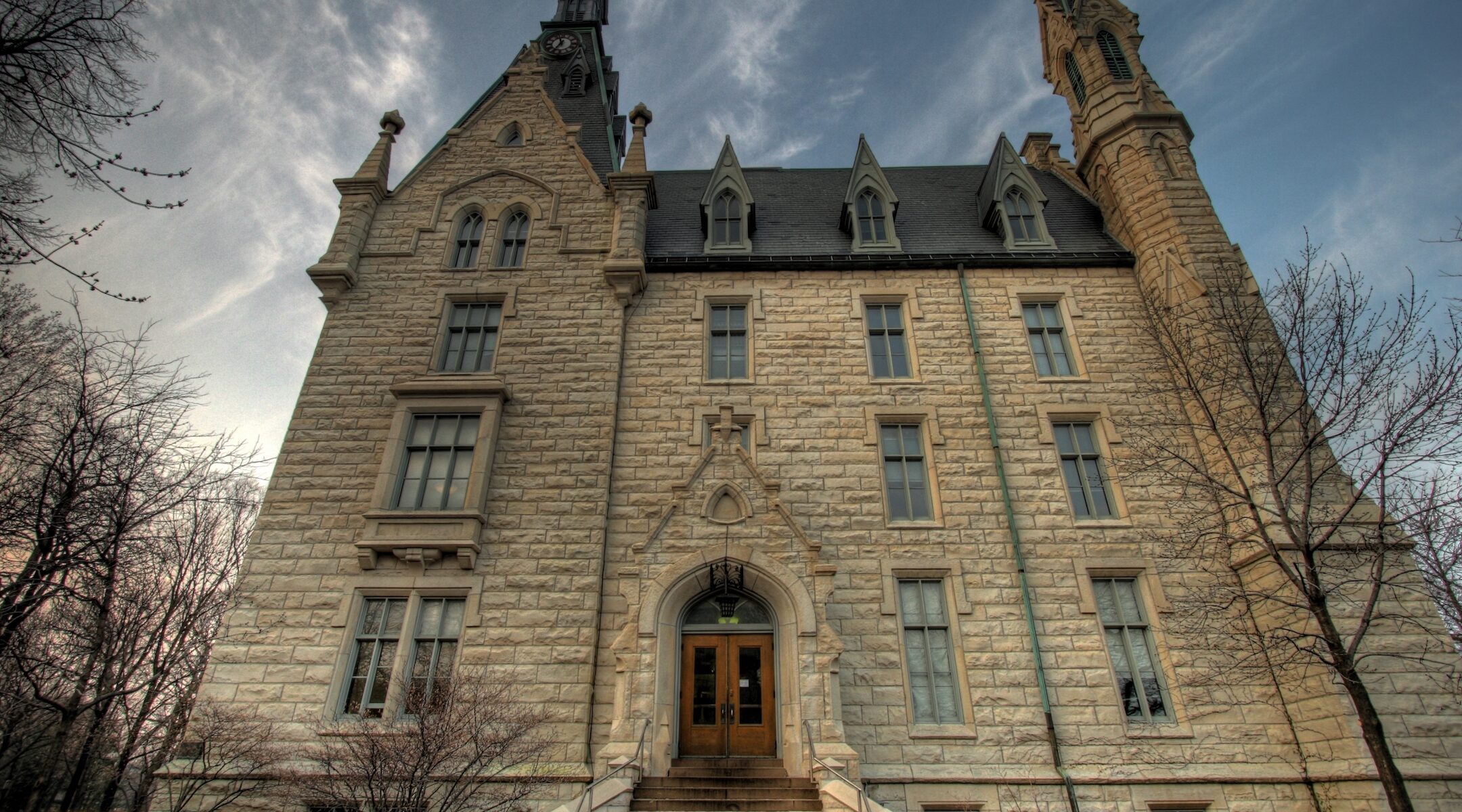 University Hall at Northwestern University, which responded to a complaint about hate speech against Bart van Alphen by telling the student to "reach out to Hillel," the Jewish campus organization. (Wikimedia Commons)
Advertisement

(JTA) — A Northwestern University neuroscientist who caused controversy with a series of racist, misogynist and anti-Semitic posts he wrote on social media has died by suicide.

Bart van Alphen, a postdoctoral fellow who studied sleep patterns, appears to have maintained multiple social media accounts under the name @The_Dr_Caveman that denigrated women, echoed far-right slurs and repeatedly called for the death and deportation of protesters, nonwhite immigrants and politicians whose views he opposed.

The Cook County Medical Examiner’s Office ruled his death Tuesday a suicide, according to the Daily Northwestern, which provided no further details.

Van Alphen also maintained a social media account under his own name that was seemingly devoid of explicitly racist content. That Twitter account has been deleted. So has the @The_Dr_Caveman Twitter account, though an account under the name @Dr_Caveman on the social media platform Gab, which is popular with the far right, remains active and is peppered with racist slurs and threats. The bio for that account reads “Neuroscientists for Trump!”

Van Alphen’s racist social media accounts were first exposed in October, according to the Chronicle of Higher Education. Northwestern was aware of van Alphen’s posts, but appears not to have taken action against him. A Twitter account called @BartVanCaveman dedicated itself to documenting the connections between van Alphen and his racist posts.

Multiple students at Northwestern told the media and said on social media that their complaints about van Alphen had gone unanswered by the school’s administration. In a tweet from December, one doctoral student wrote that he was told that the hate speech was “not credible” and that for further support, he should “reach out to Hillel,” the Jewish campus organization.

In the months after the complaints, van Alphen continued to work with students, according to the Chronicle.

The Jewish Telegraphic Agency has reached out to the university and has not received a response. The owner of the @BartVanCaveman account told JTA they did not want to comment in light of van Alphen’s death. A university spokesperson told the Chronicle that van Alphen’s posts were “racist, offensive, and inappropriate, and run counter to the university’s values” but that the school could not “silence someone based on abhorrent views alone.”

Van Alphen admitted to owning the racist accounts shortly before his death. In an email sent this week and obtained by the Chronicle, he wrote that the social media activity was “part of a subculture that traffics in dark, cynical humor.” He claimed that he was “not a Nazi or racist,” and that “I realize those words sound hollow in light of recent events.” Van Alphen also claimed that he was not violent or an extremist.

“I deeply apologize for the distress, fear and anger they have caused,” he wrote regarding his posts.

The email followed years of racist activity online. Van Alphen’s account on Gab features a slew of bigoted posts written between 2016 and 2019. The most recent, posted more than a year ago, reads “HBO’s Watchmen is just as pozzed you’d expect given its (((writer))). Whitey bad, whitey racist. N***o good, n***o noble.”

The triple parentheses, also known as the echo symbol, is used by far-right activists to identify Jews online. In tweets documented by @BartVanCaveman, van Alphen referred to young far-right activists using the term “Generation Zyklon,” a reference to the gas that Nazis used to murder Jews in the Holocaust.

Several other posts targeted Latino immigrants. One from March 2017 reads “Juan by Juan, the only way to deport them all.” In October 2018, he shared a post that read “Keep families intact. Deport all Third World families together.” He has also used variations of the N-word and other racist terms to refer to Black people.

On other occasions, van Alphen called for political opponents to be killed. Amid a series of posts about a 2017 election in the Netherlands, he wrote about a Muslim party, “They should be shot for treason.” In another post documented by @BartVanCaveman, van Alphen wrote, “let’s give Breivik a gun and Merkel a five-minute headstart.” The tweet is a reference to Anders Breivik, who carried out a 2011 mass shooting in Sweden, and Angela Merkel, the chancellor of Germany.

Regarding left-wing protesters, he has written, “Next time, shoot the ponchos on sight.” He also tweeted a call to “guillotine every last member of the” Chicago Teachers Union.

Aside from the social media posts, an anonymous author whose bio links to van Alphen’s @The_Dr_Caveman Twitter account wrote a series of posts for a site called Return of Kings, which publishes misogynist and anti-feminist content. The articles cast doubt on rape allegations and carry titles like “This accidental experiment shows the superiority of patriarchy.” The posts date back to 2014.