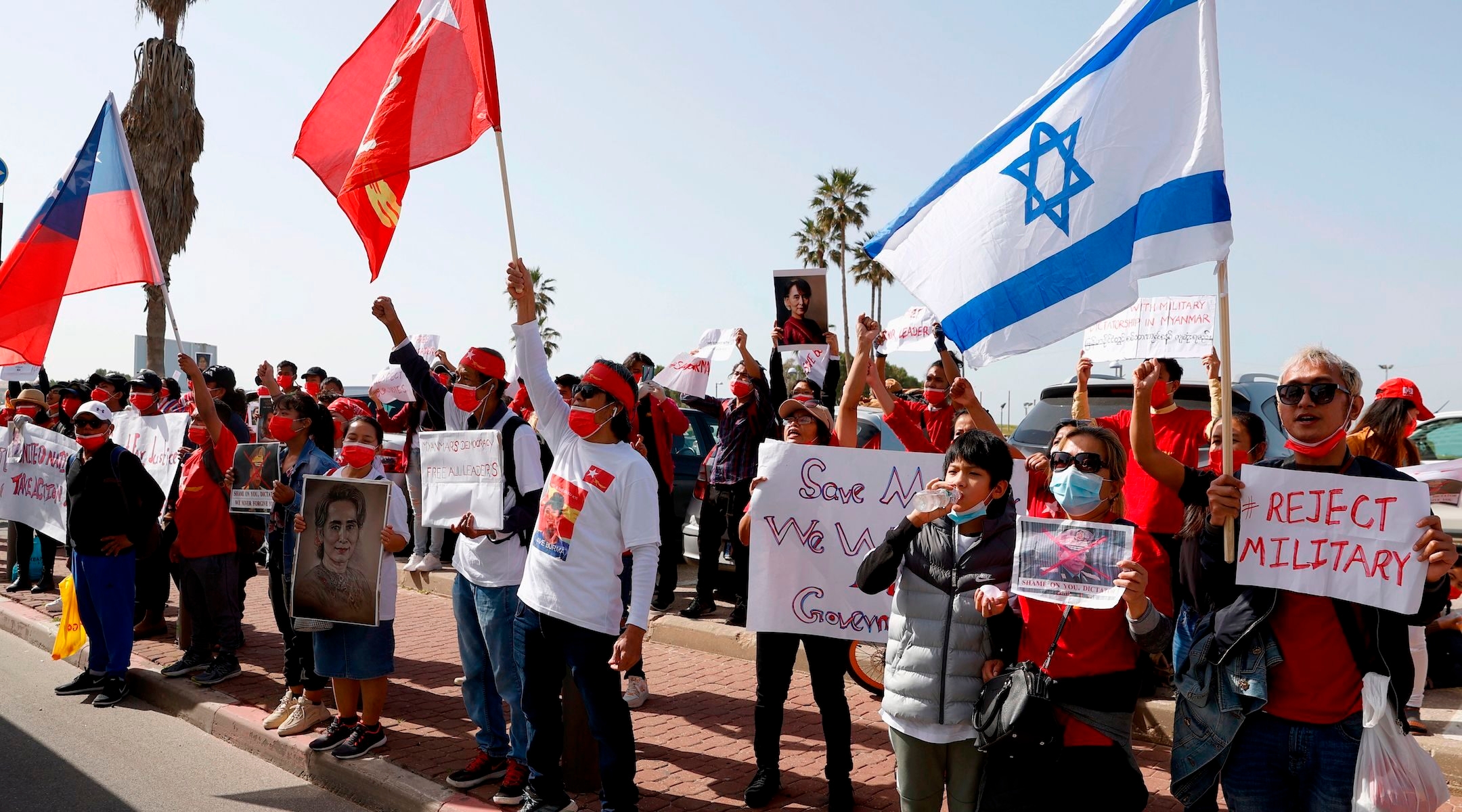 A group of Myanmar activists residing in Israel wave the historical flag of Burma (until 1974), the flag of ousted leader Aung San Suu Kyi's National League for Democracy party, and the flag of Israel during a protest outside the country's embassy in Tel Aviv against the country's military coup, Feb. 3, 2021. (Jack Guez/AFP via Getty Images)
Advertisement

(JTA) — A leader of Myanmar’s tiny Jewish community, reacting to the military coup that has rocked the nation, recalled witnessing “the brutality of the Military” in his Southeast Asian country in 1988.

“But since 2015, I never thought I or my children’s generation” would ever “witness this again,” Sammy Samuels wrote on Facebook. “But I was wrong.”

He called Sunday’s coup “A Sad Day for Myanmar.”

Samuels, who keeps the keys of Musmeach Yeshua synagogue in the nation’s largest city, Yangon, once known as Rangoon, has been instrumental in holding together the community of about a dozen families. Following in the footsteps of his father, Moses, Samuels has maintained the site as a haven for Jewish visitors and tourists.

The coup is the latest turn in Myanmar, formerly known as Burma, where the military took over the government and announced a yearlong state of emergency. The junta detained the democratically elected leader, Nobel Peace Prize laureate Daw Aung San Suu Kyi, on transparently thin criminal charges, put up roadblocks, suspended communications and closed down the airport.

The action ends nearly a decade of fledgling democracy in Myanmar that saw the country become a popular tourist destination. And it throws into relief a history of colonial and post-colonial turmoil.

Several thousand Jews thrived there when the country was under the mantle of the British Empire. Musmeach Yeshua, which means “brings forth salvation,” was built in 1854 and rebuilt in 1896. The oldest tomb in the nearby Jewish cemetery dates back to 1876.

British rule ended when the Japanese bombed Rangoon on Christmas Day, 1941, and invaded the country at the outset of World War II. Many Burmese Jews fled to India and never returned. 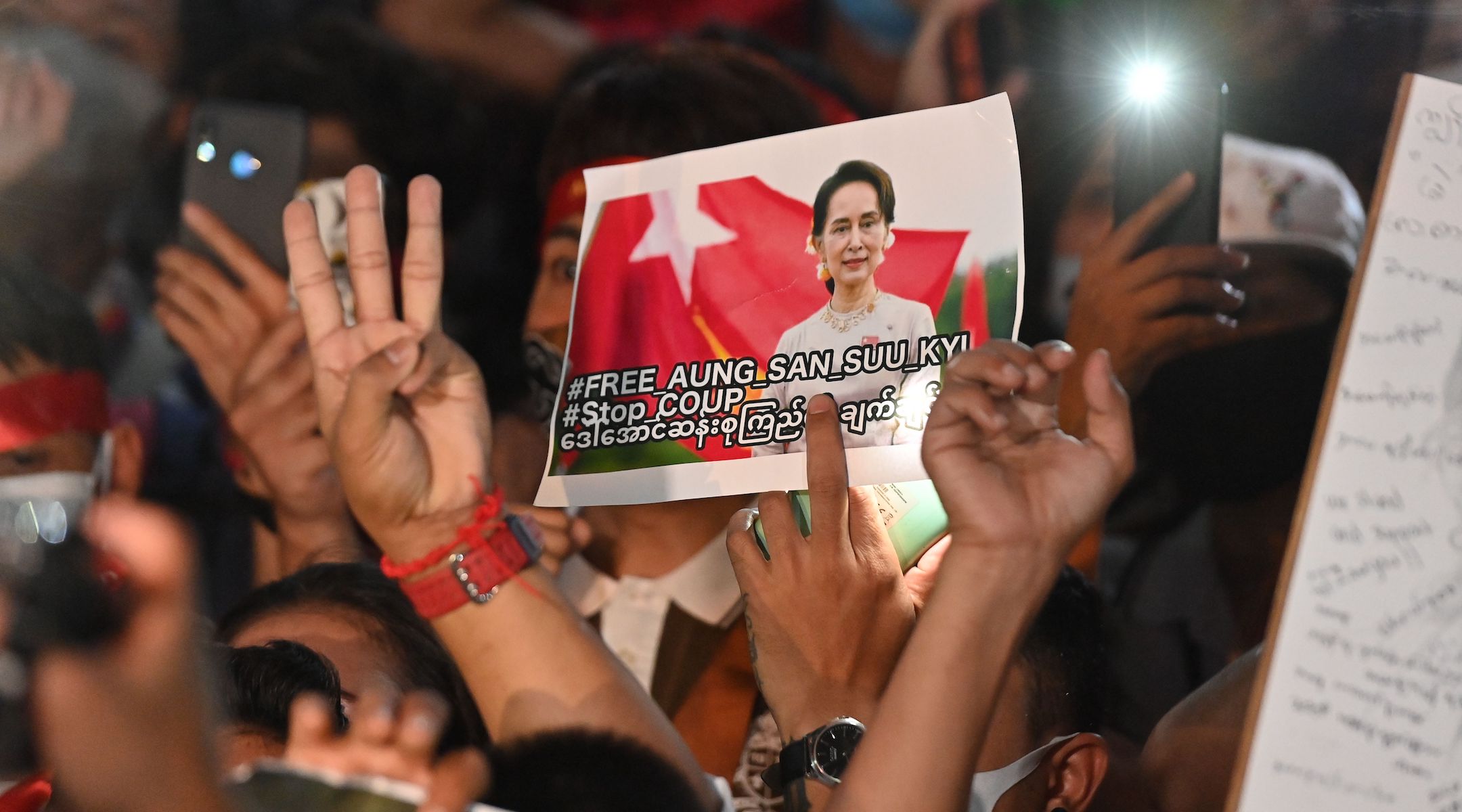 A protester holds an image of the detained Myanmar civilian leader Aung San Suu Kyi during a demonstration condemning the military coup outside the Myanmar Embassy in Bangkok, Thailand, Feb. 4, 2021. (Mladen Antonov/AFP via Getty Images)

Burma achieved independence in 1948 and established cordial relations with the new State of Israel, mostly due to the friendship between prime ministers, David Ben-Gurion and U Nu. The latter was the first head of state to visit Israel after its birth. A warm relationship exists between the two nations, including Israel selling arms to Myanmar over the years, according to reports. Israel aided Myanmar after Cyclone Nargis in 2008.

In 1962, a brutal military coup that installed a dictatorship took place. The military nationalized businesses, causing most Jews to emigrate. The army suppressed freedom of speech and political parties, and the country fell into economic ruin. The army jailed or kept in house arrest Suu Kyi, the daughter of a beloved independence leader. Tourists were advised not to mention her name; guides never did. She spent nearly 15 years in detention between 1989 and 2010, when she was released.

Suu Kyi emerged from house arrest and in 2015 her party, the National League for Democracy won a decisive election victory. The military honored the results and Suu Kyi appeared to be the de facto national leader. She played a vital role in Myanmar’s transition from military junta to partial democracy in the 2010s, though she was condemned internationally for defending the military campaign — labeled a genocide by human rights groups — against the Rohingya minority.

In 2006, Samuels and his father founded Myanmar Shalom, a boutique travel company. They designed and arranged tours that included Buddhist stupas, Hindu temples, Christian churches and Muslim mosques, along with the last remaining synagogue and cemetery.

After his father died in 2015, Samuels, in his late 30s, has represented the Jewish community at interreligious councils and often met with Suu Kyi on matters of interfaith dialogue. Samuels had graduated with high honors from Yeshiva University and worked at the American Jewish Congress in New York. Returning to Yangon, he organized Hanukkah candlelighting ceremonies that often drew several hundred government leaders.

For these few Jewish locals and the Jews working at the American and Israeli embassies, the synagogue stands as the focal point for Jewish travelers and conveys a message to the world: “We are still here.”

Usually no one shows up for a daily minyan, though a minyan frequently does take place — either the result of someone having to recite a memorial prayer, or when a small group of American, Israeli or Australian Jews arrive during the tourist season. When that happens, Samuels frantically calls the few Jews in the city to come quickly to the synagogue and meet the guests in the building, one of 188 sites on the list of Yangon heritage structures. 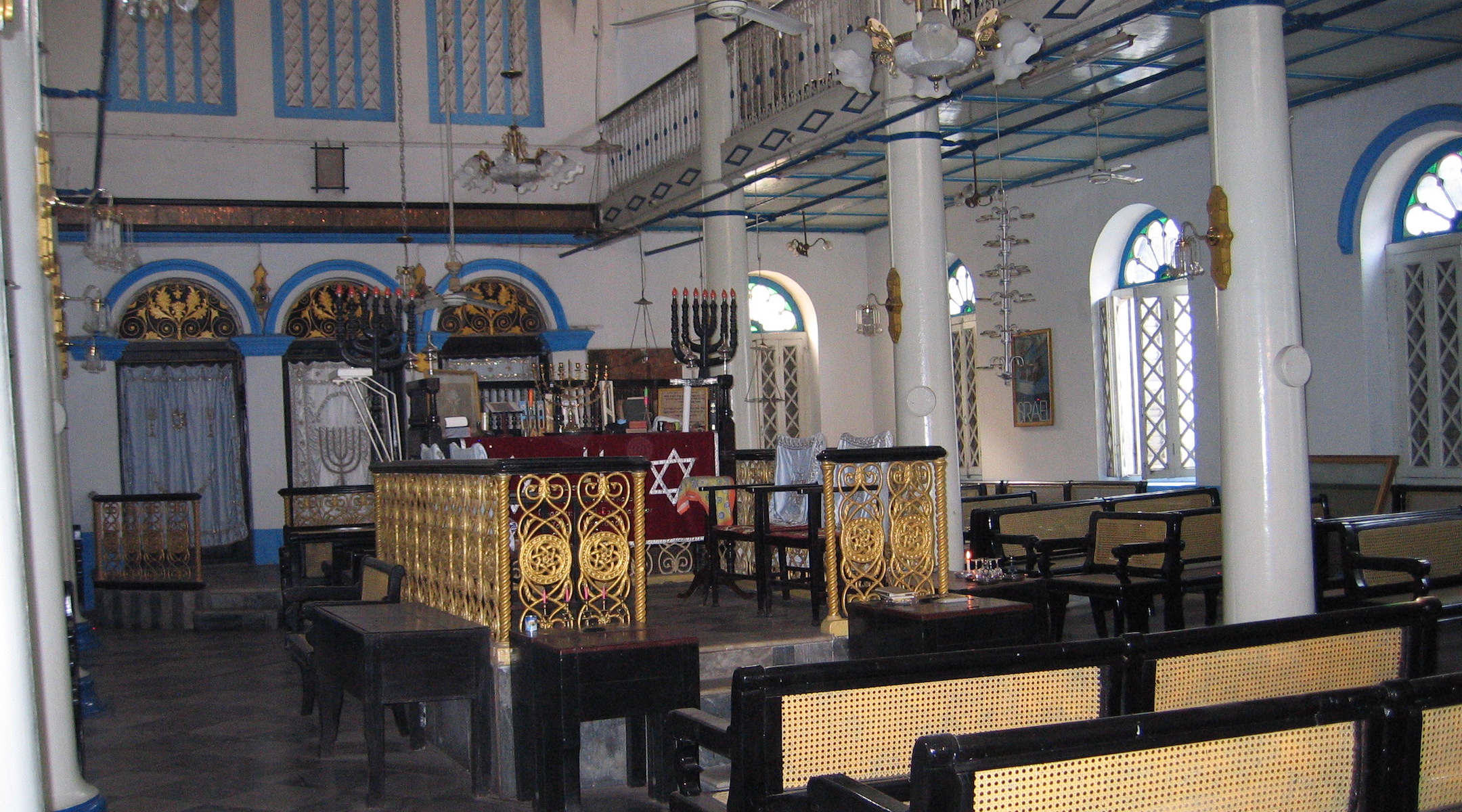 The two-story, white stone synagogue is located at No. 85 26th St. At the main street entrance, visitors can see above the walls an archway with a seven-branched candelabra. Inside that wall sits a Jewish star. The bimah, surrounded by wooden benches, stands in the middle of the sanctuary ,which features a balcony. Over the years, the Samuels raised funds to paint and keep the house of worship in good repair.

An international outcry to sanction the military over takeover is growing. Whether tourism rebounds after the pandemic recedes may depend on whether the military pulls back or the world forgets.

In 2019, when global outrage about the treatment of the Rohingya was building, Samuels told the Jewish Telegraphic Agency about the related decline in tourism.

“A lot of people start to boycott traveling to Myanmar, but when we say tourism, it’s not just about us, a tour company, or the hotel or airline. It involves the tour guide, taxi driver, hotel bellman,” he said. “They should not be punished for what happened.”